How should Edmonton’s defensive pairs look at full-strength? By NHL_Sid
1 year ago
Over the past few games, Edmonton has faced numerous injuries to their defence corps. Darnell Nurse would be out for 2-3 weeks with a broken finger after blocking a shot against Winnipeg last Thursday. Slater Koekkoek was also injured in that same game. In addition, Duncan Keith left mid-way through the game against Dallas last Tuesday with an upper-body injury.
As a result of Nurse and Koekkoek’s absence, Philip Broberg was called up from Bakersfield, and he’s had an excellent first three games to his NHL career.
Paired primarily with Cody Ceci, shot attempts have been 54/29 and scoring chances have been 21/10 with that duo on-ice so far. During Edmonton’s win last Sunday against Chicago, Broberg also picked up his first point, an assist on Ryan McLeod’s goal.
Broberg’s excellent start to the season makes the conundrum with the defensive pairs a lot more interesting; Should Broberg be the left defenceman on the 2nd pair moving forward? Should Edmonton still target another left-defenceman at the deadline? Or should Edmonton try to look for a right-defenceman instead?
In this piece, I’ll be answering these questions, while also diving into who should play alongside Darnell Nurse on the top pair when he returns.
*all stats via Natural Stat Trick unless stated otherwise

Edmonton should stick with Broberg at 2LD for now

It’s fine to be wary of Broberg’s excellent start to his NHL career so far. After all, it’s merely been three games. Edmonton hasn’t been exactly playing against contenders either, with teams like Arizona and Chicago making up Broberg’s opposition so far.
At the same time, I like to refer to the saying,“If it ain’t broke, don’t fix it.”

Again, it’s important to keep in mind the sample size (which is why I included the TOI column on the visual above), but the pair of Broberg – Ceci has performed much better than the pair of Keith – Ceci so far.
The duo of Keith – Ceci had an extremely strong start to the season, with a 60% goal differential and a 62% expected goal differential in their first 4 games. However, the pair have begun their decline, posting a 45% goal share and 47% expected goal share ever since. The 2nd pair requires a change in some way or the other, and perhaps Broberg could be the solution to that issue.
Keith has been better than I expected prior to the season. Yet, it’s also worth mentioning that no Oiler player has been on-ice for more 5v5 goals against than him and Ceci. I’ve liked Keith’s passing, but I still feel that zone denials are one of his most significant weaknesses. On the contrary, entry denial has been one of Broberg’s largest strengths so far in the three games he’s played in.
In my mind, Edmonton should continue to deploy Broberg on the 2nd pair for the time being, at least until/if Broberg struggles and can’t sustain his play over a broad sample in a top 4 role.

Barrie vs Bouchard on the top pair

I wrote a few weeks back on how Edmonton would be at their best when Evan Bouchard is deployed on the top pair. However, even though I believe that Bouchard is by far the superior defenceman at even-strength, I’ve started to feel that playing Barrie with Nurse may not be a terrible decision. Let me explain.
Playing Bouchard on the top pair obviously results in Barrie on the 3rd pair, but he’s struggled in that role. In terms of scoring chance share, both the pairs of Russell – Barrie, and Koekkoek – Barrie have placed in the bottom 20 in the league for defensive pairs with at least 30 minutes played. If Edmonton deploys Keith on the 3rd pair when he returns, a Keith/Barrie pair could be a recipe for disaster, as neither player is strong in their own end.
Especially keeping in mind that Edmonton’s bottom-six needs to see more improvement, the struggles of their 3rd pair can’t persist. As a result, perhaps the best decision is to keep Barrie on the top pair, where he can hide his defensive shortcomings behind Connor McDavid’s play. Meanwhile, Evan Bouchard on the third pair helps the bottom six.
With that said, even though both Russell/Barrie and Koekkoek/Barrie have struggled, perhaps Edmonton could at least give Keith and Barrie a shot together.
There’s a very plausible chance that pair also performs poorly, and in that scenario, I’d deploy Bouchard on the third pair like I previously suggested. However, there is still a possibility that the duo could at least tread water if given the chance, especially if Dave Tippett shelters them. I think there is a chance that the pair could even shine offensively with the right deployment.
Either way, I believe there are various advantages and disadvantages to playing either Bouchard or Barrie on the top pair.

Should Edmonton consider adding or moving a defenceman at the deadline?

Edmonton could use assistance at every position; a forward to help the bottom-six, a goaltender, and a left-defenceman and/or a right-defenceman to improve defensive depth.
If Broberg’s current performance sustains, the need for a left-defenceman would substantially decrease.
As for the situation with the right-defencemen, I feel that Edmonton should consider moving Tyson Barrie. It’s evident that McDavid and Draisaitl are the primary play-drivers on the power play, and we’ve seen Edmonton’s PP have success without Barrie in 19-20. I feel that Bouchard can effectively take over the PP quarterback position.
In addition, Barrie is just not a great fit for a team that already has defensive struggles, especially when you already have a younger, and more well-rounded RD in Bouchard. McDavid sees a decrease in his goal share, points/60 and expected goal share with Barrie on-ice, while the exact opposite occurs when McDavid is on-ice with Bouchard.
Due to Barrie’s high production totals, Edmonton could obtain some value back coming the other way. A potential idea is to add some other pieces alongside Barrie, and acquire several pieces the other way, including a defensively stable 3RD as his replacement. A strong, two-way 3RD could prove to be beneficial for Keith if he plays on the third pair, while it also allows Bouchard to maintain his spot as the team’s top right-defenceman.
I’m just spitballing here, as there’s a vast variety of solid options for Edmonton at the deadline. But adding some defensive depth should be pretty high on Ken Holland’s to-do list. 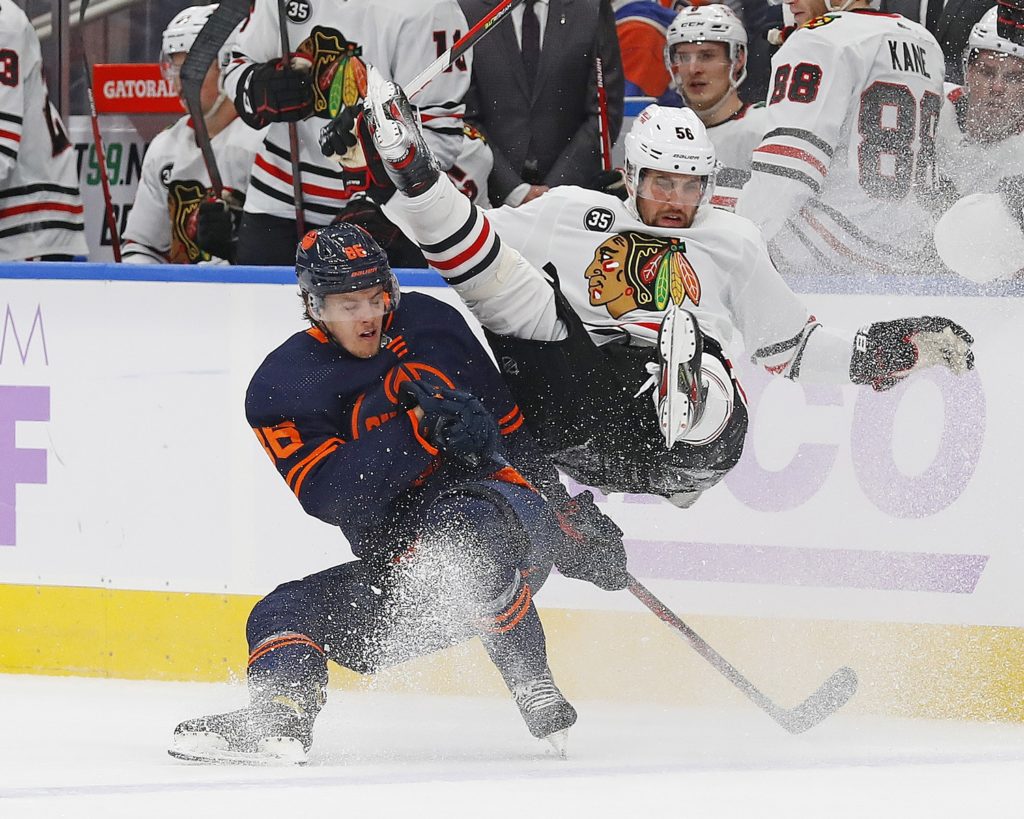 Nov 20, 2021; Edmonton, Alberta, CAN; Edmonton Oilers defensemen Philip Broberg (86) checks Chicago Blackhawks defensemen Erik Gustafsson (56) during the third period at Rogers Place. Mandatory Credit: Perry Nelson-USA TODAY Sports
Broberg will have a big challenge tonight during Edmonton’s game against a Vegas team that’s gradually returning to full health. He’ll be playing large minutes again, and hopefully, his strong play persists.
The various possibilities on how Edmonton’s defensive pairs look at the end of the season do heavily rely on Broberg’s play after all. They also depend on how well a Keith/Barrie duo would perform.
Edmonton still remains a substandard team at 5v5, as they’re currently -4 in terms of goals, and are marginally a net positive in terms of scoring chances. A large reason for that is due to their poor defensive play. Edmonton’s defensive pairs have a lot of room to improve, and hopefully, they do. What are your thoughts? How do you think Edmonton’s defensive pairs should be shaped at full health?
Find me on Twitter (@NHL_Sid)

Looking to upgrade your wardrobe or get a head start on your Christmas shopping? The 2021 Blackout Collection is exactly what you need in your life. These designs are only around for a short time, though, so don’t wait if you’re hoping to score something — once they’re gone, they’re gone. Shop the blackout collection here.
Nation Takes
Oilers Talk
Recent articles from NHL_Sid