By Robin Brownlee
1 year ago
Even when NHL officials actually take the whistles out of their pockets, they make the wrong call far too often. Such was the case last night with the embarrassing goaltender interference penalty called against Brayden Point of the Tampa Bay Lightning in 4-2 win over the New York Islanders.
As brutal as that call was, the real problem the NHL has to get sorted out, and fast, is that too many referees are managing games rather than calling rulebook infractions that are there for all to see, especially those committed against the elite players fans want to see. Connor McDavid of the Edmonton Oilers is Exhibit A, but he is far from the only example.
McDavid didn’t draw a single call in four games against the Winnipeg Jets this post season or in four other games in a play-in series against the Chicago Blackhawks last season. Zero. None. In 21 career playoff games McDavid has drawn just six calls. He, like other stars — Nathan MacKinnon, Auston Matthews, to name just two — have too often been left to fight through hooks and holds and all means of interference while referees let clutching and grabbing opponents suck the skill and the life out of the game.
Unlike the NBA, which showcases its marquee players by letting them perform without lesser opponents bending and breaking the rules to get in the way, the NHL has shown no such inclination to do likewise. I’m wondering, though, if we’re going to see a shift in that, a re-set, in the wake of the new television deals the NHL has signed in the U.S. for next season and beyond. In the entertainment business, stars sell. 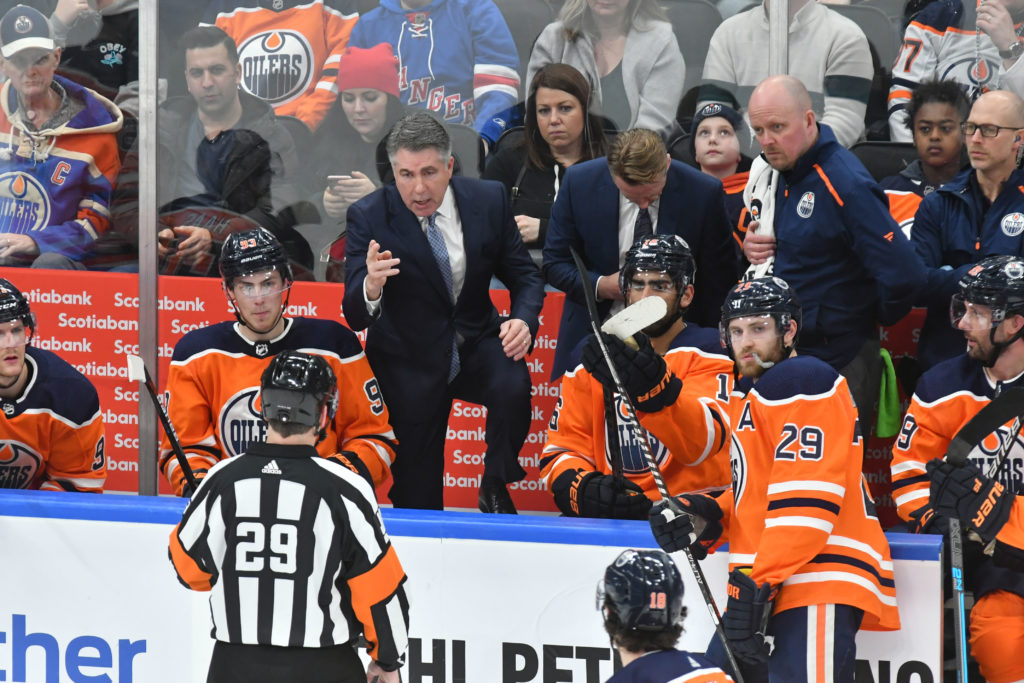 Dec 31, 2019; Edmonton, Alberta, CAN; Edmonton Oilers head coach Dave Tippett is seen out on the players bench talking with Referee Ian Walsh (29) as they played the New York Rangers during the second period at Rogers Place. Oilers won the game 7-5. Mandatory Credit: Walter Tychnowicz-USA TODAY Sports
Ken Campbell wrote about the NHL’s failure to let its stars shine in The Hockey News May 28. Some observations by Rachel Doerrie, a former consultant with the New Jersey Devils, now completing a degree in sports science and analytics at York University, about uncalled infractions against McDavid stood out in that piece for me. These are snippets. For full context see the article.
“She watched each of McDavid’s shifts in isolation during the series against the Jets and counted no fewer than 37 — more than nine per game — that could have been called penalties,” wrote Campbell. “She did the same thing with each shift McDavid played in the NHL last season and said there were an average of three blatant infractions per game committed against McDavid.
“There were three egregious instances of penalties per game,” Doerrie said. “I’m talking, he’s getting tackled, he’s getting the stick slashed out of his hands, he’s getting hooked, getting interfered with. Interference was the biggest one. I counted 2.96, so basically three per game.”
This isn’t breaking news. The best players in the NHL have been subject to rodeo rules — you might recall Mario Lemieux calling the NHL a garage league in the 1990’s — forever. Whether we’re talking McDavid or MacKinnon, Sidney Crosby or Wayne Gretzky, not much has changed. And in the playoffs? Worse yet. The thing is, this isn’t about special treatment for star players. It’s about consistently enforcing the rulebook. If that’s the mandate, the best players will draw the most penalties.
My guess is the new seven-year U.S. TV deal the NHL just inked with Turner Sports, reportedly for $225 million a year, and a $410-million a year package with Disney and ESPN in a shift away from NBC, will at some point play into a discussion about pumping up the star power and expanding the brand. Letting the best players be the best players will play a big part in that. That’s what fans want. That’s what sponsors want. Where there’s a will, there’s a way.

It really doesn’t matter if you’re an Oilers’ fan cheering for McDavid, a Colorado fan yelling about MacKinnon or a Maple Leafs’ backer in a Matthews jersey, it’s in the best interests of everybody right across the NHL to shift away from the game management officiating model we’ve been subjected to. That’s especially true with fans getting back into buildings around the league as COVID restrictions ease.
The NHL needs to up its entertainment game and have its best players on the ice in the playoffs instead of on the golf course, as has been the case this post-season. Get on with it already.