Looking ahead at a busy July in the NHL By baggedmilk
1 year ago
Now that the Stanley Cup has been handed out and the 2021 season has officially wrapped, we’re drawing nearer to a very busy time in the NHL and one that I am endlessly excited (and nervous) about. But before we dive into what will surely be a busy month, I think it’s important to put together a schedule that we can follow to make sure we’re all on the same page.
Normally by this point in July, the NHL Draft is already in the books and the initial excitement of free agency has started to die down a bit, leaving us with an extended wait until the new season begins. Here in 2021, however, COVID is still ruining and adjusting the usual timelines en masse and that means we’re in store for one of the busiest Julys that we’ve ever seen around here. And for Ken Holland and the Edmonton Oilers, these next three weeks are going to be huge for the franchise because they will likely set the tone (and roster) for what next season might look like. Haven’t been keeping up on the dates? I’m here to help.

This buyout period is going to be very interesting for the Oilers because there are a couple of guys on the roster whose names have been thrown around as likely candidates for weeks now. If it’s James Neal, a buyout will see the Oilers carrying a $1.916 million cap penalty for the next four years, not an ideal way to spend the cash that should go towards bolstering the team’s depth. But if Neal sticks around and is a healthy scratch again, that’s not a great way to spend the $5+ million either. If Mikko Koskinen gets bought out, the Oilers will be on the hook for $1.5 million in cap penalties for only two years compared to four, which might actually be the first step to what comes next between the pipes. Either way, it’s going to be fascinating to see whether or not Ken Holland will choose to take this route with either of these two guys that are clearly not in the long-term plans.

If the Oilers going to run with the 7-3-1 expansion as has been the word over the past few weeks, I decided to take a run at what my list would look like under those parameters. Frankly, I had a hard time protecting seven forwards in this mock scenario and I really wish Klefbom was healthy, but in spite of the difficult choices, I think I put together a list that I can be proud of showing to the Internet: 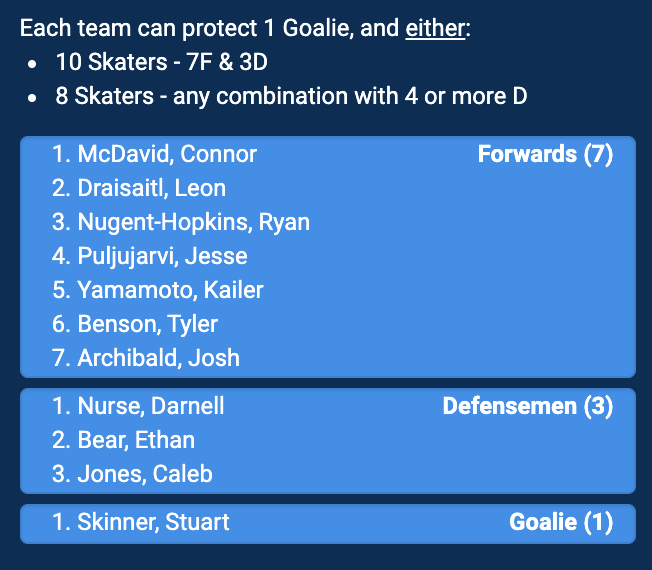 Come at me, comments section.
If you want to make your own list, you should go check out PuckPedia’s expansion tool and see what kind of protected list you come up with.

Last weekend, I wrote my 5 Bold (or not) Off-Season Predictions and placed my bet on either Caleb Jones or Tyler Benson getting grabbed by Seattle, and I’m going to stick with those picks, but I could also see a scenario where Holland makes a deal for Seattle to take on an unfavourable contract. I know it’s a long shot but I’m still going to hope for the best anyway. Dare to dream? I’m a dreamer. What will also be interesting is seeing whether or not the GMs around the league learned anything from what happened in the Vegas expansion. How many trades will we see? Will teams want to trade with each other rather than involving Seattle in their ideas? We shall see.

I can’t be the only one that has absolutely no idea who the Oilers are going to pick at 19th overall at the upcoming entry draft, can I? Frankly, I just learned about where we’re slotted in the order yesterday, which means that I’m running out of time to figure out what kind of names are floating around that spot. Are there forwards that make sense? Defence? Would that goalie from the Oil Kings still be around? Would you even take a goalie in the first round? Frankly, the fact that I have absolutely no idea what I’m talking about, what’s going on, or even who is supposed to go first overall this year is almost a blessing after years and years of lottery parties, but now it’s getting close to crunch time and we have to get our thinking caps on. We’re picking at 19th overall, eh? Klefbom was taken at 19th overall, so that means this new kid better have the same level of abs or better — that’s the criteria, as far as I know. Either way, the Oilers only have picks in the first, fourth, sixth (x2), and seventh rounds this year.

What the Oilers do in free agency is going to be one of the most interesting storylines to follow this summer because it’s really the first time that Ken Holland has really had any space to work with in terms of bolstering the lineup. In the past, he’s signed an array of scratch tickets for the bottom six in the hopes that something would stick, but the expectations are much higher than that this year and I’m both nervous and excited to see how this goes. That said, even with about $17 million to work with, that pool of available cash will run out quickly if the GM overpays on any combination of free agents and our own pending RFAs.
Nation Takes
Oilers Talk
Recent articles from baggedmilk