Looking at Oilers Player Props For This Season By Tyler Yaremchuk
1 year ago
Earlier in the week, I took a look at some different ways that you could bet on the Oilers before the season starts. From betting on them to win the Stanley Cup to how many points they could get this season, there were plenty of different ways to go about laying some coin on the Oilers.
Now I want to shift my focus to some individual player props that have caught my attention for the upcoming season. Here are a few that I found particularly interesting

Article brought to you by PointsBet Canada

I love the over here. The pace that McDavid scored at last season works out to almost 154 points in an 82 game season. Yes, he won’t have the luxury of beating up on the Ottawa Senators nine times, but the Pacific Division is not that good and there will still be plenty of games where he goes off for a handful of points. Even in 2019-20, he scored at a 124 point pace.
The addition of Zach Hyman will be huge as well. The duo has looked great in the preseason and I think Hyman is a perfect fit for that top line. It’s also worth noting that Jesse Puljujarvi has looked like he’s primed to take another step forward this season.
The Oilers ‘powerplay will likely still be dominant, McDavid has consistent linemates, and he’s playing in a weak division. I think McDavid has a great chance to break the 150 point mark this season, so if he stays healthy, he should easily cover 128.5.

This honestly might be the prop that I’m most confident in. Puljujarvi posted 25 points in 55 games last season. That’s a 37 point pace over an 82 game season. Puljujarvi should play in the Oilers’ top six all season and based on what we’ve seen from him so far in the preseason, I think it’s reasonable to expect him to be in the 40-55 point range this season.
Hitting the 20 goal mark certainly isn’t out of the question for Puljujarvi (the line for goals is set at 17.5) and if he hits that, then he should get to 37 points rather easily. I love this bet and out of the five that I highlighted in the article, this one is the one I’m most confident in. 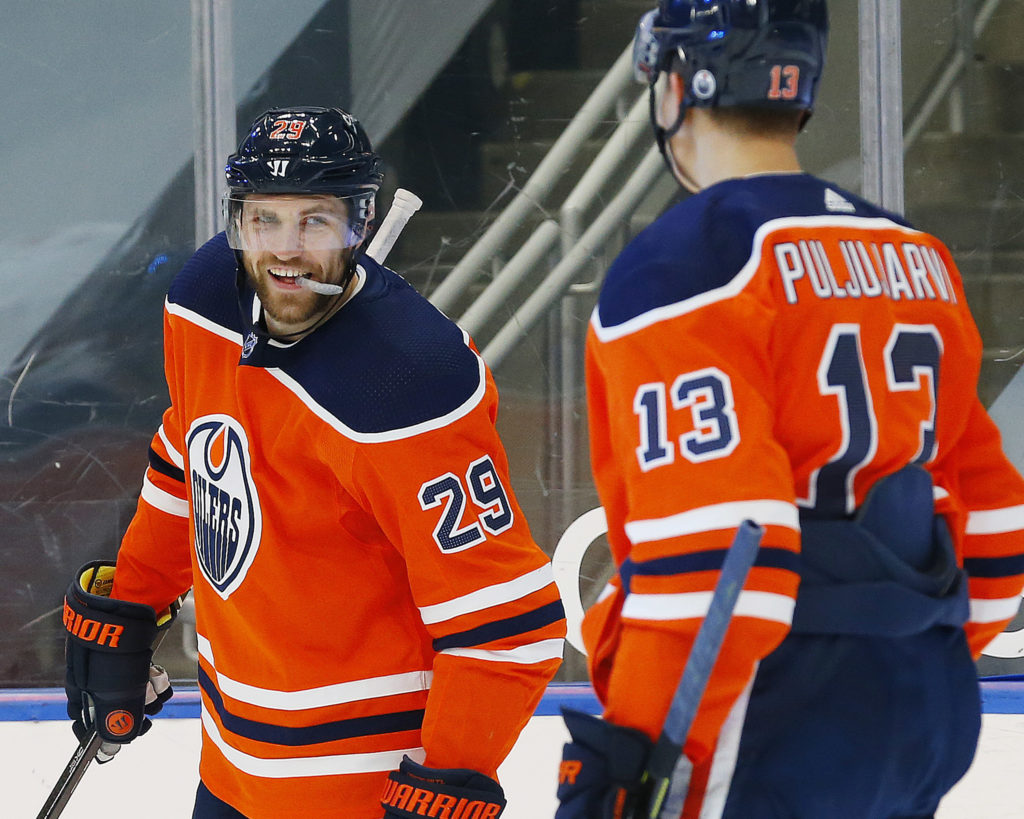 Mar 10, 2021; Edmonton, Alberta, CAN; Edmonton Oilers forward Leon Draisaitl (29) celebrates his third period hat-trick goal against the Ottawa Senators at Rogers Place.
This is actually a spot where I might be leaning towards the under. The line is set at a very interesting spot considering that over the last three seasons, he’s averaged 48 goals per 82 games played. That does include his 50-goal campaign back in 2018-19 though.
This is a tough one though because the amount of goals he scores is pretty closely tied to how much he plays with Connor McDavid. Over the last three seasons, he’s played 1888 even-strength minutes with McDavid and 1595 without him. With McDavid, his individual GF/60 is 5.02 and without McDavid on his line, it drops to 4.07 (via NaturalStatTrick).
Draisaitl is one of the best players in the game, but if he doesn’t play with McDavid as much as he has in the past, then I’m not sure if he can score 47 goals. It’s just a very high number.
The Oilers’ wing depth is much better than it has been in previous seasons and I think that could leave Dave Tippett to keep McDavid and Draisaitl on separate lines. 46 goals is a lot and while I think Draisaitl could crack 40, getting past this number might be tough for him this year.

This is another spot where I think the books are underestimating what an Oilers forward can do this season. Hyman put up 33 points in 43 games last season, which works out to over 60 points over an 82 game season.
He’ll likely be riding shotgun with either McDavid or Draisailt all season and he’ll also be the main net-front presence on the Oiler’s powerplay. He’ll produce and I don’t think expecting him to get 25-goals and 25-assists is a big ask. That should be his floor in my opinion.
Now, Hyman has never hit the 50-point mark in his career but the main reason for that has been health. He’s missed time in each of the last two seasons. If he stays healthy, then I have no doubt that he will crack the 50-point plateau and honestly, I’d be a little disappointed if he doesn’t hit the 60-point mark. Basically, you’re betting on Hyman staying healthy for close to the entire season. If he plays 70-82 games, then I’m pretty confident in his ability to get to 50 points

This was a tough one for me. He’s coming off a down year where he only scored 35-points in 52 games. He should produce more than that and he did post at least 60 points in each of the two prior seasons, so I think he’ll get close to the 60-point mark again.
He should ride shotgun next to Leon Draisaitl for the majority of the season and he’s locked in on the teams’ top powerplay unit. There are plenty of reasons to really like his chances of hitting the over here. I’m 50/50 on this one though. I think the over is the smart play here but I’m not as confident in this one as I am in the Connor McDavid, Zach Hyman, or Jesse Puljujarvi bets.

Article Brought to By PointsBet Canada