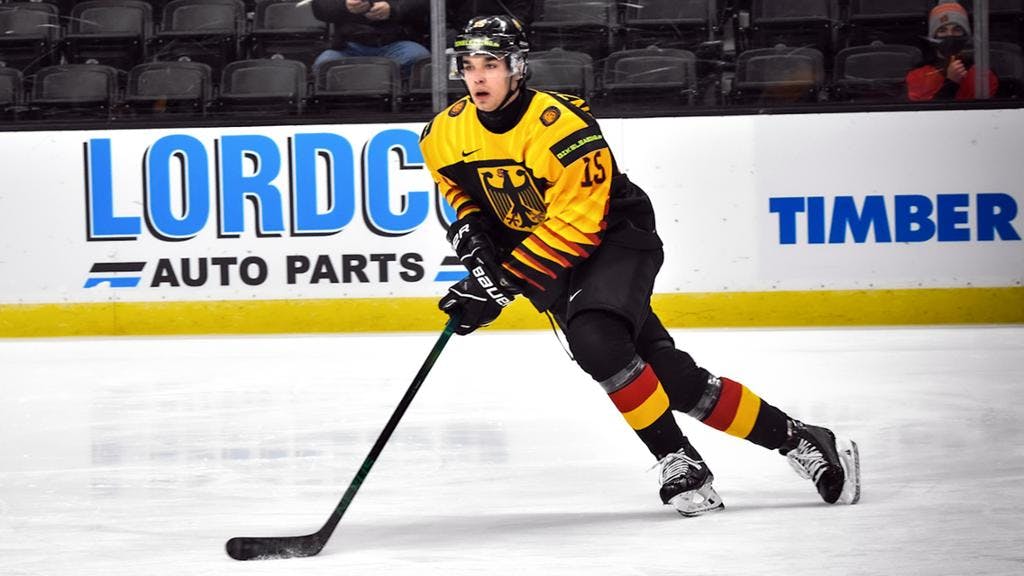 By Liam Horrobin
11 months ago
Luca Munzenberger shocked most draft experts last summer when the Edmonton Oilers selected him 90th overall. Most didn’t have him on their draft boards, but clearly, Edmonton thought highly of the young German defenceman.
He’s a 6’3, 198 lb, who was playing in Germany with Kolhner Junghale U20s. Munzenberger had played in Canada before specifically in Edmonton with Team Germany at the World Juniors.
One year later, Munzenberger is back in Edmonton representing his country; however, this time around, he’ll have a few more eyes on him as Oilers fans want to know what they got with their 2021 third-round pick.
Yesterday against Finland, Munzenberger made a good first impression grabbing the German’s only goal of the game in the second period and was named player of the game. The sea parted for him, giving him an open shot in the slot.
“Alex Blank had the puck and tried skating through a few guys then the puck, and then he lost it, and the puck came back to me”, said Munzenberger in his post-game availability. “I saw the lane open and just fired the puck”.
That goal was his first since coming over to North America from Germany. Munzenberger is a freshman at the University of Vermont in the NCAA where his role is much different to how he’s asked to play for Germany.
In Vermont, the Oilers’ third-rounder hasn’t contributed much offensively with only two assists in 15 games. However, when you watch him play, you’ll realize he has much more to offer in that area of the game.
“I would say that I’m a young player in Vermont, but I’m still getting a lot of ice time”, commented Munzenberger about his role in college compared to the national team.
“Defensively, my role is pretty similar compared to Vermont and the national team here, but in the national team, and we’re juniors here. I also get the chance to play offensively a lot more. I’m on the powerplay, for example, and I’m just playing on the PK and five on five in Vermont.”
In general, the Dusseldorf native is a raw talent. College was a good choice for him, giving him ample time to grow into the player he can be. His head coach in Vermont is Todd Woodcroft, the brother of Bakersfield Condors Head Coach Jay Woodcroft. Munzenberger will likely go from one Woodcroft to the next before we see him play a minute in the NHL.
For now, Munzenberger has a game against Czechia tonight as Germany look for their first win at this year’s World Juniors.
Nation Takes
Oilers Talk
Recent articles from Liam Horrobin