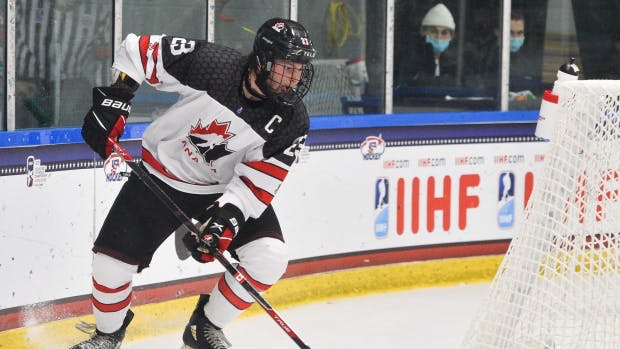 By Liam Horrobin
1 year ago
It’s never the greatest idea to make assumptions after one game, let alone an exhibition game. However, Mason McTavish made a great impression in Canada’s 6-4 win over Russia in their lone pre-tournament game.
McTavish tucked in two goals on Thursday night and then grabbed an assist on Kent Johnson’s goal in the first period. His second goal was excellent, showing great composure and confidence to drag the puck around Yaroslav Askarov and tape it home.
Canada is an offensive juggernaut. We all know that. We’ve heard about Cole Perfetti, Shane Wright and Connor Bedard a lot leading up to the tournament, and rightfully so, as they are all exceptional players. However, did we forget that McTavish was a third overall pick? He’s the highest-drafted forward on the Canadian roster, and his name has barely been spoken.
McTavish has a knack for scoring goals at every level. He scored twice in nine games during his brief time in Anaheim, the first coming on opening night against Winnipeg. McTavish even did it for Canada earlier this year too. At the World Under 18s, he scored 5 goals and 11 points as he captained his country to their 4th U18 championship.
After a brief stint in San Diego with the Gulls, the Ducks eventually sent him back to junior. With the Peterborough Petes, McTavish continued right where he left off with five goals in four games. In 64 games in the OHL, the Ducks first-rounder has 31 goals. It’s important to remember that 26 of those goals came as a rookie two years ago since he had to play his draft year in Switzerland due to the OHL shutting down.
The point is McTavish scores goals which make you think that he’ll score at critical points for Canada throughout the tournament. He doesn’t need to lead the World Juniors in points either to have a chance to win the MVP. Three out of the last five winners didn’t even finish in the top five in the points race.
The ease of the schedule is going to help him out too. Of course, you don’t want to underestimate your opponents but playing Finland, Germany, Czechia, and Austria is much easier than the US, Sweden, Russia, Slovakia, and Switzerland. With that being said, McTavish didn’t have any issues on Thursday night, scoring against arguably the best goaltender in the tournament in Yaroslav Askarov.
McTavish has the skillset to help lead Canada to victory. It’s early days but let’s not underestimate what McTavish is capable of. He’s already built up great chemistry with his linemate Kent Johnson, he has a habit of scoring goals, and the way Canada’s schedule is lining up, he could put on a clinic this year. He’s a name that fell under the radar and he needs to be spoken about in the same breath as the elite players at this tournament.
Nation Takes
Oilers Talk
Recent articles from Liam Horrobin