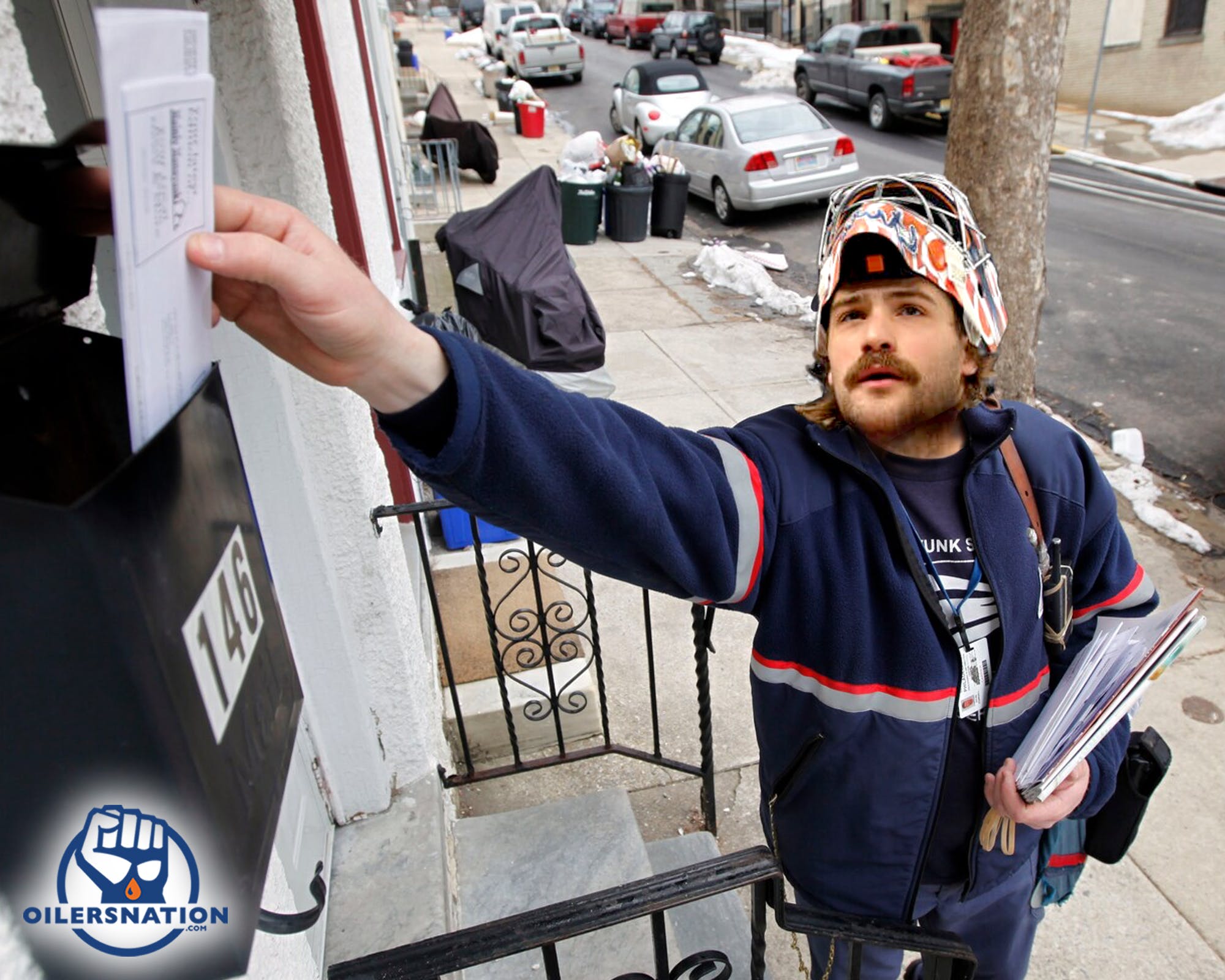 By baggedmilk
5 months ago
Happy Monday, Nation, and welcome to a fresh Mailbag to help you get your week started and break down what’s going on with the Edmonton Oilers. This week, we’re looking at the Flames adding Kadri, the Patrick Kane rumours, and a whole lot more. If you’ve got got a question you’d like to ask, email it to me at baggedmilk@oilersnation.com or hit me up on Twitter at @jsbmbaggedmilk and I’ll get to you as soon as we can. 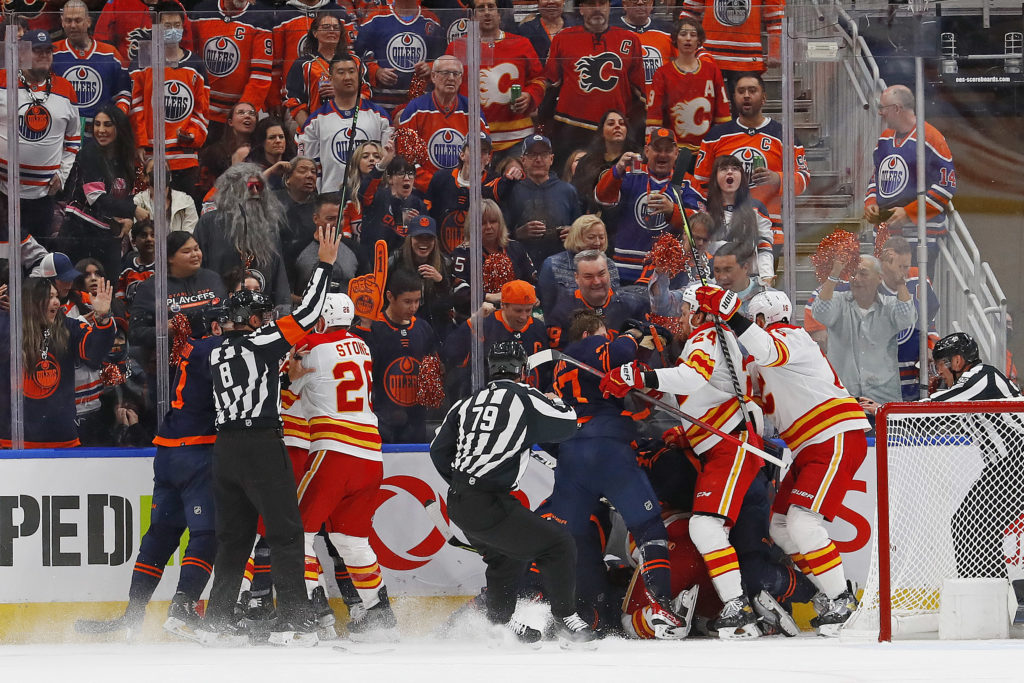 May 22, 2022; Edmonton, Alberta, CAN; The Edmonton Oilers and Calgary Flames fight after Calgary Flames forward Milan Lucic (17) ran over Edmonton Oilers goaltender Mike Smith (41) during the third period in game three of the second round of the 2022 Stanley Cup Playoffs at Rogers Place. Mandatory Credit: Perry Nelson-USA TODAY Sports
1) Paul asks – How do you see the Battle of Alberta for 2022-23 with the roster changeovers that the Flames have made? Are they as good as they were last year? Better? Worse?
Jason Gregor:
I think they are very close to the same. Will their defence stay as healthy and have six D-men play 73 games each? Doubtful, so that could impact their regular season point totals. I see them and the Oilers as the top-two teams in Pacific to start the season.
Robin Brownlee:
I can see the Flames slipping a little, but Brad Treliving did a helluva job after losing Gaudreau and Tkachuk. I think the Oilers win the division with the Flames right behind them.
Tyler Yaremchuk:
I think they are slightly worse simply because they still lost a lot of star power up front but they’d be a very difficult out in the playoffs with how strong they are on the blueline and in net. Having three strong/elite defensive centremen will also really help them potentially shut down McDavid and Draisaitl.
Baggedmilk:
I’m going to say about the same because they also got Weeger as part of the Huberdeau deal for some reason. He’s an upgrade on Gudbranson, Huberdeau is basically Gaudreau(ish), and Kadri has a lot to live up to if he’s going to make sure he doesn’t take a step back from where he was at last year. 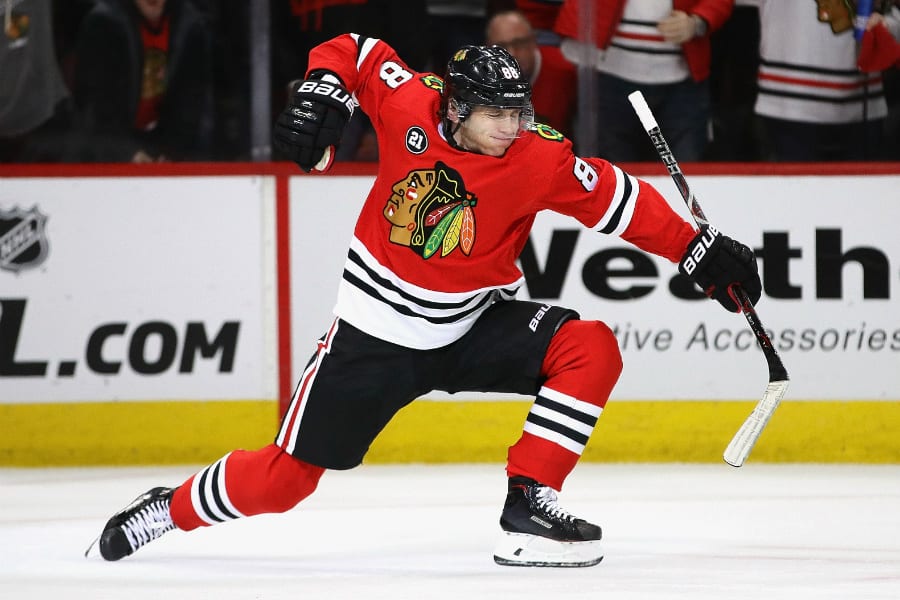 2) Hank in Grand Prairie asks – Patrick Kane would be a very fun addition to the Oilers’ offence provided that the rumour actually happened, but shouldn’t we be looking at defensive upgrades first? I think you obviously take Kane if you can get him, but does it make sense since he has only one year left on his contract and other holes that could be prioritized instead?
Jason Gregor:
Depends on who else they can get. Kane would give them the best top-six in the NHL. I agree they need to address their blueline, but if you can get P.Kane for one year with a $2.65m cap hit, I’d look at it. Funny thing, if they get him with a third team being involved his cap hit would be lower than JP, Yamamoto and Foegele. They could look at addressing the blueline closer to the deadline.
Robin Brownlee:
I’m not interested in Patrick Kane. Let him play out the string somewhere else. Great career, but doesn’t work for me. I’d be more interested in Phil Kessel as a cheap short-term addition up front. Need to look at getting help on the blueline.
Tyler Yaremchuk:
Yes, we should. Let’s say the cost to get Kane is a first, a second, Puljujarvi, and Foegele to make the money work. Why wouldn’t you just throw in an extra asset to get three full seasons of Chychrun instead of one year of Kane? The Oilers need help on the blueline and while Kane is an enticing addition, it feels a little unnecessary.
Baggedmilk:
It’s fun but there’s no way it’s happening. I just can’t believe it. 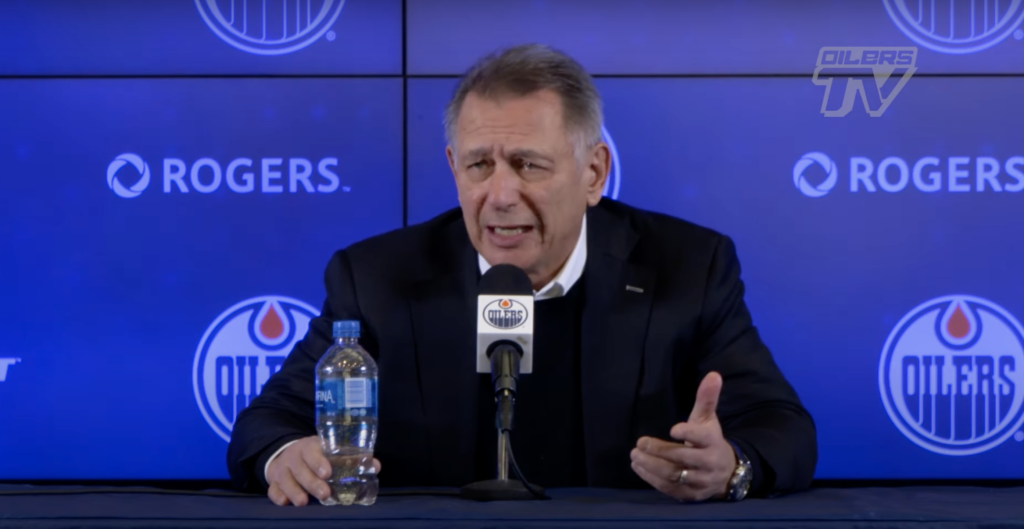 3) Daniel asks – How close to finished do you think the Oilers roster is as of right now?
Jason Gregor:
They have to shed some salary somewhere, so I expect at least one change. While P. Kane is enticing, I still think it is a longshot he’d agree to come, but if he is open to playing in Canada, then the Oilers are as attractive as any other team. Right now the Oilers’ bigger challenge is being cap compliant on opening night.
Robin Brownlee:
Won’t be finished until after training camp, no? Questions to be answered at depth positions at forward (why not Sam Gagner?) and on defence. Need to get under salary cap by start of the season.
Tyler Yaremchuk:
I think they’ll add a depth forward (hello Sam Gagner!) and a depth defenseman. My money is on a Danny Dekeyser PTO (just a hunch) but I wouldn’t be surprised if the Ben Harpur rumours come to fruition.
Baggedmilk:
Tweaks and Sam Gagner. That’s all we’re getting, I bet. 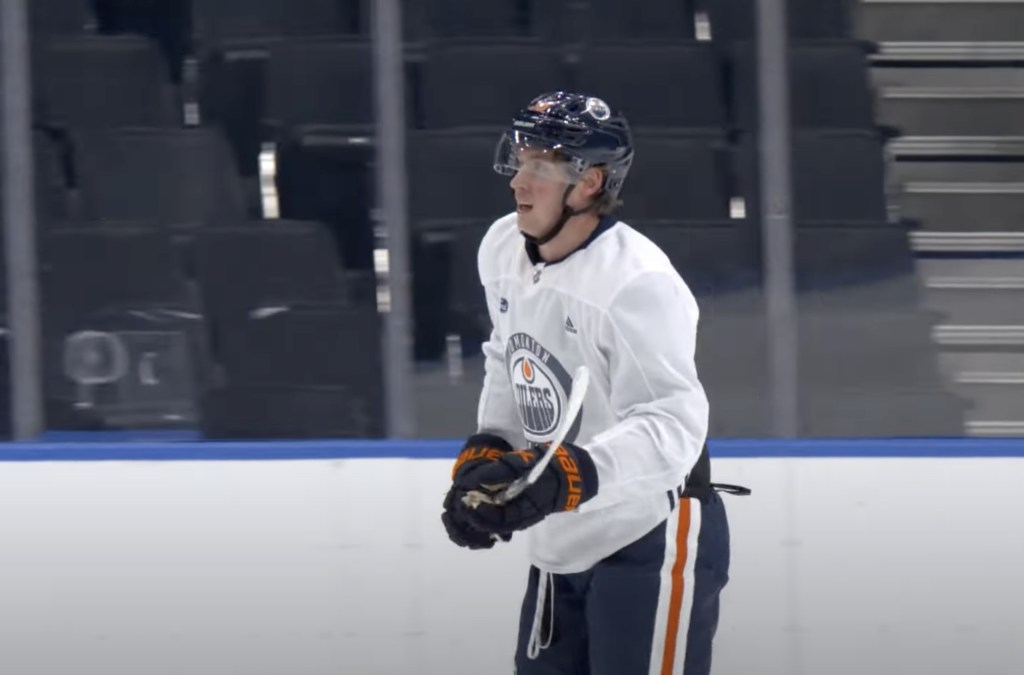 4) Ed asks – One of the axioms about the Oil that I’ve seen has been they don’t draft and develop well. The upcoming year’s roster could have as many as 10 of the last 11 (I’m not counting Schaeffer and Bourgault yet) 1st picks may be on the roster. Yak being the only miss. This period includes 4 GMs. Can the fallacy that the Oil don’t do D&D well be put to bed?
Jason Gregor:
Their drafting has improved, but we won’t know how good the past five drafts have been for a few more years. If you can get two regular NHL players from each draft you are doing well. The Oilers seem to have a few more prospects in rounds 2-7 than before, but good drafting has to come from the late rounds. Edmonton’s first round picks have improved from when they missed on many in the 90s, but depth picks who are difference makers still needs to improve.
Robin Brownlee:
Drafting and developing goes beyond first-round picks, plus, it’s too early to judge the last 4-5 drafts. Need to have some later round picks deliver.
Tyler Yaremchuk:
Part of the issue during the decade of darkness is that they didn’t get any solid players outside of the first round and they traded away players before they were done developing like Cogliano. Or in some cases, like Petry and Schultz, they didn’t properly develop them and had to watch them thrive in a better organization. The issue was never hitting on the first-round picks, it was every other area of player development.
Baggedmilk:
It’s going to be fun to watch some of these later-round picks develop to see if there are any diamonds in there. As much as Bourgault and Schaeffer are fun because they’re first-round guys, I’m almost more curious about the Petrovs and Tullios of the bunch. 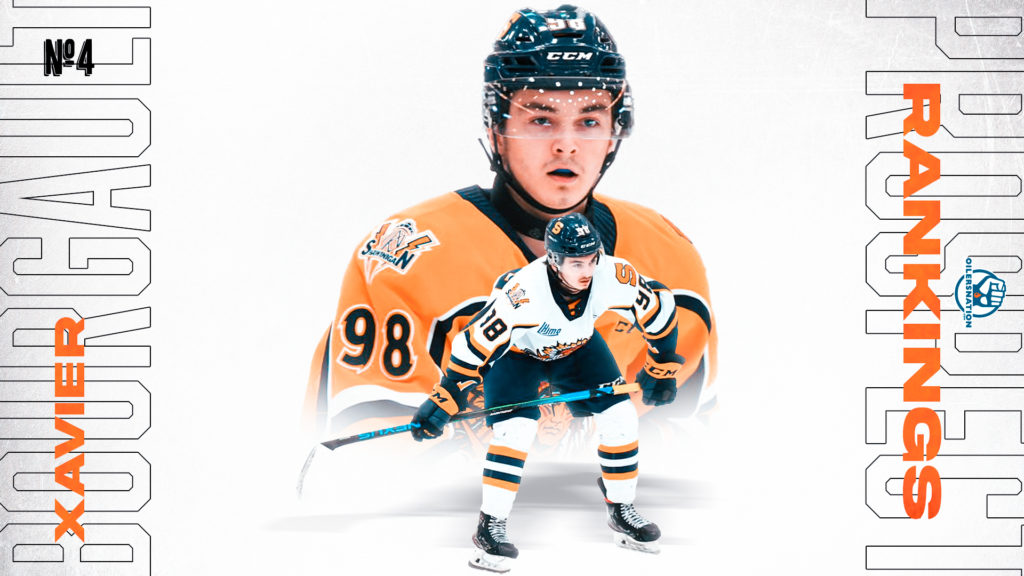 5) Oilers Fan in Sharks Territory asks – With the close of the World Jr Championship this upcoming/past weekend, I’d like to know how the panel feels about the limited number of Oilers prospects in this annual tournament. It seems like Oilers fans are used to pinning our hopes on a couple of prospects each tournament (Broberg, Klefbom, Eberle, etc.). I will give credit to the Oilers scouting team in recent years but… why do some teams (Senators, Rangers, Blues, Lightning, etc) appear to have more prospects in this tournament every year?
Jason Gregor:
This year TB and EDM had two and STL had one. The Rangers had seven and Senators six. Ottawa has been bad for years so them having a few more high picks in make sense. I give NYR scouts credit, they have some good prospects. Detroit had the most of any team with nine followed by Minnesota with eight. Tampa had an unreal stretch of drafting from 2007 to 2016. Al Murray and all the TB scouts deserve credit. I think scouts are like players. Some will be better than others. Murray had a great eye for talent and it helped build Tampa’s system for years. He hit on guys regularly in the middle and late rounds.
It was like Barry Fraser with the Oilers early in the franchise’s history. His first five drafts set them up for success.
He started great, but then struggled as the Oilers’ drafting hit the ditch for many years.
Robin Brownlee:
Sens have been bad for awhile so it makes sense they have some high picks playing. Beyond that, have you actually looked at the numbers? I haven’t. I ask because you say “it seems like” and “appear to have.” Not something I’m going to dig into on a Sunday morning, but it’s a reasonable question.
Tyler Yaremchuk:
Bourgeault could have been there and there were a few lower picks. Reid Schaefer could maybe make the team in the coming years as well. I don’t see a problem with it honestly.
Baggedmilk:
I don’t know everyone else’s prospect pools well enough to truly comment but it could also be outlier years for a few organizations rather than the norm? I dunno, I’m spitballing here.