Monday Mailbag – What does a Jesse Puljujarvi extension look like? 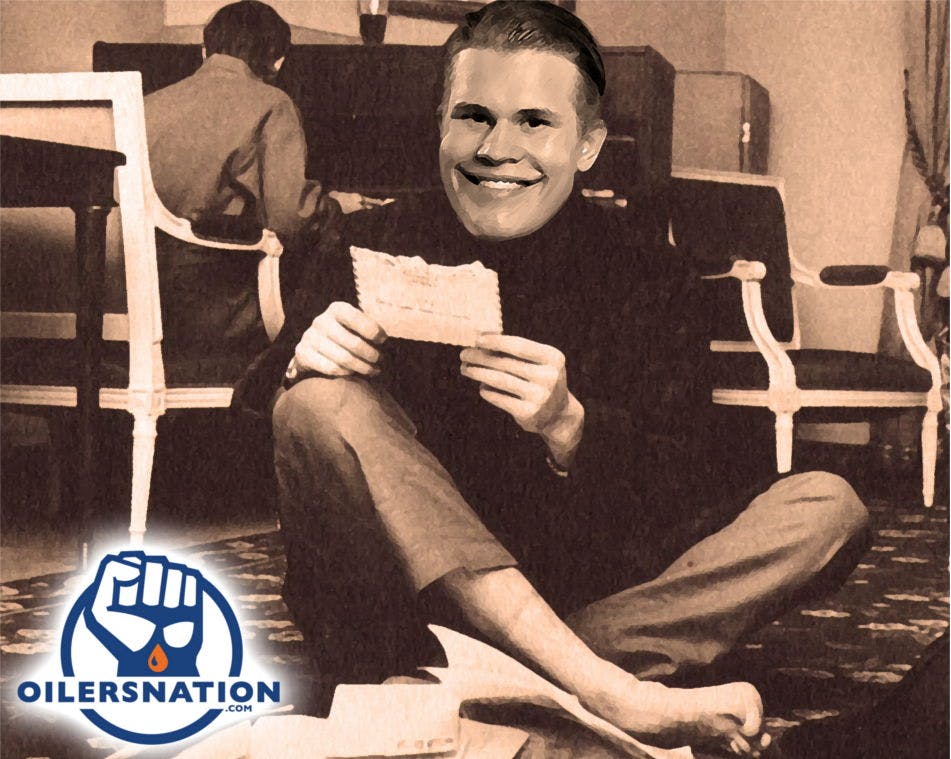 By baggedmilk
1 year ago
A new week means we’ve got a brand new Mailbag to help you get your Monday started and also to make sense of everything that’s going on with our beloved Edmonton Oilers! This week, we’re looking at Jesse Puljujarvi’s extension, Mike Smith’s injury, a way too early look at the trade deadline, and more. If you’ve got got a question you’d like to ask, email it to me at baggedmilk@oilersnation.com or hit me up on Twitter at @jsbmbaggedmilk and I’ll get to you as soon as we can. 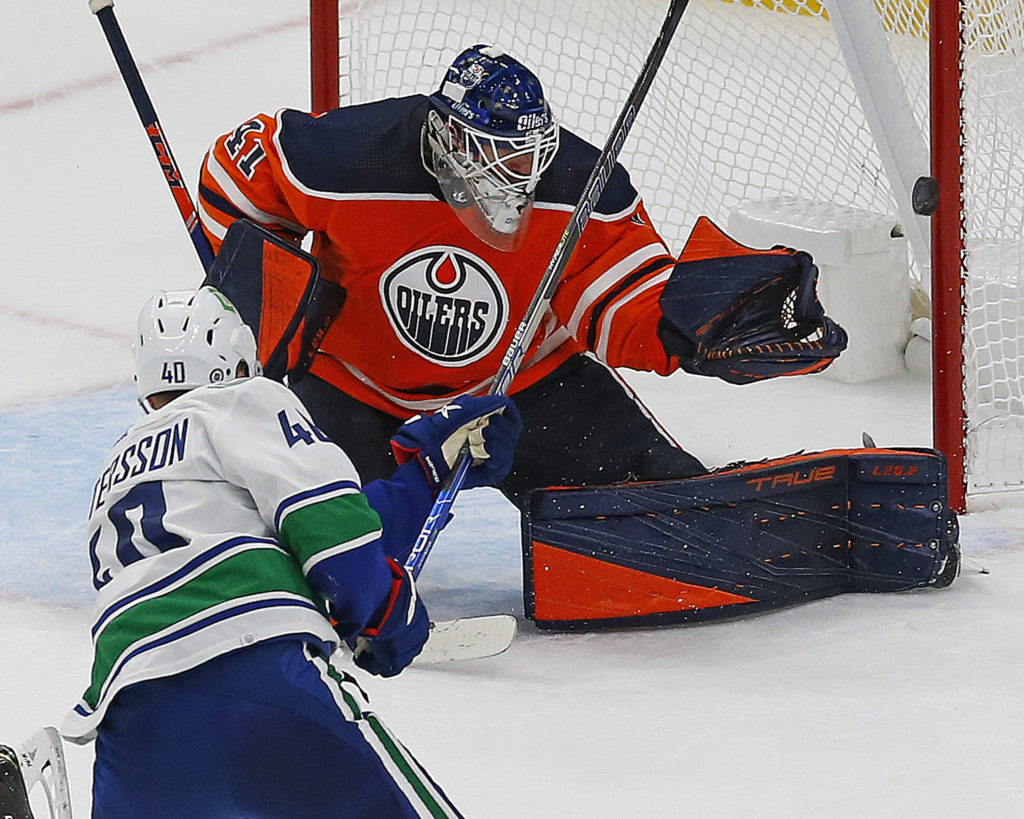 Oct 13, 2021; Edmonton, Alberta, CAN; Edmonton Oilers goaltender Mike Smith (41) makes a save on Vancouver Canucks forward Elias Peterson (40) during overtime at Rogers Place. Mandatory Credit: Perry Nelson-USA TODAY Sports
1) Oilers fan in Van asks – Mike Smith was sent back to Edmonton after a setback in his recovery and my question is how long does he have to be out before Ken Holland goes looking for help? Would Marc-Andre Fleury actually be a fit?
Robin Brownlee:
Holland has help — Mikko Koskinen and Stuart Skinner. Some people keep looking for situations and reasons to make Fleury a fit here . I don’t see the need or the likelihood that it will ever happen even if Smith remains out for awhile.
Jason Gregor:
If Koskinen keeps doing enough to win games then I don’t see him rushing to make a trade. Chicago has won three straight since they fired Colliton (no surprise, his defensive zone system was brutal) so the Hawks won’t be rushing to move Fleury. It depends what the doctors find on the imaging for Smith. If nothing serious, and he’s out another few weeks then Holland and the Oilers will likely ride it out.
Baggedmilk:
When I think of Marc-Andre Fleury, I just don’t even know how the Oilers would be able to make the math work unless Chicago is retaining half and they’re sending Koskinen/Kassian/something like that the other way. And if you’re the Blackhawks, would you want to make that trade anyway? As for the goaltending, it’s obviously concerning that Mike Smith is still out but I hope that the Oilers are just being extra cautious with him seeing as Koskinen has been playing quite well. I guess we’ll see. 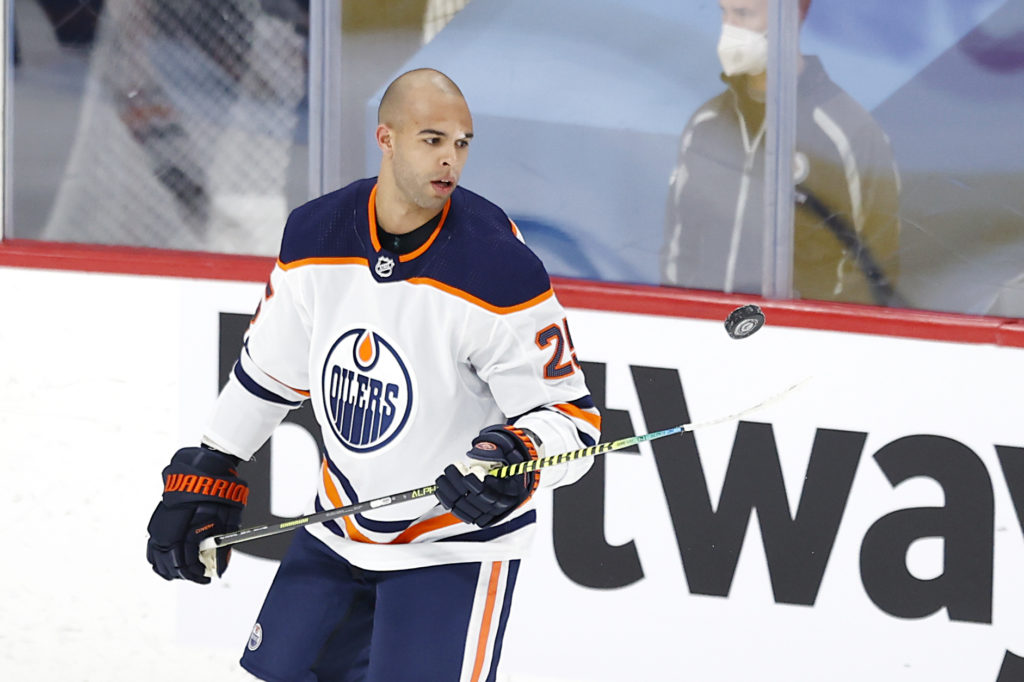 Apr 26, 2021; Winnipeg, Manitoba, CAN; Edmonton Oilers defenseman Darnell Nurse (25) puck juggles in warm up before a game against the Winnipeg Jets at Bell MTS Place. Mandatory Credit: James Carey Lauder-USA TODAY Sports
2) Marc asks – Darnell Nurse signed two bridge deals before eventually signing his monster contract this past summer. Knowing that, do you think they should take a different approach when it comes to Jesse Puljujarvi who will be needing a new deal when the season is over?
Robin Brownlee:
Knowing that, why would they want to take a different approach? I’m not giving Puljujarvi a home run contract at this point in his career even though I like what I’m seeing. Show me three outstanding seasons and we’ll talk. He’s maybe one-third the way along that timeline right now.
Jason Gregor:
Puljujarvi likely won’t sign a long-term deal for what the Oilers would want to sign him for. I don’t see Edmonton giving him a $6m deal on a long-term, and he and his camp likely feel he can become that type of player, so a bridge makes the most sense. Also in two years Duncan Keith, Milan Lucic and Andrej Sekera are off the books. The only Oilers who could garner big raises then are Evan Bouchard and Puljujarvi. So a bridge likely makes the most sense.
Baggedmilk:
I’d go to an eight-year max on Puljujarvi right now if they can make it work. Why bridge the guy further if you know he’s only going to get better? Would eight by $5.5 million work? 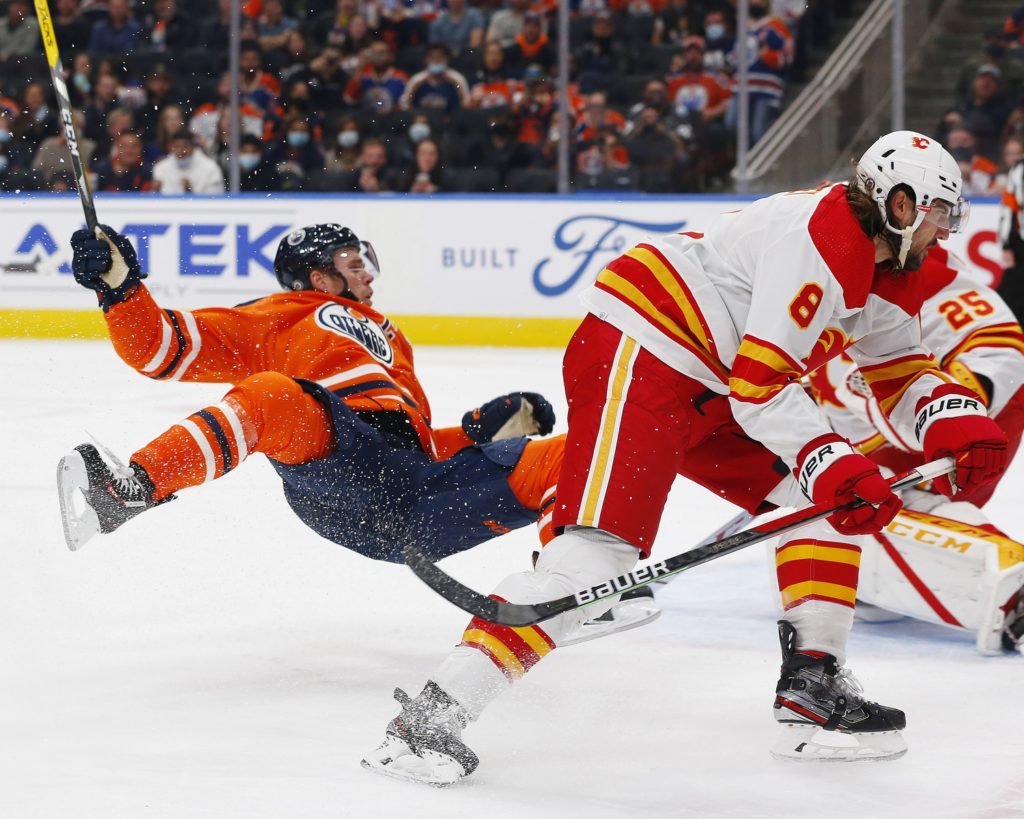 Oct 4, 2021; Edmonton, Alberta, CAN; Calgary Flames defensemen Chris Tanev (8) trips up Edmonton Oilers forward Connor McDavid (97) during the third period at Rogers Place. Mandatory Credit: Perry Nelson-USA TODAY Sports
3) Christopher asks – What can the Oilers do about the refs refusing to call penalties in favour of Connor McDavid? We saw multiple missed calls against him on this road trip and it’s angering to have no idea what a penalty is on a night to night basis.
Robin Brownlee:
They don’t need to call penalties in favour of McDavid. They just need to enforce the rules evenly and consistently and the calls will come. McDavid has the puck so much and he’s virtually impossible to stop for any length of time within the rules. It’s ridiculous to think that’s too much of an ask, but apparently, it is.
Jason Gregor:
It is a league-wide issue. It is a bigger problem than just McDavid, but I understand why Oilers fans are frustrated because a lot goes uncalled on McDavid. At the very least the Oilers brass should be calling the league privately. Going public only gets them fined, and I’m not sure it will help. But it is embarrassing how the NHL prefers their stars to endure more infractions rather than call the rule book consistently which would lower them.
Baggedmilk:
The refs are garbage in the NHL and I can’t see that changing any time soon. We’ll keep complaining about it, but nothing is going to change unless the league actually makes a point of changing things, which we all know won’t happen. 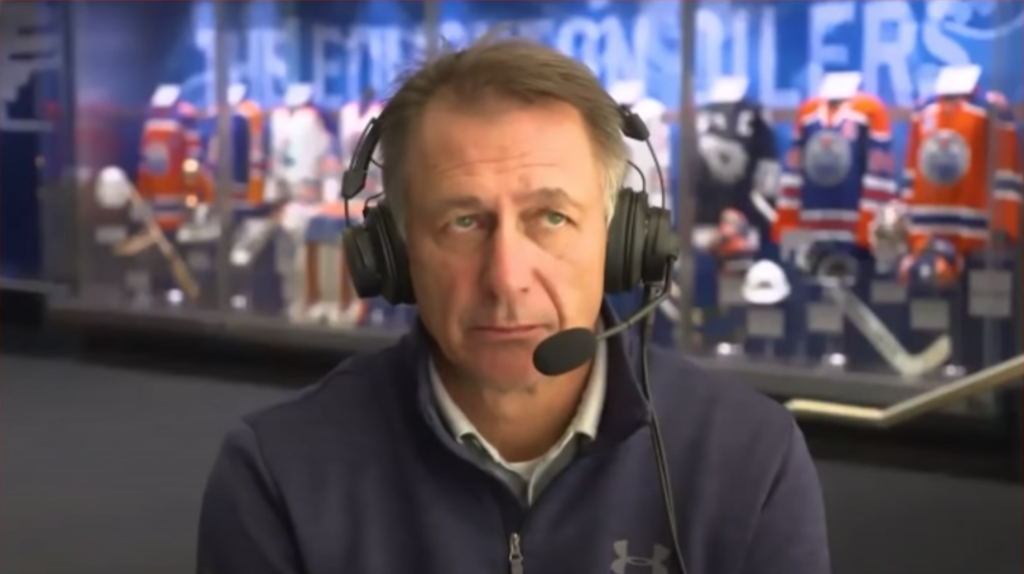 4) Adrien asks – Assuming the Oilers will be buyers at the trade deadline, where do you see upgrade opportunities in their lineup through the first 14 games?
Robin Brownlee:
This team isn’t even settled in and set yet in the bottom six forward mix and the defensive pairings, so it’s a bit early. The trade deadline is March 21. Let’s see where that bottom six is after 40-50 games. Also, it’s worth keeping an eye on the left side of the defensive group. Right now, the Oilers are outscoring some of their question marks on the back end.
Jason Gregor:
They need to upgrade their third pair LD, and a forward or two who can help them defensively at 5×5. Goal scoring isn’t a problem. Limiting goals at 5×5 is their glaring weakness right now.
Baggedmilk:
The Oilers need to upgrade the left side of their defence. I think if you could get an upgrade on Koekkoek/Russell in that 3LD spot then that would be great, but it would be even better if they could find a 2LD somehow. Maybe we just need to pray for Klefbom to come back because he would solve so many problems right now. 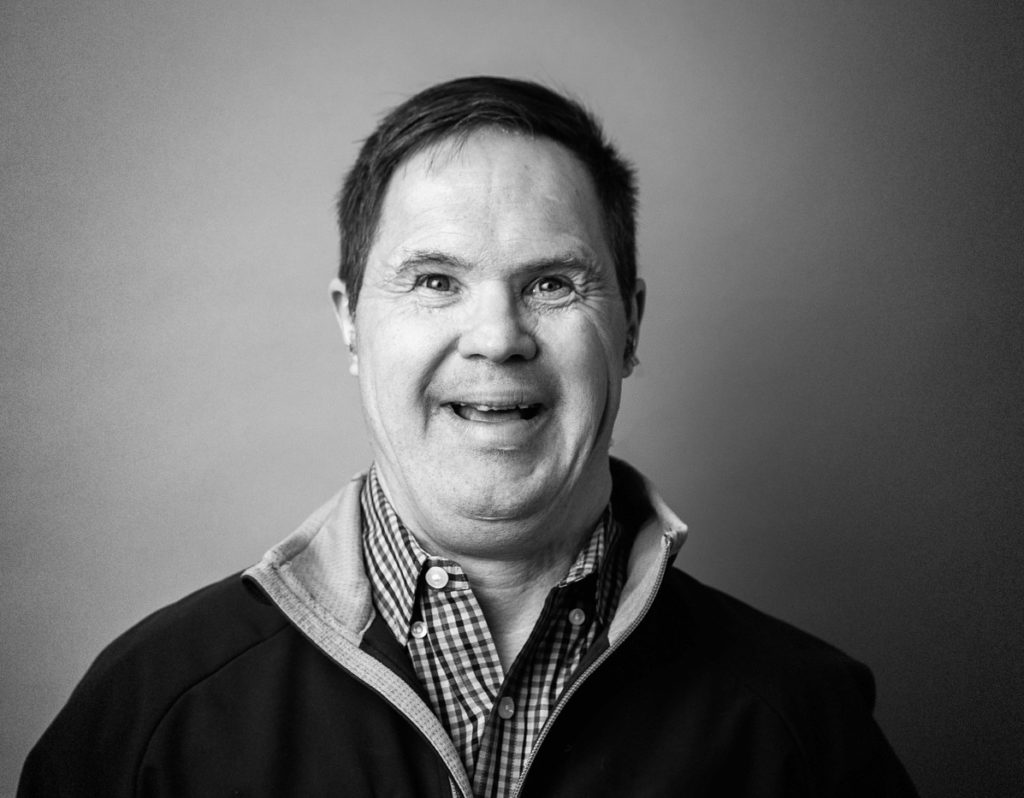 Joey Moss. A Legend
5) Chandler asks – With the announcement of the Wall of Honour we’re going to see guys like Smytty, CuJo, Weight, and Ranford be honoured there at some point. Do you think it would be appropriate to add Joey Moss to the wall even though he wasn’t a player but still a huge part of the team?
Robin Brownlee:
It’s never inappropriate to honor Joe. If the wall isn’t specifically for players then he’d be there for me, even though they’ve added his likeness in the dressing room already. More Moss is fine by me.
Jason Gregor:
They honoured Joey in the room, where he did his most important work. I could see some photos of him in the Wall of Honour, but he’s already got a huge honour inside the dressing room which is where players remember his biggest contributions.
Baggedmilk:
I would absolutely put Joey on the Wall of Honour. He means more to this team and this city than most players that will ever wear the jersey and the franchise can’t do enough to honour him, in my opinion.

For 90 years and four generations, Cornerstone Insurance has been a family and employee-owned business in Edmonton with all of the insurance products you need for your ever-evolving life. Citizens of the Nation can get a discount here.
Nation Takes
Oilers Talk
Recent articles from baggedmilk