Monday Mailbag – What to expect from Kailer Yamamoto 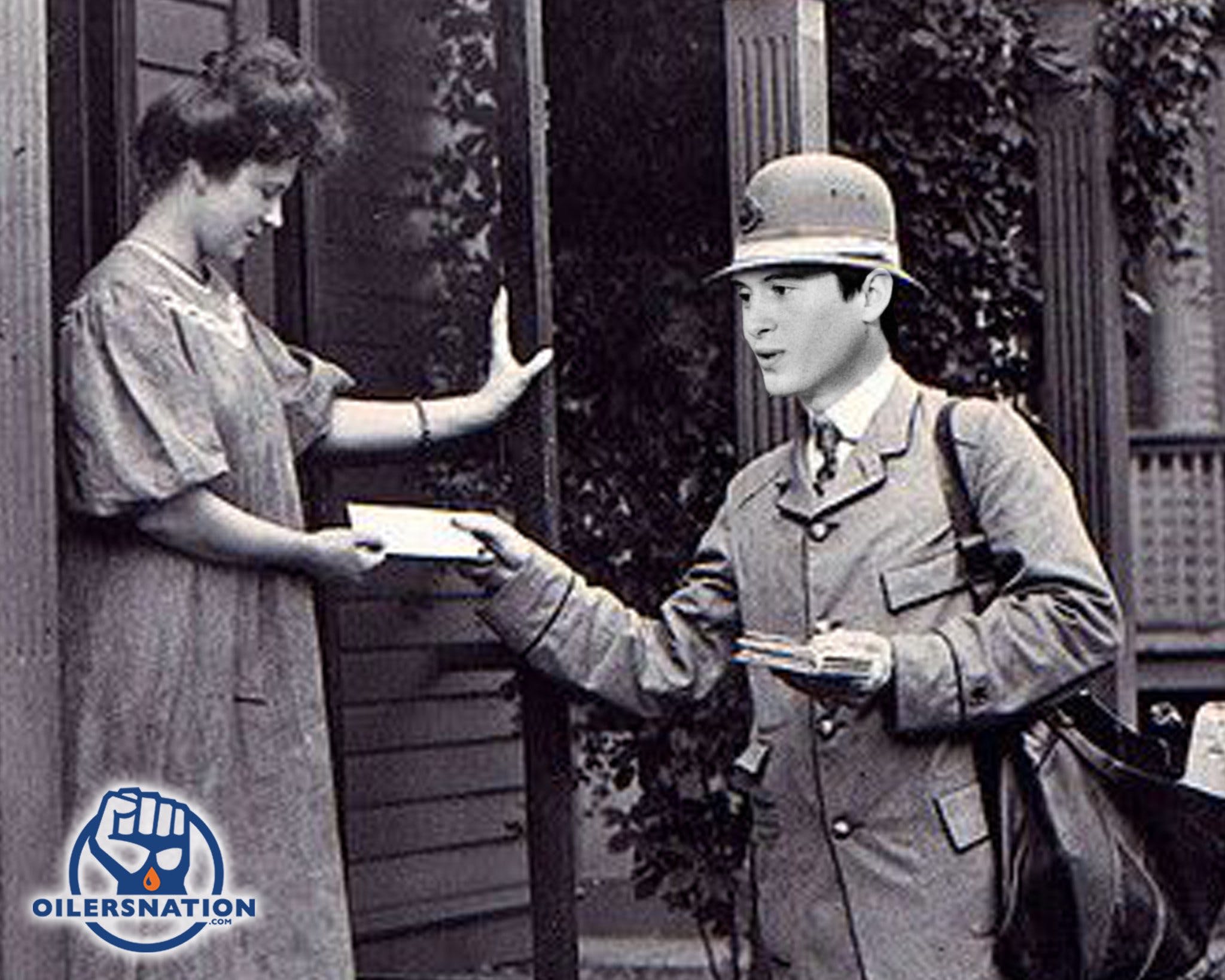 By baggedmilk
1 year ago
It’s Monday morning and that means we’re back with a brand new Mailbag to not only get your week started but also to make sense of what’s going on with our beloved Edmonton Oilers! This week, we’re looking at Kailer Yamamoto’s upcoming season, Alex Stalock’s spot on the depth chart, Klefbom, and more. If you’ve got got a question you’d like to ask, email it to me at baggedmilk@oilersnation.com or hit me up on Twitter at @jsbmbaggedmilk and I’ll get to you as soon as we can. 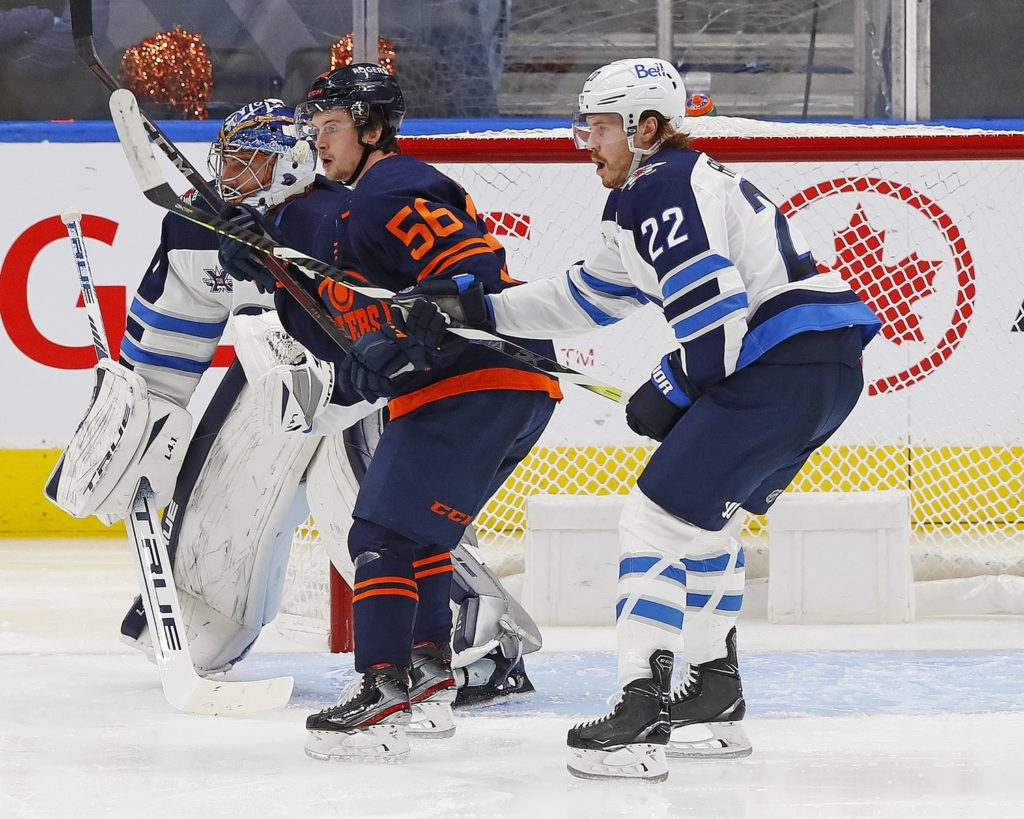 May 19, 2021; Edmonton, Alberta, CAN; Edmonton Oilers forward Kailer Yamamoto (56) battles with Winnipeg Jets forward Mason Appleton (22) in front of goaltender Connor Hellebuyck (37) during the second periodin game one of the first round of the 2021 Stanley Cup Playoffs at Rogers Place. Mandatory Credit: Perry Nelson-USA TODAY Sports
1) @HockeyScribe asks – Will the real Kailer Yamamoto stand up this year and which one will it be? Nearly a point-per-gamer from second half of 2019-20 or last year’s version? Where do you think he will actually land?
Jason Gregor:
The real Yamamoto? Expecting him to be a point-per-game player is unrealistic. That was a massive heater. I also think he is capable of more than what he produced last season. I’d take the average of those two seasons and that is what I see him as. A 45 point player who has the potential to produce a bit more, but he has only played 79 games the past two seasons. He is very young, still developing and trying to find his way/role in the toughest league in the world.
If he can score 40-45 points this season that would be solid. Anything above that should be considered very good.
Robin Brownlee:
He will land where the vast majority of players do — in the middle ground between a ridiculous hot streak and a frustrating stretch at the end of last season. Yamamoto isn’t going to shoot at 25 per cent like he did in 2019-20 and he isn’t going to struggle like he did to end last season. Much of what we see will be dictated by who he plays with — could be on the third line to start.
Tyler Yaremchuk:
I think he’s somewhere in the middle of those two. I don’t think Kailer Yamamoto will be a point-per-game player in an 82 game season, especially when you consider that he doesn’t get a lot of powerplay time. At the same time, I think he’ll be more productive than he was last season. He still created a lot of turnovers and he went to the right areas in the offensive zone, he just couldn’t finish off chances. I think he’ll get 20 goals this season and sit around 55 points.
Baggedmilk:
He’s going to land somewhere in the middle and that would be absolutely fine by me. Last year, Yamo had all kinds of scoring chances but he just couldn’t bury anything, so if he can get a little bit of puck luck it would probably go a long way. Yamamoto is always going to get his chances based on his relentlessness on the puck, and I think getting a few goals early would probably go a long way for helping his confidence. 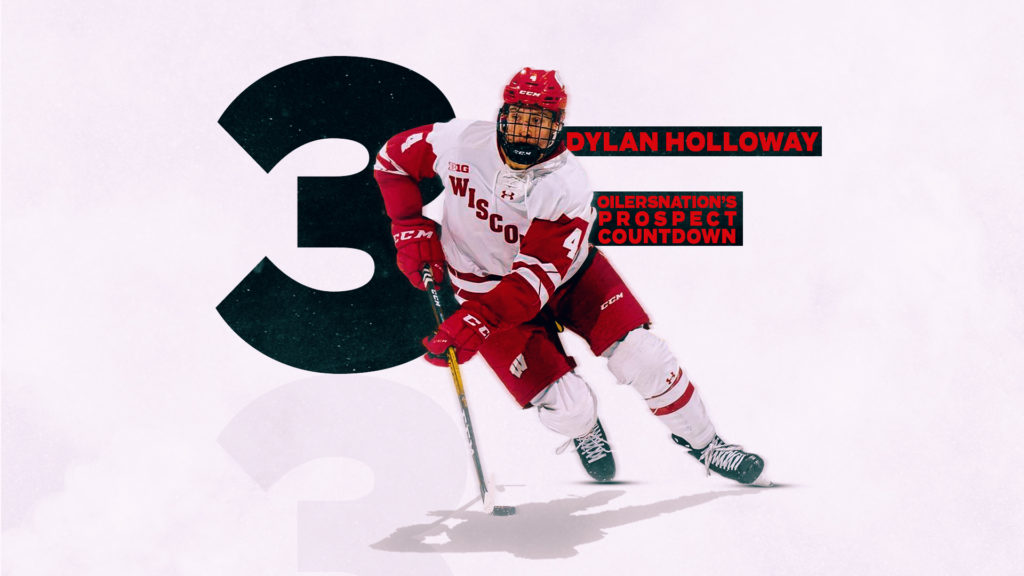 2) @CanaSwi asks – If Holloway is as ready as some say he is, can you see him stealing a spot in the top 9?
Jason Gregor:
He will have a legit shot in training camp. If he plays well it gives Dave Tippett more options. Holloway can skate at the NHL level right now, but we’ll see if he can handle the quick decision making and the strength and physicality of the league. He is in a great spot because he doesn’t come in with any expectations to be a top-six player or to play a key role.
Edmonton doesn’t have to rush him. He could start in the AHL and get loads of ice time and a chance to build his confidence, but if he has a dominant preseason he could get a look. I will politely remind people that doing well in the preseason doesn’t mean it will translate to the regular season. The preseason is still only about 65% of the NHL regular season, especially the early preseason games. The final two are closer to 80% of an NHL regular season game.
I’m curious to see what he looks like in camp.
Robin Brownlee:
Don’t know the player well enough at this point to say with certainty, but it seems likely he’ll start the season in Bakersfield. My best guess is he’ll slot in at centre in the AHL rather than lower in the line-up at wing here. The next natural step is a full year of pro at the AHL level.
Tyler Yaremchuk:
Maybe not right from the start of the season, but I could see him getting a chance early in 2022 and taking full advantage of it. He made some huge jumps last season and when you consider the style of player he is, he could be a perfect fit with one of McDavid or Draisaitl. There’s nothing wrong with giving him a taste of pro hockey down in Bakersfield, but I fully expect him to be an NHLer by the end of the season.
Baggedmilk:
I bet Holloway does a Yamamoto type of thing where he starts in the AHL and works his way onto the big club by the second half of the season. What I don’t know is if it will happen this year or next. I guess we’ll just have to wait and see how he looks in training camp. 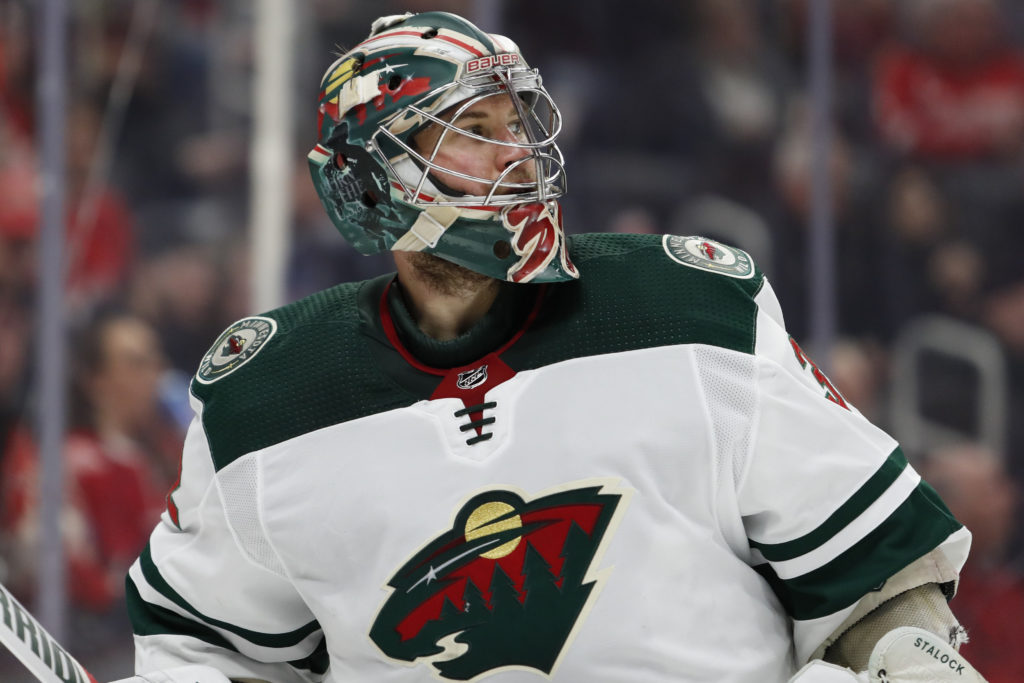 Feb 27, 2020; Detroit, Michigan, USA; Minnesota Wild goaltender Alex Stalock (32) looks on during the second period against the Detroit Red Wings at Little Caesars Arena.
3) Kylie asks – If you were to guess, do you see Alex Stalock playing any games for the Oilers this season?
Jason Gregor:
If he is on the roster then Mikko Koskinen is in the minors, but the cap savings is minimal, so it will be based on play. He hasn’t played an NHL game in over a year, so we’ll see what he does. Stalock will have to outplay Koskinen to stick around. If he is put on waivers, a team might claim him due to his low cap hit, but if he isn’t claimed I’m more curious where he will play. Edmonton has Skinner, Konovalov and Rodrigue who need ice time. Having Stalock, or Koskinen, in Bakersfield doesn’t make any sense, so if they clear waivers can Edmonton strike a deal with another AHL team to send the veteran goalie there.
Robin Brownlee:
If Stalock has to play a single minute for the Oilers this season it’s a bad sign no matter how you slice it.
Tyler Yaremchuk:
I honestly could see it. The organization clearly isn’t very high on Mikko Koskinen and Stalock had really good numbers last time he was given a chance to play. It might not be the most likely outcome, but I think there’s certainly a chance that Stalock steals a roster spot from Koskinen. If that doesn’t happen, he’ll likely be the first call-up if there is an injury.
Baggedmilk:
I’m going to say yes because I imagine there will be some bumps and bruises along the way, as you would expect from any NHL season. That said, unless the Oilers decide to carry three goalies then I don’t know where he’ll fit on the depth chart. Do you really want Stalock playing in Bako ahead of Konovalov and Skinner? 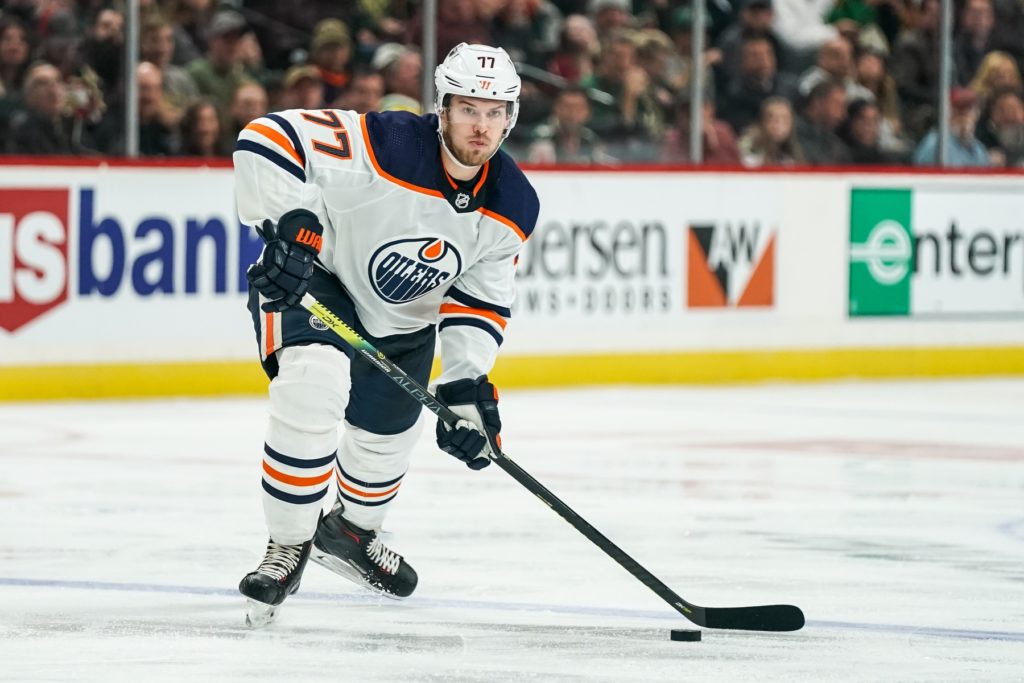 Oct 22, 2019; Saint Paul, MN, USA; Edmonton Oilers defenseman Oscar Klefbom (77) passes during the third period against the Minnesota Wild at Xcel Energy Center. Mandatory Credit: Brace Hemmelgarn-USA TODAY Sports
4) @curtismah asks – Do you think Klefbom can be back for the playoffs and come off LTIR just in time to see the cap rules lifted, or do you think he is actually done for good?
Jason Gregor:
I’d be stunned if that happens. He hasn’t been able to workout at an NHL level yet. Until he can do that I don’t see how he could possibly play.
Robin Brownlee:
Haven’t seen any kind of medical update on Klefbom regarding the start of the season, let alone what might happen next spring. I’d be very surprised if Klefbom plays another game for the Oilers.
Tyler Yaremchuk:
I hope he’s healthy enough to come back and play but at this point, I don’t think it’s going to happen. It would certainly be huge for the Oilers, but they shouldn’t be banking on it.
Baggedmilk:
Please. Please, Hockey Gords. Give us a gift that none of us really expect to happen. What a beautiful thing this would be. 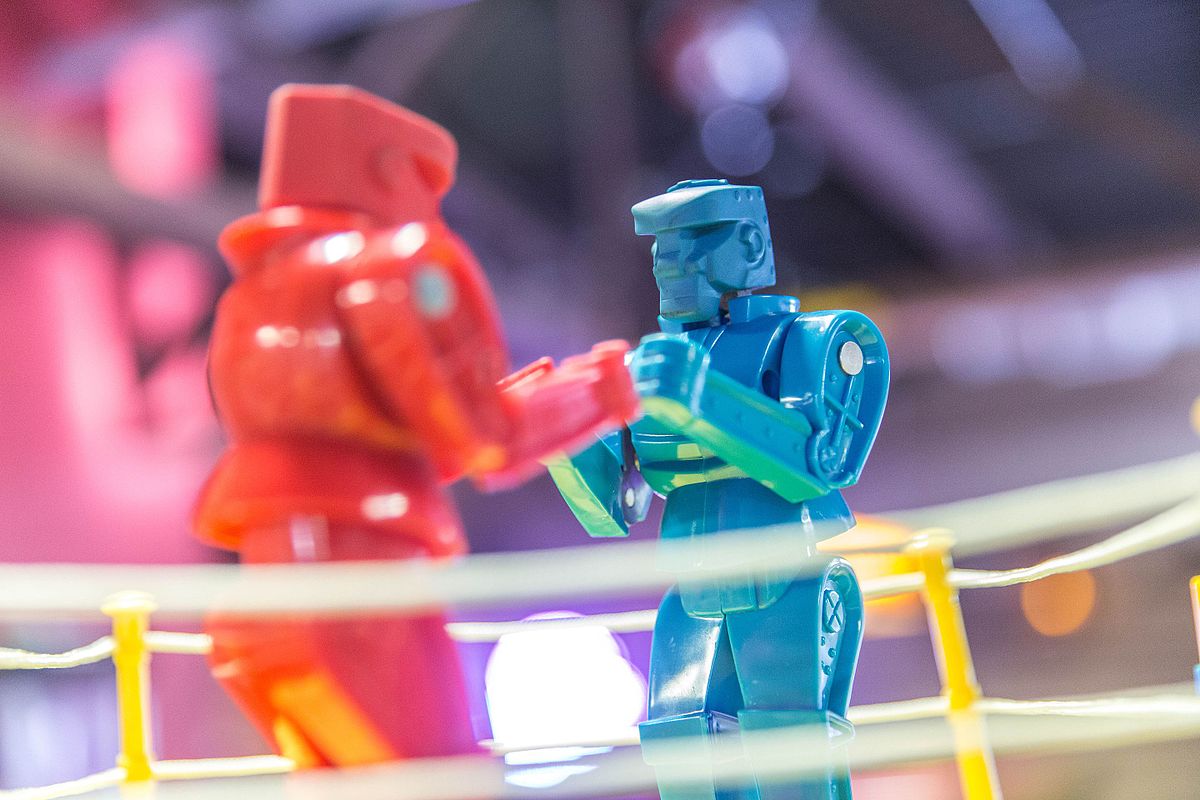 5) @MackLamoureux asks – Would you rather fight one Yamamoto sized Puljujarvi or three Puljujarvi sized Yamamotos?
Jason Gregor:
I’d rather fight two hands than six hands… regardless of size.
Robin Brownlee:
Neither. They haven’t done anything to me.
Tyler Yaremchuk:
We talked about this on Oilersnation Radio this past week and my answer is this: always take the size advantage.
Baggedmilk:
Three Puljujarvi sized Yamamotos is a devastating opponent, in my opinion, and the last thing I need is three of them swinging from the shoelaces at me. No thank you.