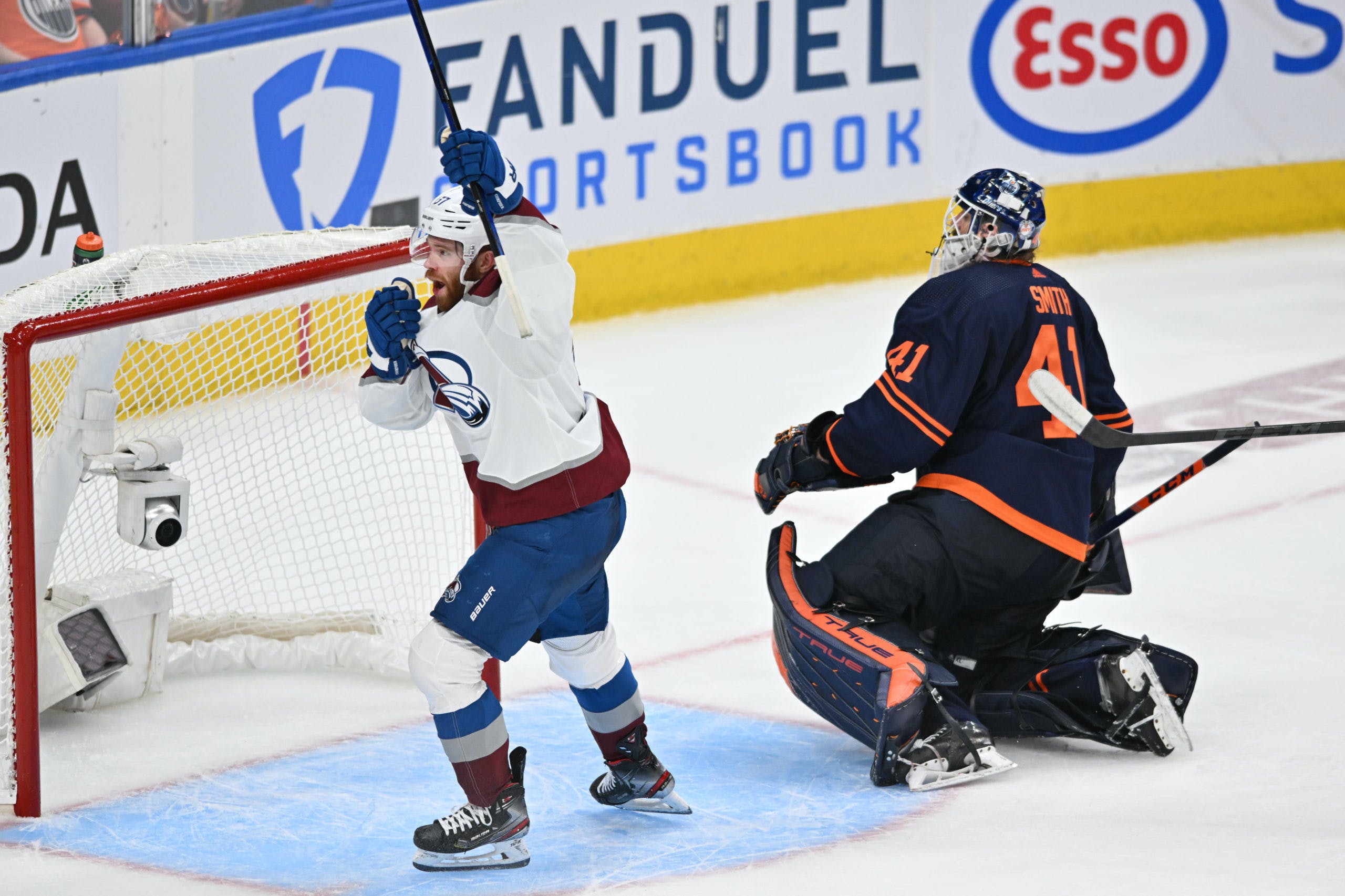 By Jason Gregor
4 months ago
The 2022 Stanley Cup champion Colorado Avalanche just completed one of the most dominant Cup runs in NHL history. They went 16-4 defeating Nashville, St. Louis, Edmonton, and Tampa Bay to hoist the Cup. The Avs tied the 2012 Los Angeles Kings, 1997 Detroit Red Wings, 1995 New Jersey Devils and 1993 Montreal Canadiens at 16-4. Only the 1988 Edmonton Oilers were better going 16-2.
Colorado did it with an Avalanche of offence. They scored 4.25 goals/game which is the 11th highest (teams who played minimum 16 games) and the highest since the 1988 Oilers averaged 4.67 goals/game. The NHL has often been a copycat league, and hopefully, more teams will try to mirror the speed, skill and style of the Avs. They won with more of an emphasis on offence, than on defence. They showed in the third period, they can lock it down defensively, when needed, but much of their run to the Cup was built on the strength of their puck moving and offensive skillset.
Hockey is the best when speed and skill are at the forefront. The Avs were that, and more, and I hope they are ushering in a new era of NHL hockey. I don’t think people realize how dominant they were offensively.
They averaged 4.25 goals/game. The 2021 Tampa Bay Lightning, a highly skilled team, averaged 3.26 goals/game. The Avs averaged one more goal every playoff game. Tampa allowed 1.96 goals/game, while the Avs were at 2.75.
Colorado’s games averaged a total of 7.00 goals/game, while the 2021 Lightning averaged 5.22. More offence leads to more lead changes and more excitement. NHL games with an average score of 4-3 is ideal.
But the Avs offence was the story. In the 2000s we have seen 86 teams play at least 16 games in a playoff year.
The Avs had the most goals at 4.25/game. Here the nine teams who rounded out the top-10.
2022 Edmonton Oilers at 4.06 G/GP in 16 games. (Dare to dream Oilers fans).
2018 Washington Capitals at 3.58 in 24 games.
2015 Anaheim Ducks at 3.56 in 16 games.
2010 Chicago Blackhawks at 3.55 in 22 games.
2014 Los Angeles Kings with 3.38 in 26 games.
2006 Buffalo Sabres at 3.33 in 18 games.
2009 Detroit Red Wings with 3.30 in 23 games.
2010 Philadelphia Flyers at 3.30 in 23 games.
2019 Boston Bruins and 2009 Pittsburgh Penguins each at 3.29 in 24 games.
The Avalanche averaged 0.67 goals/game more than every team in the last 22 years, except the Oilers, who had Connor McDavid and Leon Draisaitl each averaging two points/game. The Avalanche were the most exciting offensive Cup Champion in decades, and I hope more teams try to emulate their success. 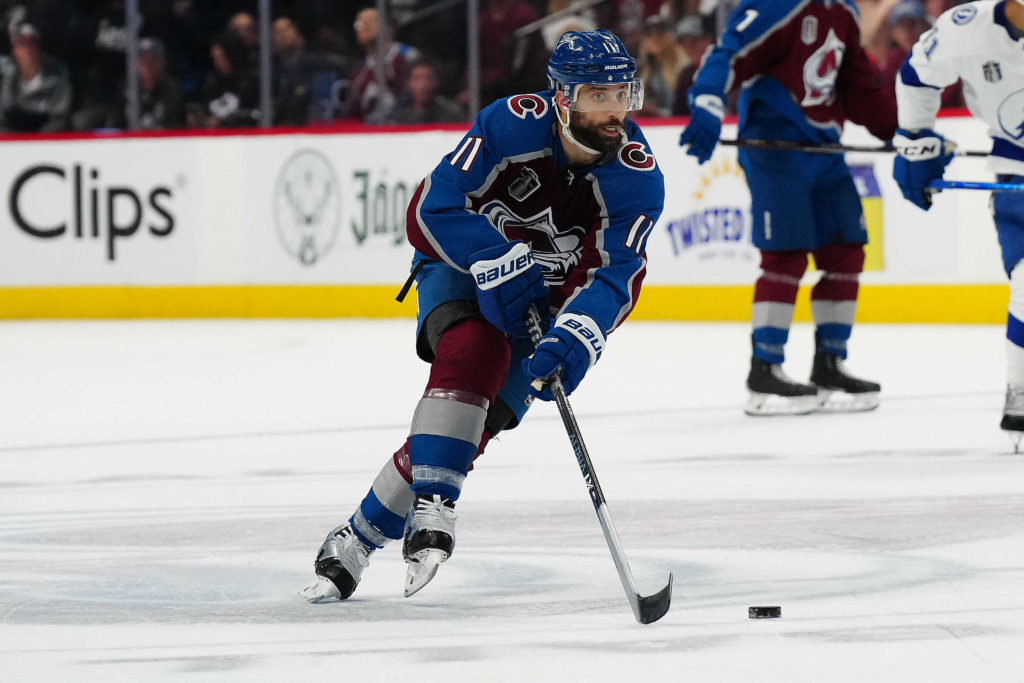 Jun 24, 2022; Denver, Colorado, USA; Colorado Avalanche center Andrew Cogliano (11) moves the puck against the Tampa Bay Lightning during the second period in game five of the 2022 Stanley Cup Final at Ball Arena. Mandatory Credit: Ron Chenoy-USA TODAY Sports
The Avalanche parade is on Thursday, but the off-season has officially begun. And, oh baby, are there many juicy story lines and angles across the NHL.
The San Jose Sharks need a general manager. Will it be Scott Nichol? Owner Hasso Plattner believes the team can re-tool quickly, but is that realistic? It is hard to fathom with the age and salary of their top players.
The Winnipeg Jets, Detroit Red Wings and Boston Bruins need a head coach. What direction are the Jets going in? Will they dismantle their team as Blake Wheeler, Mark Schiefele and Connor Hellebuyck only have two years remaining and Pierre-Luc Dubois is on record as saying he won’t sign longer than two years so he can test free agency. Do they need a younger coach who can work with young players? The Bruins still have many quality veterans, while the Red Wings look like a team on the rise. Both jobs are attractive for different reasons.
Will Johnny Gaudreau leave Calgary? Will Filip Forsberg leave Nashville? Two excellent offensive players could hit the market.
What will Pittsburgh do with Kris Letang and Evgeni Malkin? Will they re-sign or test the market? I’d expect Letang to have many suitors.
Nazem Kadri scored 87 points in 73 games this past season, crushing his previous high of 61 points. He turns 32 in October. In 2021 he has the second-lowest point-per-game season of his career when he tallied 32 points in 56 games (0.57 points/game). His 1.23 points/game from this season was easily his best, but how realistic is it he’ll come close to that again? His previous best was 0.92 with Toronto in 2013 when he scored 44 points in 48 games during the shortened season. His next three seasons he scored 50, 39 and 45 in full seasons. He’s an important piece for the Avs, but he turns 32 in October and last year seems like an offensive outlier.
The goalie carousel will be very busy. Darcy Kuemper, Marc-Andre Fleury, Jack Campbell, Ville Husso, Casey DeSmith, Martin Jones, Braden Holtby, Scott Wedgewood, Jaroslav Halak, Eric Comrie, Charlie Lindgren and David Rittich are all UFAs.
Alexandar Georgiev is an RFA and will be traded by the Rangers. It seems New Jersey is ready to move on from McKenzie Blackwood.
Even though he didn’t have a great playoffs, I could see Kuemper re-signing in Colorado. But many teams will be looking for a starter, a backup or a tandem starter (half the games). I think the best value signing will be Wedgewood.
Letang (if he doesn’t re-sign in Pittsburgh) and John Klingberg are the two best offensive D-man on the market. Both shoot right. If a team is looking for offence from the blueline they are the leaders by far. Letang had 68 points, and Klingberg had 47. Ben Chiarot was next at 26 among UFA D-men.
The lack of offensive punch is why I believe Tyson Barrie could be a valuable trade chip if the Oilers opt to move him. He’s averaged 0.67 points/game over his last nine seasons and a $4.5m cap hit for two years for an offensive-minded D-man who can run the powerplay is good value.
Evander Kane’s arbitration case with the Sharks won’t occur prior to the start of free agency. This could lower his cap hit and term as teams who are interested might not wait, and rather sign other forwards first.
The list of forwards who scored 20 goals last season include: Forsberg (42), Gaudreau (40), Kadri (28), David Perron (27), Valeri Nichuskin (25), Patrice Bergeron (25, although he will only sign in Boston), Nino Niederreiter (24), Andre Burakovsky (22), Kane (22 in 43 games), Vincent Trocheck, Claude Giroux, Paul Stastny, Ryan Strome, Andrew Copp and Ilya Mikheyev (21) and Rickard Rakell and Malkin (20).
Over the past three seasons, the leaders in combined goals among those forwards are Bergeron (79), Gaudreau (77), Forsberg (75), Perron (71), and Kane (70).
Important Dates…
July 1st: First buyout window open.
July 2nd: Deadline for club-elected salary arbitration.
July 7th: Round one of NHL draft. It is on Thursday this year.
July 8th: Rounds 2-7 of NHL Draft.
July 11th: Teams need to submit qualifying offers by 3 p.m. MT.
July 12th: First buyout period ends.
July 13th: Free agency begins at 10 a.m. MT, noon ET.
July 17th: Deadline for player-elected salary arbitration. Kailer Yamamoto and Jesse Puljujarvi, Tyler Benson and Brendan Perlini are arbitration eligible.
July 22th: Qualifying offers expire.
July 27th to August 11th: Arbitration hearings.
Next week should present quite a few significant trades in the NHL. Many teams are looking to either shed salary, or alter the look of their team. I’ve mentioned Barrie as a legit trade candidate for months, and I expect those talks to heat up leading up to the draft. Georgiev, Blackwood, Kevin Fiala and Alex DeBrincat are some names we expect to move. I also see Las Vegas, Toronto, Philadelphia, both New York teams, Vancouver, and Montreal looking to make significant moves. Coyotes GM Bill Armstrong told me he is very open to adding salary if it comes with draft picks. The Sabres already did that with Ben Bishop, and I could see them doing it again.
The Carolina Hurricanes are another team I’m curious to see how they approach trades and free agency. How can they improve their team? Luc Robitaille was our guest on the DFO rundown heading into the playoffs and he said the Kings are now entering the competitive mode. They have lots of trade capital (deep prospect pool) if they are inclined to make a big move.
The next few weeks should be great theatre, just like watching the Avalanche during their run to the Cup.