Monday Musings: WTF is Happening in the 2022 Stanley Cup Playoffs? 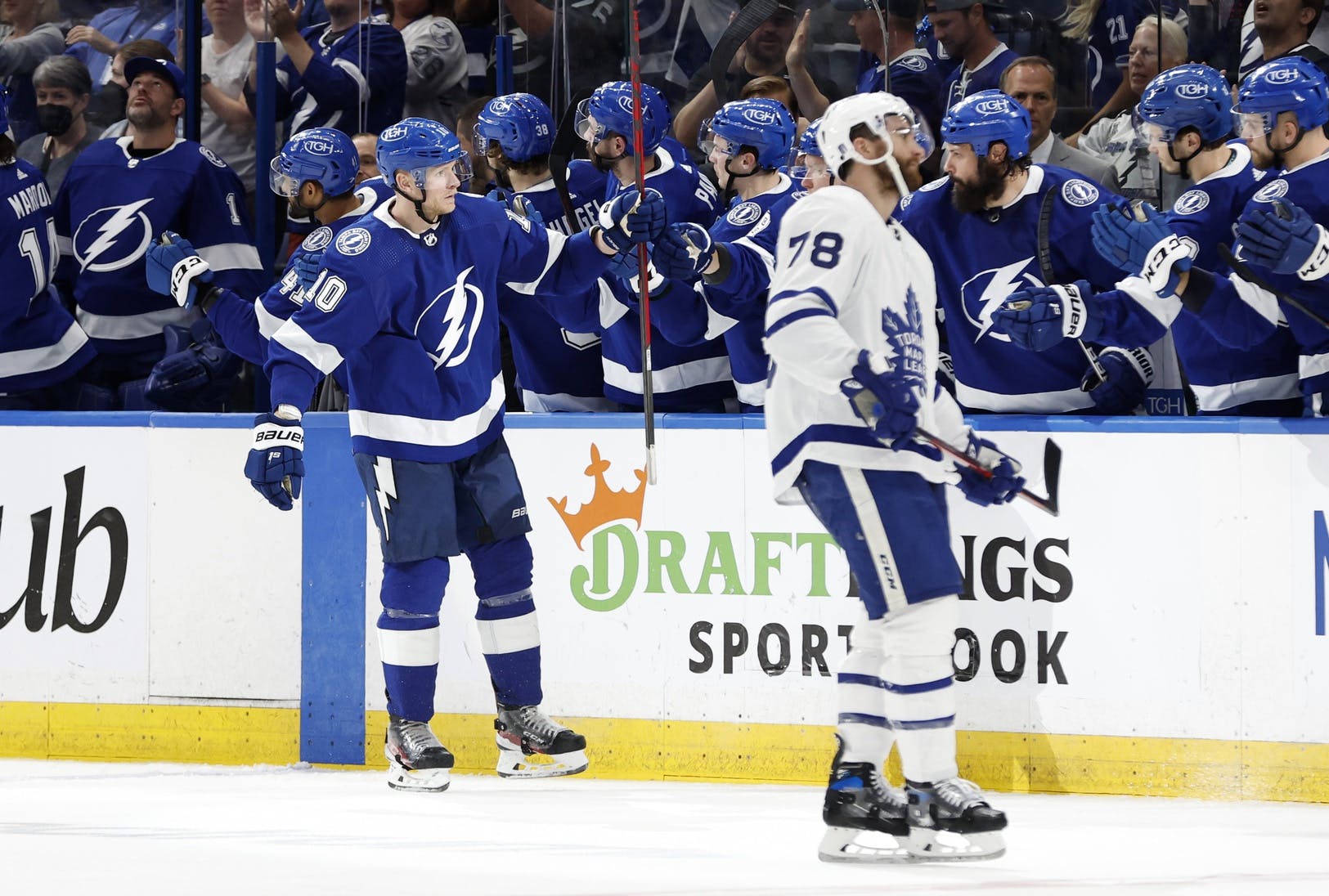 By Jason Gregor
6 months ago
How is this possible? Seven of the eight series are close (sorry Predators fans), but many of the individual games have been blowouts.
So far 19 of the 28 games have resulted in victories by three or more goals. We have only seen four one-goal games, and only two overtime games.
It is bonkers.
–  We have four series tied 2-2, but only two of those 16 games have been close. Los Angeles won game one over Edmonton 4-3 and scored the winner with 5:14 remaining, and Toronto led game three of its series 3-2 before Ilya Mikheyev scored two empty net goals in the final two minutes. But the other 14 games haven’t been very close.
– The Carolina-Boston series has seen the home team win all four games. Carolina led 3-1 early in the third of game won before winning 5-1, and led 4-1 after 40 minutes and won 5-2 in game two. Boston led 3-1 after 40 minutes and made it 4-1 early in the third before winning game three 4-2. Game four was tied 2-2 after 40, but the Bruins scored two goals in the first five minutes and Brad Marchand added an empty netter to make it 5-2. No drama late in any of those games.
– Toronto and Tampa were close in game three, but Toronto won game one 5-0, while Tampa was leading 5-1 early in the third period of game two and was up 5-0 only 25 minutes into game four before coasting to a 7-3 victory.
– St. Louis shutout Minnesota 4-0 in game one, but then the Wild crushed the Blues 6-2 and 5-1 in games two and three. The Blues led game four 3-1 after 40 minutes, then the Wild did make it a one-goal game before David Perron potted his fifth of the playoffs to make it 4-2. Ryan O’Reilly scored a late empty-netter to make it 5-2. The three-goal margin of victory in game four was the smallest of the series.
– After a close game one, which LA won 4-3, the Oilers throttled LA 6-0 and 8-2 in games two and three, before the Kings dominated game four 4-0.
All four series are tied and seemingly could go either way, but the results of each game rarely show a competitive contest. It is rare.
The other four series will play their fourth game tonight, but they’ve at least had some close games.
– Colorado leads its series 3-0, but won game two in OT, and game three was tied 3-3 before Gabriel Landesdog make it 4-3 with 26 minutes remaining. The Avs led 6-3 by the 10-minute mark of the third. And they also dominated game one by a score of 7-2. Darryl Sutter is looking like a genius with his infamous “a waste of eight days” comment regarding whoever had to face the Avalanche. The Predators’ season could easily end tonight.
– Dallas and Calgary has been the lowest scoring series by far. Dallas has a total of six goals (two into empty nets), while the Flames only have three goals in three games. Jake Oettinger has stopped 90 of 93 shots (.969Sv%), while Jacob Markstrom has stopped 61 of 65 shots (.942Sv%). Calgary won game one 1-0, and Dallas has won 2-0 and 4-2, with an empty-netter in each game. All three games have been close, but offence has been hard to come by. It is interesting to note the Stars’ shots/game have gone up from 16 to 23 to 32 from game one to three, while Calgary’s shots on goal have gone the other direction. They fired 41, 29 and 26 from game one to three. This series has been close, but rather uneventful for long periods of play.
– Game one between Florida and Washington was close. The Caps used a three-goal third period to win 4-2. But games two and three were blowouts. Florida led 5-1 after 37 minutes of play and the game ended 5-1, while the Capitals won 6-1 in game three. The Panthers’ lack of offence in games one and three should concern Panther fans.
– New York and Pittsburgh had the marathon triple-overtime game one, but then the Rangers won 5-2 (with no empty netters) in game two. Game three was highly entertaining as the Penguins had an early 4-1 lead, before the Rangers tied it 4-4 at the 16-minute mark of the second period. Then the Pens scored three (two empty netters) in the third to win 7-4. The series has been, arguably, the most entertaining and competitive from game-to-game. 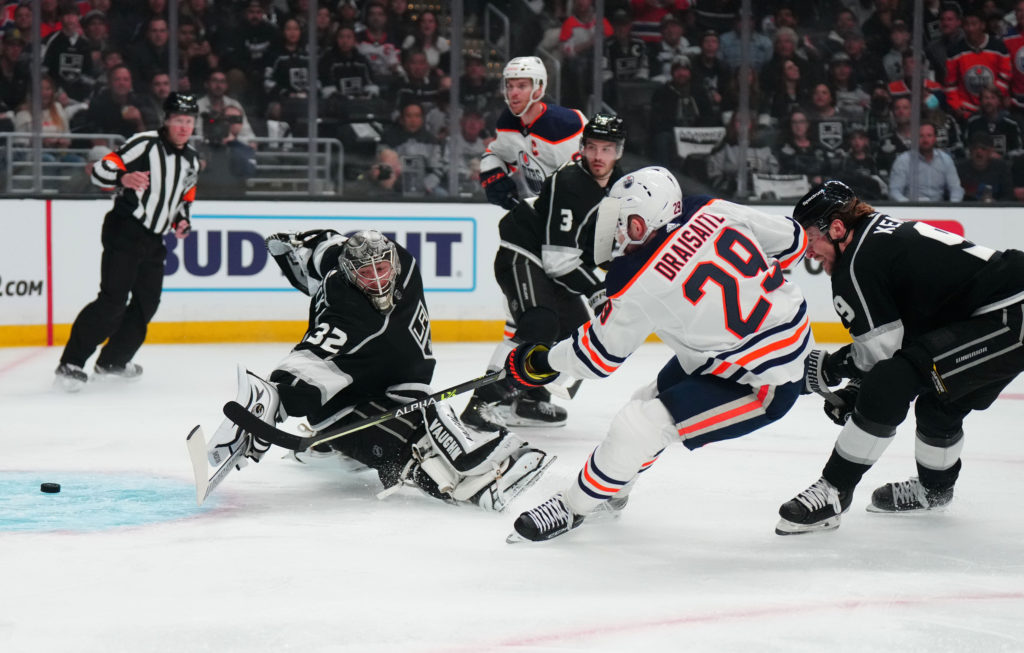 Teams who score first are 24-4 so far. The Hurricanes have scored first in all four games, but the Bruins managed to win twice. Florida and New York also lost once when scoring first.
But Colorado is 3-0, while Dallas, Edmonton, LA, Minnesota, St. Louis, Toronto and Tampa Bay are 2-0. Pittsburgh, Calgary, Washington are 1-0. Only Boston and Nashville have yet to score first.
The TOR/TB, MIN/STL, EDM/LA and COL/NSH series have yet to have a lead change during any of their games. The importance of the first goal has been massive.

Florida was the highest scoring team in the regular season at 4.11 goals/game and had the fifth-best PP at 24.4%. In the postseason they’re averaging only 2.67 goals/game and their PP sits at 0%. They want to lower their goals against, but if they don’t start scoring it won’t matter. They have no PP goals, while the Capitals have four. The Panthers combined special teams are 66.7%, while Washington is at 133.3%.
Calgary’s top-eight forwards combined for 216 goals in the regular season. They have two (Elias Lindholm has both) in three playoff games. Jacob Markstrom has only allowed four goals in three games, but the Flames trail the series 2-1. Prime example of why I’ve never fully agreed with “defence wins championships”. You need to be good offensively and defensively, and right now too many Flames forwards would be found on the side of milk cartons (missing persons).
Jack Campbell has an .889Sv% in four games for Toronto, but Andrei Vasilevskiy has an .888Sv% through four games. Campbell had a shutout in game one, and stopped 32 of 34 (.941Sv%) in game three and Toronto won both games. In the two losses Campbell has allowed 10 goals on 50 shots. Vasilevskiy hasn’t been all-world in any of the games. He allowed five goals in the opening game and three in each of games two, three and four. He’s posted Sv% of .844, .912, .912 and .880. He hasn’t been great despite Toronto not generating many high-danger chances.
The Bruins and Hurricanes have each had 22 high-dangers chances at 5×5 through four games. They are tied for lowest in the playoffs at 8.13/60, while Pittsburgh (18.25), Edmonton (17.9), Colorado (15.2), Los Angeles (14.8) and Tampa (14.3) are top-five. Toronto is at 8.9 (13th in playoffs), but they are 6th in actual goals scored.
The Hurricanes lead with 3.69 goals/60 at 5×5, despite having the fewest high-danger chances. I will discuss that with Kevin Woodley today on my radio show. Is Boston goaltending that bad, or is it bad luck?
Through 28 Stanley Cup playoff games, here is a look at the final scores.
Games decided by one goal: Four.
Games decided by two goals: Five.
Games decided by 3+ goals: 19.
Two OT games.
Four series tied 2-2 despite these big leads, and there is a chance we could have seven series tied at two if Calgary, Florida and New York win tonight. They are all on the road, but they are also the higher seed in their respective series.