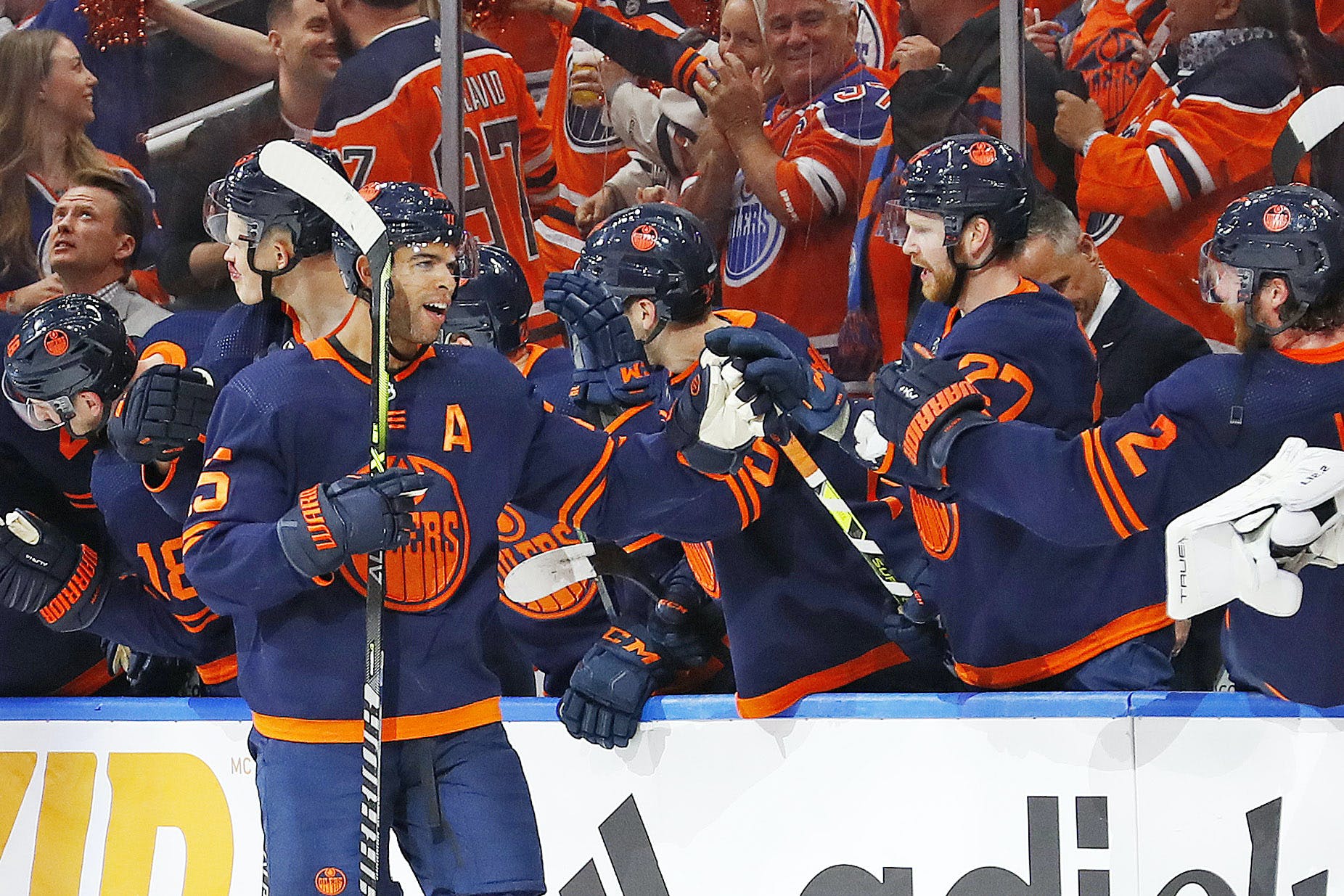 Photo credit: Perry Nelson-USA TODAY Sports
By Jason Gregor
8 months ago
Comments
The Oilers’ first power play unit has two goals.
Their second power play unit has two goals.
Their penalty killers, first, second and third units, have killed off every Los Angeles power play.
And Darnell Nurse scored a shorthanded goal.
Edmonton’s special teams have been outstanding through two games, and if that continues they will win the series.
Through 16 playoff games NHL teams are averaging 4.15 power play opportunities per game. The officials have done a great job thus far.
Here is a breakdown of each series.
22: Tampa (12)/Toronto (10)
20: Carolina (12)/Boston (8)
20: St. Louis (11)/Minnesota (9)
17: Colorado (9)/Nashville (8)
16: Edmonton (8)/ LA (8)
15: Calgary (8)/Dallas (7)
12: Florida (6)/Washington (6)
11: Pittsburgh (6)/New York (5)
Edmonton is 4-for-8 (50%), while the Rangers are 2-for-5 (40%) and Washington is 2-for-6 (33.3%).
Los Angeles, Dallas and Florida have yet to score on the man advantage, while Pittsburgh, Boston, Toronto, Nashville and Calgary each have one goal.
Advertisement
Ad
Advertisement
Ad
The Oilers also have the best PK thus far. Calgary and Washington are also perfect on the penalty kill, but Edmonton has scored a shorthanded goal so their net PK is actually 112.5%.
The Oilers’ PP success has come in part from their efficient puck movement, but mainly their willingness to shoot the puck. They have 18 shots in 12:41 of PP time, which gives them an 85.1 shots/60. LA has a 67.5 SH/60.
The Oilers’ power play (both units) has been very efficient and they’ve attacked from down low. Tyson Barrie doesn’t have a shot on goal, nor does Duncan Keith. Evan Bouchard has one. Their plan thus far has been to have the forwards shoot.
Leon Draisaitl has seven shots and two goals. The PP has been the most effective the past few seasons when Draisaitl is the primary shooter. What should concern LA is that the Oilers’ PP is 50% and McDavid doesn’t have a shot on goal yet. Ryan Nugent-Hopkins has four and Zach Hyman has three. The top unit has 14 shots in 7:37 of PP time. Hyman is the only player on either of the top two units without a PP point. Both units have involved everyone.
Advertisement
Ad
Advertisement
Ad
Not only is Edmonton pounding pucks on net on the man advantage, they have given up zero shots against. They’ve outshot LA 18-0 while on the PP. Meanwhile they have five shots, and one goal, on the penalty kill against the Kings. The Oilers’ PK has been very aggressive in the D-zone, but also when they get the puck. They aren’t just sitting back and dumping pucks in. When they have a chance to make a rush, they are.
The Oilers’ special teams have been a major advantage through two games.

Kane – McDavid – Puljujarvi
Hyman – Draisaitl – Yamamoto
Archibald – RNH – Ryan
Foegele – McLeod – Kassian
Nurse– Ceci
Keith – Bouchard
Kulak – Barrie
Smith
No reason to change anything. Every player was a positive contributor in game two. Odd stat, but the Oilers dominated so much at 5×5 in game two that McDavid had the lowest SF% on the team at 45.8%. I don’t have time to go back through every game, but I’d bet that is the first time that’s every happened. He outscored Kings 2-0 at 5×5 and had an xGF% of 60.9%, but was outshot 11-9. The Kings had 10 skaters below 45.8SF%, which illustrates how much all four of the Oilers lines controlled the game at 5×5.
Advertisement
Ad
Advertisement
Ad
Philip Broberg was recalled, but he won’t play. They are just giving him some extra time around the team and to watch the games in person. Bakersfield swept Abbotsford in two games, and don’t play again until early next week, so this gives Broberg a few days to be around the team before.

Athanasiou – Kopitar – Kempe
Moore – Danault – Iafallo
Grundstrom – Lizotte – Brown
Lemieux – Kupari – Kaliyev
Anderson – Durzi
Edler – Roy
Maatta – Spence
Quick
The only lineup change for the Kings is Rasmus Kupari draws in on the fourth line for 19-year-old Quinton Byfield. The Kings have last change and we will see if there are any matchups Todd McLellan really wants.