My New Years Resolutions for the Oilers By Tyler Yaremchuk
11 months ago
The turning of the calendar to a new year is always a good time to both reflect and look forward. That is exactly what I’m going to be doing here with my Edmonton Oilers 2022 New Years’ resolutions.
The last twelve months were filled with plenty of positives for the hockey team. Connor McDavid continued to dominate the NHL, Jesse Puljujarvi went from an afterthought to a key contributor, and Darnell Nurse became a legitimate top-pairing defenseman.
There were also plenty of negatives. The team didn’t win a playoff game, they lost Adam Larsson in free agency, and now even after a great start to the 2021-22 campaign, they find themselves just holding on to the final playoff spot in the Western Conference. That’s not good enough for a group that has Connor McDavid and Leon Draisaitl.
So what should the team be striving for in 2022? What do they need to better if they want to not only make the playoffs but win a round (or maybe more)? Here’s what I got:

How sick are we of talking about this? So far this season, the Oilers have only led after the first period ten times. Now, they are a perfect 10-0-0 in those games but the big issue is that in 66% of their games they’re either trailing or tied after the opening frame and in the games where they’ve been down after 20, they’re 0-11-0.
They’ve consistently been forced to chase games because of their poor starts and it’s cost them valuable points in the standings. They need to be better out of the gates.
What’s the reason? Well, nobody really knows. I don’t buy that it’s all on coaching or on the leadership group. That’s just not really how things work. If the coach has to come in before every single game and give a massive hype speech to get the team ready to play, then that says a lot about the team.
Perhaps it comes down to preparation or something else, but the bottom line is that the Oilers need to do a better job of showing up to games on time. If they can figure that part of their game out, then they will win a hell of a lot more games than they lose in 2022. 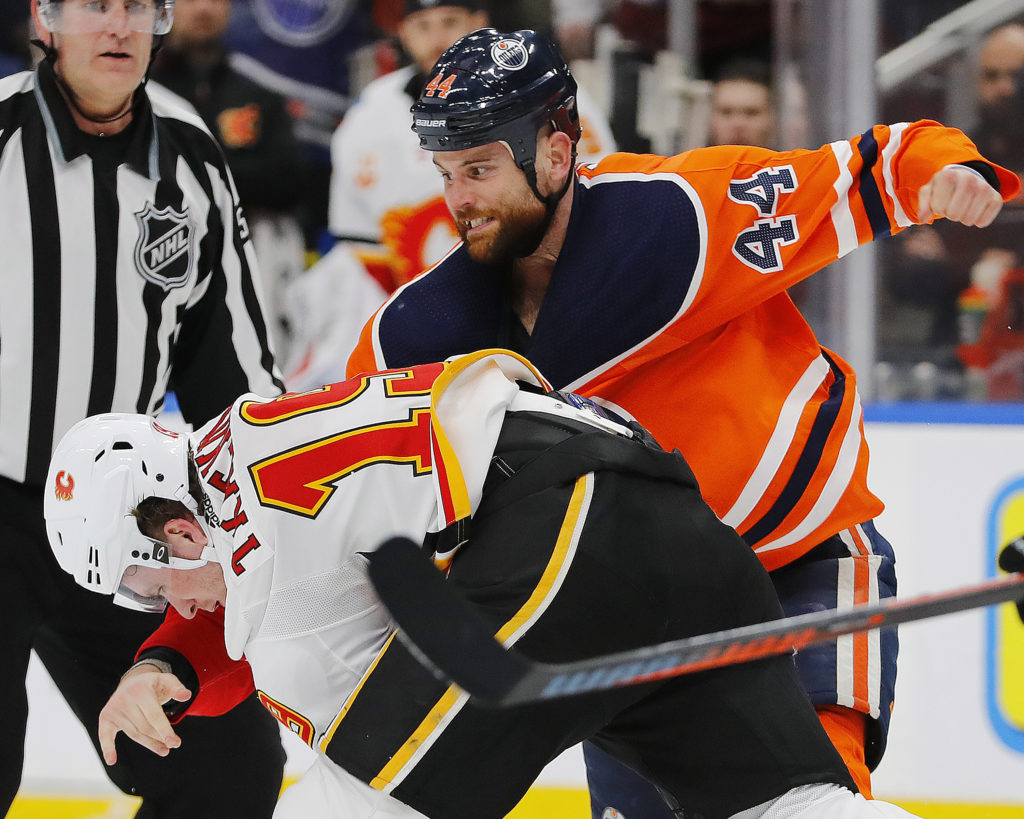 Jan 29, 2020; Edmonton, Alberta, CAN; Edmonton Oilers forward Zack Kassian (44) and Calgary Flames forward Matt Tkachuk (19) fight during the first period at Rogers Place. Mandatory Credit: Perry Nelson-USA TODAY Sports
Early in the season, we got into a heated debate on the Real Life Podcast centered around the Oilers lock of toughness. I was adamantly against the idea that it was an issue because the team was winning games. I said I didn’t care that they weren’t starting scrums after the whistles because I’d rather have a team that focuses on scoring goals, not getting into side battles.
Well, now that we’ve seen the team go through some tough stretches and one of the things that have really bothered me about watching them lose games is that on a lot of those nights, they don’t seem to have any sort of push back. When they’re down by a goal or two, there isn’t anyone on this team who seems to be willing to spark the group with a big hit or by mixing it up after the whistle.
It’s not the reason they’re losing games, but I would like to see this Oilers team be a little more aggressive on the ice. It’s a little thing but it would make them harder to play against.
I also want to see this organization get more aggressive off the ice in a couple of different ways. First, Ken Holland should be going all in at this year’s deadline. Last year, he made the point that you can’t go all-in every year and while that quote was met with some stark criticism from portions of the fan base, I kind of understood it.
You only get so many first-round picks and you only have so much cap space. If you go all in every single year, then your system will dry up and you won’t have a next wave of young talent coming up.
This year, however, there are no excuses. Holland had a plethora of cap space in the offseason and I would hope he has a plan to be able to create some extra wiggle room at the deadline. For example, he could include Mikko Koskinen’s contract in a deal. Money really shouldn’t be an issue.
As for assets, it’s easy to see that their prospect pool is pretty full. Up front, they have high-end pieces like Dylan Holloway and Xavier Borgeault along with some really solid ‘B’ level prospects like Raphael Lavoie, Carter Savoie, Tyler Tulio, and Matvei Petrov. They could certainly dangle one of those ‘B’ level pieces in a deal.
On the blueline, they have Philip Broberg and Dmitry Samorukov. They should be very willing to move one of those two pieces and I would suspect that Samorukov is a very realistic option to be moved for immediate help.
I can understand wanting to hold onto Broberg and Holloway, simply because they’re so close to contributing at the NHL level and having good, young players that can make an impact on your NHL roster while still on their entry-level contracts is very important.
Every other prospect and every other draft pick that the Oilers have should absolutely be on the table at this year’s trade deadline.
I would also like to see the organization get a little bit more aggressive in terms of their in-game experience for fans. Right now, the game day presentation often feels repetitive and considering the world-class facility they have, that shouldn’t be the case.
They should also get more aggressive when it comes to filling up the building every game. I understand that there are currently restrictions in place, but earlier this season there were a lot of empty seats at pretty much every game. Why not bring back cheaper game-day seating? Or start partnering up with local companies to make sure that no seat goes unfilled for a game?
I get that season-seat holders might not love the idea of some fans getting into the building for under face value on some nights, but I think having more die-hard fans in the building should be the priority. Rogers Place should be rocking almost every single game in 2022. 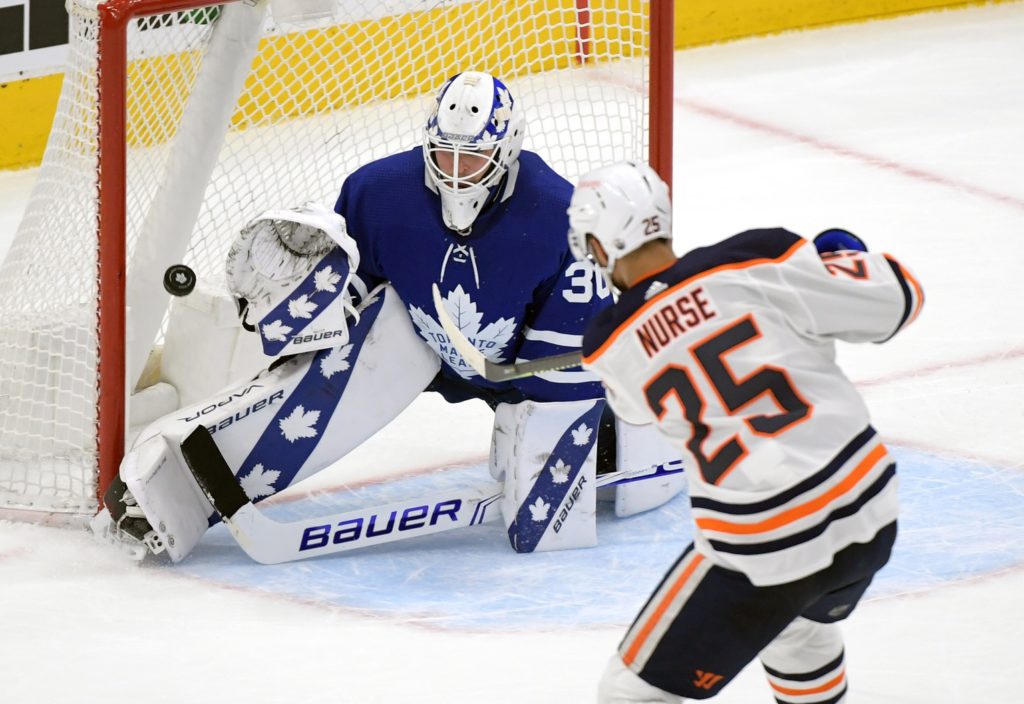 Mar 29, 2021; Toronto, Ontario, CAN; Edmonton Oilers defenseman Darnell Nurse (25) scores the game winning goal past Toronto Maple Leafs goalie Michael Hutchinson (30) in overtime at Scotiabank Arena. Mandatory Credit: Dan Hamilton-USA TODAY Sports
Alright, back to the on-ice stuff. I hate the people in the crowd who yell “shooooooot!” whenever the Oilers have the puck in the offensive zone. It’s very annoying. However, I do think the Oilers would benefit from putting more pucks on net and having more of a shot-first mentality at times.
Despite the fact that they have one of the best top-sixes in the league talent-wise, they are just 17th in 5v5 shots for/60. That’s not good enough.
How many times have you watched either Connor McDavid or Leon Draisaitl come in on an odd-man rush and you just know in your head that they’re going to pass the puck no matter what? It happens and I know it sounds weird for me to be critiquing those two, but I really do think that they should use their shots more. It would make them more unpredictable and if you make the other team think that there’s a good chance you’re going to shoot the puck, then more passing lanes will open up.
The same goes for their powerplay. I think they will only be more productive if they just start ripping the puck more often.
That’s all for my 2022 New Years resolutions for the team, but I would love to know yours! HIT ME UP IN THE COMMENTS!
Nation Takes
Oilers Talk
Recent articles from Tyler Yaremchuk