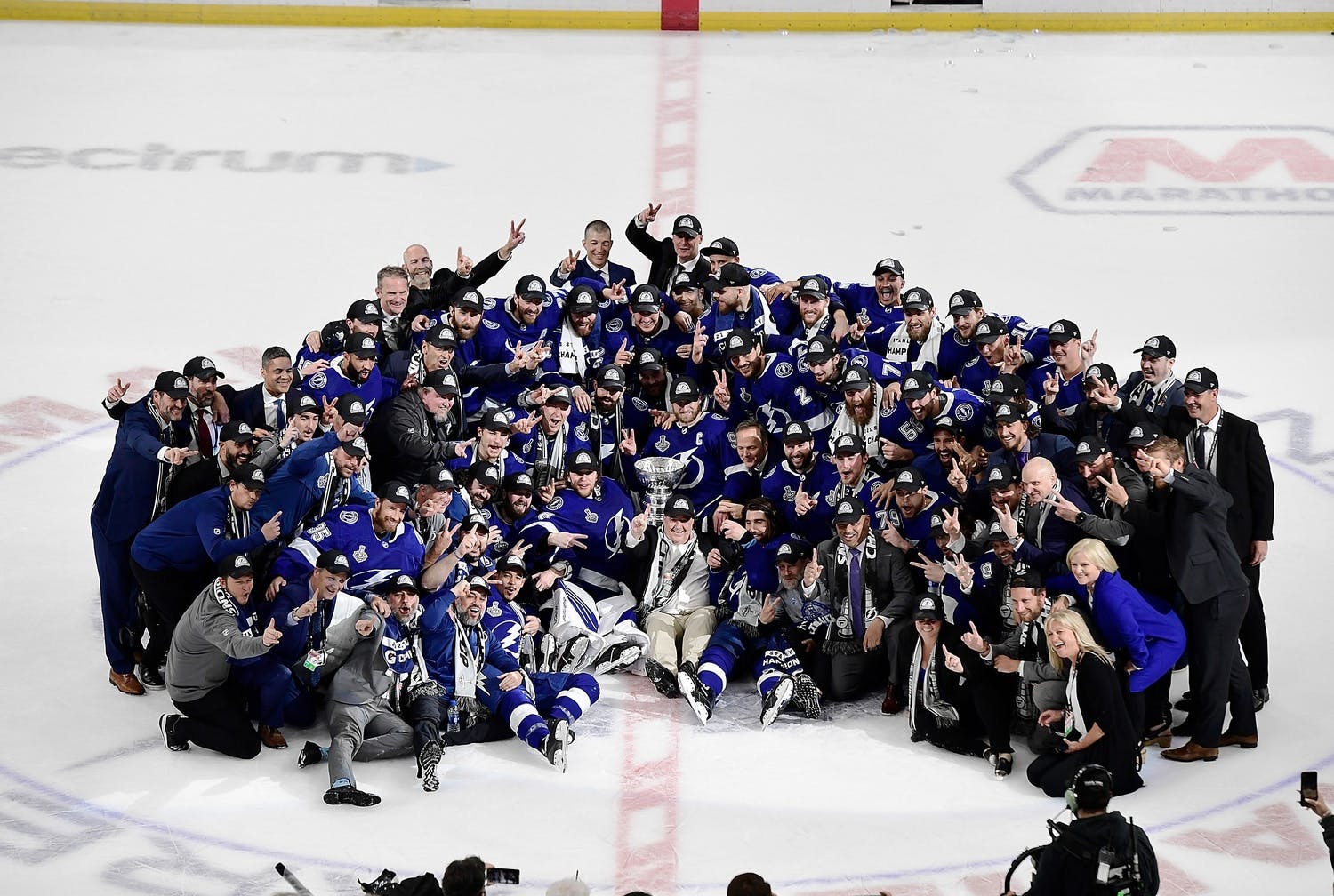 By Robin Brownlee
1 year ago
Character. When you talk about intangibles, as we have around here often lately amid speculation the Edmonton Oilers are in pursuit of veteran defenceman Duncan Keith, it’s at the top of the list of traits successful teams have in spades. While there isn’t only one way to define character, no exact way to measure it, I know it when I see it. So do you.
I saw plenty of it watching the Tampa Bay Lightning dispatch the Montreal Canadiens in five games to claim their second straight Stanley Cup. As you’d expect, the Lightning were pounding beers and talking about character last night. Among them, former Oiler Pat Maroon, the hulking winger who sipped from the silverware for a third straight season. Big Rig, it’s safe to say, is one of those guys who fits that character guy role.
To be clear, the Lightning are NHL champions because they have ridiculous talent in Nikita Kucherov, Steven Stamkos and Brayden Point. They have depth up front and a blueline group led by Victor Hedman that’s as good as any in the league. The Lightning also have the best goaltender in the game in Andrei Vasilevskiy, the Conn Smythe Trophy winner who is basically the Mariano Rivera of the blue paint when the money is on the table.
Character – we saw it from the Habs this post-season — isn’t a substitute for skill. You can have all the character in the world, a roster full of try-hard, never-quit guys, but if you don’t have enough talent, enough horses, you aren’t going to overcome a superior team if the deficit it too wide. Character in itself doesn’t take the place of skill, it complements it. That’s what makes the Lightning so formidable. They have both. Character, even if you can’t measure it, matters. 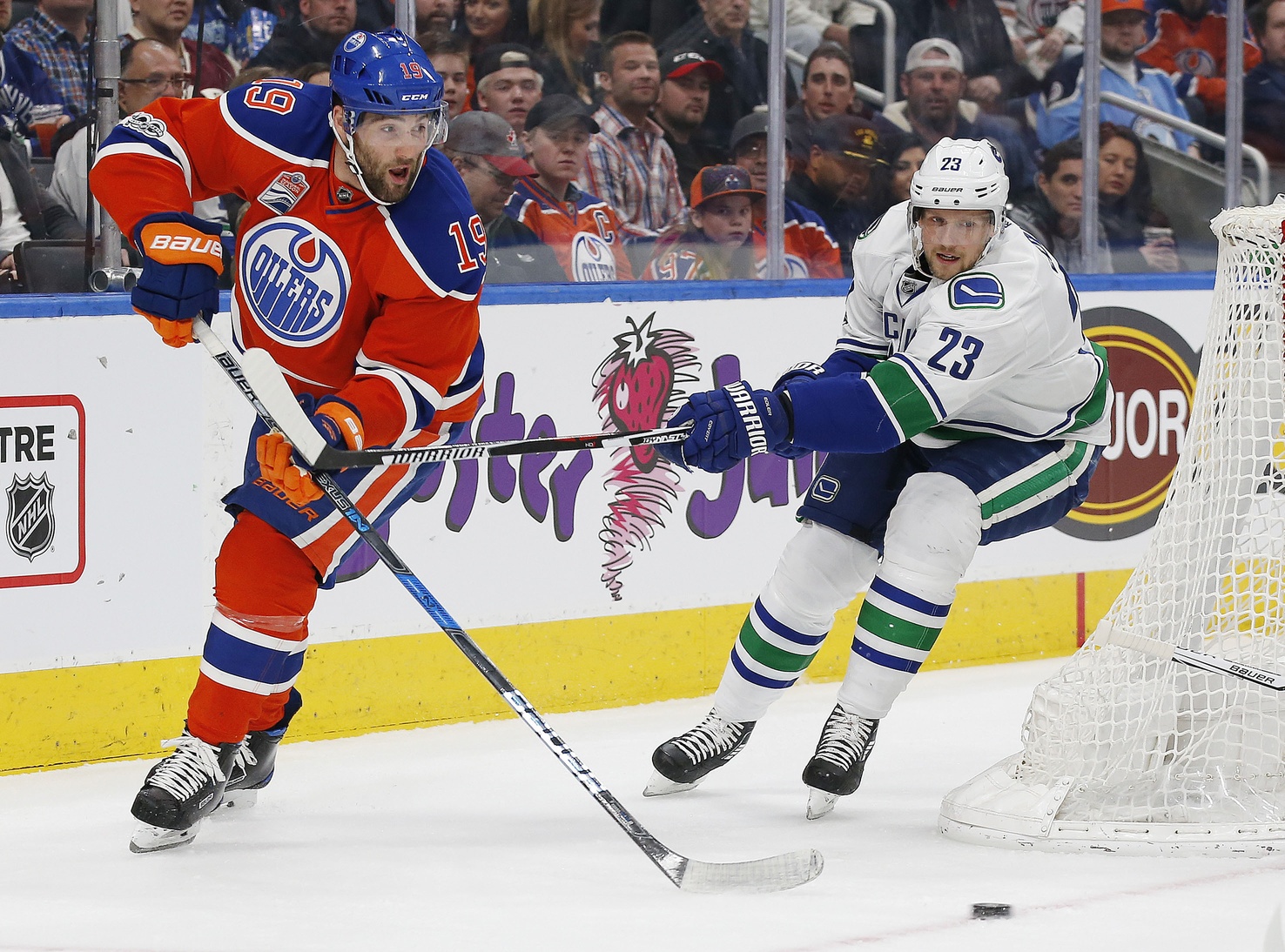 Photo:Perry Nelson/USA TODAY Sports
“Character does matter. I think it goes a long way,” said Maroon, who played 154 games with the Oilers before being traded to the New Jersey Devils by Peter Chiarelli back in February 2018. “You need guys like that in the locker room. You need guys, a bunch of other guys to push the superstars and make them play the right way. And we have character guys that do that. So, I’m pumped and, you know, I’m just proud of these guys.”
Maroon, who is the first player to win three straight Cups with two different teams – St. Louis in 2019 and Tampa Bay these last two years – in the post-expansion era, is well down the marquee with the Bolts, but he bangs and grinds a lot and scores a little on a $900,000 ticket in coach Jon Cooper’s bottom six. Every team that contends for the Cup has guys like Maroon.
“Guys are stars in different ways. You can’t sit here and judge a guy because if he doesn’t get 100 points, he’s not a star player,” Cooper said. “There’s guys that are stars in the room. There’s guys that are stars on the bench, and when you get to the situation we are in and Montreal is in, guys pitch in in different ways. Patty, guys gravitate to him. He’s always saying the right things when it’s needed, and he’s got swag to him. So, he’s a star in our book.”
Maroon, now 33, had the best season of his career statistically with the Oilers in 2016-17, putting up 27-15-42. Traded to the Oilers by Anaheim February of 2016, Maroon hasn’t matched those numbers in stops with New Jersey, St. Louis and Tampa Bay, but he’s seen his name engraved on the mug three times.
Maroon can still play, but he’s a glue guy now. He’s one of those intangibles guys – whether you call it character, leadership, experience or all three – the really good teams have playing behind their top-end talent. He’s a player that teams like the Oilers need to round out their rosters to get to where they want to go.
“I’ve been very fortunate,” Maroon said. “I’m very blessed to be a part of three runs and three very good teams. You may not see me on the score sheet, but I try to bring a different element to the room and chip in when I can and just kind of relax the team a little bit.” 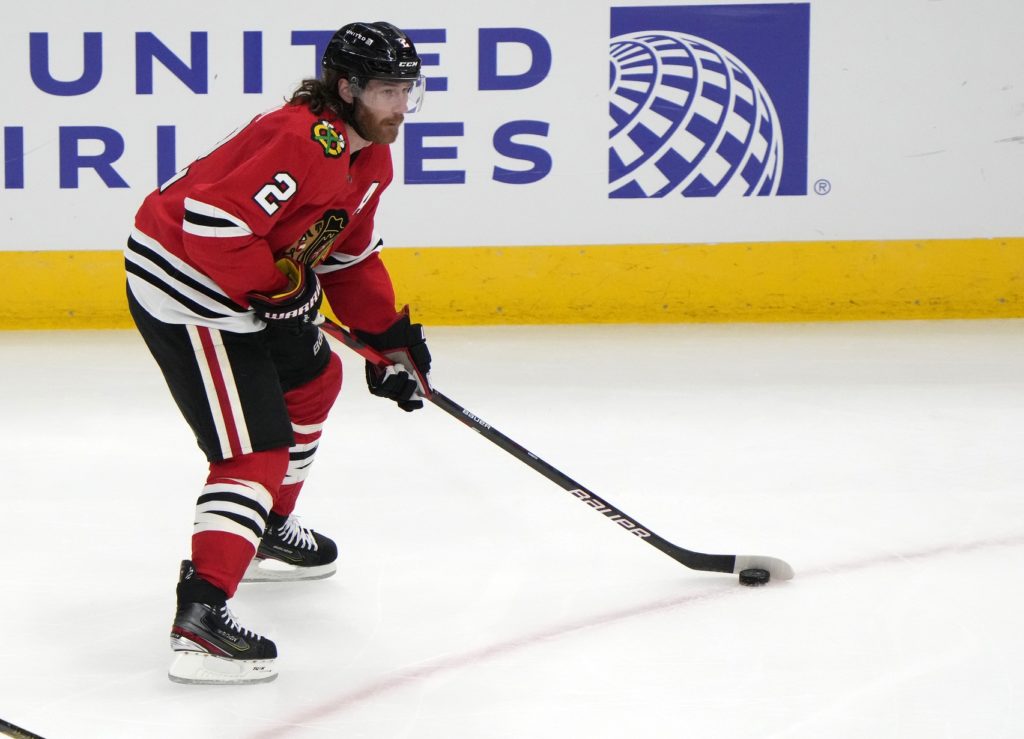 Apr 6, 2021; Chicago, Illinois, USA; Chicago Blackhawks defenseman Duncan Keith (2) shoots the puck against the Dallas Stars during the second period at the United Center. Mandatory Credit: Mike Dinovo-USA TODAY Sports
I’m not going to rehash the whole debate about the Oilers having interest in Keith because that’s been done, but I am going to circle back to him – you knew I would. Keith and Maroon are obviously completely different players with completely different price points, and that’s no small detail. I’ve got no interest in bringing in Keith at this point in his career if it means taking a $5.5 million AAV for two years without shedding some salary by way of retention or sending a bad contract the other way.
What I don’t dismiss is adding character, experience and leadership to a roster Ken Holland is trying to shape into a contending team if it can be done at a reasonable price. There is value in that as long as Keith still has enough in the tank to play a reduced role after terrible advanced statistics last season. You’re not seeing the whole player if you ignore the numbers, but the same holds true if you dismiss intangibles like character. Measurable or not, it matters.