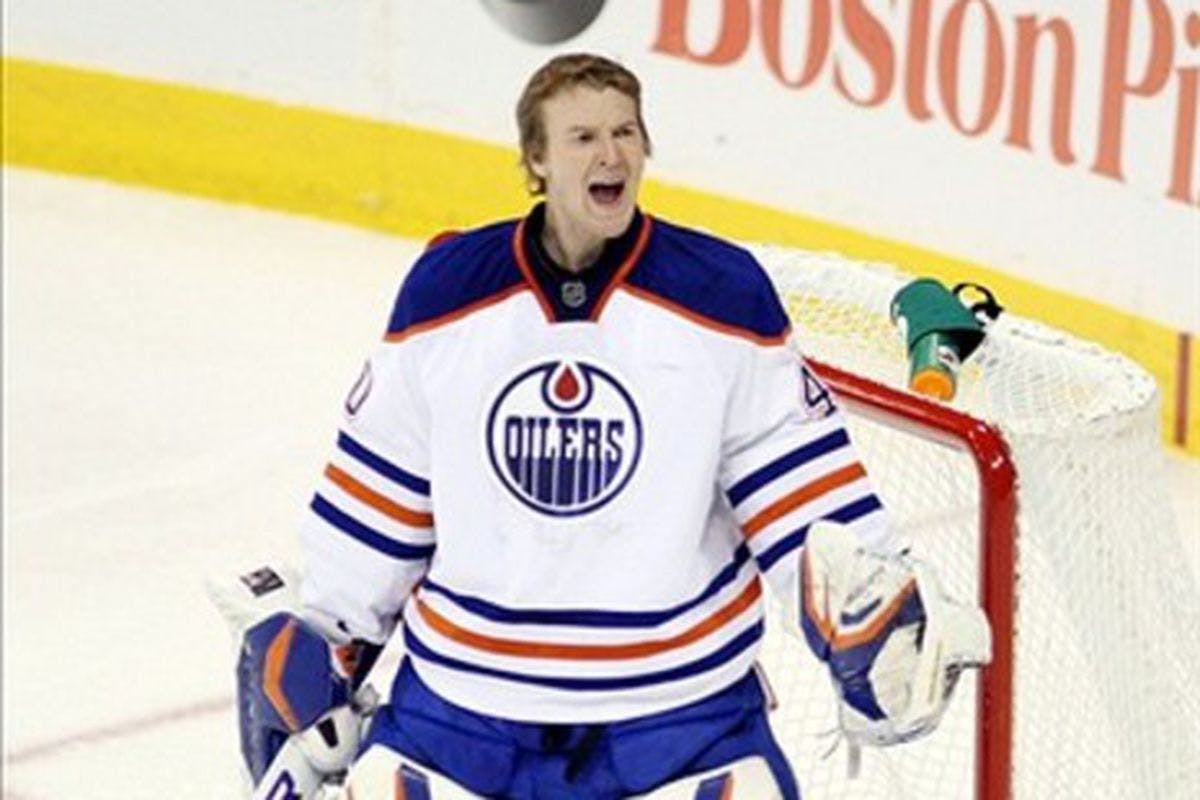 By Zach Laing
2 months ago
Former Edmonton Oilers defenceman Ethan Bear was dealt Friday being shipped from the Carolina Hurricanes to the Vancouver Canucks.
The Hurricanes retained $400,000 of Bear’s $2.2-million contract in exchange for a fifth-round pick, while also sending AHL forward Lane Pederson.
Here’s some of what Faber wrote about the deal at CanucksArmy:

Bear should immediately jump into the Canucks’ lineup and could end up finding himself a tremendous opportunity if he is given a chance to skate with Quinn Hughes at some point.
After a down season in 2020-21, Bear had a decent bounce-back with the Carolina Hurricanes last season, where he put up five goals and nine assists in 58 games with the Canes. This year, Bear has struggled to get into the lineup. He has been beaten out by former Canuck Jalen Chatfield at the bottom end of the Canes’ defence corps.
The Canucks are likely hoping that another change of scenery helps Bear get back to being a promising young player like he was in 2019-20 when he had 21 points in 71 games with the Edmonton Oilers while playing top four minutes.
Bear stands at 5’11”, was born in Regina, Saskatchewan, and played his junior hockey for the Seattle Thunderbirds in the WHL.

Devan Dubnyk has officially retired from the NHL and is entering the world of broadcasting. Drafted by the Oilers 14th overall in the 2004 draft, Dubnyk spent the first four and a half seasons of his career with the team.
He broke into the NHL in 2009-10 and was eventually traded to the Nashville Predators on Jan. 15, 2014 in exchange for Matt Hendricks. Over his time with the Oilers, he posted a 61-76-21 record across 171 games played while posting a .910 save percentage and 2.88 GAA.
The 2014-15 campaign was his best in the NHL when he started the year with the Arizona Coyotes before joining the Minnesota Wild. He posted a 36-14-4 record, a .929 save percentage and a 2.07 GAA. He was named third in Vezina voting, was named to the second all-star team and won the Bill Masterton Trophy.
Here is some of what DailyFaceoff’s Steven Ellis wrote about it:

In an interview with Dane Mizutani of the St. Paul Pioneer Press, Dubnyk reached out to his agent about potentially starting a television gig at the NHL Network. One Zoom call later, and he was acting as an analyst for a playoff game between the Edmonton Oilers and Calgary Flames.
Yesterday, Dubnyk made his regular season debut analyzing the Ottawa Senators and Minnesota Wild game, featuring a team he played his best career hockey with.
“It’s been fun to stay in the game,” Dubnyk told Mizutani. “There were some nerves going in. Now, getting a chance to do it more, I’ve been able to put my own personality in there. I’m really enjoying it.”

What’s next for the Sens?

After a hot start, the Ottawa Senators got tough news this week with Josh Norris likely to miss the rest of the season with a shoulder injury.
According to DailyFaceoff’s Steven Ellis, it could mark a great chance for Shane Pinto to excel:

Now that Norris’ prognosis is a bit clearer – and by that, we’re talking calamitous – the Senators need to address a significant loss in the lineup while the season is still fresh.
According to CapFriendly, the Senators have $4.113 million in projected cap space, giving them a little wiggle room to make a move. Once Norris is put on LTIR, that’ll clear up around $7 million.
But, hear me out: maybe the team doesn’t need to move assets to fill the gap. Maybe Pinto has that covered himself.
Pinto has five goals and six points in seven games with the Senators while playing on the team’s third line. And that’s working alongside Tyler Motte and Mathieu Joseph. So think about the impact he’d have with Claude Giroux – one of the best playmakers of his time – and Alex DeBrincat, a pure goal-scorer. Tim Stutzle is the No. 1 center, but Pinto can easily be the No. 2 guy.