By Robin Brownlee
10 months ago
Even with Dave Tippett out of the picture with the Edmonton Oilers in favor of Jay Woodcroft, it seems to me veteran goaltender Mike Smith is still getting more opportunity than he’s earned this season. On the flipside, Stuart Skinner seems to be getting less.
Called up from AHL Bakersfield again when Smith took ill last week, I thought we might see a tandem of Mikko Koskinen and Skinner take a run going into the stretch drive, but no. When the puck dropped against the Tampa Bay Lightning last night, it was Koskinen in the crease on the way to a 4-1 win. Smith was on the bench and Skinner was back in Bakersfield yet again.
I understand why a veteran like Smith gets the nod over a youngster like Skinner, who hasn’t established himself, when things are too close to call, but that’s not the case here. Skinner, 23, is 6-6-0 with a 2.62 GAA and .913 save percentage this season. Smith, 39, who has been slowed by injury and illness since the third game of the season, sits at 5-8-1 with a 3.57 GAA and .891 in 15 appearances. That’s not close.
Smith has been handed multiple chances to reclaim the crease and he hasn’t done it. We’re at a point in the season with the Oilers in a playoff push where starting the goaltender who gives you the best chance to win has to trump giving Smith yet another chance to regain his form. Smith is 1-4-0 with save percentages of .857, .931, 818, .429 and .900 in his last five games.
The bottom line is the Oilers are trying to stay in the Western Conference playoff picture with just 23 games remaining. Woodcroft can’t be gifting Smith starts hoping for a turnaround. What Smith did last season or in years past doesn’t matter. Woodcroft should be going with the best tandem here and now. That’s Koskinen and Skinner.

Maybe I’ve got blinders on, but I get weary of suggestions made by MSM types from time to time that Auston Matthews is as good or better than Connor McDavid. One of the latest came from old school scribe Stan Fischler last week. A better goal scorer? Sure, that’s fair, but in what other aspect of the game is it even close?
We get the same Matthews wind blowing out somebody’s ass west from the 416 like clockwork at some point every season, but Fischler isn’t part of that mix. He spent his career in the New York area covering the Rangers, Islanders and Devils. Does he actually believe the “answer depends on the week?”
When I look at McDavid’s numbers compared to those put up by Matthews and the individual awards each of them has collected to this point — McDavid has won the Hart Trophy twice and the Art Ross Trophy and Ted Lindsay Award three times while Matthews has a Calder Trophy and Rocket Richard Trophy — he’s head and shoulders the superior player.
I don’t know what modelling Dom Luszczyszyn of The Athletic used in a YouTube clip from Jan. 2021 that gave Matthews an edge or what Stan based his tweet on, but it is fair to say these guys are at opposite ends of the hockey media spectrum — yet both apparently see it a lot closer than I do. What am I missing? 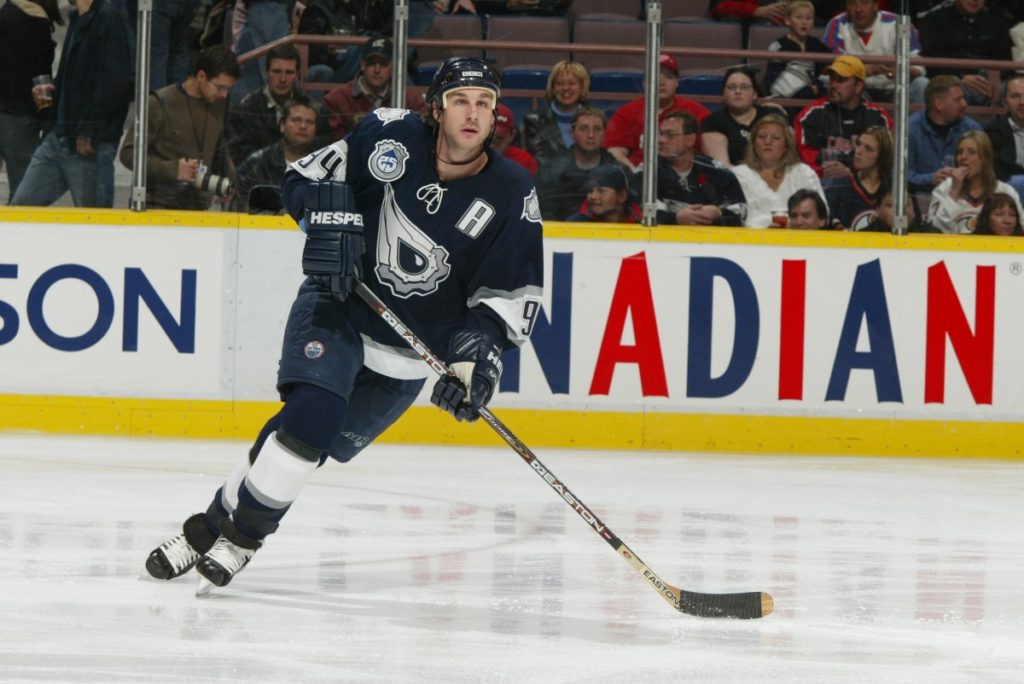 Ryan Smyth looks for a pass in the Oilers third jersey designed by Todd McFarlane.
I remember the buzz when it was originally announced EIG member and comic book creator Todd McFarlane planned to design a jersey for the Oilers more than 20 years ago — one that was unveiled Oct. 26, 2001. I’m curious what the updated version we’re hearing about will look like.
Speculation is the gear design logo on the front will stay but we’ll see a “color twist.” I’m not exactly sure what that means, but that’s the opposite of what I’m hoping for. I like the darker blue with the silver and white as well as the shoulder patches and the laced neck opening, but I think the front logo is hideous.
I understand the thinking that went into the gear design, and I’ve got a Mike Comrie version in my office, but I just never warmed up to it. I’d prefer something closer to the standard round logo. I know, not exactly cutting-edge stuff, but a degree of familiarity works for me.