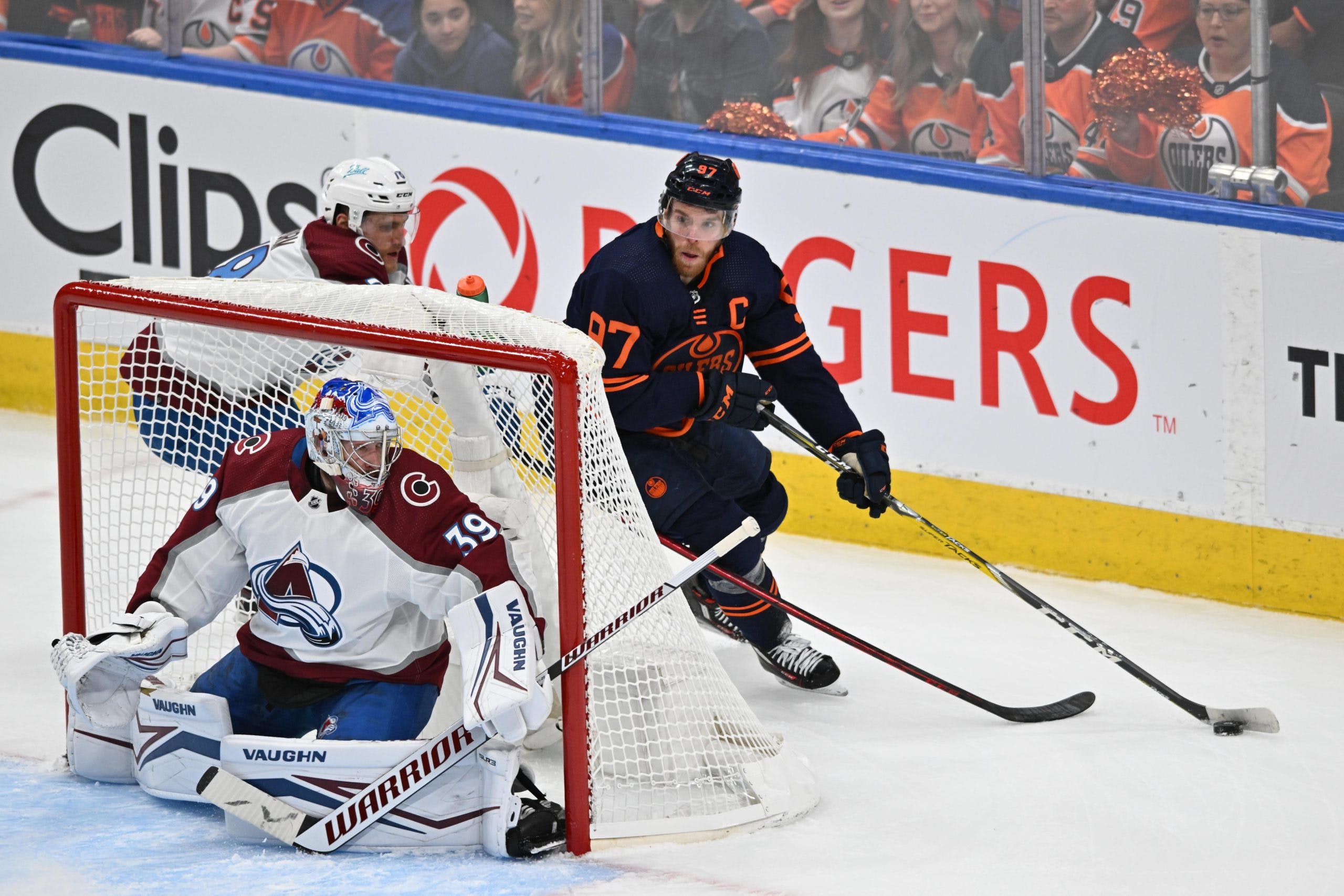 By Robin Brownlee
7 months ago
The Edmonton Oilers are going to be a better team down the road because of the lessons they’re learning against the Colorado Avalanche right now, but that’s a consolation prize that isn’t going to help them win their Western Conference final against the Avs after a 4-2 loss last night in a series they trail 3-0 today.
The Oilers need a historic comeback to get back to a Stanley Cup final for the first time since 2006. No team has overcome a 3-0 deficit in a conference final and they are 0-for-4 in series they’ve trailed 0-3. The Avs, meanwhile, are looking to get back to the Cup final for the first time since they hoisted the silverware in 2001. They can complete a sweep of the Oilers Monday.
While it’s cold comfort for Oilers fans right now in the wake of a game that started with a bang on a goal by Connor McDavid just 38 seconds in, the Avs have had more than their share of lessons learned without a Cup celebration to show for a lot of really good seasons since that 2001 championship. For starters, look at Colorado’s defensive play in this series. These are the lumps teams take along the way.
Down 2-1 on a pair of goals by Valeri Nichushkin, including one on a lucky bounce off Darnell Nurse’s stick, I thought the Oilers might make a series of it when Ryan McLeod sifted a wrist shot past Pavel Francouz to make it 2-2 and ignite the crowd with less than 13 minutes to play. You know, momentum and that. Well, not so fast. 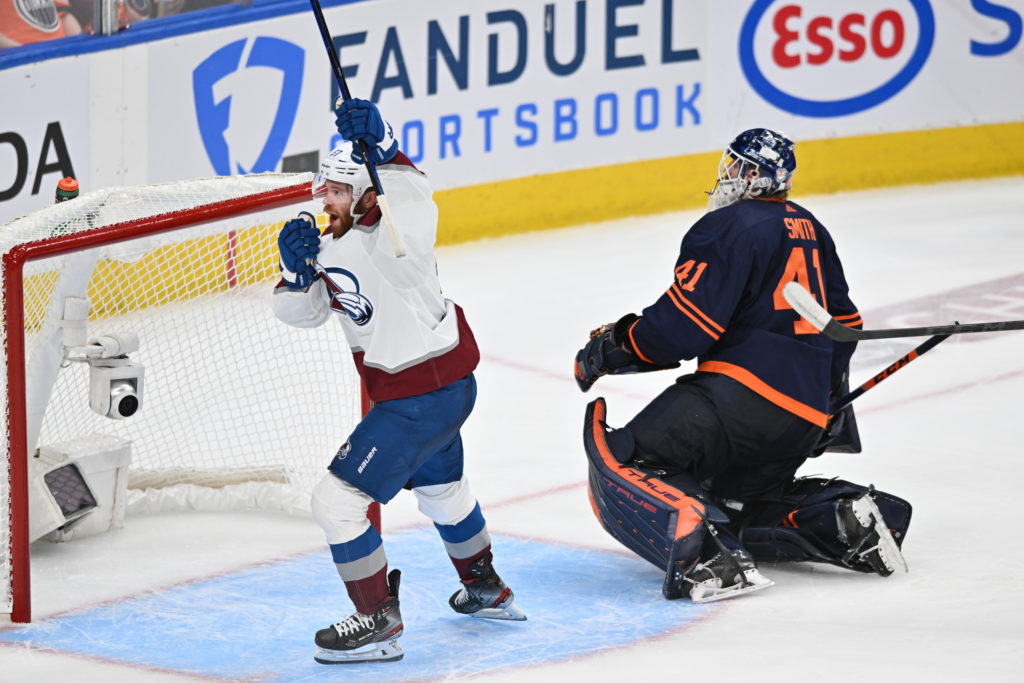 Jun 4, 2022; Edmonton, Alberta, CAN; Colorado Avalanche left wing J.T. Compher (37) celebrates a goal in front of Edmonton Oilers goaltender Mike Smith (41) in the third period in game three of the Western Conference Final of the 2022 Stanley Cup Playoffs at Rogers Place. Mandatory Credit: Walter Tychnowicz-USA TODAY Sports
Colorado, without starter Darcy Kuemper, defenceman Samuel Girard and Nazem Kadri, knocked out of last night’s game on a dangerous hit by Evander Kane, went ahead to stay when Evan Bouchard rattled a shot off the post, then lost a puck battle with J.T. Compher, who made it 3-2 with a shot Mike Smith absolutely had to have.
“It’s a game of inches and obviously it showed there,” McDavid said of the play that led to the goal by Compher. “An inch on the other side for (Bouchard) and it’s in and we’re up 3-2 and it’s a different conversation here.”
Smith has certainly had his moments and he’s faced 40-or-more shorts in every game in this series, but he had to make that save. “It’s not over until you lose four,” he said. Sure.
“Obviously, not a great situation to be in to go down three,” said McDavid of needing four straight wins to stay alive. “The series isn’t over, obviously. We’ve got to go one at a time here.”

A tip of the cap to Calgary Flames coach Darryl Sutter, voted the Jack Adams Award winner as coach of the year this week after 20 seasons as an NHL coach. A nice touch by the NHL having brother Brian Sutter, the 1991 Adams winner, present the award via video.
Sutter, 63, coached the Flames to a 50-21-11 record after taking over from Geoff Ward during the 2020-21 season and missing the playoffs. I recall some pointed back-and-forth with a reader here who insisted the game had passed Sutter by and took issue with my suggestion he’d turn the Flames around and make the playoffs.
It turns out I was a season early with that projection, but there’s no question there’s some buzz back in the BOA now after the Oilers eliminated the Flames in five games in the second round. That’s a good thing for Calgary and Edmonton.
As an aside, Jay Woodcroft finished tied for 12th in voting with Bruce Boudreau of Vancouver with five points.

As somebody who has struggled with the effects of multiple concussions since my early 20s, I’m not exactly impartial on the topic of head trauma in sports. Framed in that, I didn’t much like the hit Gabriel Landeskog laid on Kailer Yamamoto Thursday. It wasn’t a headshot, as in the head being the initial point of contact, but it was a blindside hit. A predatory hit – like Kane on Kadri.
We know enough about the long-term impact of brain injuries to know we don’t need that kind of hit in the game. There are enough risks, including the possibility of concussion even when there isn’t contact directly with the head, without allowing blindsides. We can have a robust, physical game without allowing one player to blow up another when he isn’t even looking.

Much has been made about Woodcroft’s penchant for standing during his post-game and other media availabilities. This tidbit from Elliotte Friedman’s 32 Thoughts on that: “5. A few of you have asked why Woodcroft always stands during media availabilities. He had back surgery several months ago, which makes total sense.” That, I didn’t know.

This account of the Humboldt Broncos bus crash in April 2018, titled TWO FATHERS, in Esquire Magazine is brilliantly written with a focus on the aftermath of the tragedy through the eyes of former Oiler Chris Joseph and Scott Thomas and their families.