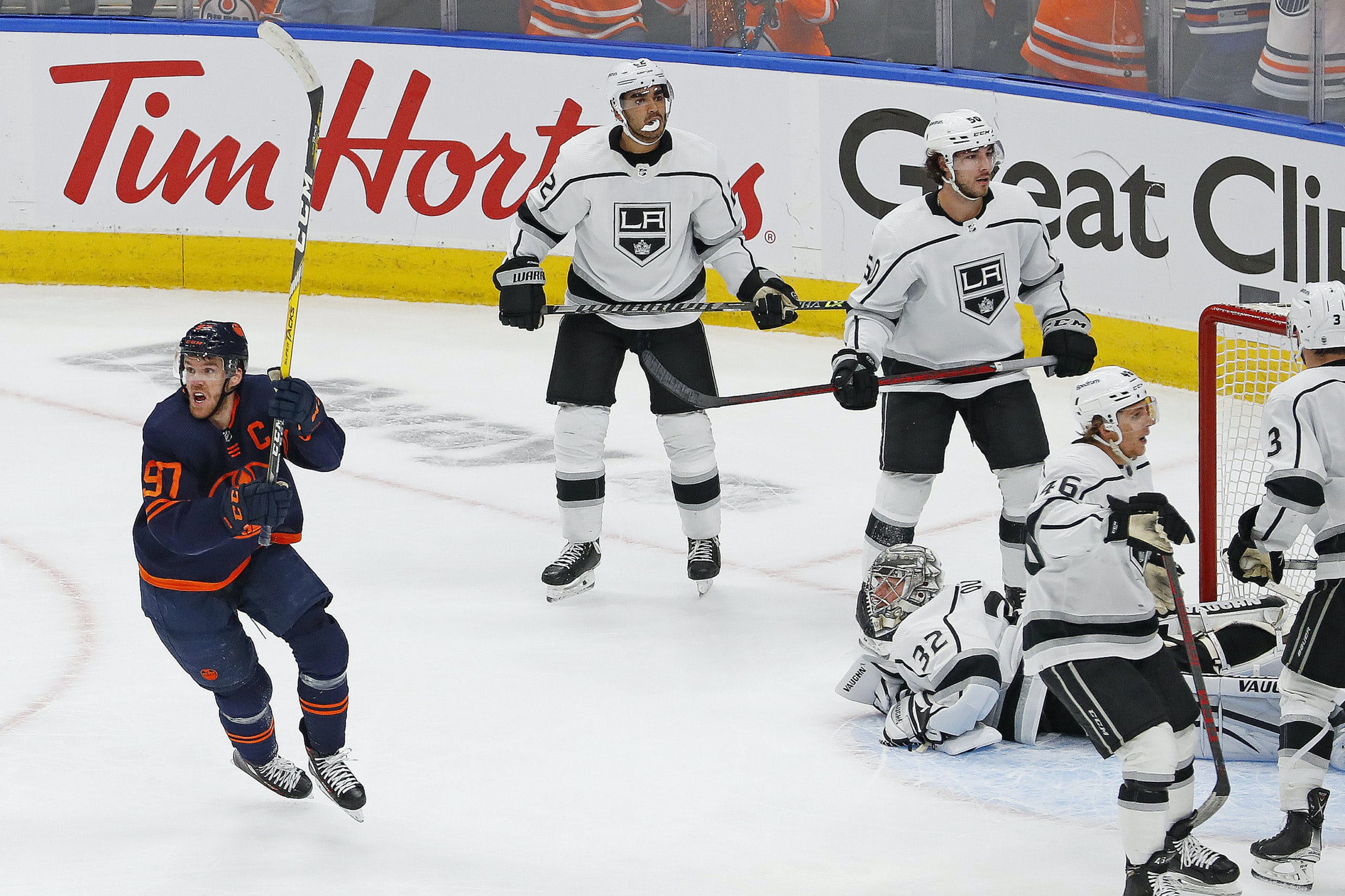 By Robin Brownlee
8 months ago
Connor McDavid reiterated yet again that he’s the best player on the planet and wound up Edmonton Oilers fans chanted “MVP-MVP-MVP” in the bedlam at Rogers Place last night, but the story that matters around here is a 2-0 win that puts the Oilers in the second round of the playoffs for the first time since 2017.
On a night when fellow Hart Memorial Trophy candidate Auston Matthews and the Toronto Maple Leafs were one-and-done again after a loss to the Tampa Bay Lightning, McDavid essentially threw his teammates on his back. He assisted on the 1-0 goal by Cody Ceci and scored the 2-0 goal himself with his sixth multiple-point outing in seven games. From the moment he ran over Sean Durzi on his first shift, McDavid was an irresistible force.
There might be some numbers that show McDavid has been better somewhere along the way, but he was magnificent in every way when it mattered most last night. McDavid wasn’t willing to be denied in Game 6 in Los Angeles and it was more of the same last night in front of a 29-save performance by Mike Smith.
All told, McDavid finished with 4-10-14 in the series as the Oilers go to the second round for the first time since they beat the San Jose Sharks in six games and lost to the Anaheim Ducks in seven games in McDavid’s second season. The Oilers await the winner of tonight’s Game 7 between the Calgary Flames and Dallas Stars.
Whether it’s a return to the Battle of Alberta or an encore of a stretch that saw the Oilers face the Stars in six consecutive post-seasons, I can’t imagine McDavid will turn up his nose at either match-up. He’s already got a bunch of personal silverware – two Hart trophies and three Ted Lindsay Awards, among others. What McDavid does not have is a second-round series win.
“He’s the best player in the world,” Leon Draisaitl said. “I think he showed that in the last two games. It’s not skill, there’s lots of skill obviously with him, but it’s the will. You can see it in his eyes. You can feel it in every shift he’s out there. He’s determined and there’s just no way that he or us were going to be denied. He led the way, he was amazing. Great job by him.”

Feel free to disagree, as the majority of Kings fans obviously did, but I didn’t see anything wrong with Evander Kane having some fun by holding up seven fingers as he skated along the boards in Los Angeles after his empty net goal to make it 4-2 in Game 6. The expressions on faces in the first few rows were priceless.
As Kane explained, his gesture wasn’t about scoring his seventh goal of the playoffs or done in response to Adrian Kempe’s OT goal celebration in Game 5, it was about forcing a seventh game at home. “It means Game 7, baby,” Kane said. Does it even matter why? Nothing crude. Nothing obscene. Last I checked, the NHL is in the entertainment business.
With seven goals and nine points this post-season, Kane has been the same revelation he was during the regular season – a game-breaker and a difference-maker. Kane has provided a significant jolt to this line-up and the emotion he brings is one of the reasons why. I see his celebration as part of that.
I used to be an old-school killjoy on this kind of thing. You know, show up an opponent at your own risk, don’t do anything the other team can use as motivation etc. etc. Now, removed from the days of no cheering in the press box, where I spent half my adult life, I have no issue with the exuberance Kane showed. It’s a hockey game, not a library.

After finishing a distant second to McDavid in Hart Memorial Trophy voting in 2021, I won’t be surprised to see Matthews voted the 2022 winner – that’s the vibe I get from what PHWA members are saying and writing. Matthews, McDavid and Igor Shesterkin of the New York Rangers are the finalists.
McDavid became the second player ever to be voted the Hart winner unanimously – joining Wayne Gretzky – with 100 first-place votes for 1,000 points a year ago. Matthews was 400 points back at 600. While it’s tough to look past Matthews’ 60 goals and back-to-back Rocket Richard Trophy wins, McDavid showed again Thursday and last night he’s the best player in the game. If I still had a Hart vote, McDavid would get it.
McDavid also claimed his third Ted Lindsay Award, voted on by the players, in 2021. This year, McDavid, Matthews and Roman Josi of Nashville are finalists. Some fans place more value in the Lindsay. They prefer a vote by players to one by the media. In the last three years, the Hart and Lindsay were swept by McDavid, Draisaitl and Nikita Kucherov. In 2018, Taylor Hall won the Hart and McDavid took the Lindsay.