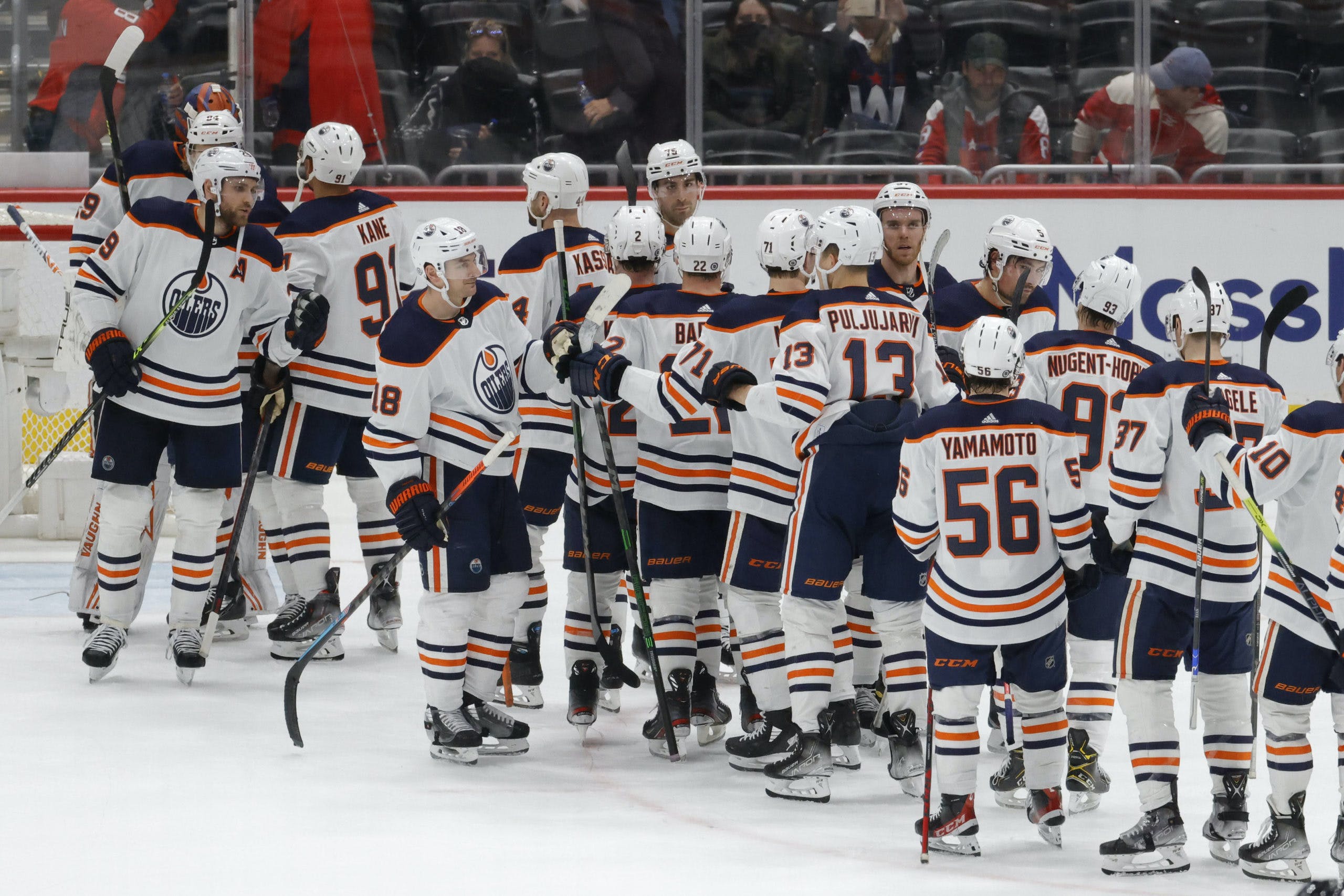 By Robin Brownlee
11 months ago
Maybe there’s a little recency bias at play here, but the 5-0-1 stretch the Edmonton Oilers put together going into the NHL all-star break has me feeling reasonably positive about how they’ll come out of it. They put a 23-16-3 (.583) record up against the Vegas Golden Knights Tuesday.
Coach Dave Tippett put it this way after beating the Washington Capitals 5-3 last Wednesday, and I can’t say I disagree. “We feel like we’re heading in the right direction. Take a little rest now, and our schedule gets hectic in February here. We’ll need everybody to make sure we’re ready. It’s only half the season, but it feels like the stretch run already. That’s what we’re going to gear up for.”
The right direction? Yes. The last six games weren’t close to perfect, but there are no asterisks in the win column for style over substance. Those two lengthy losing streaks, one of six games and another of seven, are in the rear-view mirror. Keeping them there is the trick as the Oilers get re-started with games in hand over six of the eight teams ahead of them in the Western Conference.
We know what we’ll get from all-stars @Connor McDavid and @Leon Draisaitl, even if they haven’t been romping as much lately as they often do. I like what I’ve seen from Evander Kane in the three games he’s played. I also like the look of @Ryan Nugent-Hopkins as the 3C alongside Zack Hyman. If Tippett can get a little more juice out of @Kailer Yamamoto and @Jesse Puljujarvi on the right side, the top six is set. I’d like to see the same from @Warren Foegele.
We’re told to expect @Mike Smith back between the pipes when the puck drops. If he can stay healthy long enough to replicate the kind of stretches he’s put together before, the Oilers will be right in the middle of the playoff mix in a hurry. That doesn’t mean Smith is any kind of answer beyond this season, but at his best for the balance of this schedule, he’s good enough to get it done.
If Smith can’t stay healthy, then GM Ken Holland has to get something done by the March 21 trade deadline. I don’t see the Oilers making the playoffs with Smith on the shelf and Koskinen in the crease. Miss the post-season, then the spit hits the fan and this whole thing gets torn down to the studs pronto, but that’s not happening, right? Right?

Chicago Blackhawks chairman Rocky Wirtz showed there is still plenty of work to do to drag his team into 2022 in terms of attitude and accountability in the wake of the Kyle Beach sexual assault scandal. Wirtz lost his temper this week when a reporter asked him a question. From the Chicago Sun-Times:
Rocky Wirtz dropped a nuclear bomb on the concept of accountability Wednesday. And just like that, he decimated any semblance of goodwill, forgiveness and positive change the Blackhawks might’ve built up in the months since Kyle Beach’s sexual assault allegations arose.
Asked by a reporter about the Hawks’ work to ensure another assault will never occur — part of a heavily scripted, so-called “townhall meeting” — the Hawks chairman delivered arguably the most unprofessional and shameful outburst ever heard within the walls of the United Center.
“We’re not going to talk about Kyle Beach,” Wirtz said with fury. “We’re not going to talk about anything that happened. We’re moving on. What we’re going to do today is our business. I don’t think it’s any of your business. You don’t work for the company. If somebody in the company asks that question, we’ll answer it.”
While Wirtz later apologized for his outburst in a prepared statement, that kind of blast with the Blackhawks trying to convince fans and the rest of the NHL they are committed to “doing things the right way,” makes it a hard sell with the club facing more allegations.

Best wishes to U.S. Olympian Brianna Decker, knocked out of the 2022 Beijing Olympics with a leg injury in Thursday’s 5-2 win over Finland. That’s brutal bad luck for Decker, an unbelievably great skater who was competing in her third Olympics trying to help the U.S. repeat as gold medalists.
Decker, 31, has ties to Edmonton. She played in the 2019 edition of the Hockey Helps the Homeless tournament here to benefit the Mustard Seed and Jasper Place and she also signed up for 2020, which was cancelled by COVID. Get well soon, Brianna.