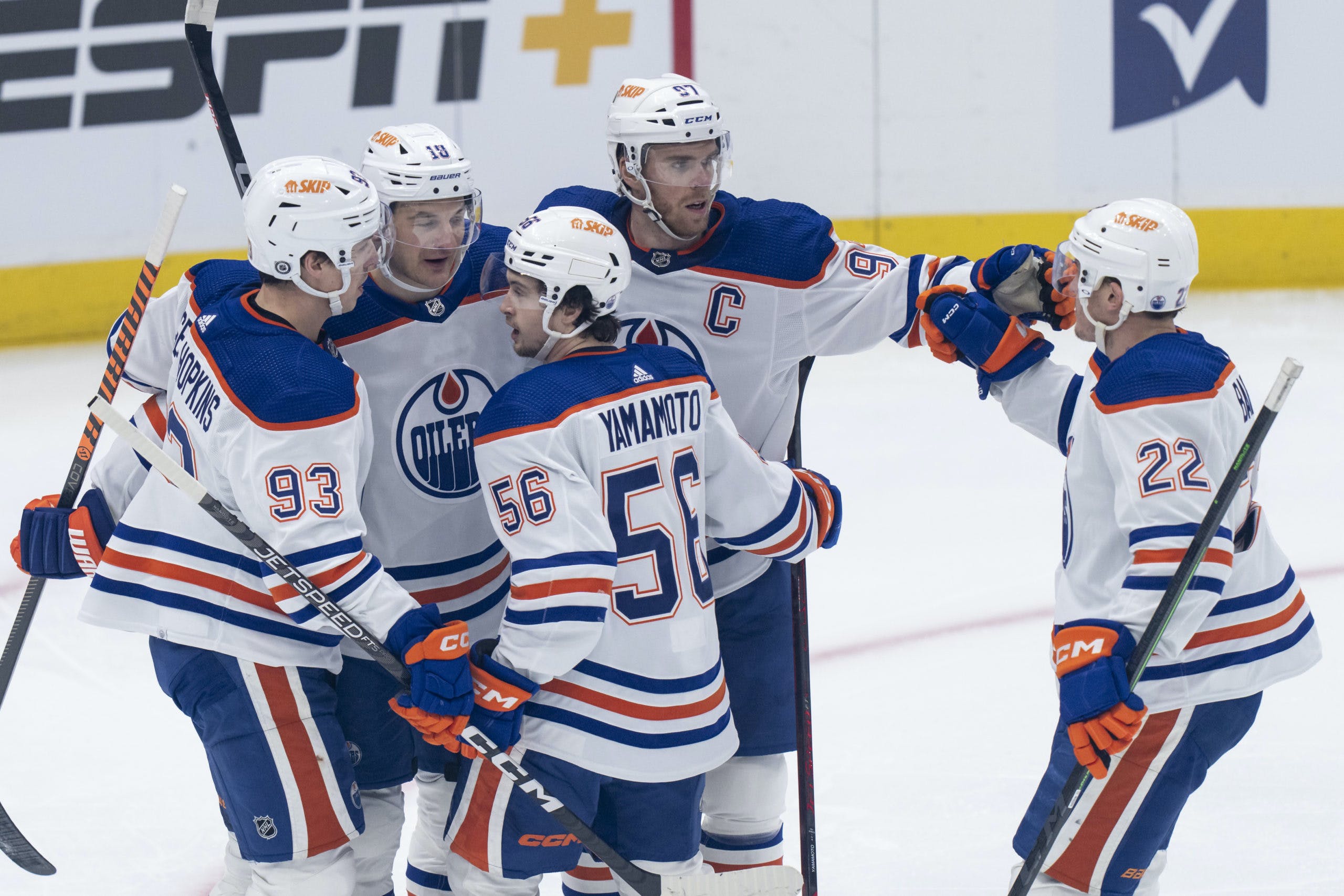 By Robin Brownlee
18 days ago
Count me among those who liked the odds of seeing the Edmonton Oilers and the Colorado Avalanche back in the Western Conference final in an encore of the 2022 series the Avs swept 4-0 last spring on the way to sipping suds from the Stanley Cup. Sure. That’s looking like something of a long shot right now.
In the first meeting of the teams since June, Colorado, laid low by injuries, arrived at Rogers Place last night having lost five straight games. The Oilers, meanwhile, just ended a five-game losing skid at home in a 4-2 win over the New York Islanders Thursday. The Avs, a 119-point team last season, are below the playoff cutline in the Western Conference. The Oilers arrived at the halfway point of the schedule last night clinging to a playoff spot.
The way things have unfolded, this game wasn’t standard storyline stuff — the Oilers looking for payback, the Avs flexing, looking to prove nothing has changed since last spring. For both teams, this was about gaining some traction and putting up-and-down seasons in the rear-view mirror. Nobody, not even the Cup champs, makes the playoffs based on reputation, on what they did last season.
Framed that way, the Avalanche got what they came for as they won it 3-2 on Cale Makar’s overtime goal after the Oilers coughed up a 2-0 lead — built on a pair of power-play goals from Zach Hyman — in the third period. While one win doesn’t constitute a turnaround, Colorado was the better team by a lot, especially five-on-five. If it wasn’t for Stuart Skinner making 43 saves for the Oilers, this would have been a laugher.
Having put together back-to-back wins just twice in the last month, the Oilers remain in the playoff mix for now with the loser point, but there’s much work to do. They’re 1-5-1 in their last seven games at home and have blown two-goal leads four times in that stretch. Four! Halfway home, they’re 21-17-3 for 45 points after 41 games. They look like a team in desperate need of a move or two by GM Ken Holland.
The Oilers and Avalanche meet twice more, with both games in Denver. The next game is Feb. 19 and the final meeting is the Oilers second-last game of the season, April 11. 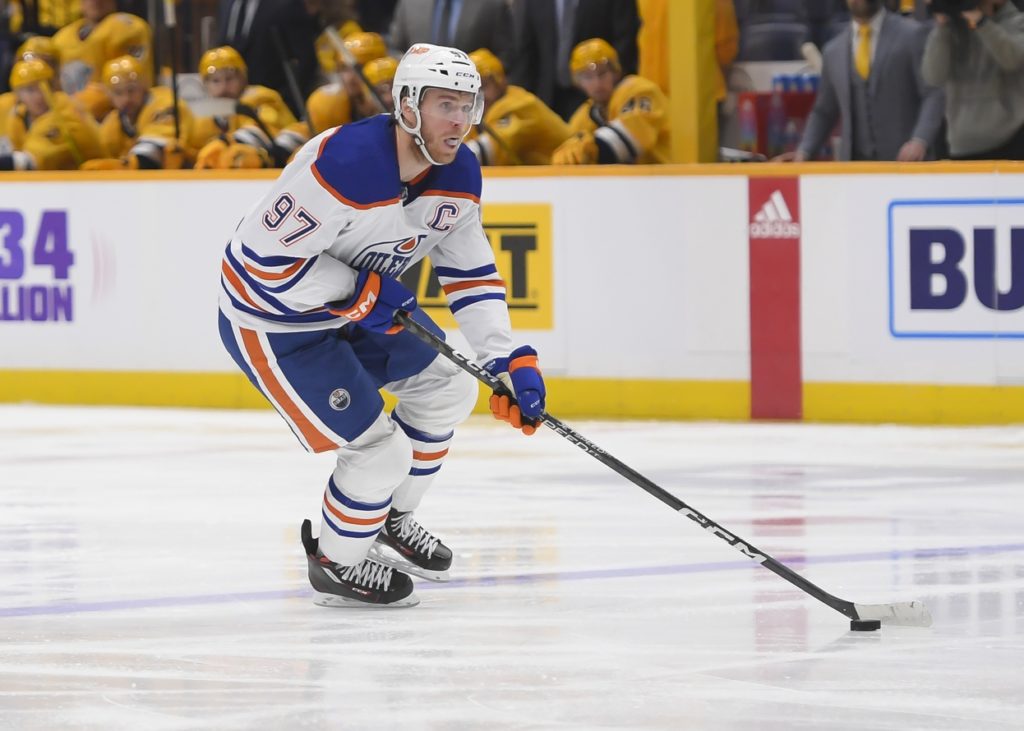 Dec 13, 2022; Nashville, Tennessee, USA; Edmonton Oilers center Connor McDavid (97) skates against the Nashville Predators during the second period at Bridgestone Arena. Mandatory Credit: Steve Roberts-USA TODAY Sports
The 500-assist milestone Connor McDavid reached Thursday in the win over the Islanders (Leon Draisaitl reached 400 assists in the same game) is more remarkable than it seems at first glance when you put it into context.
McDavid is now fourth in franchise record books behind only the HHOF trio of Wayne Gretzky, who had 1,086 assists in 696 games, Mark Messier, with 642 in 851 games, and Jari Kurri with 569 in 754 games. McDavid reached 500 with helpers on Draisaitl’s 1-0 goal and Kailer Yamamoto’s 2-0 goal in his 527th game.
Gretzky, Messier and Kurri put up their numbers during an era when the Oilers scored 400-or-more goals in five consecutive seasons – 1981-82 to 1985-86 – with 417, 424, 446, 401 and 426 in that span. Since McDavid, named an all-star for the sixth time on Thursday, made his NHL debut in the 2015-16 campaign, the team high for goals is 290 (in 2021-22).
In terms of assists per game with the Oilers, Gretzky leads at 1.56, while McDavid’s .95 has him second overall ahead of Messier and Kurri, both at .75. 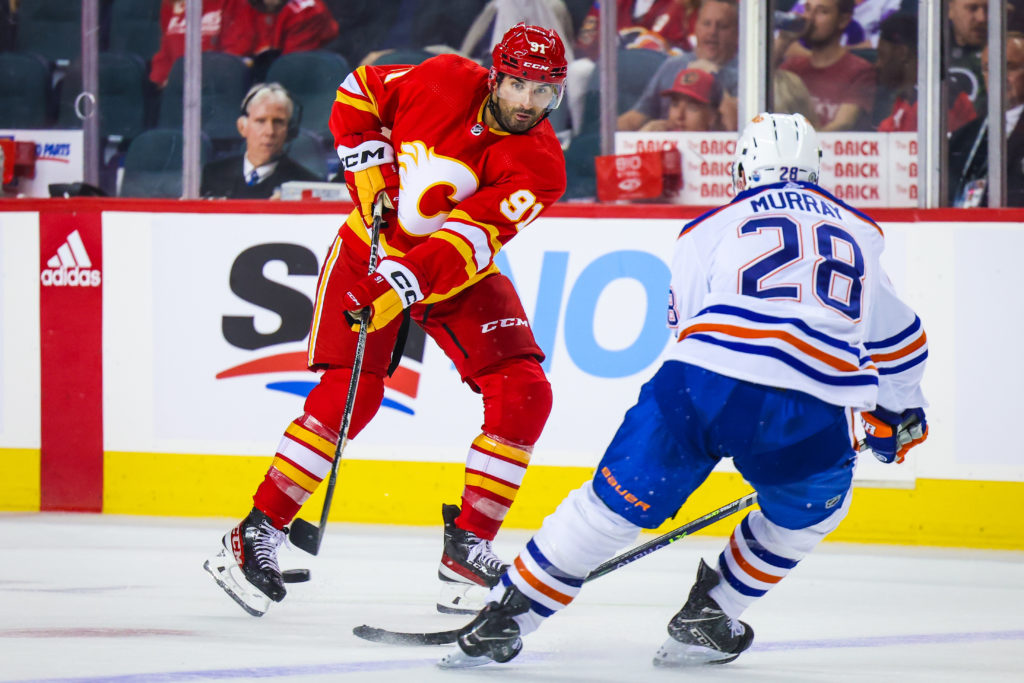 Sep 28, 2022; Calgary, Alberta, CAN; Calgary Flames center Nazem Kadri (91) passes the puck against the Edmonton Oilers during the third period at Scotiabank Saddledome. Mandatory Credit: Sergei Belski-USA TODAY Sports
It’s understandable that some fans have been beefing about the $9.25 million AAV Darnell Nurse is carrying on the eight-year $74 million contract he signed with the Oilers in August 2021. I get it. That’s a big number and critics say Nurse, 27, is neither a pure shutdown guy nor a rearguard who produces elite offensive numbers. Nurse is what some call a tweener. Many are of the opinion he’s just not a true No. 1. Fair comment.
That said, I’ve been eyeballing the eight-year, $84-million deal with a $10.5-million AAV Jonathan Huberdeau signed with the Calgary Flames last August. Huberdeau, 29, inked the pact after a career-high 115-point season with Florida. His previous best was 92 points. His next best is 78 points. As of Saturday, with the new contract not even kicking in until 2023-24, he has 26 points in 37 games. Huberdeau’s deal is the epitome of buying high.
Likewise, Nazem Kadri, who cashed in with a seven-year deal worth $49 million in Calgary. Kadri is 32, so the new pact, signed after a career-high 87 points with Colorado (his best previous total was 61 points with Toronto in 2016-17), takes him to age 39. Let’s see what that $7-million AAV looks like three seasons from now.

Several people have made this point since the first names for the 2023 NHL all-star game were announced and I’d like to add my voice to what sounds like a growing chorus.
I’m admittedly not a big fan of the game and I haven’t been for many years, but if the league insists on holding it as a favor for sponsors, enough already with the participation-type practice of having one representative from every team.
Under this format, McDavid has been named to the game, but not Draisaitl. He’ll have to get in via a fan vote — as will several other players from different teams. If the NHL insists on staging this event, pick the best players. If that means some teams have three or four players chosen and others have none, so be it.