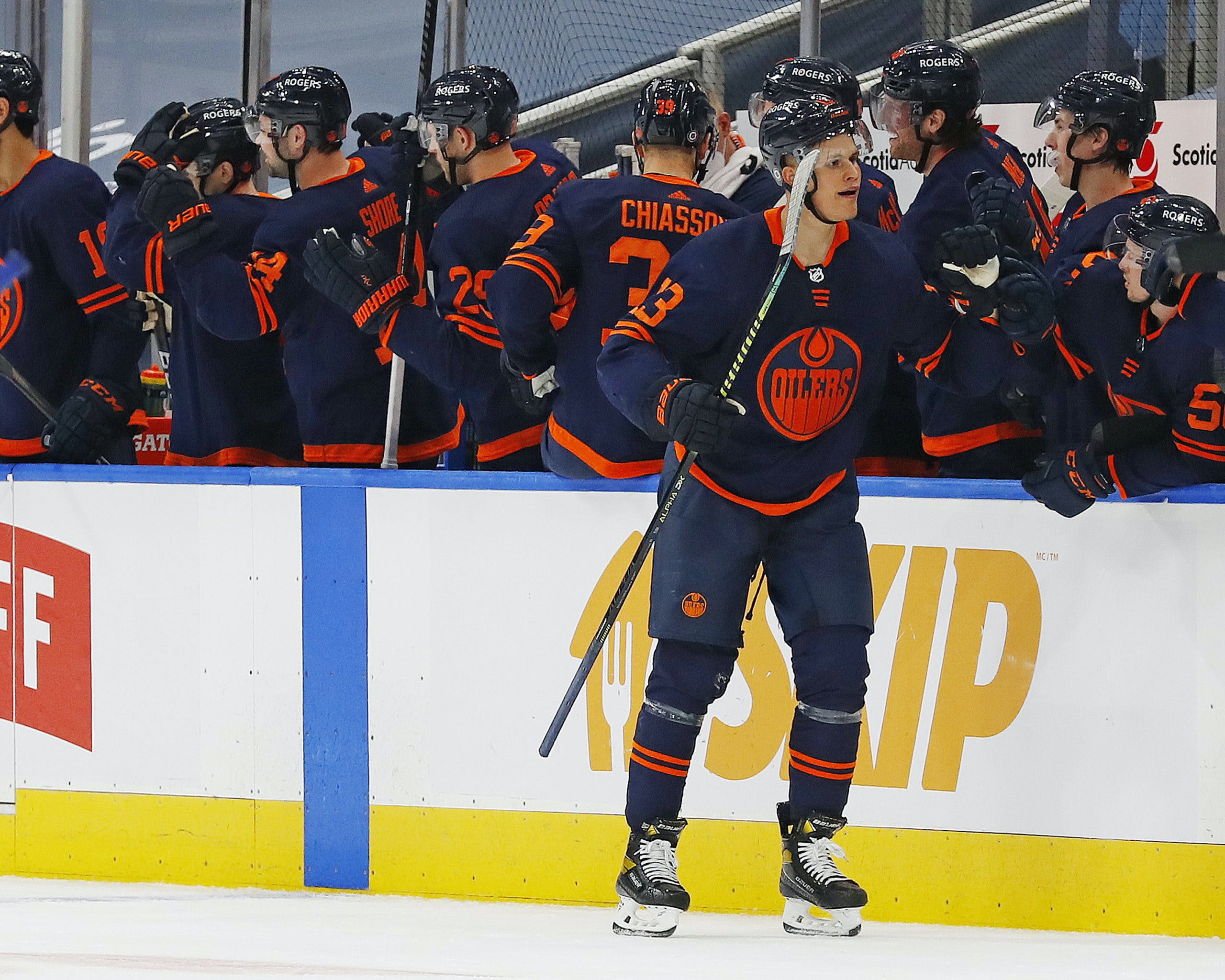 By Robin Brownlee
1 year ago
When a young player struggles to establish himself with the team that drafts him the way Jesse Puljujarvi did in his first stint with the Edmonton Oilers, getting a fresh start often means moving to another team. Not for Puljujarvi – his second coming is unfolding wonderfully before our eyes in the same place where he looked destined to fail not so long ago.
Sure, GM Ken Holland and coach Dave Tippett had a big hand in this. They made a second chance possible by patiently sorting out the mess created on the watch of Peter Chiarelli and coaches Todd McLellan and Ken Hitchcock. Most of the credit, though, goes to Puljujarvi, who has been a terrific story since he returned from Karpat. He’s grown up, had hip surgery and he’s building on the confidence and success he found back home.
At 23, it’s no longer a question of whether Puljujarvi will be an NHL player. The question now, as Puljujarvi goes into a season where he’ll play first line with Leon Draisaitl or Zach Hyman and Connor McDavid, is how good he might become. We’ve asked that a time or two lately – a nice change from yet another item about what a bust the lanky winger might be.
“He was a young kid, thrown into the fire and didn’t really know what he was doing out there,” McDavid told Mark Spector of Sportsnet this week. “Good for him for taking some time and trying to figure out the game. You can just see his confidence rising each and every day.”
It might have been tempting for Holland to jettison Puljujarvi after he declared he no longer wanted to play here, packed his bags and headed for home. Mind you, the vast majority of offers that come in a situation like that are sucker deals you never win. I wonder how many offers of help that fall into that category Holland got? In any case, that’s a moot point now.
“His attitude has allowed him to make it work,” said Ryan Nugent-Hopkins. “He stayed positive. As tough as it is on a young player coming in, maybe even more so on a European player, it’s not easy to crack the NHL right away. There were frustrations. We weren’t a great team when he came in. He had to learn to take strides.”
With pre-season over, the puck drops with points on the line against the Vancouver Canucks Wednesday at Rogers Place. Like many of you, I’m looking forward to watching the 2021-22 version of Puljujarvi and I’m eager to see how much more he’s got. 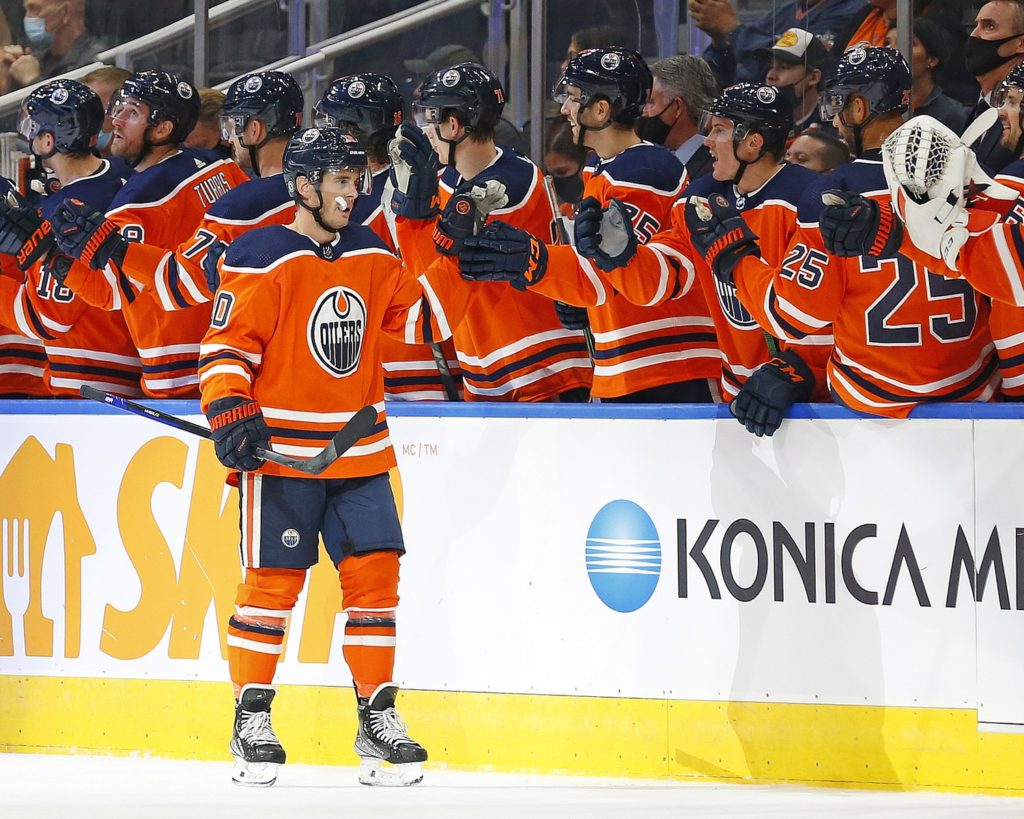 Oct 7, 2021; Edmonton, Alberta, CAN; Edmonton Oilers forward Derek Ryan (10) celebrates a second period against the Vancouver Canucks at Rogers Place. Mandatory Credit: Perry Nelson-USA TODAY Sports
Derek Ryan’s 3-2 goal and game-winner against the Canucks on Thursday was a thumbnail of exactly the kind of game the Oilers need from their third line this season, and something they didn’t get often enough from the bottom six last season.
Ryan, 34, the former U of A Golden Bear who spent his last three seasons with the Calgary Flames, tipped a Duncan Keith slapper past Jaroslav Halak with Zack Kassian raising hell in front. Ryan, Kassian and Warren Foegele, who assisted on the goal, look like they can provide the performance bump Tippett wants.
After wrapping up pre-season with a 3-2 win in Vancouver last night, there’s decisions to be made about the final couple of spots if the Oilers keep 14 forwards, but it looks to me like Foegele, Ryan and Kassian have the inside track as far as the third line goes.
“I thought we took some major strides as a line,” Ryan said. “We started making some plays in the O-zone. Obviously getting that goal is huge for the confidence, and I thought we were useful in all situations . . . I really like my line. I think we can be really effective and continue to stick with it, grow our game, and get confidence and chemistry playing with each other.”
Kassian, injured late when he hit his head on the ice during a scrap with Travis MacEwen, was as engaged as he’s been in a long time. Foegele continues to impress. Ryan has looked at home playing between them and he’s caught Tippett’s eye.
“He’s smart. He’s really smart,” Tippett said of Ryan. “He just reads plays. When you have a couple of big guys like (Kassian and Foegele) you really want to forecheck hard, he’s a guy that reads off those guys well. He’s been pretty solid. You can tell he’s a smart player. He just does a lot of little things right.”
We await Kassian’s status for Wednesday. 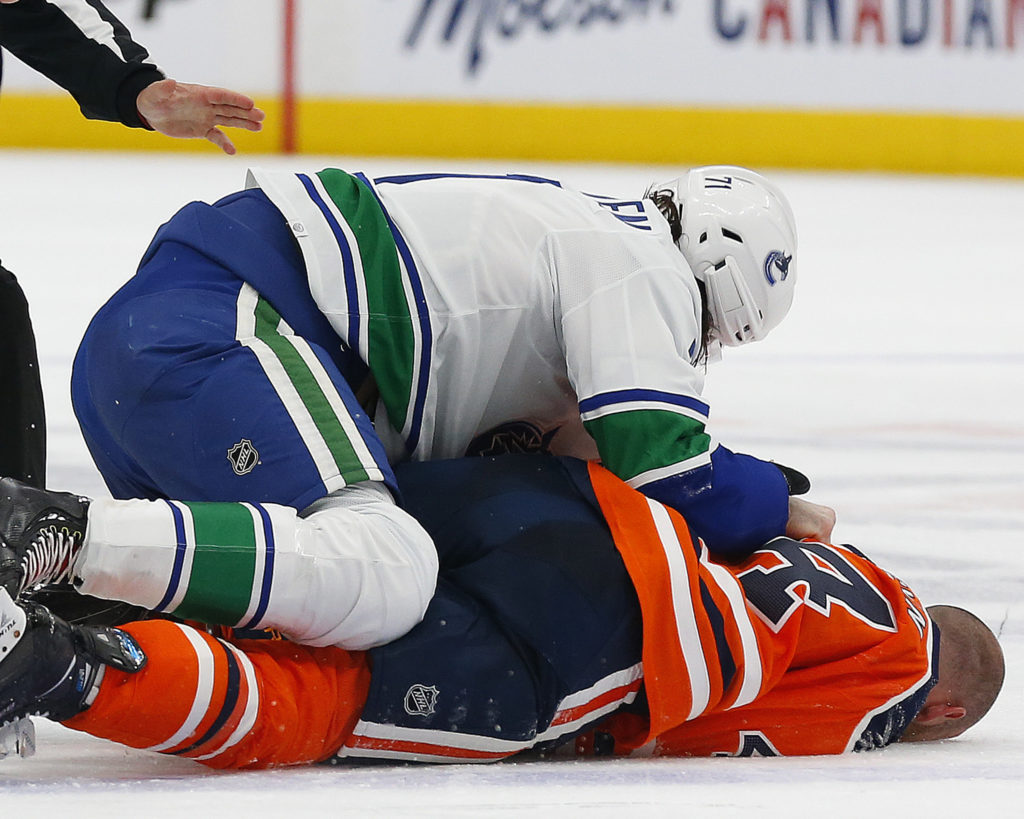 Oct 7, 2021; Edmonton, Alberta, CAN; Edmonton Oilers forward Zack Kassian (44) is injured during a fight with Vancouver Canucks forward Zack MacEwen (71) during the first period at Rogers Place. Mandatory Credit: Perry Nelson-USA TODAY Sports
Seeing Kassian motionless after he hit his head on the ice in his scrap with MacEwen was brutal, but it’s a scene we’ve witnessed (and one I was involved in as a lacrosse player) too many times. Short of banning fighting, I’m not sure there’s a reasonable way to avoid the potential for what we saw Thursday.
There’s no question MacEwen pulled off Kassian’s lid when he grabbed the ear-ring of his helmet as they engaged, but it didn’t look intentional to me. You can make a rule that players must immediately disengage during the heat of battle if a helmet comes off, but is that reasonable? I don’t think so.
Years ago, the NHL brought in a rule that players could not take their helmets off before a fight – a macho ritual that was commonplace. Players found a way around that and you ended up with situations like this. Former Oiler Georges Laraque often tried to remove the helmets of opponents before fights to save his hands. That didn’t always end well. During a fight with Chris Simon, Simon’s helmet came off and he was injured when Laraque knocked him down and fell on him. There was no intent, but it can be dangerous.
Nothing good happens when the lid comes off.