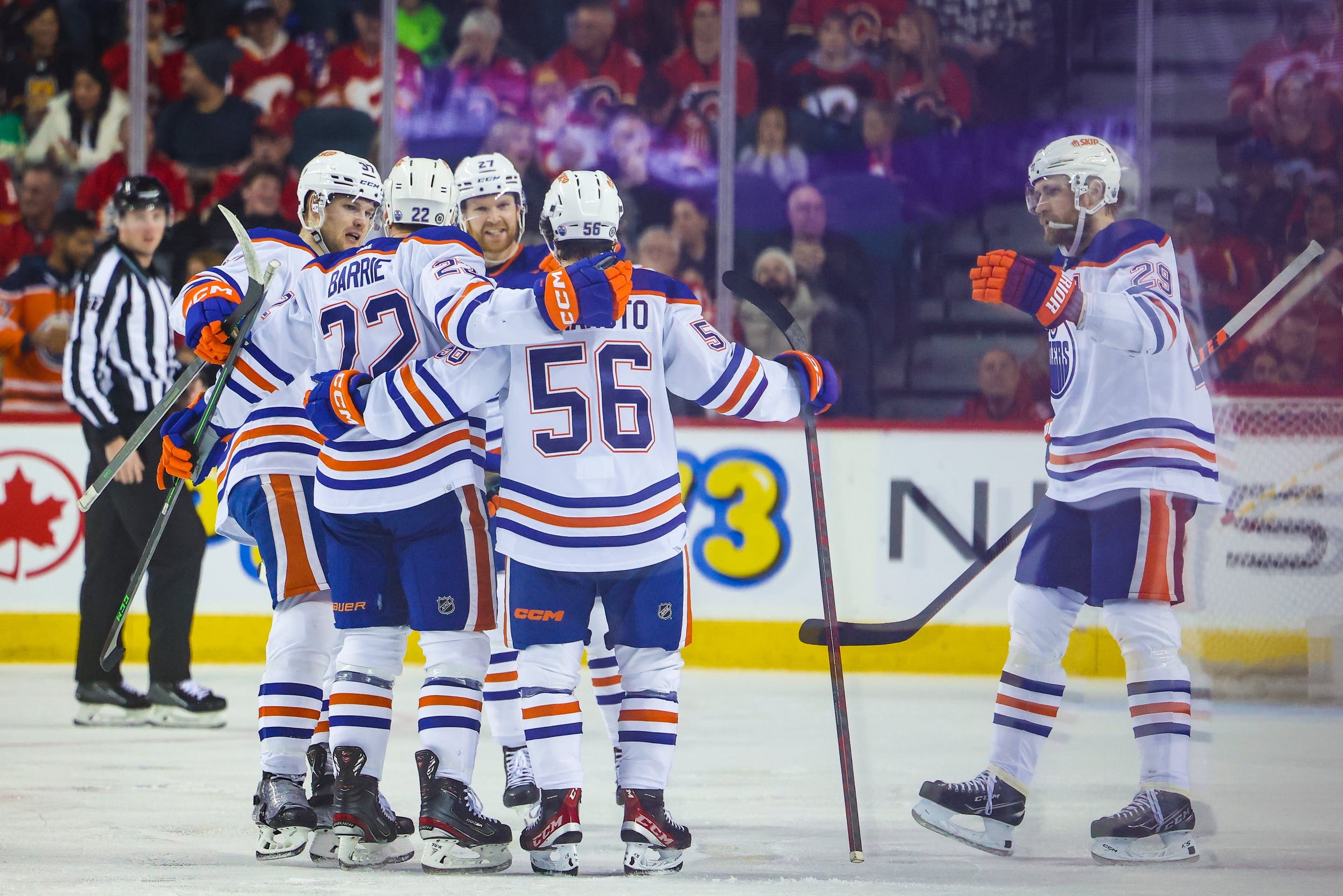 By Robin Brownlee
1 month ago
Reporters looking for tough talk about the need for retribution in response to a knee-on-knee hit by Mackenzie Weegar on Connor McDavid didn’t get it from Edmonton Oilers’ coach Jay Woodcroft Wednesday no matter how hard they tried. And try they did.
That’s understandable considering how important McDavid is to the Oilers. Nobody so much as looked at Weegar sideways for the hit in a game the Oilers beat the Calgary Flames 2-1 after McDavid picked himself up, dusted himself off and scored the winning goal on a power play in the third period. McDavid was feeling it again Friday with a five-point night (1-4-5) in a 7-2 waxing of Seattle.
A lot of Oilers fans expected Weegar would pay a price for taking McDavid down. They made their frustration that it didn’t play out that way known on call-in shows, fan websites, and social media in the aftermath. Fair comment.
Having played hockey and lacrosse in the 1970s, when a hit like Weegar dealt meant you’d be squaring off with a revved-up opponent hell-bent on retribution, I get the mindset of those who insist “something” had to happen. I’ve been in that camp a long time, even if now, on the first day of 2023, I’m not as convinced as I once was that the possibility of taking an ass-kicking is a significant deterrent.
In any case, Woodcroft didn’t deliver what the scrum was looking for no matter how many ways the question was framed. 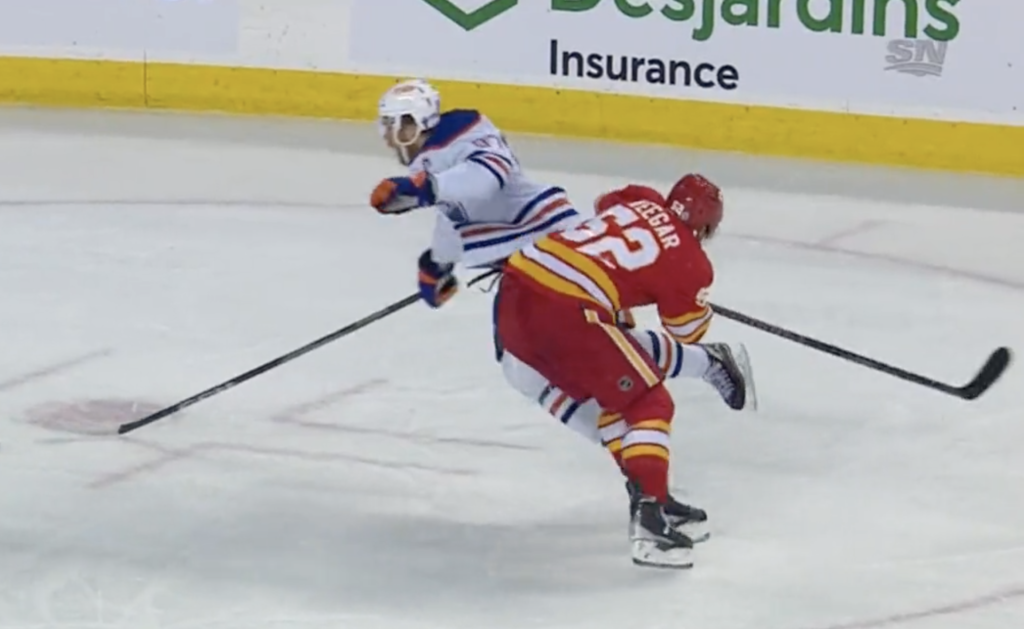 “I saw it live,” Woodcroft said. “I was close to our end there. I thought it was a penalty. Sometimes in the heat of the action, the referee makes a judgment call and didn’t think it was a penalty.
“When you re-watch it on video, I think you see, you know, somebody who made a cut-back move so quickly that the other player didn’t have the ability, like it was almost like he got in the way. I didn’t see intent on the Calgary player. It happened. I thought it was a penalty. It didn’t get called. You live with that stuff. Eventually, when the other team did take an undisciplined penalty in the third period, we made them pay with a power play, a form of our toughness.”
Ryan Rishaug of TSN followed up by asking Woodcroft is he was happy with the response, or lack of same, by his team. No cigar.
“As I said, I didn’t see intent from that player as that being a purposeful intent to injure somebody. I thought that play happened so quick that the player almost got in the way. It happened. I thought it was a penalty. I think in the end, as I said, when they took an undisciplined penalty, we made them pay with a form of our toughness and we walked out of Calgary with two points.”

True, but taking two points without robust pushback won’t satisfy everybody. Let’s be honest — there’s a degree of bloodlust involved in taking care of business the old-fashioned way, whether it’s about dropping the gloves or simply turning up the physical intensity.
I’m not sure the Oilers are built to play that game as the roster stands now. Outside of Darnell Nurse, who logs the most minutes on the team, Evander Kane, still weeks away from returning from wrist surgery, Klim Kostin and maybe Markus Niemelainen, who in this line-up packs much of a FAFO threat as part of their game?
My guess is GM Ken Holland is looking to change his roster to provide more toughness. If we can see a need, Holland damn sure can too. Oilers Now host Bob Stauffer, as connected as anybody, made mention of potential personnel moves again in the wake of the Weegar hit on McDavid. It sounds to me like Stauffer is telegraphing something as he is prone to do.
This from Stauffer: “It is my belief the Oilers will add at least one more defenceman and at least one forward by the (March 3) trade deadline. Minimum one forward, possibly two. They have to change the dynamic of what they have. As the season goes on, you simply need more physicality.”
No argument here. 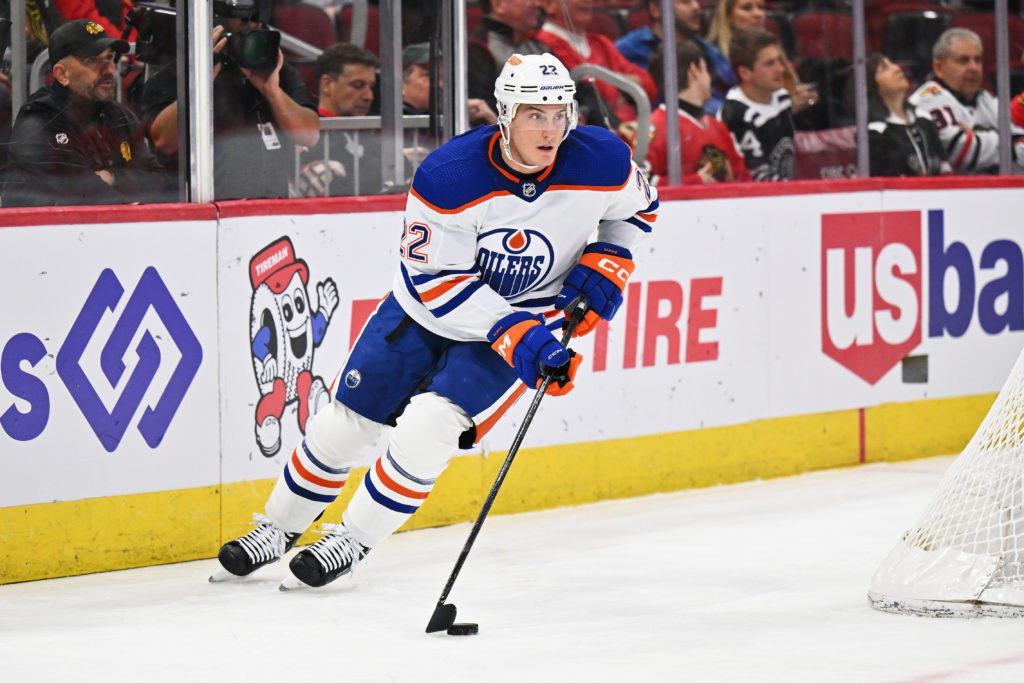 Nov 30, 2022; Chicago, Illinois, USA; Edmonton Oilers defenseman Tyson Barrie (22) skates against the Chicago Blackhawks at United Center. Mandatory Credit: Jamie Sabau-USA TODAY Sports
Seeing Tyson Barrie score his 100th NHL goal against the Flames reminded me again of how time flies. I was in Kamloops 1985-89 covering the Blazers of the WHL and Len Barrie, Tyson’s dad, was a pretty good player with the Victoria Cougars back then.
Actually, Len, drafted by the Oilers in the sixth round, 124th overall, in 1988 was more than pretty good. Traded to Kamloops for the 1989-90 season, Barrie tallied 85-100-185 in 70 games to lead the WHL in scoring ahead of the likes of Petr Nedved, Stu Barnes, Mike Sillinger, Travis Green and Ray Whitney. His point total is still sixth all-time for a single season in the WHL.
Before I left Kamloops for the Edmonton Journal in December 1989, I predicted Barrie would score 50 goals that season. Turned out I was low-balling him. I also wrote he’d be a sure-fire NHL player with a chance to be a star. Barrie wasn’t only talented, he played with some edge – in his final three WHL seasons he had penalty minute totals of 192, 157 and 108.
Barrie made it to the NHL and made stops with Philadelphia, Florida, Pittsburgh and Los Angeles – he never did sign or play with the Oilers — and got into 184 games, but didn’t’ manage to carve out a niche. Barrie finished with modest totals of 19-45-64. The numbers speak for themselves – Tyson has been a far better NHL player than the old man.
Editorials
Featured
Oilers Talk
Recent articles from Robin Brownlee