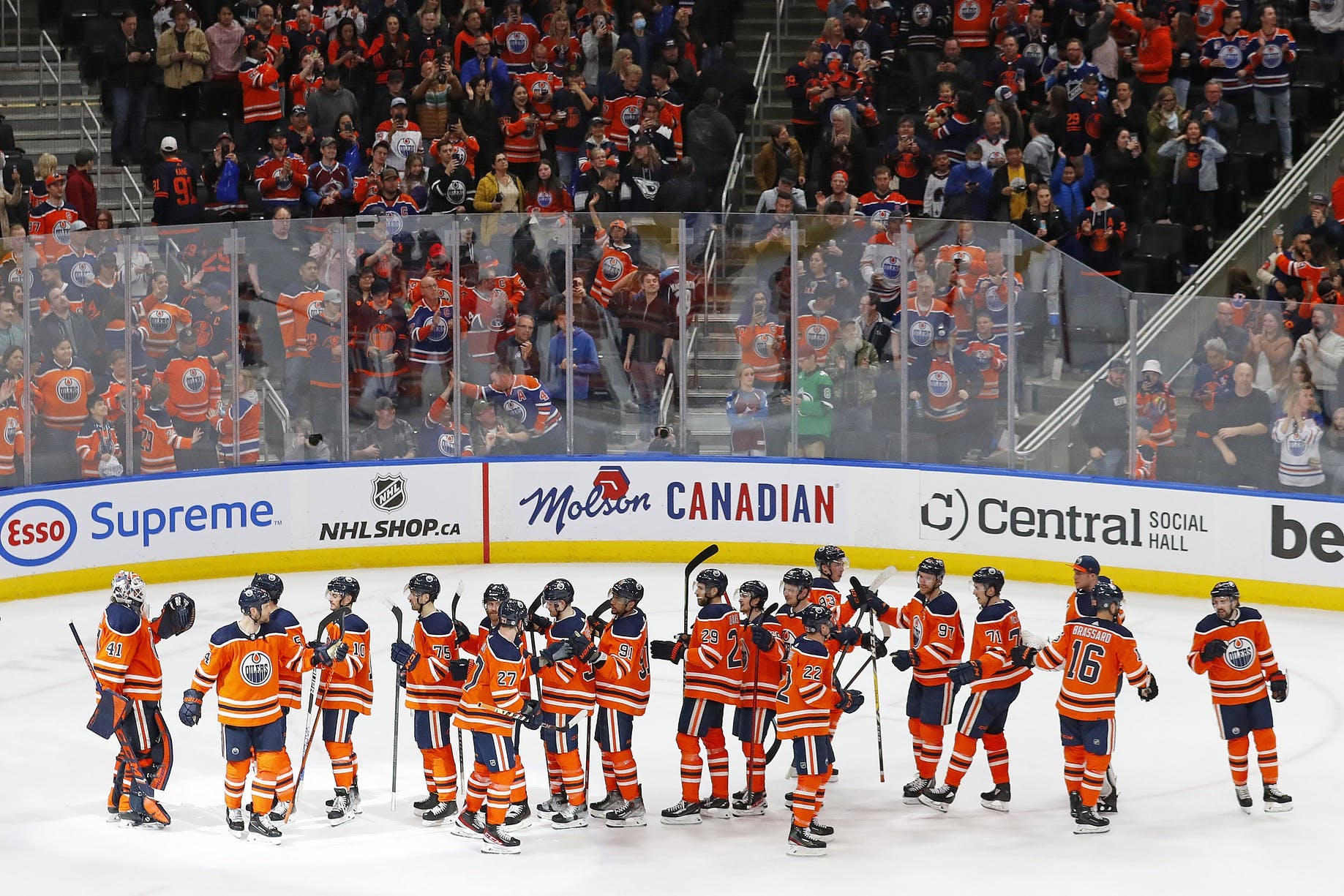 By Robin Brownlee
7 months ago
Given the choice of feeling sorry for himself when the chips are down or refusing to fold and kicking ass trying to do something about it, @Mike Smith has shown which way he’s going to go every time over the course of his NHL career. He’d rather battle, a word critics not so long ago rolled their eyes over — before they started calling him Smitty again.
What we saw Friday as the Edmonton Oilers beat the Colorado Avalanche 6-3 to clinch a Western Conference playoff berth and run coach Jay Woodcroft’s record to 23-8-3, is Smith has plenty of company these days. We’re seeing a resilience and quiet tenacity that wasn’t there before Woodcroft took the controls from Dave Tippett. This team battles. But they also play smart and with more composure. The mix is better. They have more dimensions. I’m not waiting for things to come off the rails. You?
Smith continued his I’m-not-done-MF stretch with 34 saves to improve to 10-0-1 over his last 11 starts. The penalty kill stayed stingy, in large part because of Smith, going six-for-six and giving the Avs’ talented forwards no sniff. Then, there was Evander Kane, who scored three goals and added an assist. He has 20 goals in 39 games and the group of fans demanding GM Ken Holland find a way to re-sign him grows by the day. Connor McDavid had three assists Friday. He leads the league with 116 points. Stunner.
Simply put, the pieces are coming together at the best possible time and in a way that didn’t happen under Tippett. Smith is healthy. Kane has been a game-changer. @Zach Hyman is enjoying his best NHL season. There’s been a little bit of Smitty in a lot of players while navigating the rough spots. Here they are in the post-season again. From where I sit, they look more ready for it. 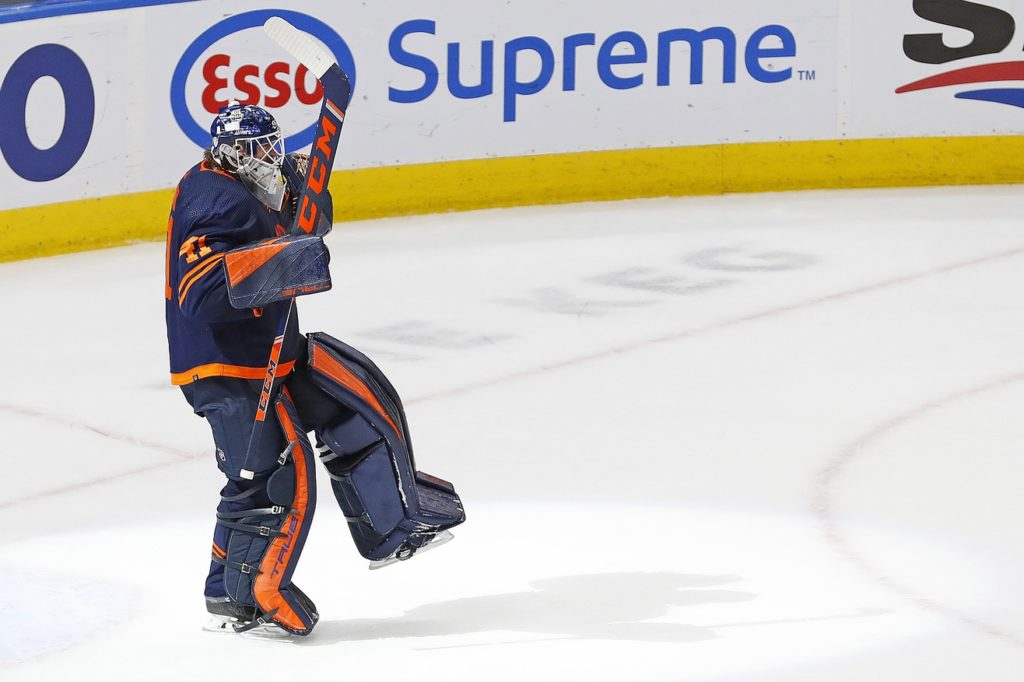 Apr 20, 2022; Edmonton, Alberta, CAN; Edmonton Oilers goaltender Mike Smith (41) celebrates a 5-2 win over the Dallas Stars at Rogers Place. Mandatory Credit: Perry Nelson-USA TODAY Sports
“We talked about adversity all the time,” Smith said in his post-game availability Friday. “There’s two ways to go about it. Feel sorry for yourself or grab it and do something about it. I really feel like going through the tough times this year, really made this team stick together and grow and understand what it takes to win tight hockey games.
“It’s hard to battle through those tough times and to do something with it and do something about it. It’s taught this group a valuable lesson and it’s a valuable one going into the most important time of the year. There’s going to be times in the playoffs where it isn’t going to go your way, but you just have to stick with it, stick together as a group and good things will happen.”
Through all the swings that inevitably come during the course of a season, Woodcroft has stressed staying in the moment – don’t look too far ahead or wasted time glancing back. It’s more of the same now. “I think we’re playing hard,” Woodcroft said post-game. “We’re playing hard, and we also got pushed by a good team today.
“They had chances, but I liked our resolve, and I liked our resiliency after finding ourselves down 1-0. I thought we got better as the game went on, and we’re getting more and more comfortable in those types of games which is a good sign.”
Yes, it is. They’re in. We’ll see soon enough where it goes.

From playing in America West Arena when they first moved to Arizona from Winnipeg to Glendale Arena (later Gila River Arena) before almost anything else was out there to this?
I’ve admired Gary Bettman for his dogged determination to give teams every chance to make a go of things where they are – Edmonton comes to mind – before pulling up stakes and moving on. That said, I’m wondering about his fixation with keeping the NHL in Arizona, given what’s planned for the new rink at ASU in Tempe as a stop-gap until a new arena is built.
America West Arena was downtown but was built for the NBA’s Phoenix Suns. In some end zone seats, you couldn’t see the last few feet of the ice surface. Glendale was a nice facility even before the hotels and nightspots sprung up, but it was forever and a day away from downtown and the fanbase. But just 5,000 seats at ASU with these prices? How is this going to fly?
“This is a good market,” Bettman said. “This has been a franchise that has had its challenges, some of which has been beyond its control, and as long as there’s commitment forthcoming for a new building, that it’s going to be worth sticking with it.”
I can’t think of another NHL rink during my lifetime with seating capacity this limited. The Stampede Corral, used by the Calgary Flames in their first three seasons until the Saddledome was built, comes to mind but at 7,500 it had almost 50 per cent more seating capacity than ASU.