By Robin Brownlee
11 months ago
Even though Ryan Smyth had talked privately about not being willing to take a hometown discount to stay with the Edmonton Oilers in the days leading up to the 2007 NHL trade deadline, I didn’t see the events that unfolded 15 years ago today coming.
Smyth’s agent, Don Meehan, and Oilers’ GM Kevin Lowe could posture all they wanted for public consumption over the dollars it would take to get a five-year contract completed, but in the end, getting the ink done was merely a formality, no? This, after all, was Ryan Smyth. No. 94. Captain Canada. Heart and Soul. Even as the days ticked past and I worked the phones on both sides of negotiations, I was sure of it.
Well, a funny thing happened on the way to a done deal. Despite Meehan and Lowe spending the final 24 hours leading up to the deadline pushing to get the ink done – they negotiated a no-trade clause along the way – they couldn’t make the dollars work on the average annual salary. According to Oilers’ sources at the time, the difference in AAV going into the final 24 hours was $750,000, not $100,000 per season, as was widely speculated.
Out of time and fearing he’d lose Smyth to free agency, Lowe traded him to the New York Islanders for Robert Nilsson, Ryan O’Marra and a first-round draft pick in 2007 that turned into Alex Plante. The rest we know – like anybody who was there or saw it unfold on TV doesn’t have it burned into their brain.
There was the sight of a stunned and emotional Smyth and his wife Stacey walking through EIA in a swarm of media to catch a flight to New York. There was Smyth’s tearful farewell to a shaken fanbase wondering what the hell they’d just witnessed. Dubya-tee-eff? As an aside, Feb. 27, 2007 was the day that led to the eventual creation of this website.

THE WAY IT WAS 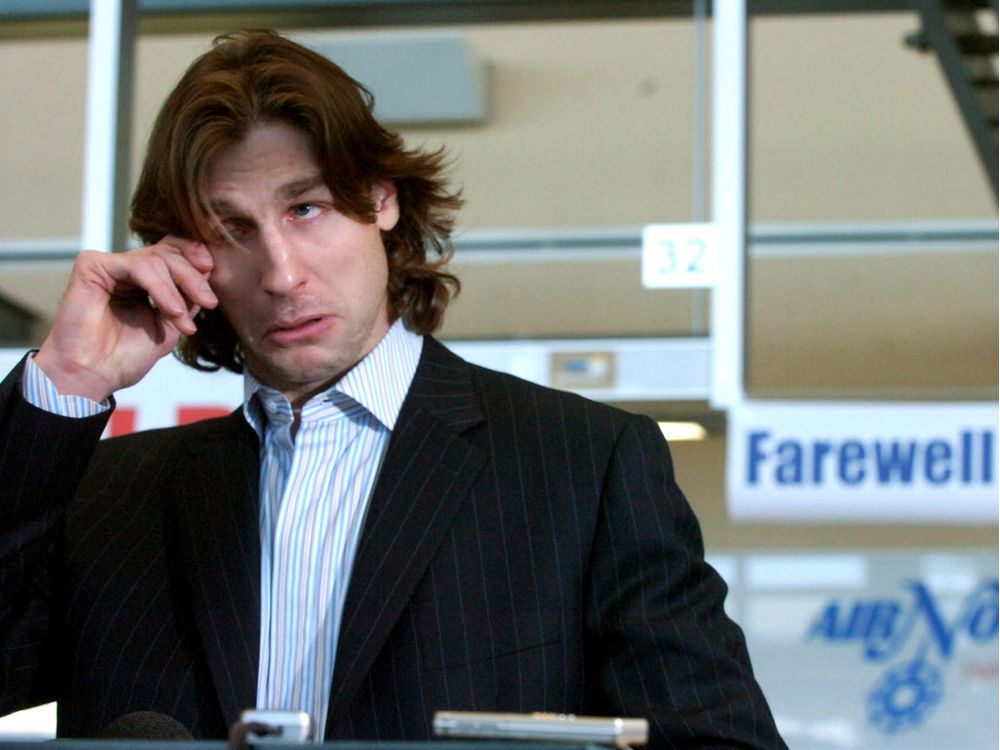 February 28, 2007. Former Edmonton Oilers Ryan Smyth cries as says his goodbyes during a press conference at the Edmonton International Airport departures level Wednesday February 28, 2007. He was traded to the New York Islanders at the deadline of the NHL trade deadline. Edmonton Sun/QMI Agency
As if Smyth didn’t shed enough tears at the airport before flying east, a trade that turned the fanbase upside down came on the same day the Oilers raised Mark Messier’s No. 11 jersey to the rafters at Rexall Place before a 3-0 loss to the Phoenix Coyotes, coached at the time by Wayne Gretzky. That, in itself, was an emotional event.
One of the things that sticks with me is what Lowe said in the aftermath of a trade I honestly don’t think he expected to make when the day began. “We’re not a better team today with Ryan gone, no question,” understated Lowe. “In the very near future, we’ll be a better team. I really felt all along the deal would get done . . . it was really down to the 11th hour when we realized, financially, it wasn’t going to get done.”
When talks with Meehan ended without a handshake and the trade with the Islanders was completed, Lowe picked up the phone and delivered the news to Smyth. “I know it’s the most difficult phone call I’ve ever had to make,” he said. “I used to think there weren’t many people that cared more for the game than me. I know one, for sure, that does.”
With the Oilers quickly headed in the opposite direction of the Cinderella team that lost to the Carolina Hurricanes in Game 7 of the 2006 Stanley Cup final, the suggestion by Lowe that the Oilers would be a better team in the very near future was a hopeful reach at best. Starting with the loss to Phoenix the night of the trade, the Oilers lost 11 straight games (10-0-1). They went from 30-27-6 to also-rans at 30-37-7 in that stretch.
As for the near future Lowe talked about, the Oilers missed the playoffs for 10 straight seasons. The Decade of Darkness lasted from the season Smyth was sent packing, through his return via trade with Los Angeles in June 2011 until after his retirement in April 2014. It’s almost like the hockey gods decided this franchise needed a kick in the pills for sending away the Alberta boy who’d willed himself into the NHL with blood and sweat, but that was a case of bad management and coaching, not divine intervention.

On the day 15 years ago when Smyth was traded and Messier had his jersey retired, it might be Gretzky, who experienced both right here in Edmonton, who summed it up best.
“You can’t put your heart before the team,” he said. “He (Smyth) is probably in a situation very similar to mine in that he truly enjoyed it here and developed a lot of friendships and relationships in the city. It’s more than just being a player on a hockey team. As you go down the road you come to understand the business side of our game. Sometimes it’s not pretty.”
Right you are, Gretz. All these years later – Smyth celebrated his 46th birthday a week ago – Feb. 27, 2007 remains one of those “not pretty” days I’ll never forget.