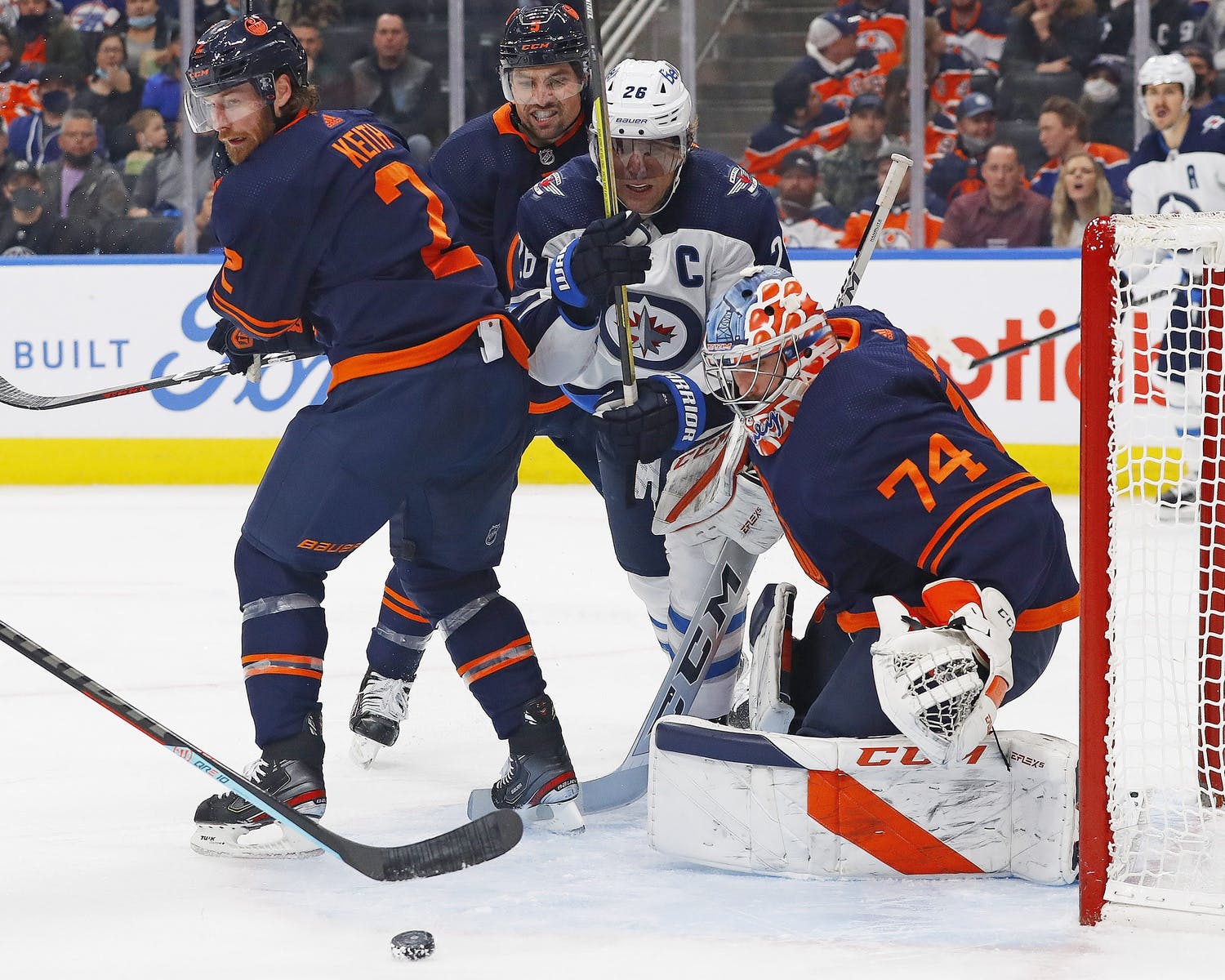 By Robin Brownlee
1 month ago
Stopping pucks obviously ranks higher in the job description than being besties when it comes to the tandem that’ll share the blue paint for the Edmonton Oilers this season. That said, it doesn’t hurt that Jack Campbell and Stuart Skinner hit it off before training camp even started.
Campbell, 30, who came over from the Toronto Maple Leafs after getting ink done on a five-year deal for $25 million, will be the go-guy in the crease. Skinner, the 23-year-old local boy who made a very good impression in 13 games behind Mike Smith and Mikko Koskinen last season, is pencilled in as Campbell’s back-up. Both have paid some dues to get to this point.
“He’s an awesome guy,” Skinner said of Campbell. “He’s very nice. He’s a very, very nice, genuine human being. We just get along really well. When he first signed, I gave him a text ‘congrats’ and he said, ‘Hey, I want to come in early just to meet you, go out for dinner and hang out.’
“I thought that was just so nice of him to do, so him and I got to know each other for the past couple weeks, and we’ve been having some fun. It’s been good.”
To look at them, Campbell and Skinner could be brothers. They aren’t, of course, but in terms of pushing each other to get the Oilers’ goaltending where it needs to be moving forward, they are brothers in arms. For Skinner, getting to the NHL is one thing, staying is another. Five years beyond his draft day, he’s played 14 games in two stints here.
“I’ve seen this young man mature,” said head coach Jay Woodcroft, who has history with Skinner in both Bakersfield and Edmonton. “I’ve seen him get engaged, I’ve seen him get married. He’s hit some different life stages along the way here. I see somebody who is confident, somebody who feels confident because he’s earned the right to feel confident. He’s put a lot of work in and it’s a credit to him.”
Skinner will get the start against the Winnipeg Jets this afternoon (4 p.m.) to open the Oilers pre-season schedule. 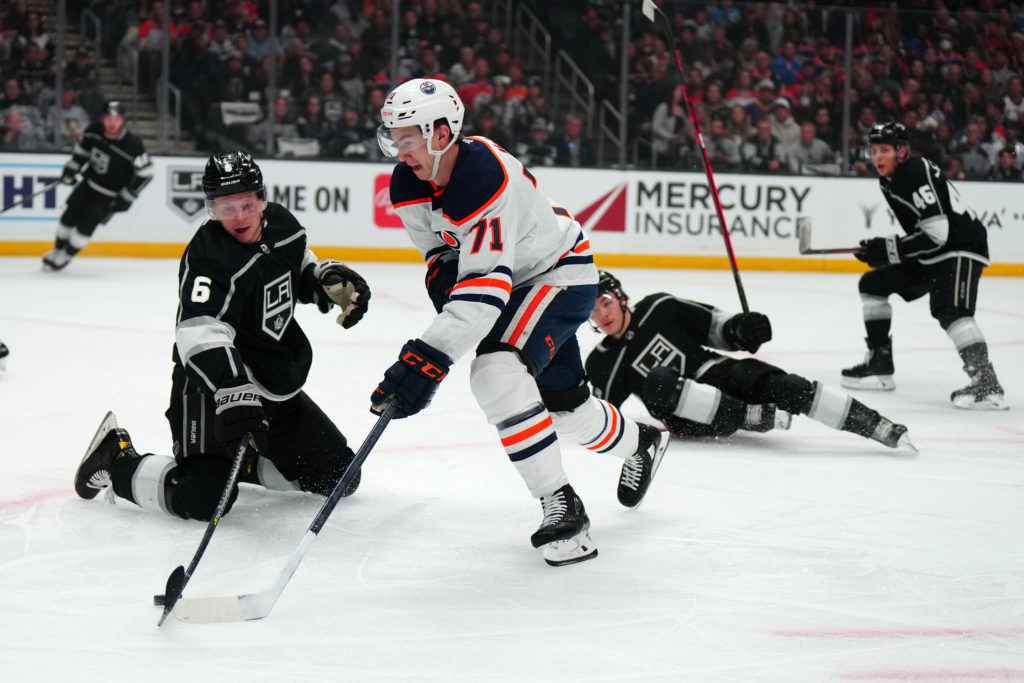 May 6, 2022; Los Angeles, California, USA; Edmonton Oilers center Ryan McLeod (71) skates past LA Kings defenseman Olli Maatta (6) in the first period of game three of the first round of the 2022 Stanley Cup Playoffs at Crypto.com Arena. Mandatory Credit: Kirby Lee-USA TODAY Sports
It goes without saying the one-year contract for $798,000 Ryan McLeod signed with the Oilers Thursday is a sweet discount deal for the team. It’s a case of McLeod winding up at the back of the contract line in the middle of a salary cap crunch, not a reflection of his value to the team.
McLeod, who turned 23 Wednesday, earned $834,167 last season with the Oilers — the new deal is less than his qualifying offer. He sits 12th in AAV for 2022-23 among team forwards. Of course, the money matters, but a solid season puts McLeod in a better position next summer when GM Ken Holland won’t be as cash-strapped.
“I think we have a good group here,” McLeod said. “I think we have a good chance to do something special here. I wanted to be a part of it. I don’t want to come back in a couple weeks later with, like, a bit more money. I just don’t think it’s really worth it. If we have a good year, everything is going to work out for a reason. I’m excited for this group. It should be a good year.”

In a move many observers would say is overdue, Oilers chairman Bob Nicholson, chief executive officer of Hockey Canada from June 1998 to June 2014, has been summoned to testify before The House of Commons heritage committee regarding the handling of sexual assault claims.
This will mark the third time HC executives have testified before the committee since news broke about of an alleged sexual assault involving players on Canada’s junior team in 2018 after a Hockey Canada gala in London, Ont., followed by a settlement between HC and the complainant. A second allegation against members of the 2003 junior team has surfaced since. Hearings resume Oct. 4.

A shout out to former Oilers draft pick and assistant coach Manny Viveiros, now the head coach of the Henderson Silver Knights of the AHL. Viveiros, 56, a native of St. Albert, is on leave while he recovers from surgery and treatment for prostate cancer after being diagnosed last October. It’s been a long, tough haul.
Viveiros talked to Jason Gregor Wednesday about what’s happening with him and the interview really is worth a listen.

I’d like to pass along my condolences to Vancouver Canucks vice-president Stan Smyl, his three children and the entire Smyl family on the passing of his wife of 42 years, Jennifer, last week.
As a teen I cheered for Smyl as a member of the powerhouse New Westminster Bruins from 1974-78 at Queen’s Park Arena and later dealt with him as an NHL writer during his long affiliation with the Canucks. God bless.