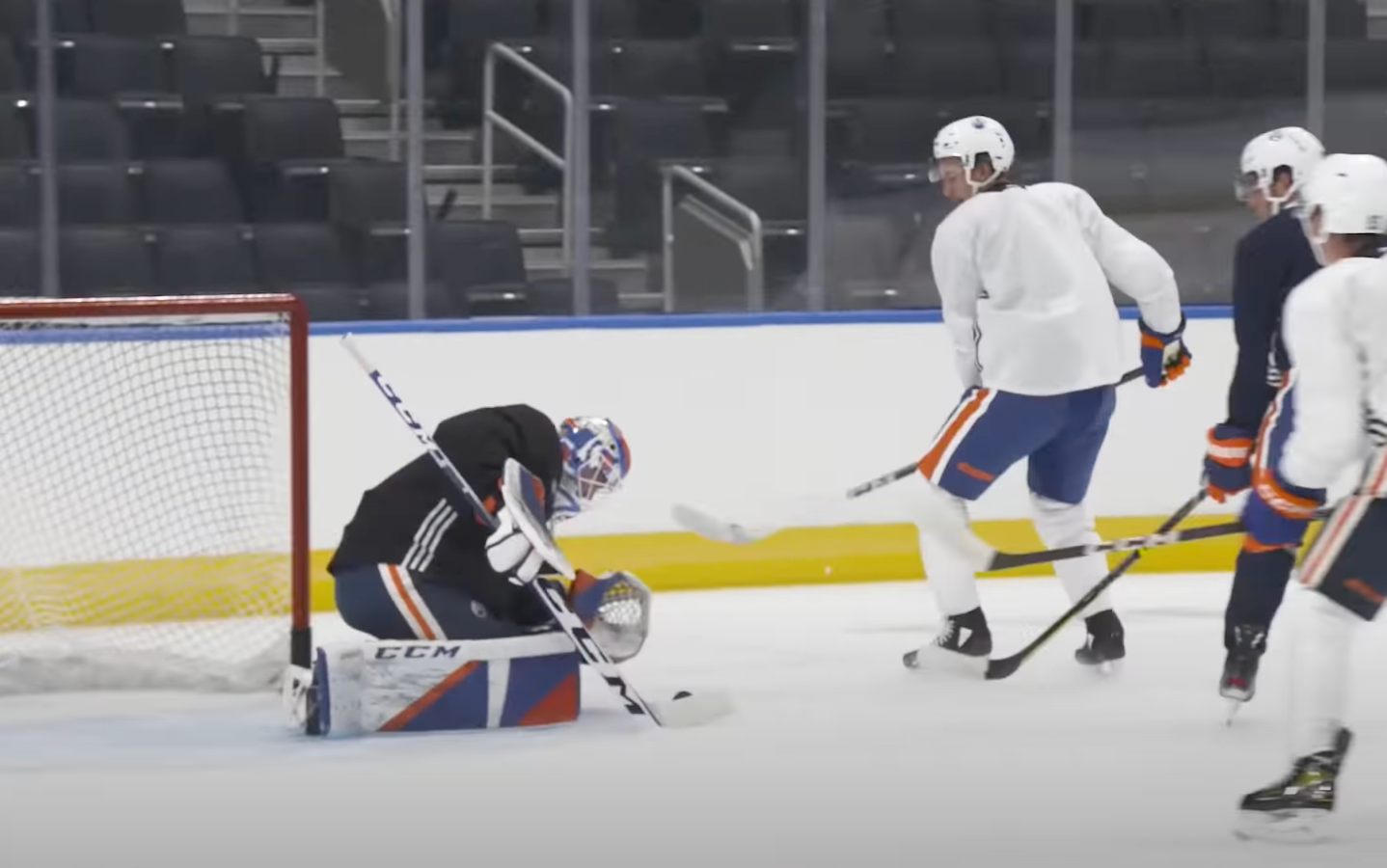 By Robin Brownlee
2 months ago
Comments
Jack Campbell, who’ll be the Edmonton Oilers go-to guy in the crease in tandem with Stuart Skinner after signing a five-year deal worth $25 million July 13, hasn’t stopped a puck for his new team yet, but is saying he loves it here. Talk about putting your best foot forward.
In that regard, he’s a bit like Zach Hyman, who got off on the right foot after coming over from the Toronto Maple Leafs last summer and never broke stride, enjoying the best season of his 421-game NHL career. If Campbell, who talked with reporters after a skate at Rogers Place Friday, can do likewise in the blue paint, he’s going to be a very popular player around here.
“I got out here this week,” Campbell said. “I had a great summer with the Toronto guys on the team. We’ve been working hard, picking their brains on everything. I just can’t wait to get started with this group. Everybody seems awesome . . . people are super friendly, and the boys are awesome and the staff’s been great.”
Advertisement
Ad
Advertisement
Ad
Campbell’s story we know. Drafted by Dallas in 2010 and having made stops in Texas, Los Angeles and Toronto, Campbell’s taken a long and winding road to get here. He’s paid his dues with 229 games in the minors. “I just knew all along that I can be a No.1 goalie, and it’s not just being a No. 1 goalie, my goal is to be the best I can be and help this team win a Stanley Cup and continue from there,” he said.

"I can't wait to get started with this group."

After a summer of training in the Toronto area with several of his new #Oilers teammates, Jack Campbell has arrived in Edmonton ahead of his first training camp with the squad. pic.twitter.com/7LDUVEY8Jt

Advertisement
Ad
Advertisement
Ad
Campbell, 30, certainly has a fan in Hyman, who played alongside the Oilers new stopper in the Big Smoke. Hyman has a better read on Campbell than anybody else around here after spending two full seasons as a teammate. Likewise, Cody Ceci and Tyson Barrie, who also wore the Maple Leaf with Campbell.
“I’ve known Soupy for a while now and he’s just a great guy, a really special human being,” said Hyman. “He’s really excited to be here, and I know he’s excited to get started and get on the ice with the guys.”
Former Oiler Craig Simpson saw plenty of Campbell with the Maple Leafs as a national broadcaster for Sportsnet. He likes him plenty as well. “He’s a hard worker in practice, so you’re never having questions about what his commitment is, and I think Jack will really endear himself to his teammates,” Simpson said.
Advertisement
Ad
Advertisement
Ad
“He’s an excellent teammate and I think he’s got the opportunity now on a really strong offensive team to be that calmness and that rock behind them to settle things down. It’s a wonderful opportunity that he’ll embrace. I think fans will really get to love the personality that he has.”
Asked to compare playing in Toronto to what he envisions in Edmonton, Campbell said: “More similarities to be honest. I mean, it’s two amazing fanbases – the passion fans have in both cities. I can’t wait to see Oil Country (and) playing in the orange and blue this year. We’ll see the differences, but so far, I’m just absolutely loving everything about being here.”

"We love spending time with each other & we love getting better."

Leon spoke with the media today following the latest informal skate as most of the #Oilers roster is already back in Edmonton with camp starting later this month. pic.twitter.com/ZhhlZWpDEF

Advertisement
Ad
Advertisement
Ad
Count me among those surprised how well Leon Draisaitl shook off the sprained ankle he suffered when Mikey Anderson of the Los Angeles Kings tackled him in a scrum in the first round of the post-season to play right through the conference final against Colorado.
“It took a little time obviously,” said Draisaitl, who put up 32 playoff points. “A little restricted on a bunch of things this summer, but obviously you try to work around it as good as you can and get yourself ready for two weeks from now. I think it helped my game a lot actually.
“It forced me to find different ways of being productive and bringing my game to our team, which at first was hard to figure out, but you get the hang of it. It just evolves you as a complete hockey player, knowing there is another game you can play. That is very calming, exciting. I don’t know if exciting is the right word. It feels good to know I can play a different game and be somewhat successful.”
Advertisement
Ad
Advertisement
Ad
Somewhat successful? Sure.

“When you come in as a new player, you’re trying to figure out your surroundings and other things. Now we’re all settled in, so it’s good to be back.” – Zach Hyman