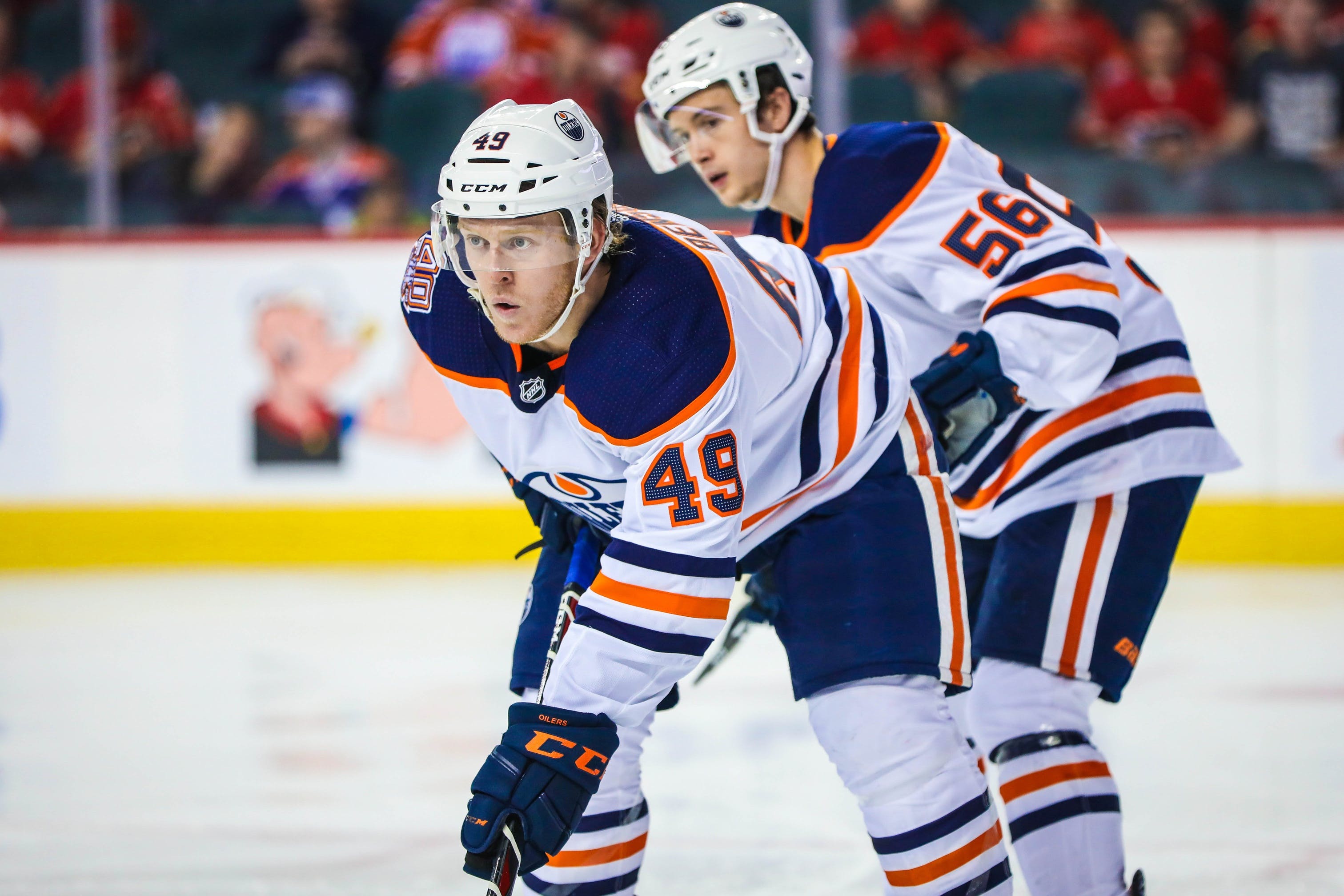 By Robin Brownlee
1 year ago
I don’t know if the one-year, two-way contract for $750,000 Tyler Benson signed with the Edmonton Oilers last week represents the Last Chance Motel for the talented former Southside Athletic Club star, but if it doesn’t, it’s a look-see bit of ink that has him unquestionably close to the same neighborhood.
Benson, selected 32nd by the Oilers from the Vancouver Giants in the 2016 Entry Draft, has spent parts of four seasons with the Bakersfield in the AHL, but has played just seven games with the Oilers since draft day. It’s time he finds a way to stay in the mix, which won’t be easy this season as the Oilers look deeper at forward than they have in many years.
“Personally, I feel I have the ability and the game that are NHL ready now,” said Benson. “I have the confidence just from the seven games a couple of years ago. I think if I can play with confidence on the ice that I can be a full-time player. Mentally, I wasn’t as strong as I am now, knowing that I can play with those players and at that level.”
Slowed by a hip injury and a hernia coming out of junior with the Giants, it seems like the unquestionably talented Benson has been playing catch-up for years. As a bantam, Benson set an AMBHL record with 146 points in just 33 games and was the first player taken by the Giants in the 2013 bantam draft.
After putting up good numbers with the Condors again in 2020-21 – all told, he has 141 points in 156 games with Bakersfield — Benson is looking for work in coach Dave Tippett’s bottom six. That doesn’t mean he can’t move up the line-up at some point, but first things first.
“Personally, I believe if it wasn’t for COVID, I would have had another chance to play with the Oilers last season,” Benson said. “But there wasn’t anything I could do about it and I’m just looking forward to the next opportunity.” 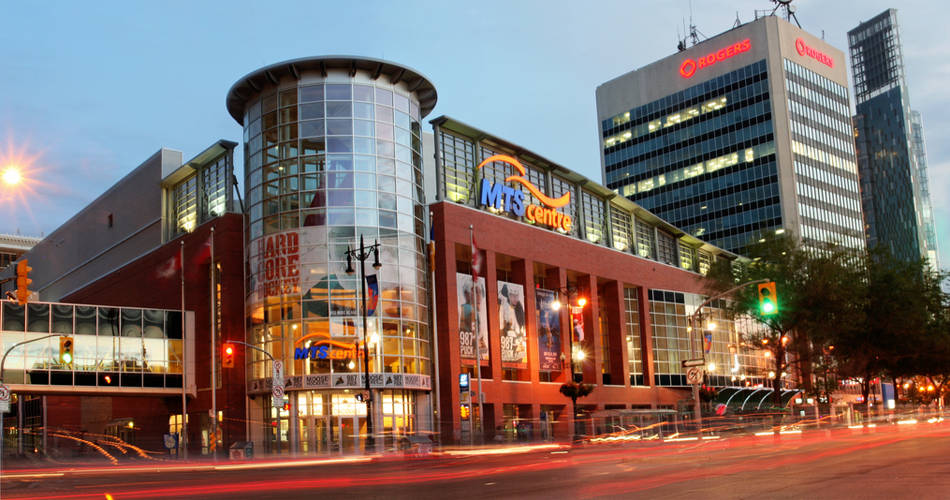 True North Sports and Entertainment caused a stir last week when it announced fans wanting to attend Winnipeg Jets’ games at the Canada Life Centre this season will need to supply proof they’re fully vaccinated against COVID and will have to wear masks. Likewise for employees and all event staff with the Jets open to full-capacity crowds for the season.
That’s a decision that was made after TNSE polled its season ticket holders, who made it clear they wanted safeguards in place. While the Oilers haven’t put vaccination requirements in place as of today, expect them to poll their season ticket base as the Jets did before putting in place policies regarding COVID at Rogers Place.
“We are in on-going conversations with Alberta Health, Canadian venues, the NHL and other key stakeholders,” an Oilers spokesperson told CTV News on Thursday. “Once finalized, we will communicate our plan at an appropriate time in advance on the 2021-22 NHL season.”
The Oilers open the season against Vancouver at home Oct. 13. Of course, much can change before then – as was the case on Friday when the UCP government backed off a plan to end testing, tracing and isolating Monday, extending those measures by six weeks. The Oilers say they’re planning for multiple scenarios based on AHS guidelines. 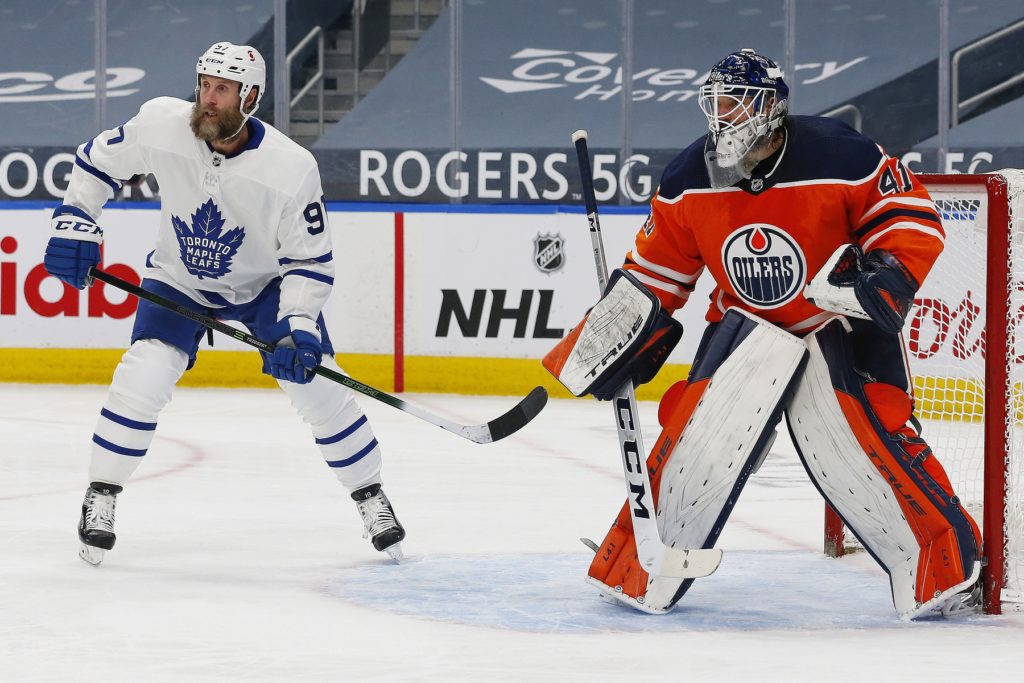 Mar 1, 2021; Edmonton, Alberta, CAN; Toronto Maple Leafs forward Joe Thornton (97) and Edmonton Oilers goaltender Mike Smith (41) follow the play during the second period at Rogers Place. Mandatory Credit: Perry Nelson-USA TODAY Sports
There’s been a lot of water under the bridge since Joe Thornton showed up in Edmonton as a clean-shaven kid with the Boston Bruins, but Jumbo is one of those guys who won’t stop playing until they tear the jersey off his back. I’m not surprised Thornton, now 42, signed a one-year deal with the Florida Panthers this week.
Thornton has 1,680 regular season games and 186 more in the playoffs with Boston, San Jose and Toronto on his resume. He’s got an Art Ross Trophy and a Hart Memorial Trophy. What he doesn’t have is a Stanley Cup ring. I doubt he’ll earn one out in the retirement community of Sunrise, where the Panthers play, but he won’t have to go far to find a lawn bowling match or a game of shuffleboard.