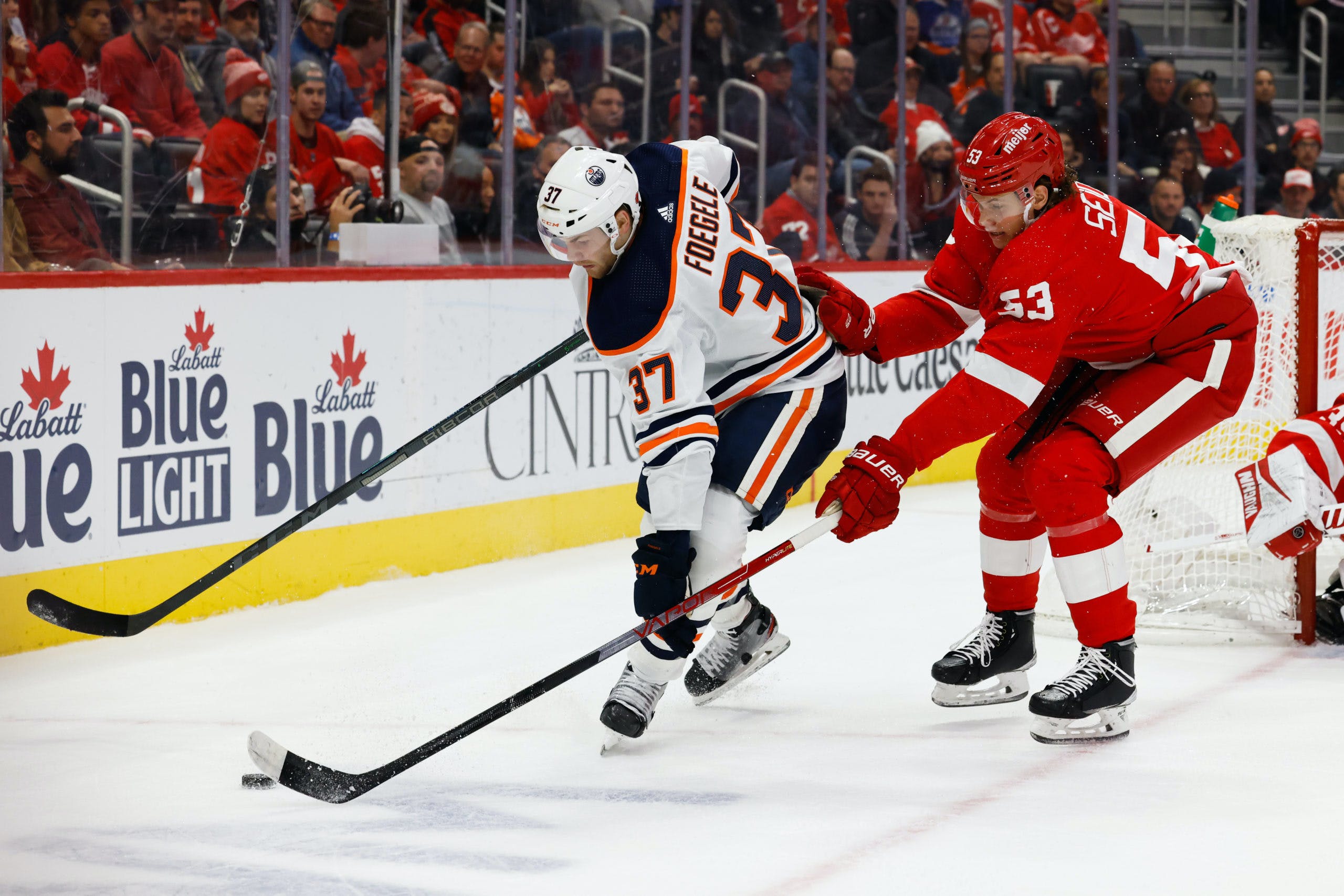 By Robin Brownlee
1 year ago
For seven games or so to start this season, Warren Foegele looked exactly like what the Edmonton Oilers were looking for when they sent defenceman Ethan Bear to the Carolina Hurricanes to get him this off-season. Since then, not so much.
Foegele, 25, was brought in as a third-line player to provide scoring depth, puck pressure and energy. He did exactly that with two goals and a couple of assists in those first seven games, but it’s been a struggle for him since. When the Hurricanes came calling last night with the Oilers on a four-game losing skid, Foegele hadn’t scored a goal in 18 games and his overall play had dropped off.
Make it five consecutive losses for the Oilers, who’ve lost their scoring touch from top to bottom in the line-up during a stretch that’s seen them drop to 16-10-0. And it’s now 19 games with no sniff for Foegele as the Hurricanes beat the suddenly wooden-handed Oilers 3-1.
“This year’s been a couple of ups and downs for myself,” Foegele told reporters after the morning skate. “I think the one thing I’m learning is control what you can control, you know? I thought the last couple games our line has been going. We’ve just got to keep playing that way and build off it.”
When teams meet for the first time since a trade like the Oilers and Canes did last night, it’s inevitable discussions about how the deal is working out for both teams is going to come up. It’s like, “We like this Bear kid just fine. How is Warren working out for you guys?” That’s not something that Foegele or Bear can spend much time worrying about. The best-case scenario is it works out on both ends.
“It’s obviously bittersweet,” said Foegele, who had a chance in close in the final minute but couldn’t cash it in. “I’ve had this date circled for a long time. I’m super excited. “I have nothing but great things to say about my time in Carolina. All those guys were great to me. I was a big fan of Roddy (coach Rod Brind’Amour) and how everyone treated me there.”
Asked about his time in Edmonton, Bear took the high road. I’ll leave it at that.

CHICKEN AND THE EGG 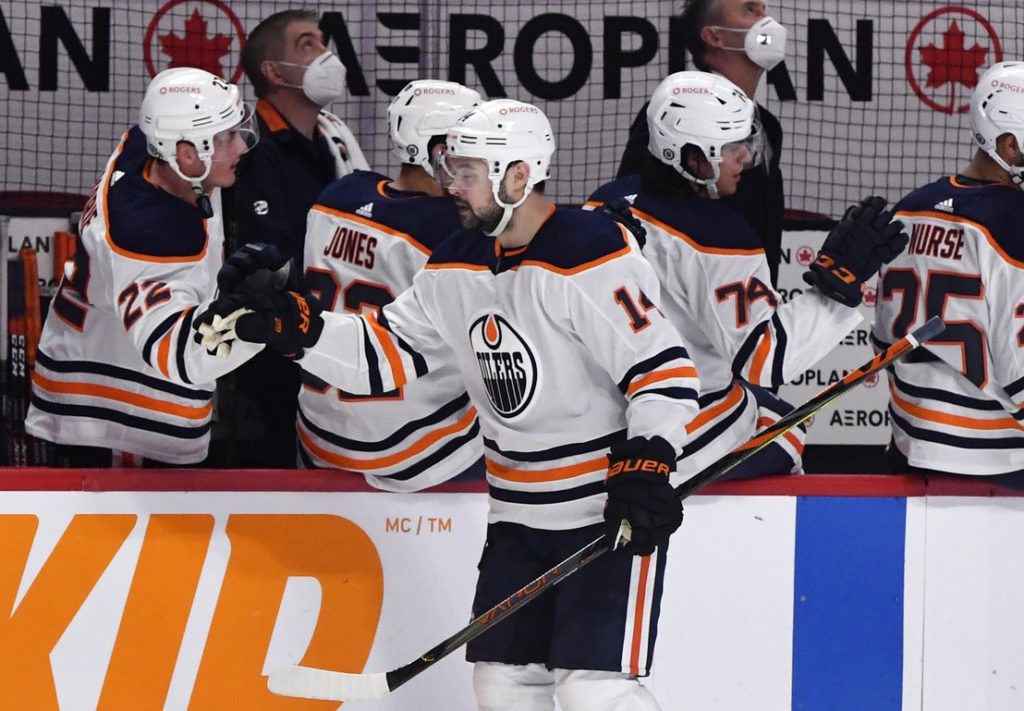 Apr 5, 2021; Montreal, Quebec, CAN; Edmonton Oilers forward Devin Shore (14) reacts with teammates after scoring a goal against the Montreal Canadiens during the first period at the Bell Centre. Mandatory Credit: Eric Bolte-USA TODAY Sports
Consternation about the lack of scoring depth with the Oilers has been an issue for weeks, although I’ve got to admit I didn’t realize the third and fourth lines hadn’t contributed a single goal in nine games until Mark Spector of Sportsnet wrote about it after Thursday’s 3-2 loss to the Boston Bruins. Now, it’s 10 games.
Is it any wonder Connor McDavid and Leon Draisaitl looked bagged against Boston for much of the game? Draisaitl, who led NHL forwards with 22:59 in average ice time going into the game against Carolina Saturday, played 26:35 and finished with a couple of goals. McDavid, second at 22:32, played 26:47 and had a pair of power-play goals.
Leaning on Draisaitl and McDavid so much is a chicken-and-egg thing. Lack of scoring from the rest of the line-up and playing from behind, as the Oilers have done far too often, means Draisaitl and McDavid play more. That’s fine here and there, but what we’ve seen lately isn’t here and there – especially when you factor in time on the power play.
“We just need to keep painting the right picture, doing the right things, getting pucks to the net, bringing bodies to the net and banging in an ugly one,” said McDavid, who is never going to complain about being sent over the boards too often. “When you are slumping you just need to find a way to get it done and get a win any way you can and go from there.”
To borrow from Gene Principe, McDavid is painting the most positive picture possible. Shuffling the same non-productive players into different spots in the line-up isn’t going to make a difference. If this continues, it’s over to you, Ken Holland.

Both ends of the Battle of Alberta were represented in the Western Hockey’s League’s annual Bantam Draft last week.
Forward Tij Iginla, 15, the son of hall-of-famer Jarome Iginla, was selected ninth overall by the Seattle Thunderbirds from the Rinks Hockey Academy in Kelowna.
Later, forward Teo Pisani, the son of former Oiler Fernando Pisani, was taken by the Edmonton Oil Kings in the fifth round. Teo is a young man it’s easy to cheer for. I’m guessing you’ll read more about that down the road.