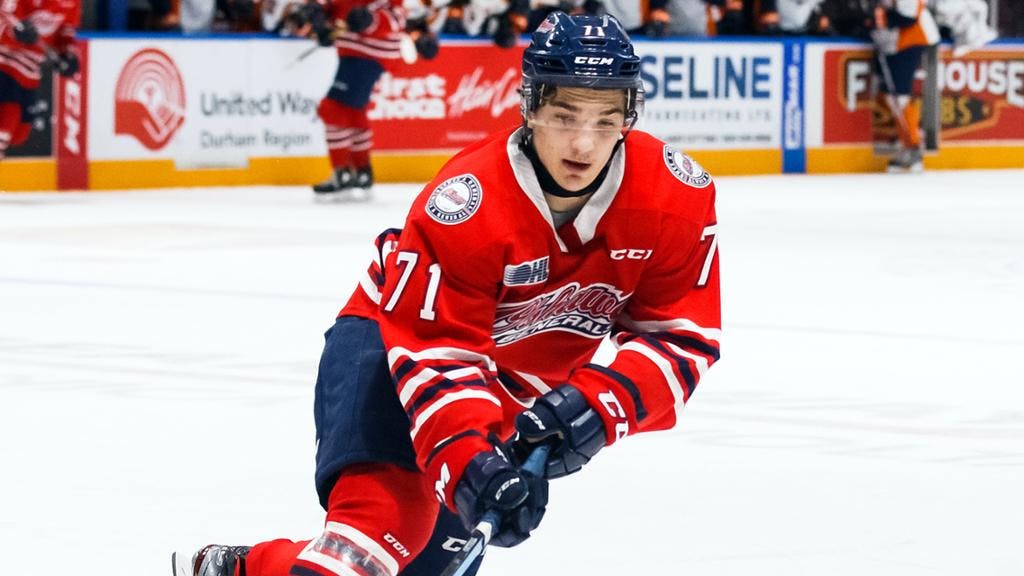 By Liam Horrobin
9 months ago
The playoffs are upon us around the junior hockey world, especially in the Canadian Hockey League.
The Oilers have four prospects competing in the CHL postseason: Jake Chiasson (Brandon Wheat Kings), Matvey Petrov (North Bay Battalion), Tyler Tullio (Oshawa Generals) and Xavier Bourgault (Shawinigan Cataractes). Meanwhile, the WHL and OHL playoffs get going tonight, and we’ll have more on how those are going next week.
As for today, let’s talk about how everyone did last week.

Bakersfield has recently hit the injury bug but is still finding ways to win.
They split this past week, losing their first game 3-1 versus Abbotsford, but then back in the win column last night with a 4-1 win in San Jose.
Cooper Marody returned to the lineup for that game against Abbotsford after missing the previous six. He managed to grab an assist on the Condors’ lone goal scored by Yanni Kaldis. Kaldis has been great for the Condors with four goals and nine points in his last ten games.
Tyler Benson registered a multi-point game in that win over San Jose. He’s now scored three goals since returning to Bakersfield. Stuart Skinner had another excellent start for Bakersfield, stopping 29 of 30 shots for his 19th win of the season.

We haven’t spoken about Tyler Tullio now for a couple of weeks. He’s been playing some outstanding hockey and has ended the OHL season on a solid note.
Last week, he took his points tally to 86 after a three-point game in his last game of the season. Tullio scored his 41st of the season, which gave Oshawa a 2-1 lead. He was involved in the Generals’ other two goals, but it wasn’t enough as they fell 4-3.
Oshawa faced North Bay in their final game of the season, which would’ve seen Tullio go up against Matvey Petrov. However, Tullio sat that game out as Petrov led his team to a 5-4 shootout victory. Petrov scored the tying goal late in that game to take his goal tally to 40.

While the Edmonton Oil Kings don’t have any Oilers prospects, I’ll be done at Rogers Place tonight watching their game against the Lethbridge Hurricanes.
The Oil Kings have had a great season thus far and finished second in the Eastern Conference. In the regular season, they went 6-2-0 against the Hurricanes and outscored them 31 to 15. However, in their most recent meeting, Lethbridge beat the Oil Kings 5-1 at Rogers Place.
Edmonton has plenty of firepower with six players with over 20 goals this season which doesn’t include St Louis Blues first-round pick Jake Neighbours.
It should be a fun one down at Rogers Place. If you want more Oil Kings updates, go check out my Twitter.
Nation Takes
Oilers Talk
Recent articles from Liam Horrobin