By Cam Lewis
3 months ago
This time last year, Evan Bouchard was the top prospect in the Edmonton Oilers organization.
After being brought along slowly over the previous two seasons, Bouchard cracked the Oilers’ roster out of training camp and quickly established himself as a top-four defenceman. This was a critical development for the Oilers as the team had just lost Adam Larsson, their best right-handed defender, in free agency.
Now that Bouchard has graduated, Philip Broberg is the top prospect in the organization. The hope is that Edmonton’s first pick from the 2019 NHL Draft can help solve the puzzle on the team’s blueline and fill a hole that’s been open since Oscar Klefbom’s career came to a premature end. 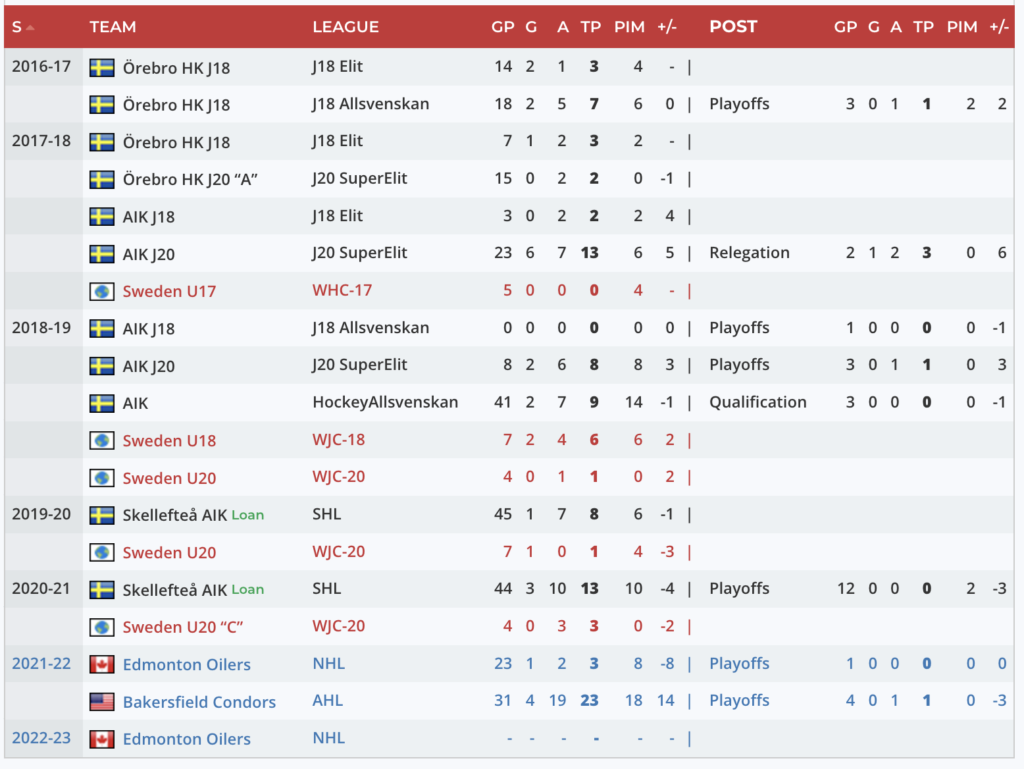 Ken Holland was hired in May of 2019 and, a couple of months later, he made Broberg his first draft choice as general manager of the Oilers. With names such as Trevor Zegras and Cole Caufield on the table, this selection was met with some criticism, but there was clear logic behind Holland going with a defenceman in his first draft given they take longer to develop.
Following the selection, Corey Pronman of The Athletic spoke about Broberg having a tremendous amount of upside given how good his skating was for his size…

“In Broberg, the Oilers get an immensely talented defenseman and a unique player in terms of how elite his skating is for 6-foot-3. It’s a dimensional attribute and will make him stand out in the NHL. He’s not a high-end puck skills or passer, but he gets a bad rap in that area. He has skill, he makes plays, he can operate on a power play. His game is projected to be a top-pair guy who can drive play.
It’s interesting to see how he fits in Edmonton, with left-handed defensemen in Darnell Nurse and Oscar Klefbom, who have some rhymes of Broberg’s game. But he’s a heck of an asset to add to a team. The Oilers have depth at defense in their organization and can take their time with him.”

That last paragraph from Pronman is an interesting reminder of how quickly things can change in the NHL and why going with Broberg in Holland’s first draft with the Oilers made sense.
The thought was that the Oilers could slow-play Broberg because they already had Nurse and Klefbom at the NHL level. Here we are now, just over three years later, and the Oilers are hoping that Broberg can step in at the age of 21 and help fill the hole on the team’s blueline left by Klefbom’s career coming to an end due to injury.
The Oilers missed Klefbom in 2021 and it took a mammoth season from Darnell Nurse to compensate for his absence. In 2021-22, Holland acquired a veteran defender in Duncan Keith to fill the Klefbom void in the short-term and then added Brett Kulak at the trade deadline for more depth. This year, Keith is gone and Kulak will likely start as the team’s second left-handed defender, but the hope is that sooner rather than later Broberg can step in and become the long-term Klefbom replacement in Edmonton’s top four.
Can Broberg be a top-four defender for the Oilers by the time the playoffs roll around? That’s a big ask, but he’s performed better than Klefbom did at each stage of his development as a prospect…
Klefbom started the 2014-15 season in the AHL and played just nine games before getting called up to the Oilers for good. In 60 games with the Oilers that season, Klefbom played an average of 22:00 per night, a significant jump from the 15:48 he played per game during his NHL debut the previous season.
These stats only tell part of the story and the contexts are wildly different, as Klefbom joined a basement-feeding team with virtually zero depth on the blueline while Broberg is trying to break into the NHL on a contender, but this comparison suggests that a breakout performance could be right around the corner for the young Swede.
It’s difficult to analyze results from the Swedish Hockey League but what we saw from Broberg in his first season in North America was legitimately impressive. Broberg scored 23 points and had a plus-14 rating in 31 games in the AHL in 2021-22 and had among the best on-ice goal differentials on the Bakersfield Condors.
His performance at the NHL level also steadily improved when Jay Woodcroft and Dave Manson took over behind the bench for Dave Tippett and Jim Playfair. With Tippett, Broberg played 14:35 per game and had a 3-to-9 goal differential at even-strength. With Woodcroft, Broberg’s time on ice dipped to 10:41 per game, but his goal differential improved to an even 8-to-8.
The expectation for Broberg in 2022-23 is that he establishes himself as an NHL defenceman and the hope is that he can grab hold of a top-four role. He might start off in the AHL as Klefbom did in his second season in North America but it’s hard to imagine Broberg being down for too long. There are other names in the mix, such as the waiver-eligible Dmitri Samorukov and the newly-signed veteran Ryan Murray, but none have the talent or upside that Broberg does.
For years Evan Bouchard and Philip Broberg have been viewed as the long-term replacements for Adam Larsson and Oscar Klefbom on Edmonton’s blueline. The future might be now.
For reference, players who I consider to be “prospects” for this countdown are those who have played fewer than 50 NHL games and are 23 years old or younger at the start of the 2022-23 season.