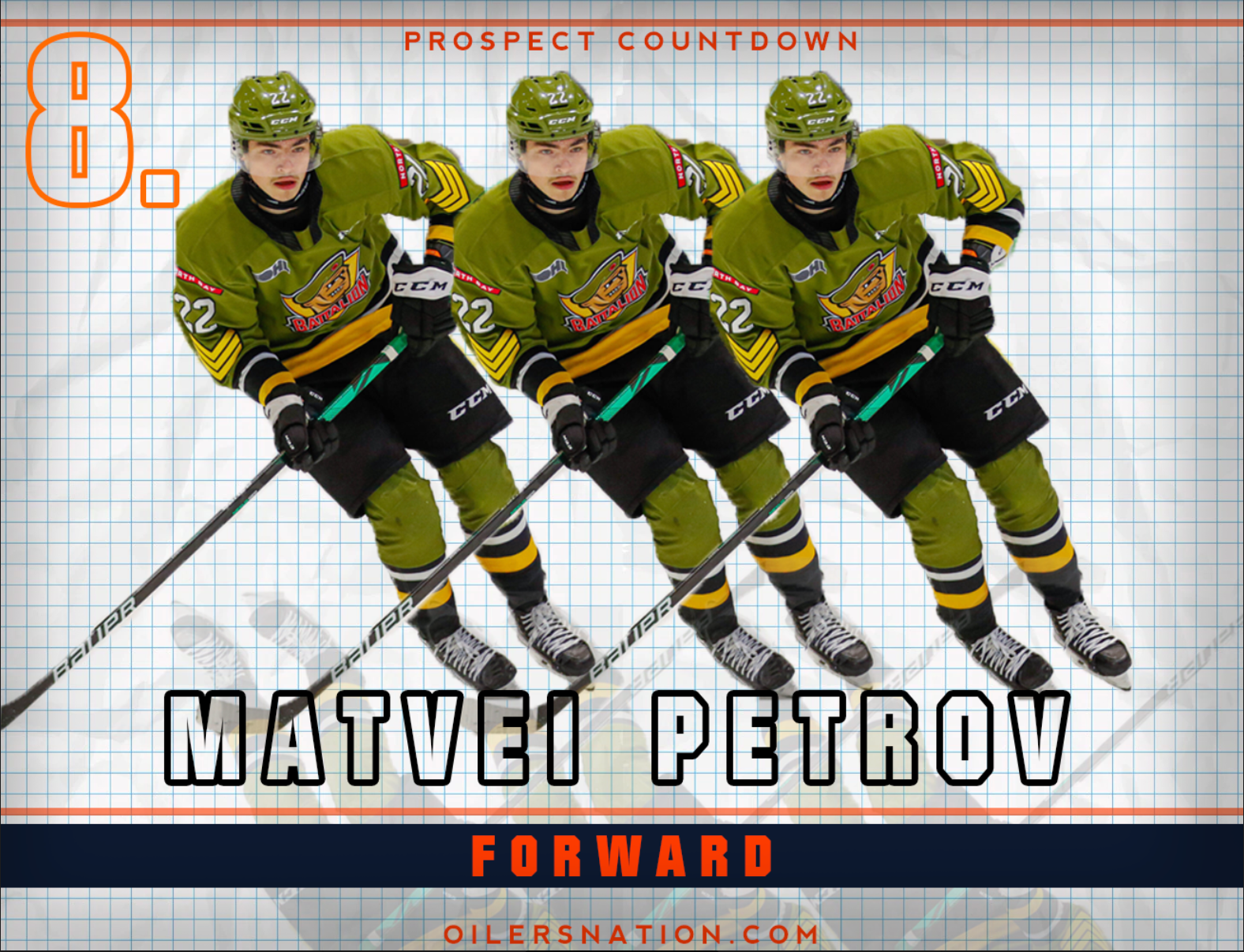 Photo credit: Kennedy Bugardt
By Cam Lewis
5 months ago
Comments
Over the past few years, the Edmonton Oilers’ priority at the draft table has been stocking the organization with skilled forwards.
Beyond first-round picks Dylan Holloway, Xavier Bourgault, and Reid Schaefer, the Oilers appear to have found themselves some gems in the later rounds. One of those players is Matvei Petrov, who the Oilers snagged in the sixth round of the 2021 NHL Draft with the pick that they offered to Kyle Dubas in exchange for Zach Hyman’s UFA rights.
Petrov came overseas in 2021-22 to join the North Bay Batallion of the OHL and exploded with 40 goals and 90 points over the course of 63 games. Though his play away from the puck could use some work, that level of production from an 18-year-old in the OHL is eye-opening.
The Oilers have sought prospects who can score goals and Petrov has proved in the OHL that he can do exactly that. The question now is whether he can continue to score goals at the AHL level. If he can, Petrov will find himself in the conversation for the steal of the 2021 NHL Draft.
Advertisement
Ad
Advertisement
Ad

Position: Right / Left Wing
Shoots: Right
Nationality: Russia
Date of Birth: March 12, 2003
Drafted: 2021, No. 180 overall (EDM)
Height: 6’2″ / 188 cm
Weight: 179 lbs / 81 kg
Petrov was the No. 1 overall selection in the 2020 CHL Import Draft by the Battalion and was described at the time as one of the most talented players in Russia for his age.
Petrov spent the 2020-21 season playing in the MHL, which is essentially Russia’s version of the CHL, because the OHL’s season was wiped due to COVID-19. He scored 22 goals and 42 points in 58 games in the MHL and was listed at No. 113 in The Athletic’s pre-draft rankings.
The sentiment around Petrov ahead of the 2021 NHL Draft was pretty much the same as it was one year earlier when he was the top CHL import pick, which is that he stood out with the puck on his stick but play away from the puck left quite a bit to be desired…
Advertisement
Ad
Advertisement
Ad

“Petrov was the No. 1 pick in the CHL Import Draft to North Bay but played in Russia all season where he was solid in the junior league there. He’s a player who stands out with the puck on his stick. He makes skill plays frequently through defenders and shows a lot of creativity as a playmaker from the perimeter and in small areas. Petrov also has a big shot that can score from range. He has a technically smooth skating stride, but it lacks quickness to separate from opponents. Petrov can play too much on the perimeter, though, and while he can score from there you’d like to see him generate more in the high-percentage areas. In a sentence, Petrov has a chance due to his skill and scoring, but he will have to add elements to play in the NHL.” – Corey Pronman.

The Oilers wound up snagging Petrov in the sixth round of the draft, quite a bit lower than he was ranked by just about every major outlet.
Following a 40-goal, 90-point 18-year-old season in the OHL, it’s become incredibly puzzling that Petrov fell as far in the draft as he did. Even with the questions surrounding his play away from the puck, Petrov boasts the most important skill in hockey, which is the ability to score goals, so you’d think a team would have taken a flyer on him sooner.

here's all three goals scored by oilers prospect matvey petrov in his ohl debut last night. he took eight shots, too, and can clearly shoot the puck. going to be an intriguing prospect to watch as a sixth rounder. pic.twitter.com/Dtv9e0N1FB

But the reality is that scouting was a big challenge during the pandemic for a variety of reasons and we’re going to eventually look back on the 2020, 2021, and 2022 classes and find a wealth of players who were selected much lower than they should have been.
Advertisement
Ad
Advertisement
Ad
So far, Petrov is one of those players. Among 18-year-olds in the OHL in 2021-22, only three players scored more goals at a higher per-game clip than Petrov did — Mason McTavish (drafted No. 3 in 2021), Brennan Othmann (No. 16), Wyatt Johnston (No. 23), and Ryan Winterton (No. 67). That’s very good company for a sixth-round pick.
While Petrov is eligible to join the Bakersfield Condors of the AHL this fall since he was drafted out of Russia and not the CHL, we’ll likely see the Oilers keep him in the OHL for another season. The Oilers have a handful of wingers turning pro and having Petrov try to make the transition as a 19-year-old doesn’t seem prudent.
It’ll be exciting to see what kind of numbers Petrov can produce in his second go-around at the OHL level but the important thing at this stage of his career is rounding out the other aspects of his game, such as his explosiveness, physicality, and play without the puck. Spending a season working on these skills against lighter competition in the OHL will make Petrov’s transition to the professional game much smoother.
Advertisement
Ad
Advertisement
Ad
For reference, players who I consider to be “prospects” for this countdown are those who have played fewer than 50 NHL games and are 23 years old or younger at the start of the 2022-23 season.