By Cam Lewis
5 months ago
The blueline in Bakersfield is a point of interest in the Oilers’ organization right now.
The Oilers have a handful of young defenders pushing for roles on the big-league club and there will be opportunities throughout the year, especially considering the Jay Woodcroft and Dave Manson coaching staff is comfortable operating with seven defenders in a lineup.
The names in the mix are Markus Niemelainen, who impressed in his cup of coffee last season, Dmitri Samorukov, who’s waiver-eligible, and a trio of NCAA graduates, Vincent Desharnais, Phil Kemp, and Mike Kesselring.
Today, we’ll focus on Kesselring, a player who was a long-range project when he was drafted and who has developed into a player who has upside beyond that of an AHL-NHL tweener. 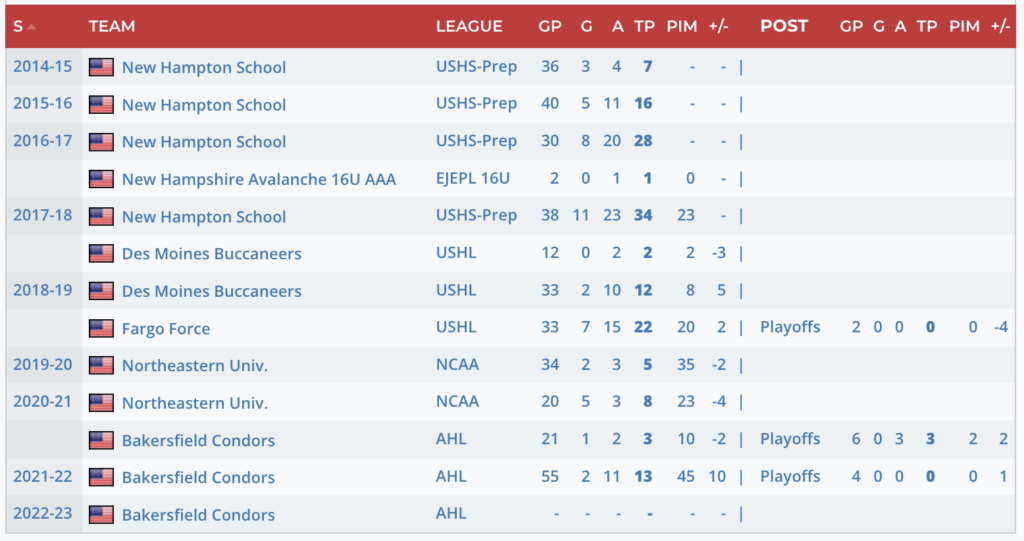 Kesselring came up through the United States high school system and was drafted by the Oilers in the sixth round of the 2018 NHL Draft after he put up 34 points in 38 games playing for New Hampton School in New Hampshire.
In his post-draft season, Kesselring scored 34 points across 66 games for the Des Moines Buccaneers and Fargo Force of the USHL and was considered one of the top NCAA recruits among defenders from the New England area.
He wound up joining Northeastern University for 2019-20 and scored five points in 34 games as a freshman on the team’s bottom pairing. Kesselring took on a larger role the following season, including getting some power-play time, and his production improved to eight points in 20 games in the COVID-shortened 2020-21 season.
Once Northeastern’s season finished, Kesselring signed a three-year entry-level contract with the Oilers and finished the 2020-21 season with the Bakersfield Condors on an AHL contract. He scored three points across 21 games in his AHL debut and then added three points in six playoff games.
The 2021-22 season was Kesselring’s first full season playing at the professional level. He scored 13 points for the Condors over the course of 55 regular-season games and had a plus-10 rating.
When Kesselring was drafted, he was described as a very raw prospect, as his big frame and good skating ability represented the base of a quality player, but he needed time to get stronger and learn to play the game at a faster pace. The comparable used for Kesselring at that time was Tom Poti, a high school defender the Oilers selected in the third round of the 1996 NHL Draft…

“In terms of my strengths, I move the puck and can get up into the play and create offense,” Michael said. “As far as things I still have to work on, I’m 6-4, so I still have to fill out my frame — stay in the gym. And as a bigger guy you always have to work on your skating.”
Michael was born in South Carolina, but spent most of his younger days in Manchester. He collected 34 points in 38 games with New Hampton last season, and then played 12 games for Des Moines in the USHL. Casey said he expects his son to play a full season with Des Moines next season and then it will be on to college hockey.
“He skates well for a big kid,” Casey said. “He’s good offensively — like (former Boston University defenseman) Tom Poti from my era. He’s not overly physical, but he’s smart and can get things going on the power play.”

With Kesselring, we’ve seen a player who has improved each season since being drafted and has developed from a rangy prospect with good tools to a quality AHL defender. While other defenders in Bakersfield such as Kemp or Niemelainen might be more NHL-ready right now and are more likely to play for the Oilers in 2022-23, Kesselring boasts more upside given his offensive ability.
Going from an AHL defender into an NHL defender is obviously the biggest step for a prospect to make, but given the combination of raw tools and year-to-year improvement we’ve seen from Kesselring, there’s plenty of reason to be optimistic that he can emerge into an effective, two-way third pairing defender.
Kesselring will return to Bakersfield for his second full season at the pro level this fall and the hope is that he can take another step forward and take on a larger role with the team. He has plenty of competition for playing time with the Condors but Kesselring is just headed into the second season of his entry-level deal so there’s plenty of time for him to hone his game.
For reference, players who I consider to be “prospects” for this countdown are those who have played fewer than 50 NHL games and are 23 years old or younger at the start of the 2022-23 season.