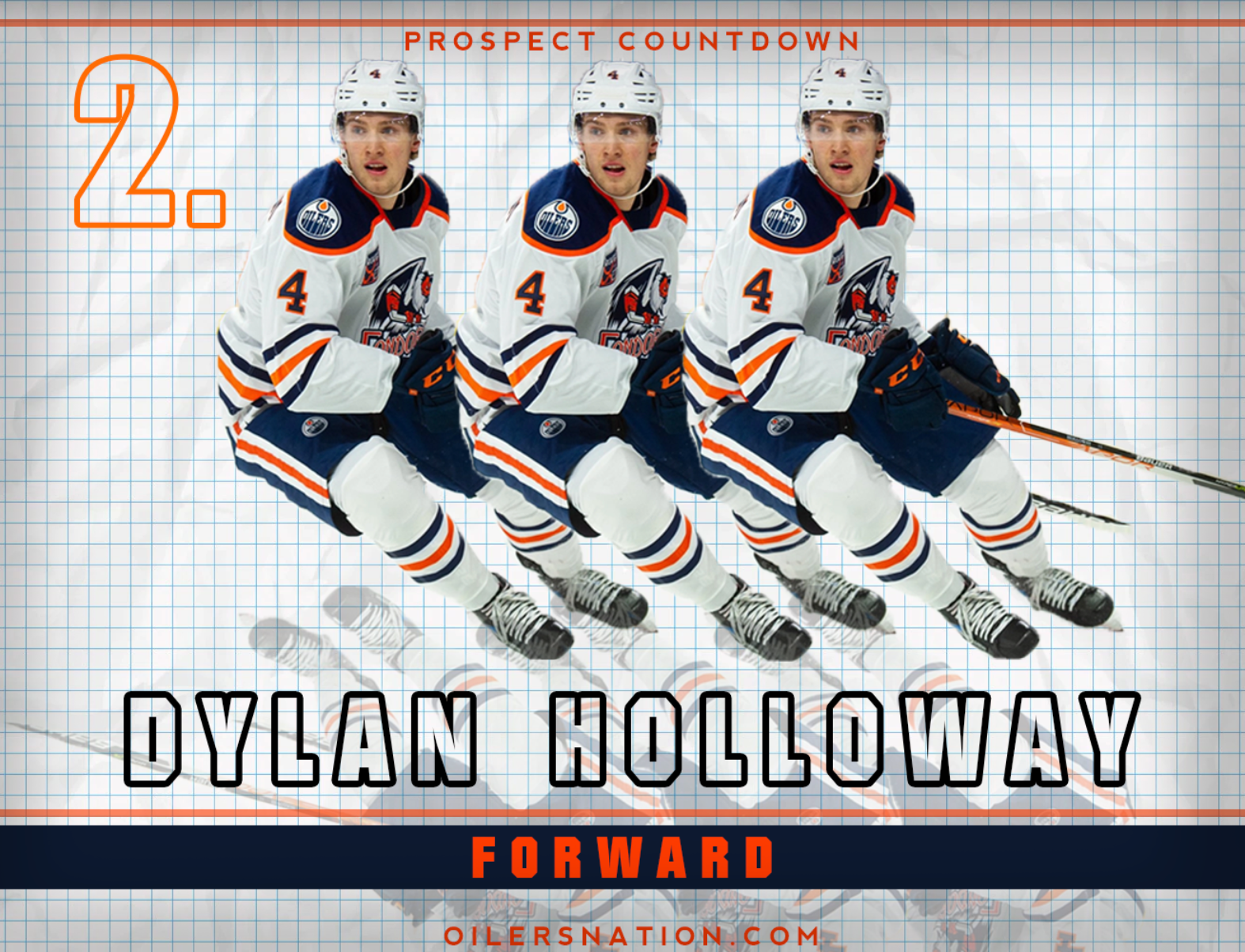 By Cam Lewis
5 months ago
At the 2020 NHL Draft, the Oilers selected Dylan Holloway with the No. 14 overall pick, kicking off a trend in which the organization would actively focus on loading the system with quality forward prospects.
Between the 2020 and 2022 NHL Drafts, the Oilers have made 16 selections and 12 of them were used on forwards. The goal here was to build a pipeline of talented young forwards who could contribute to the NHL club while they’re still on entry-level contracts, an integral strategy in the salary cap era.
Edmonton’s system is now loaded with exciting forward prospects such as Matvei Petrov, Tyler Tullio, Carter Savoie, Xavier Bourgault, and Reid Schaefer, but the name at the top of the list is Holloway, as nobody else matches the complete range of physical skills, athletic ability, and vision that he does.
Holloway had an excellent post-draft season in the NCAA but a late-season injury and some bad medical advice ultimately limited his first professional season to just 38 games at the AHL level and one game at the NHL level.
While Holloway is a little bit behind where he was expected to be by now in terms of actual games played, he has such a tantalizing combination of speed and skill that it won’t be easy for the Oilers to keep him down for seasoning for very long, if at all. 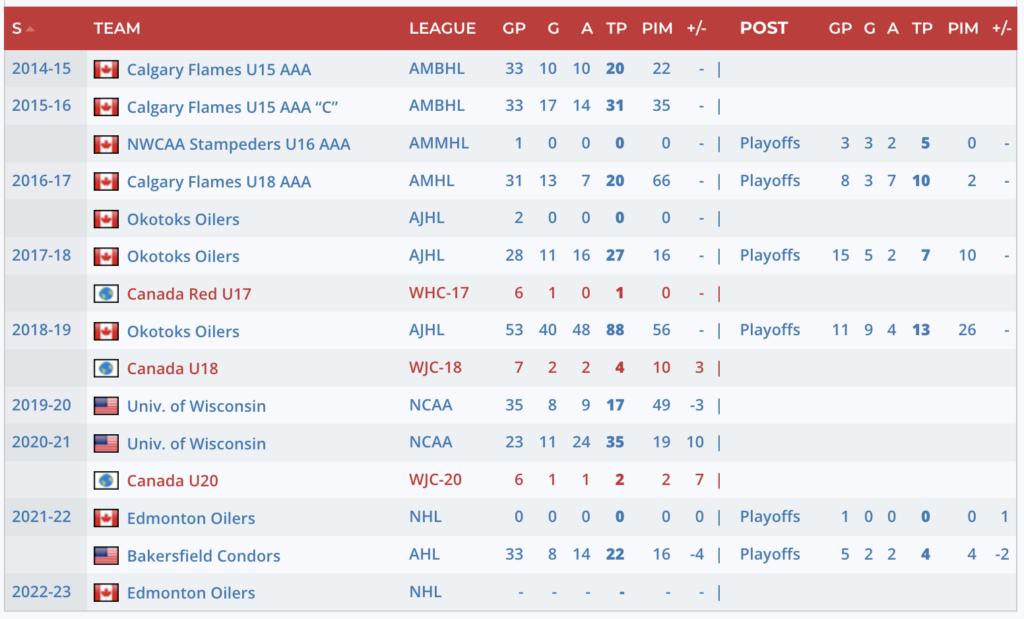 In 2018-19, Holloway put together an excellent season for the Okotoks Oilers of the AJHL, scoring 40 goals and 88 points over the course of 53 games. That performance earned him the honour of winning the league’s Most Valuable Player award, an impressive accomplishment for a 17-year-old.
Holloway joined the Wisconsin Badgers in 2019-20 and scored eight goals and 17 points over 35 games as one of the youngest players in the NCAA. The Oilers selected Holloway with the No. 14 overall pick at the draft that summer and he then broke out in 2020-21 with 11 goals and 35 points across 23 games for the Badgers as a sophomore.
The plan was for Holloway to join the Bakersfield Condors and start his professional career following his the conclusion of his second NCAA season, but an injury ultimately got in the way of that happening.
Holloway jammed his wrist into the boards in a Big Ten playoff game against Penn State on March 15. He said that it hurt on the bench immediately after and it was even worse after the game. The next morning, Holloway couldn’t fully move his wrist, but the Badgers were set to play in the Big Ten Final against the University of Minnesota, so Holloway played through it.
After winning that game, Holloway got an X-ray and learned that he had suffered a fracture in his scaphoid. He had surgery a few days later and was told he would be fine to suit up for the first round of the NCAA Championship against Bemidji State on March 26.
The Badgers lost and Holloway signed his entry-level deal and jumped on an airplane to join the Condors. He practiced and trained with the team but wasn’t deemed fit for game action because of his nagging wrist issue. Holloway wound up watching from the sidelines as the Condors won the Pacific Division title.
Come September, Holloway’s wrist was still an issue, and he wound up getting another surgery done on his wrist in order to deal with the problem once and for all. He didn’t make his debut with the Condors until January 22.
When Holloway was finally ready to return to action after 10 months off, he spoke about how long his recovery process was and how excited he was to finally play a game…

“I just feel like it took forever to recover. The bone’s 100 percent healed, which is awesome, but the wrist isn’t quite the same. It’ll probably take a few more months to get it back to the normal range of motion and pain. But I can still do everything on the ice. I’m just so excited to play.”

Holloway scored eight goals and 22 points over 33 games in his rookie season in the AHL, solid production given the circumstances. Holloway’s production improved as time went along, as he scored nine points in his final seven regular-season games and four goals in five playoff games.
If not for the injury, Holloway would have surely been given a nice cup of coffee at the NHL level, but, instead, he only got into one game with the Oilers. It came in Game 4 of the Western Conference Final as Evander Kane was suspended and he played just three minutes and 27 seconds.
This season, we’ll finally get to see what Holloway can do at the NHL level. The question now is when that happens. The Oilers are deep on the left side, with Evander Kane, Ryan Nugent-Hopkins, Zach Hyman, and Warren Foegele in the mix so Holloway’s spot on the team isn’t guaranteed.
We might see Holloway follow a similar path to that of Kailer Yamamoto. Edmonton’s first-round pick from the 2017 NHL Draft played just 47 games between the AHL and NHL in his first professional season thanks to a nagging wrist injury. Yamamoto started the 2019-20 season in the AHL and came up on New Year’s Eve and hasn’t looked back since.
If Holloway is so good that the team can’t warrant sending him down, that’s great. If he needs some more seasoning in the AHL, that’s fine as well. Holloway is a big part of the team’s future and the Oilers can afford to take things slowly if need be.
For reference, players who I consider to be “prospects” for this countdown are those who have played fewer than 50 NHL games and are 23 years old or younger at the start of the 2022-23 season.