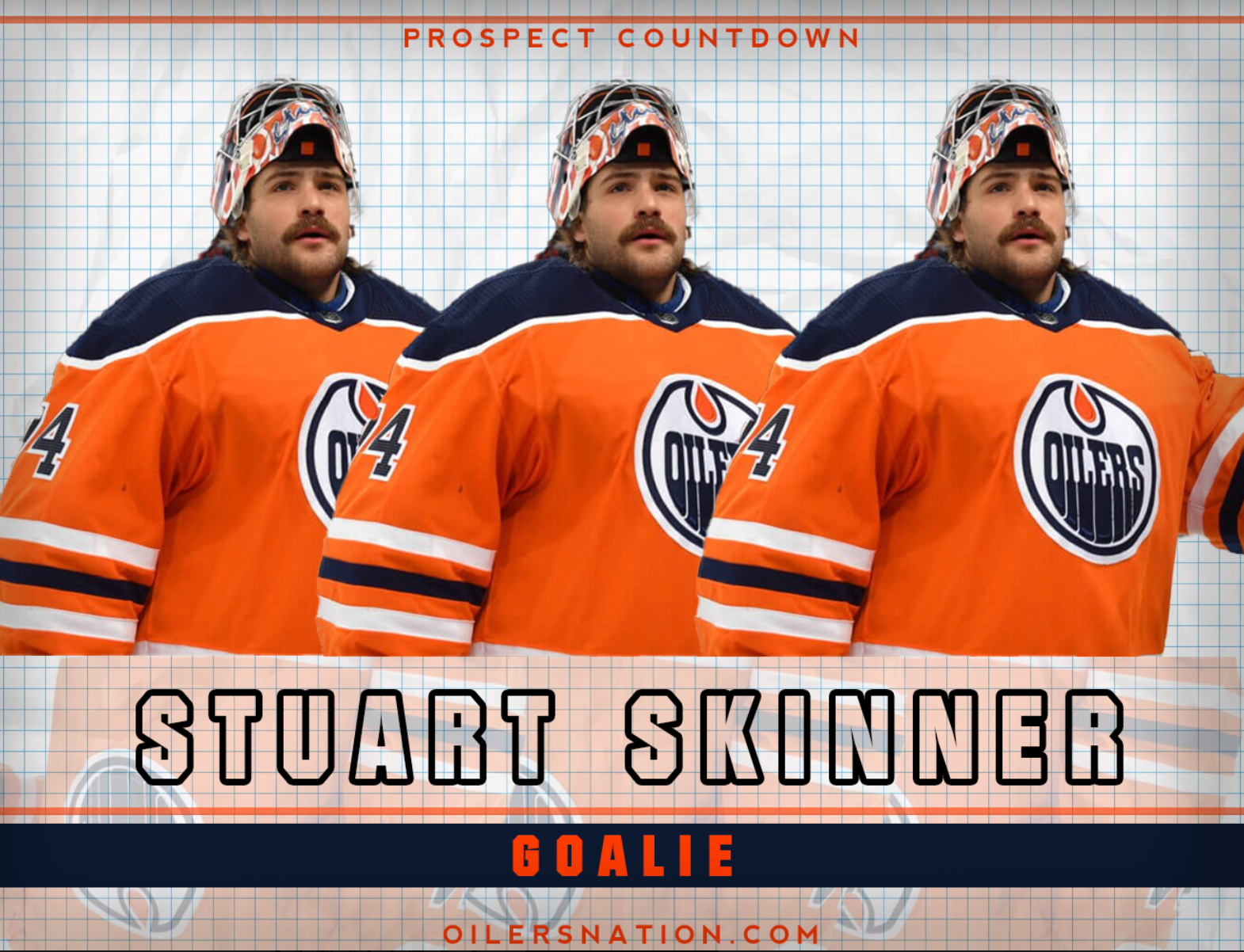 By Cam Lewis
5 months ago
It’s been quite some time since the Oilers have drafted and developed a quality NHL goaltender.
The best internally developed goaltenders in Oilers history both came in the 1980s. Grant Fuhr, selected No. 8 overall in 1982, put together a Hall of Fame career, while Andy Moog, selected No. 132 overall in 1980, had a very successful run in the league.
Since then? There are only two goaltenders drafted by the Oilers who went on to have notable careers in the NHL.
Jussi Markkanen, selected No. 133 overall in 2001, developed into a decent backup goalie, and Devan Dubnyk, selected No. 14 overall in 2004, eventually made good on his high draft pedigree after the Oilers traded him away. Otherwise, Bill Ranford, Curtis Joseph, Dwayne Roloson, and Cam Talbot were acquired through trades, and Nikolai Khabibulin, Mikko Koskinen, and Mike Smith were free agent signings.
Stuart Skinner looks like he’s going to be the one to buck the trend and become the first NHL goaltender internally produced by Edmonton’s system in years. The fact that he’s a local product who grew up cheering for the team makes Skinner’s story even better.
Following a strong season in the AHL in 2021, Skinner impressed during a 13-game cup of coffee with the Oilers last season while Mike Smith was injured. Many were calling for Skinner to take over the starter’s net last season but the Oilers ultimately opted to roll with the veteran duo of Smith and Koskinen down the stretch. This year, Skinner will have an opportunity to play a significant role with the Oilers as he forms a tandem with the newly-signed Jack Campbell. 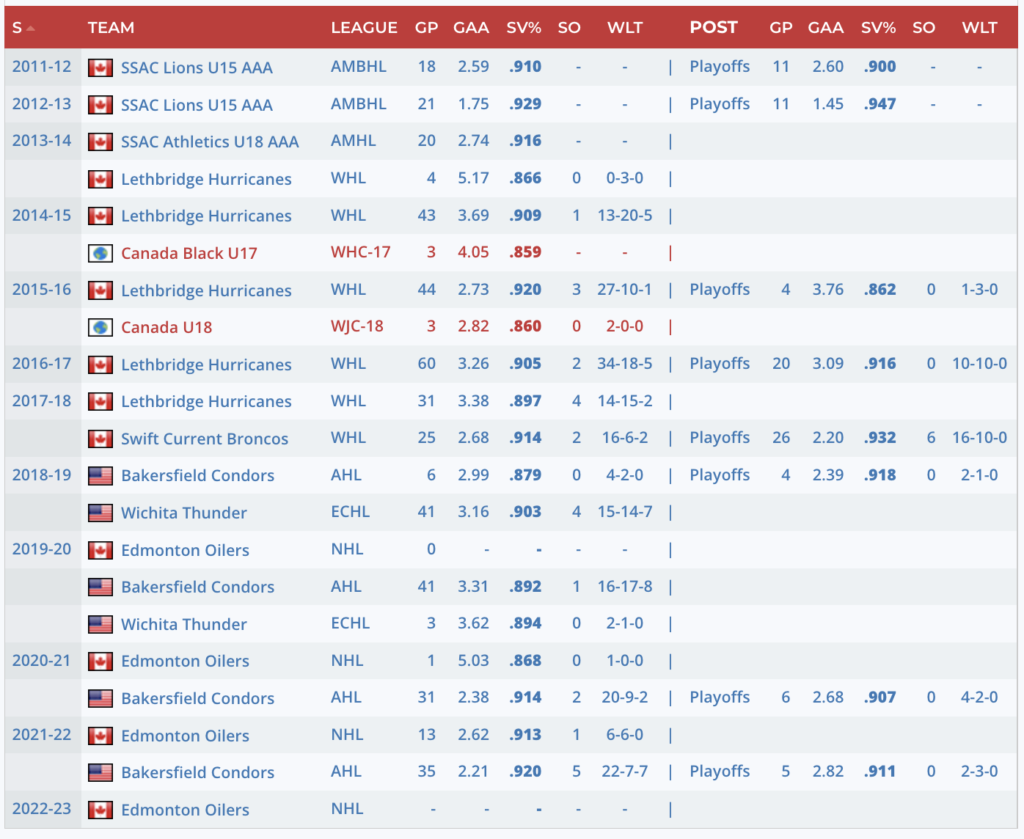 Skinner was selected by the Lethbridge Hurricanes with the No. 17 overall pick in the 2013 WHL Draft, the first goaltender taken in the class. He put up an impressive performance on a bad team as a 16-year-old rookie in 2014-15 and then broke out in his second season in 2015-16 with a .920 save percentage over 44 games.
Given his November birthday, Skinner got one more season in the WHL before he was eligible for the NHL draft. In 2016-17, Skinner had a .905 save percentage over 60 games but then had a .916 save percentage in 20 games for the Hurricanes in the playoffs. The Oilers would wind up selecting Skinner in the third round of the 2017 NHL Draft, right around where he was projected to go.
Skinner’s best run in the WHL came in 2017-18 in his post-draft season. He was traded mid-season from Lethbridge to Swift Current and he posted a sparkling .932 save percentage over 26 playoff games as the Broncos edged out Carter Hart and the Everett Silvertips for the WHL Championship.
Given his performance in the WHL, Skinner had quite a bit of hype attached to his name as he made the transition to the professional game. That hype waned as Skinner had a rough couple of seasons between the ECHL and AHL. In 2018-19, Skinner mostly played for the Wichita Thunder of the ECHL and posted a .903 save percentage in 41 games. The following season in 2019-20, Skinner played 41 games for a depleted Bakersfield Condors team and put up an .892 save percentage.
Skinner didn’t play anywhere during the first part of the 2020-21 season while hockey in North America was paused due to COVID-19. When the NHL started up in January, Skinner was Mikko Koskinen’s backup as Mike Smith was injured and third-string goalie Anton Forsberg was lost on waivers. Skinner made his NHL debut against the Ottawa Senators and picked up a win despite allowing five goals on 38 shots and was sent down to the AHL a few days later when Smith returned.
Given his two ho-hum seasons at the pro level and the fact the Oilers didn’t seem comfortable playing him in Smith’s absence, things didn’t look good for Skinner as a prospect. But, since then, things have completely turned around.
Skinner put up a strong season for the Condors in 2021, posting a .914 save percentage over 31 games. In 2021-22, Smith was again injured early in the season, but this time, Skinner didn’t just watch Koskinen from the bench. In 13 games with the Oilers last season, Skinner posted an impressive .913 save percentage. When he was returned to the AHL, he put up a .920 save percentage with the Condors.
Next up, Skinner is expected to form a tandem with Jack Campbell, who the Oilers inked to a five-year, $25 million contract over the off-season.
For Skinner, this is a prime opportunity to slowly develop into Edmonton’s goaltender of the future. Campbell has been praised for being an excellent teammate and goalie partner, making him an ideal veteran to work with Skinner. Also, Campbell’s career-high in games played in a single season is also only 49, so Skinner will be leaned on to start plenty of games in a 1B role so that Campbell doesn’t get worn down.
For reference, players who I consider to be “prospects” for this countdown are those who have played fewer than 50 NHL games and are 23 years old or younger at the start of the 2022-23 season.