By Cam Lewis
5 months ago
Perhaps the most difficult prospect in the Oilers’ system to get a read on is Raphael Lavoie.
Edmonton’s second-round pick from the 2019 NHL Draft has the entire package. He’s big, skates well, has an excellent shot, and, to boot, he plays right wing, an area in which the Oilers don’t boast a tremendous amount of depth.
Despite all of that, Lavoie’s results in the AHL have been uneven. Lavoie had a fine showing as a rookie in 2021 and then followed that up with a sophomore season that featured him weaving back and forth from being on fire to completely invisible.
This is a big season for Lavoie. A strong showing with the Condors could vault him into a call-up to the big league club, while a poor season in Bakersfield would label him as a prospect who might be lacking the ability to put his excellent set of tools to work. 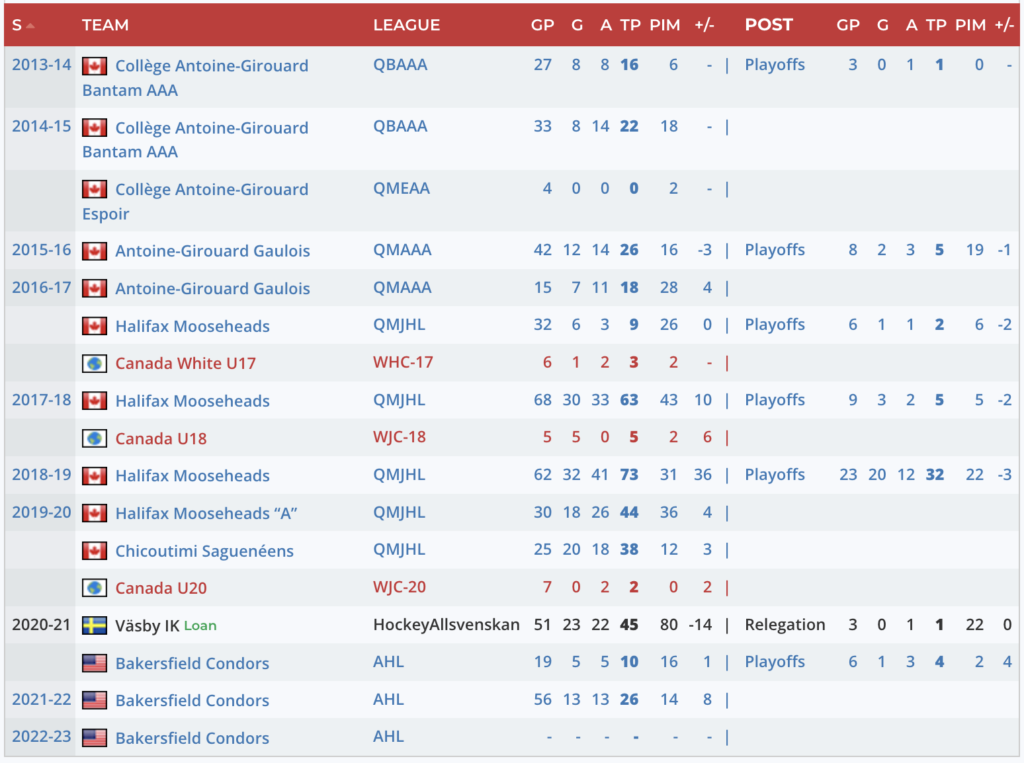 Lavoie was selected with the No. 29 overall pick in the 2016 QMJHL Draft by the Halifax Mooseheads. In his first season in the QMJHL, Lavoie scored six goals and nine points over 32 games. He followed that up with a breakout sophomore season, scoring 30 goals and 63 points in 68 games.
Given his September 25 birthday, Lavoie just missed being eligible for the 2018 NHL Draft, so his pre-draft season was his third go-around in the QMJHL. Lavoie scored 32 goals and 73 points in 62 games for the Mooseheads in 2018-19 but his breakout came in the playoffs when he scored 20 goals and 32 points over 23 games. Halifax lost in the finals to Rouyn-Noranda, who wound up also winning the Memorial Cup.
The Oilers selected Lavoie with the No. 38 overall pick in the draft that summer, a nice snag for the team considering he was projected to go in the first round by every major scouting outlet.
Lavoie’s post-draft season suggested the Oilers had done well with their second-round pick. He scored 18 goals and 44 points over 30 games with Halifax and then got traded to the Chicoutimi Saguenéens for their playoff push. With Chicoutimi, Lavoie popped off with 20 goals and 38 points over 25 games. Unfortunately, there would be no playoffs due to COVID-19.
After the 2019-20 season, The Athletic’s Scott Wheeler wrote a fascinating analysis about Lavoie, diving into his elite statistics…

Because it’s the players who create shots in large volumes and create them in high-danger areas that are truly gifted. Those players tend to be able to translate their games to the next level, too, because they do more than just beat junior-level goalies with a powerful shot from long range: they have the skills needed to take (or get) the puck to close range.
One such player is Raphael Lavoie, junior hockey’s shot creation king.

The suggestion here was that Lavoie would likely translate well to the professional game because of his physical profile (big, good skater) and because he generated shots at a better rate than just about anybody else in Major Junior.
Lavoie’s professional career began in Allsvenskan, Sweden’s second league, as North American hockey was paused because of the pandemic. He scored 23 goals and 45 points over 51 games for Vasby and then came overseas and scored five goals and 10 points in 19 regular-season games and four points in six playoff games for the Bakersfield Condors.
Given that solid performance as a rookie, the hope was that Lavoie would take a step forward and become a major contributor for the Condors in his second professional season. Lavoie was excellent at times in 2021-22 but his season also featured long dry spells in which he was off the scoresheet for weeks at a time.
Lavoie didn’t score his first goal of the 2021-22 season until December 12, his 19th game. He exploded with two goals and five points in a win over the San Diego Gulls, kicking off a stretch in which he put up 23 points over 28 games. It appeared at this time that Lavoie had arrived, but he then went without a point in his final 10 games of the season before ultimately getting shut down due to a knee injury.
Beyond the stats, Oilers assistant general manager (and Condors general manager) Keith Gretzky spoke with Jason Gregor in March and praised Lavoie for the work he had put in to improve his game at the professional level…

It’s not going to be easy, it’s not junior hockey where you just rely on your one talent of skating or shooting, whatever it is. You have to put it all together and you have to work hard. And for Raphie, I thought that he was the one guy that did a ton of extra work.

The hope for Lavoie in 2022-23 is that we can see more of the player that he was during that 28-game stretch in the middle of the season as opposed to those long cold streaks that he had to start and finish his year.
With Xavier Bourgault, Tyler Tullio, and Carter Savoie turning pro this fall, Lavoie is going to have plenty of competition on the Condors for playing time. A strong performance in the AHL could see Lavoie in the mix for a call-up to the NHL club, but a poor performance could see Lavoie jumped on the depth chart by younger wingers.
For reference, players who I consider to be “prospects” for this countdown are those who have played fewer than 50 NHL games and are 23 years old or younger at the start of the 2022-23 season.