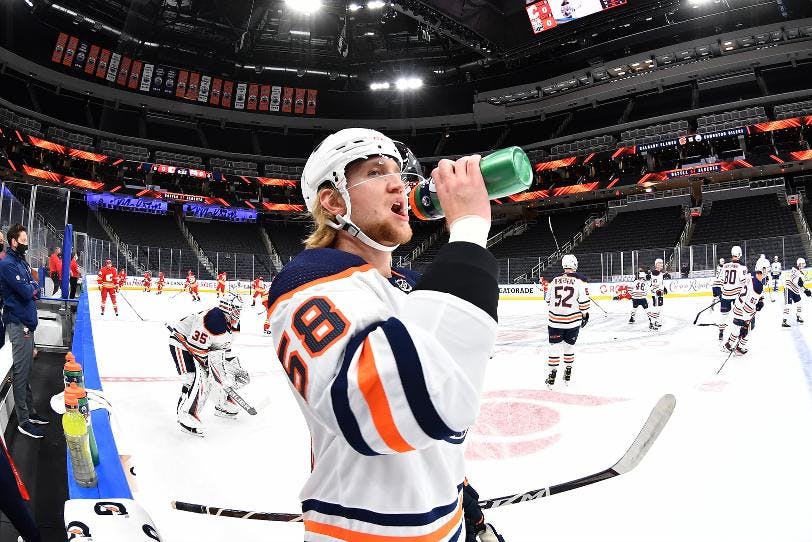 By Cam Lewis
1 year ago
As per holiday tradition, it’s time to sit back, pour a beverage, and watch the World Juniors.
With everyone in WJC mode, now is a perfect time to take a look at how the Edmonton Oilers’ prospects are doing.
Back in August and September, I profiled the Top 20 prospects in Edmonton’s system, so let’s see how they’re doing now. Earlier, I took a look at forwards, and now I’ll take a look at defencemen and goaltenders.
Also, for clarity, these aren’t new rankings. I’ll update the Top 20 again in the summer after the draft.

Summer Ranking: Not Ranked
I didn’t have Luca Munzenberger on my Top 20 list last summer, but I figured it would be worthwhile to talk about him because he’s one of the organization’s two representatives at this year’s World Juniors.
Munzenberger was a completely off-the-board selection by the Oilers at No. 90 overall last summer. He came up through Germany’s junior system and is now playing for Jay Woodcroft’s brother at the University of Vermont. Through 15 games, Munzenberger has two points and the team owns a 1-10-2 record.

Summer Ranking: No. 20
Once a forgotten prospect, Markus Niemelainen is now playing in the NHL.
The No. 63 overall pick of the Oilers from the 2016 draft played a pair of seasons in the OHL and then sort of fell off the grid after returning to Finland. The Oilers opted to sign Niemelainen to an entry-level deal back in 2020 before losing his rights and he’s proved that was a wise decision.
Through 35 games in the AHL over parts of two seasons, Niemelainen has nine points and nearly breaks even in terms of on-ice goal differential, impressive given the defensive minutes he’s played. Niemelainen earned a call-up to the big leagues when the Oilers were littered with injuries on the blueline and he didn’t look out of place in seven games.
There probably isn’t much upside beyond a bottom-pairing defender here, but Niemelainen looks like a solid depth player, which isn’t bad for someone who appeared to have fallen off the radar.

Summer Ranking: No. 17
Filip Berglund is like Niemelainen’s unofficial twin. Both of them are stay-at-home defenders who were selected in the third round of the 2016 draft and they both signed entry-level deals at around the same time in 2020 after going about their business in Europe.
Berglund is currently playing his rookie season with the Bakersfield Condors after five full seasons of playing in the Swedish Hockey League. Through 17 games, he has two assists with a minus-two rating while playing largely in a defensive role. He had a 20-point season in the SHL which suggests there’s some offence there, but we haven’t yet seen it in North America.
Niemelainen had the inside track to a call-up because he was with the Condors last season but we could see Berglund get a look with the Oilers at some point this season. This is the final year of Berglund’s two-year, entry-level contract and we’ll likely see him get a new deal as his extensive SHL resume suggests he can be a quality depth defender for an NHL club.

Summer Ranking: No. 16
Another defensive defender in the mix on the Condors is Phil Kemp, a product from Yale that the Oilers selected No. 208 overall back in 2017. Kemp has never produced much offensively but he always seemed to be highly-regarded in the United States development system, as he captained their U17 and U18 teams and played at the World Juniors.
Kemp started off his pro career in Sweden’s second league in 2020 and flashed some offence, scoring 11 points in 32 games for Vasby. That offence didn’t translate back to North America, as he has three points through 25 career AHL games. He had a plus-two rating in 2021 and he has a plus-one rating this season.
With Niemelainen and Berglund, two older players with a wealth of pro experience in Europe, ahead of him, Kemp is in tough to earn a call-up, but you can never have too much depth.

Summer Ranking: No. 15
It’s difficult to place goaltenders on prospect lists alongside players because their development takes longer and is seemingly more random. But, last summer, I had Olivier Rodrigue as the third of Edmonton’s three goalie prospects and that’s still the case now.
The Oilers were high on Rodrigue, so much so that they traded up to select him No. 62 overall at the 2018 draft. This led to a bit of an eye-roll because his father, Sylvian Rodrigue, is one of the team’s goalie coaches, but, to his credit, Rodrigue was ranked high coming into the draft and he produced good numbers in the QMJHL.
Things haven’t gone so well since he turned pro, though. In 11 games for the Condors in 2021, Rodrigue posted a 0.894 save percentage, which isn’t terrible for a rookie in the AHL. This season, he was expected to play in the ECHL, but Mike Smith’s injury led to Stuart Skinner’s call-up which has Rodrigue back in the AHL. Through nine games this season, his save percentage is 0.869.
While his performance thus far has been disappointing, there’s no reason to write Rodrigue off just yet. Skinner wasn’t good at all during his first two pro seasons and he looks like an NHL goalie now.

Summer Ranking: No. 13
Only Ryan Nugent-Hopkins, Oscar Klefbom, and Darnell Nurse have been in the Oilers organization longer than William Lagesson, who the Oilers selected No. 91 overall in 2014. He’s had a wild ride since then, playing the USHL, NCAA, World Juniors, Allsvenskan, and SHL, and he’s now an AHL-NHL tweener.
Lagesson cleared through waivers at the beginning of the season but was recalled due to a glut of injuries on Edmonton’s blueline. He’s played seven games for the Oilers this season and 34 all-told throughout his career.
He turns 26 years old in February, so calling Lagesson a prospect is a bit of a stretch at this point. He’s performed well in the SHL and AHL in the past so it’s a bit disappointing he hasn’t become anything more than a seventh or eighth defenceman for the Oilers.
Lagesson’s agent, Allan Walsh, called out Dave Tippett earlier this season over playing time, so this might be his last season with the organization. His two-year deal is up at the end of the season and the Oilers have a lot of defenders in the mix. 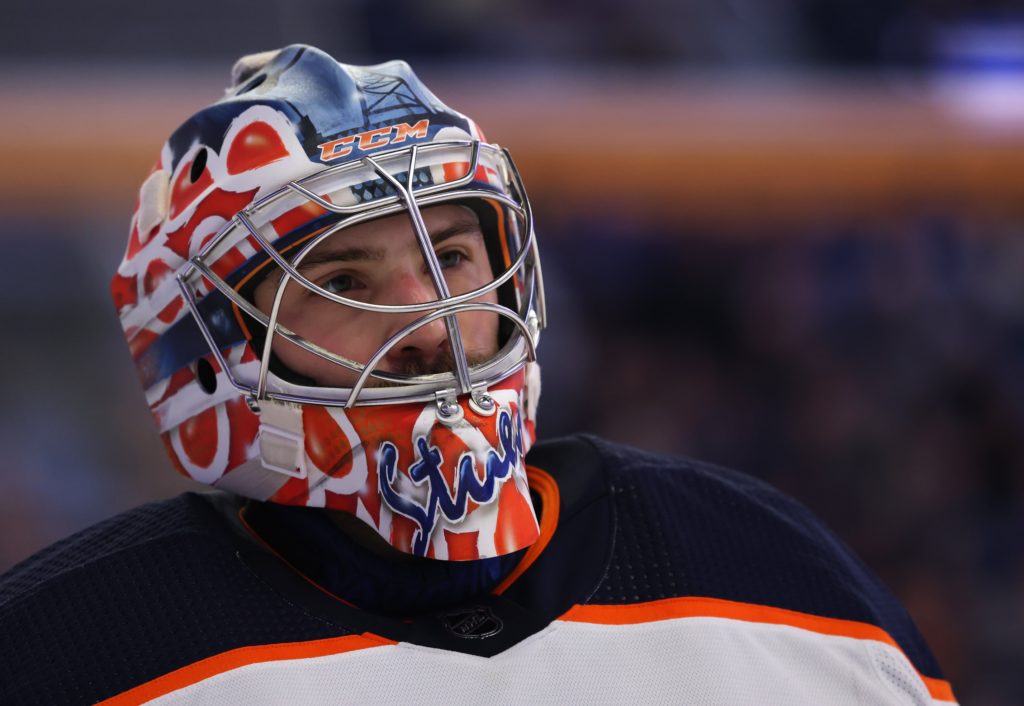 Summer Ranking: No. 10
I had Stuart Skinner ranked as the second of Edmonton’s three goalie prospects back in the summer, which looks like a misread on my part.
After a pair of ho-hum seasons at the professional level in 2018-19 and 2019-20, Skinner came into 2021 with a lot to prove. Things got off to a poor start as the Oilers couldn’t find him a gig when North American hockey was shut due to COVID-19, but Skinner wound up having a breakout season for the Condors, posting a 0.914 save percentage in 31 games.
This season, due to an injury to Mike Smith, Skinner was given a chance at the NHL level with the Oilers and he’s been very impressive thus far. Through 10 games, Skinner has a 0.916 save percentage and looks to be the more reliable option between him and Mikko Koskinen.
The Oilers have drafted and developed three legitimate NHL goalies in their history: Grant Fuhr, Andy Moog, and Devan Dubnyk, and the latter didn’t really hit his groove until he left. Skinner becoming a capable starter would be a huge win.

Summer Ranking: No. 8
While Skinner has been a great story this season, Ilya Konovalov, who I had ranked as the organization’s top goalie prospect over the summer, has been disappointing.
The reason I was high on Konovalov was due to his impressive results in the KHL. The Oilers selected him No. 85 overall in 2019 as an overeager after he posted a 0.930 save percentage in the KHL for Lokomotiv Yaroslavl. His numbers dipped a bit in 2019-20 to 0.912 but they popped back up in 2020-21 to 0.923.
So far this season, Konovalov has played in 10 games for the Condors and he has a 0.900 save percentage. It’ll take some time to adjust to North America but this isn’t the start that was expected for a player with three impressive years of KHL experience.

Summer Ranking: No. 6
Injuries have gotten in the way of Dmitri Samorukov’s career lately.
He was having an excellent season in the KHL for CSKA Moscow but that was derailed due to a shoulder injury. This fall, Samorukov came into Oilers camp with aspirations of competing for an NHL gig, but a broken jaw early in the pre-season got in the way of that.
Samorukov is back and playing for the Condors, where he has three points and a minus-five rating over 15 games. It’ll take him some time to get back up to speed, especially given the fact he hadn’t played in North American since the 2019-20 season.
Though it seems like he’s still very young, Samorukov’s entry-level deal expires at the end of the season and he’s waiver-eligible next year. The Oilers will surely give him a cup of coffee at some point this season. He’s the big, physical, and intimidating defender the team badly needs now that Adam Larsson is gone.

Summer Ranking: No. 3
One of this year’s biggest surprises was Philip Broberg coming in and playing so well in his AHL debut that he forced his way into an NHL call-up. Most suspected that the No. 8 overall pick from the 2019 draft would spend most if not all of the 2021-22 season with the Condors but Broberg was one of the first reinforcements up from Bakersfield.
In 15 AHL games, Broberg impressed at both ends of the ice, scoring 11 points with a plus-four rating. He had just one assist in his eight NHL games but Broberg’s underlying numbers were very impressive for a rookie, as he has a 106-to-95 shot attempt differential over 116 even-strength minutes.
The obvious comparable for Broberg is Oscar Klefbom because they’re both Swedes who were brought along at a similar pace. Like Broberg, Klefbom played his first two post-draft seasons in Sweden and then came over to the AHL and earned his first NHL call-up in his first season in North America. So far, Broberg is trending better than Klefbom did at each level.

Summer Ranking: No. 1
Evan Bouchard played his 50th NHL game last week and is no longer a prospect.
He has 18 points in 29 games for the Oilers this season and is logging 21:28 per game. Bouchard is already clearly a top-four defender and you can argue that he’s a legitimate top-pairing defender at the age of 22.
There are still some holes in his game, specifically in the defensive zone, but Bouchard is becoming exactly what we all hoped he would when the Oilers selected him No. 10 overall at the 2018 draft. It took some time, but Bouchard has been worth the wait.
Uncategorized
Recent articles from Cam Lewis