By Cam Lewis
1 year ago
Markus Niemelainen has put himself on the map among Oilers’ prospects over the past year.
Originally selected in the third round of the 2016 draft, Niemelainen didn’t ink a contract with the Oilers until shortly before the organization was set to lose his rights. On April 30 of 2020, the Oilers and Niemelainen agreed to a two-year entry-level deal.
This signing wasn’t met with all too much fanfare. After getting drafted, Niemelainen was pretty much out of sight for Oilers fans. He scored just nine points in 65 games in his post-draft season in the OHL and didn’t crack Finland’s World Junior roster. After that, he returned to Finland to play professionally and sort of faded into the background.
His rookie season with the Bakersfield Condors in 2021 has completely changed that perception. Niemelainen has gone from a forgotten draft pick overseas to a legitimate contender to earn a call-up to the big league squad in 2021-22. 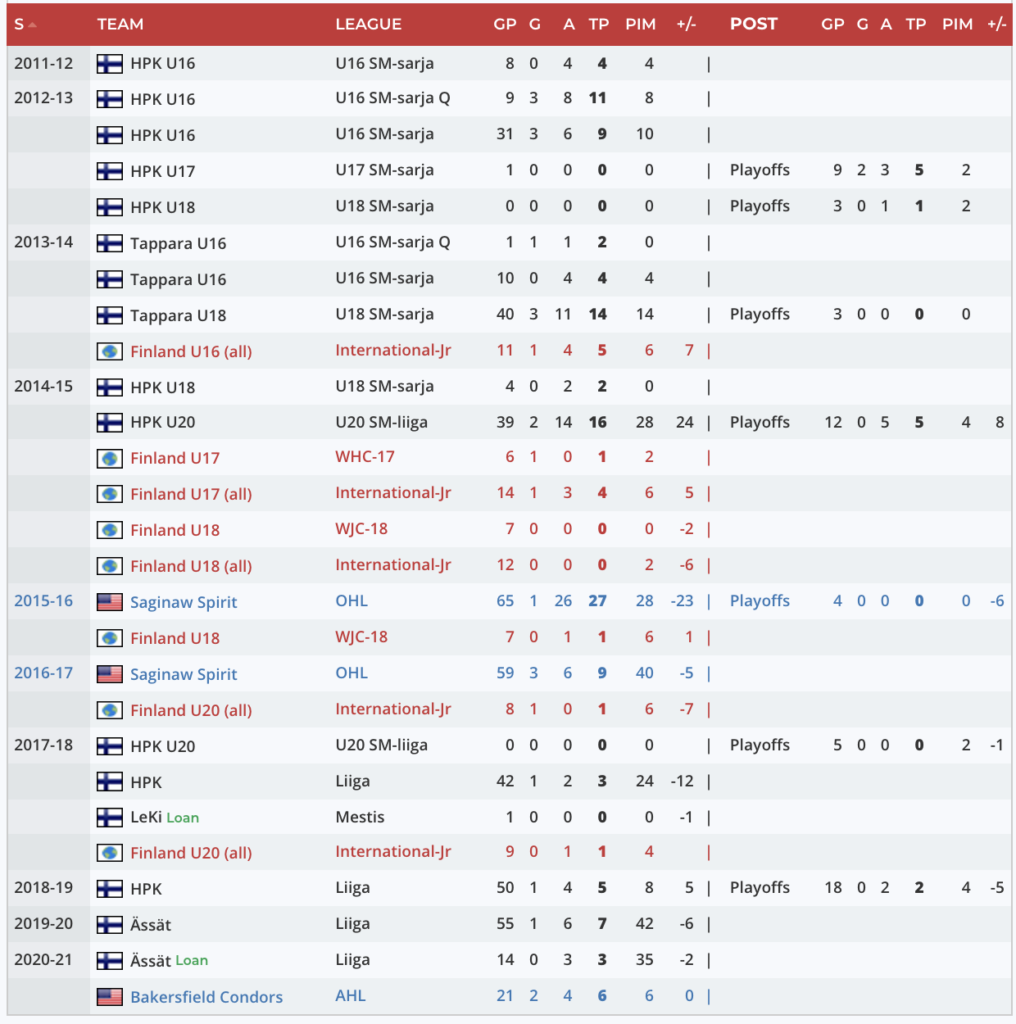 Niemelainen has always had an ideal skillset for a defender, boasting a 6’5″ frame with a smooth stride and strong skating ability. Here’s what was said about Niemelainen in his draft year in 2016…

“A complete all-around defenceman that makes the game look easy. Natural size and strength compliment his smooth stride. Very mobile skater who moves up and down the ice quickly, with acute recognition of puck and body position. His maturity and poise is actualized in his high-percentage decision-making, with and without the puck, as well as his proactive stick and body play. Very stable defensively and always takes his lane, but is quick to rush the puck up the ice as he recognizes and accounts for how much time his team is spending in their own end. All-in-all, a quick-thinking defenceman that, honestly lacking nothing, has the potential to develop into a reliable two-way defenceman.” (Curtis Joe, EliteProspects)

But, as I said earlier, a mediocre post-draft season in the OHL coupled with not making Finland’s World Junior squad put pause on any immediate hype surrounding Niemelainen as a prospect. His first two seasons playing professionally in Finland didn’t help much either, as Niemelainen scored just three and five points in 2017-18 and 2018-19 while playing in a bottom-pairing role for HPK.
In 2019-20, Niemelainen moved to Assat and took on a much bigger role, leading the team in average ice-time per game. The Oilers liked what they saw enough to ink him to an entry-level deal and he proved that was the right choice with a strong debut season in AHL Bakersfield.
After playing 14 games with Assat, Niemelainen came overseas and played 21 games for the Condors, scoring two goals and six points with a plus-six rating. His 17-to-17 on-ice goal differential ranked third on the Condors among defenders, behind Phil Kemp (6-to-4 in 12 games) and Theodor Lennstrom (18-to-12 in 19 games).
Here’s what Condors’ play-by-play guy Ryan Holt said about Niemelianen on Lowetide’s show on TSN1260 back in March…

“Markus Niemelainen has really been an unheralded story this season. He’s fantastic in his own end, he can skate like the wind for a big man, he’s chipped in offensively which is a bonus for his game… He’s a guy who has come in and really opened some eyes. His skating is really exceptional, I think, and defensively he’s been rock steady back there. He’s learning from guys like Gravel and Stanton who have been around the game for a long time, especially what it takes to get to the next level, I think it’s going to benefit him… I think Niemelainen has a chance, I don’t know if it comes this year or into next year, but he’s on that cusp. He’s a solid defenceman who’s going to grow here in the American Hockey League, and you can put him in the William Lagesson bucket if you will.”

Niemelainen has never produced much offence at any level, either in junior or as a professional, so the upside here is realistically a bottom-pairing shutdown defender at the NHL level. Given his physical package, a large body with strong skating ability, and his stable, physical style of play, he could thrive in that role.
As of right now, the Oilers have Darnell Nurse, Duncan Keith, Kris Russell, William Lagesson, Tyson Barrie, Cody Ceci, and Evan Bouchard pencilled in as their seven defenders on the big league club. In the event of an injury, Niemelainen’s name will be in the mix for a call-up, along with Dmitri Samorukov, Filip Berglund, and Philip Broberg.
Niemelainen has the most professional experience of those three names, so a strong showing at the AHL level next year could certainly earn him a cup of coffee with the Oilers. That’s quite the swing for a prospect who most of us had forgotten about a little over a year ago.
For reference, players who I consider to be “prospects” for this countdown are skaters who have played fewer than 50 NHL games and goaltenders who have played fewer than 25 NHL games. I’m basing the rankings on a combination of upside and the likelihood of reaching that potential.
Nation Takes
Oilers Talk
Recent articles from Cam Lewis