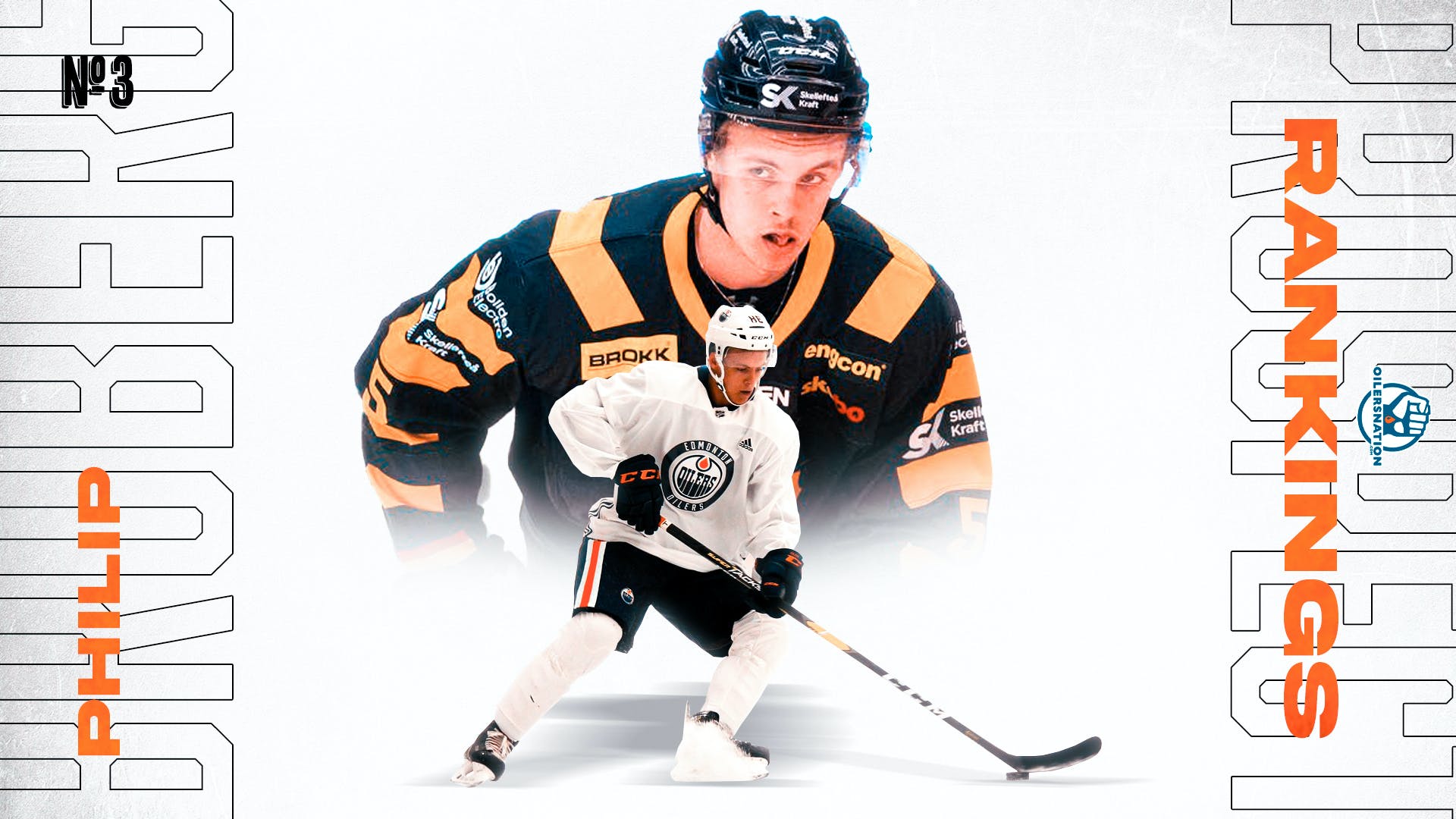 By Cam Lewis
1 year ago
Last summer, Philip Broberg came overseas and dazzled at the Oilers’ pre-playoff training camp. His performance was good enough to have him join the team in the bubble and even led to some speculation that he could suit up and make his NHL debut in the playoffs.

“You can’t walk away from a scrimmage saying that he doesn’t fit (in the NHL),” Dave Tippett said about the team’s first-round pick from the 2019 draft last July. “If anything, you walk away saying he does fit.”
“He looks to me like a player right now that you can put on left D, right D, right wing, left wing, centre. He’s a young player that’s trying to come in and make an impression, and he’s certainly doing that.”

Broberg, of course, didn’t end up playing for the team during their play-in series against the Chicago Blackhawks, but this showing added hype to a prospect who many observers were skeptical of when the Oilers selected him with the No. 8 overall pick over the likes of @Trevor Zegras and @Cole Caufield.
After that, expectations were sky-high for Broberg heading into his draft-plus-two season, which was his second go-around at the SHL level. Broberg started the season very well but things went sideways for him in the second half after he played through a pair of injuries while representing Sweden at the World Juniors.
Broberg will travel overseas to make his North American debut this fall. What can we expect from him this year? Will he follow in fellow Swedish defender Oscar Klefbom’s footsteps and earn a call-up to the Oilers during his first season in North America? 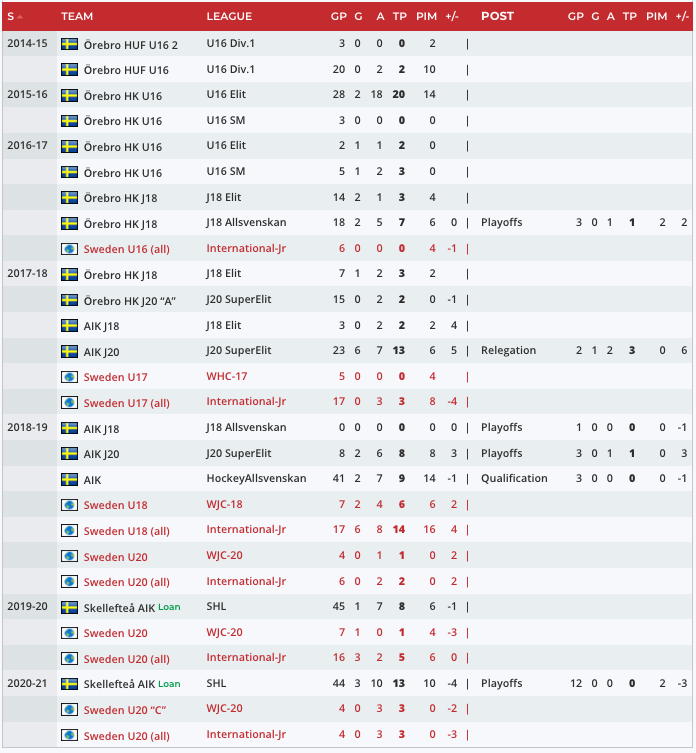 Broberg has all of the tools to become a top-pairing defender at the NHL level. He’s a gifted two-way player with excellent skating ability, he has size and reach, standing at 6’3″, and he boasts a strong hockey sense, especially when it comes to moving the puck up ice in transition. The weaknesses described around Broberg’s game is that a lack of offence will keep him from being a true No. 1, but this is still a very promising package.
In Broberg’s first SHL season in 2019-20 with Skellefta, he played in 45 games and scored one goal and eight points. This doesn’t seem all too impressive at a glance, but it’s important to remember to look at stats from Euro leagues differently, as Broberg played largely a defensive role and wasn’t expected to contribute offensively. Looking at some underlying numbers, Broberg logged 13:19 per game for Skellefta at even-strength and put up a 23-to-23 on-ice goal differential, impressive stuff for an 18-year-old playing in one of the better pro leagues in the world.
For the sake of comparison, Oscar Klefbom, drafted No. 21 overall by the Oilers in 2011, played in 33 games in Sweden’s top league in his post-draft season and recorded two points. He also played 15 games in Sweden’s U20 league that season.
Given his rookie season and his impressive showing in the bubble, Broberg’s Sophomore SHL season was a bit of a disappointment. This was especially the case when the SHL playoffs rolled around and Broberg was only logging around 11 minutes per night for Skellefta.
That said, there was a decent amount to like about Broberg’s season, and it’s important to keep in mind his limited ice time was due largely to nagging injuries. Broberg was a key defender for Skellefta early on, logging nearly 20 minutes per game in the first dozen games of the season.
Broberg was named Sweden’s captain at the World Juniors and the hope was that he could be the top defender in the tournament. He wound up playing in just four games and it was revealed afterwards that Broberg skated through two injuries in the medal round, a tear above the knee and partial shoulder separation.
Back in January, Ken Holland spoke with Bob Stauffer of Oilers Now about Broberg’s play at the WJC and said that he was impressed with the grit the young defender showed…

“I liked it that he dug in. He was the captain. He wanted to play… We knew he was playing hurt. I like that trait. You can’t be 100 per cent all the time. You got to dig in.”

Broberg’s usage and performance tailed off after the tournament, as he logged third-pairing minutes for Skellefta the rest of the way and was used as the team’s seventh defender in the playoffs. Still, all told, Broberg played in 44 games in the SHL in 2020-21, scoring three goals and 13 points while logging an average of 14:26 per game at even strength with a 22-to-26 on-ice goal differential.
It wasn’t the breakout season many had hoped for, but, still, all things considered, it was from a disaster. Sticking with the same comparison as before, Klefbom’s draft-plus-two year featured an excellent showing at the WJC and an injury-riddled SHL season in which he scored three points in 11 games. Klefbom then came overseas in 2013-14 and made both his AHL and NHL debut.
The difference for Broberg is that Klefbom came overseas to join an Oilers organization whose blueline was a barren wasteland. There was virtually nobody in front of him stopping him from breaking into the NHL and the Oilers were fine with giving him an extended cup of coffee.
Broberg arrives in North America with a much stronger big league roster in front of him and some other quality defence prospects in the mix in Bakersfield. Edmonton’s blueline will feature Darnell Nurse, Duncan Keith, Kris Russell, and perhaps William Lagesson on the left side while Markus Niemelainen and Dmitri Samorukov, two older prospects, will be in the AHL vying for a call-up.
Defenders take some time to develop and the Oilers are in a situation where there’s no need to do anything with Broberg other than take it slowly. Him spending the entire 2021-22 with the Condors wouldn’t at all be a problem, but there’s also no saying he can’t put himself into the conversation for a call-up with a strong AHL performance.
For reference, players who I consider to be “prospects” for this countdown are skaters who have played fewer than 50 NHL games and goaltenders who have played fewer than 25 NHL games. I’m basing the rankings on a combination of upside and the likelihood of reaching that potential.