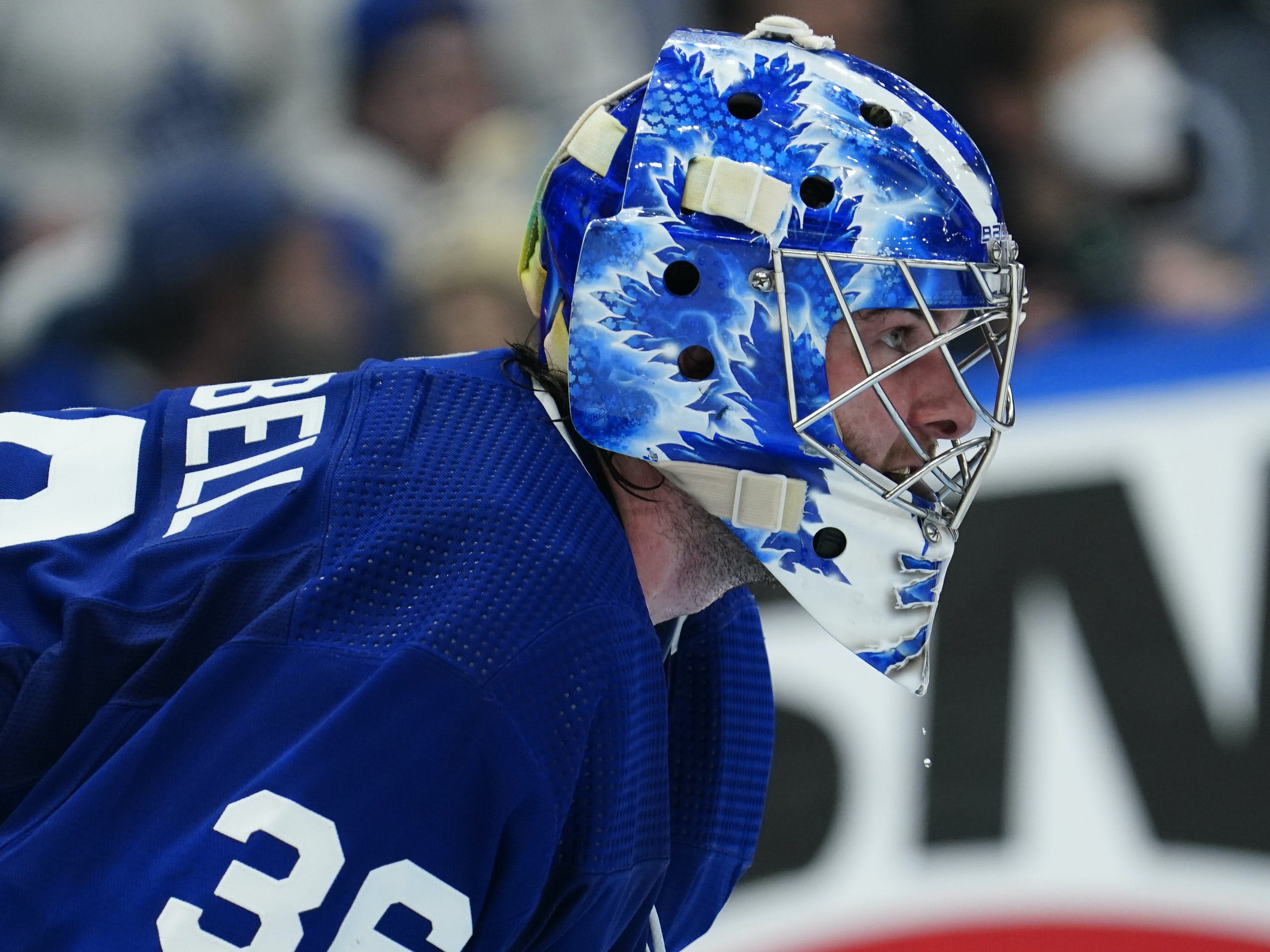 By Zach Laing
4 months ago
Welcome to the 2022 Edmonton Oilers — or, at least as I see it.
We’re just under 24 hours away from the free-agent period , so last night I sat down with CapFriendly’s Armchair GM mode in front of me and had some fun with it.
Here’s my roster, and below will be all the moves and the reasoning for it. 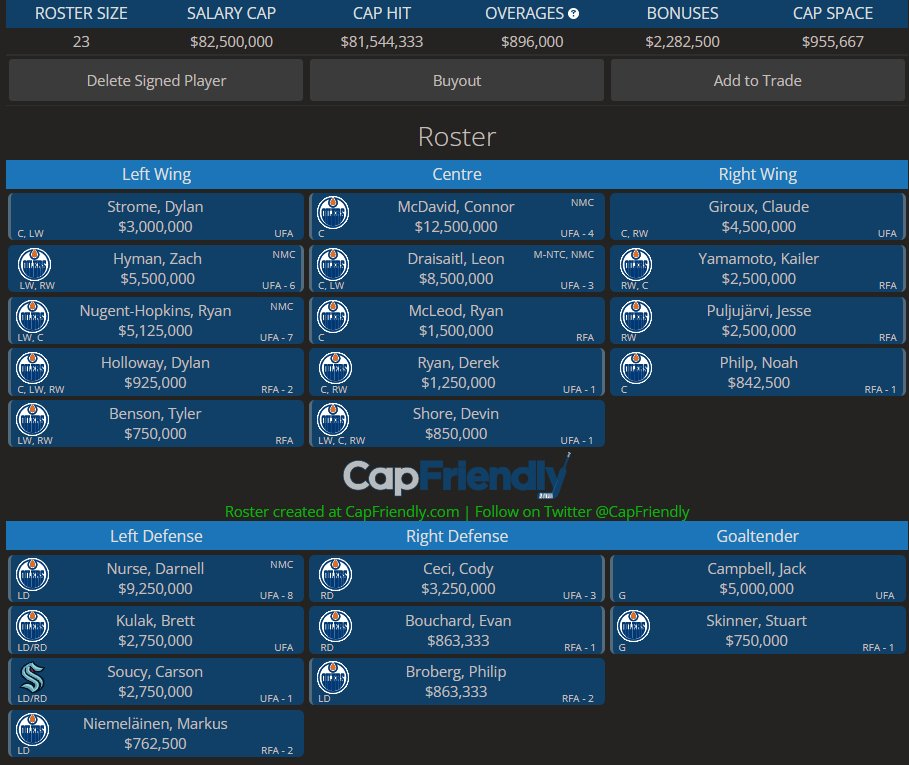 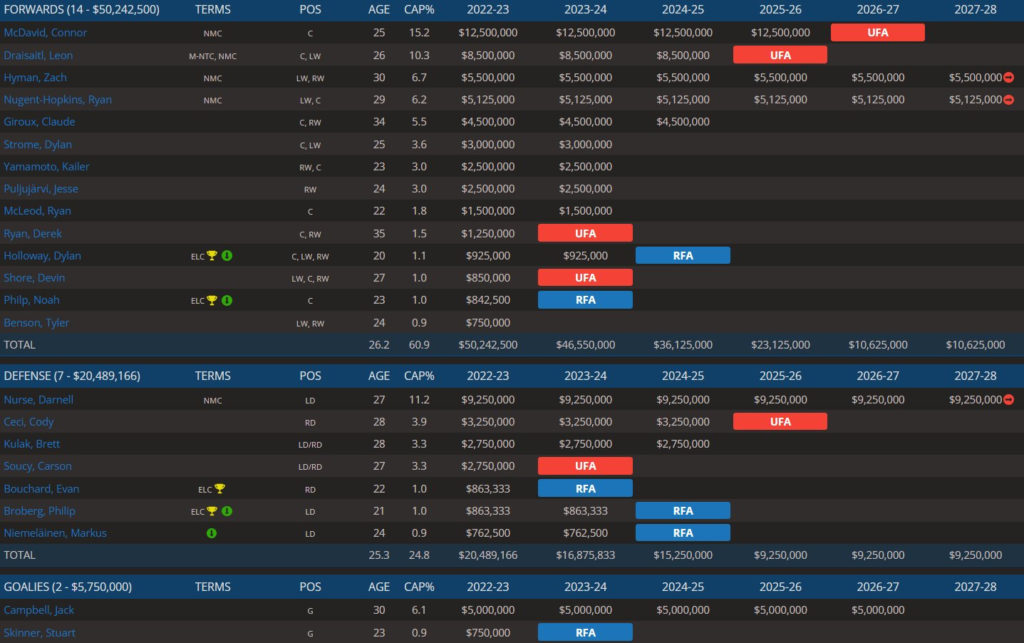 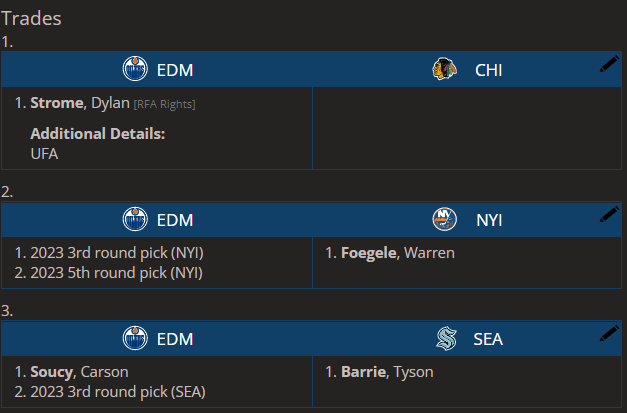 There are a few deals I made. First and foremost the Oilers flipped Tyson Barrie to the Seattle Kraken for Carson Soucy and a pick. A big, left-shot, defence first player comes back to the Oilers to solidify the backend. The Viking, Alta. native had a good, not great first year with the Kraken, and has been an honourable mention on Daily Faceoff’s Trade Bait board.
Seattle needs offence from the back end and the Oilers need some jam so it’s a deal that makes sense for both organizations. I’ve written about this before, but I’m really uncomfortable thinking about Philip Broberg and Tyson Barrie on the third pairing together. The Oilers are best served to get a cheaper defenceman.
Warren Foegele got dealt to the New York Islanders for two draft picks. This was a tough one and was one of the last moves I made in building out this roster. The biggest thing was that I needed some extra cap space to sign Claude Giroux, and Foegele fit the bill. In the real world, I do hope he’s back next season, but in this scenario, we’re moving him for a few picks.

I got deals done with each of Ryan McLeod, Jesse Puljujarvi and Kailer Yamamoto signing them all to two-year deals. $1.5-million per for McLeod, while Puljujarvi and Yamamoto each got $2.5-million AAV deals.
Brett Kulak also comes back on a three-year deal paying him $2.75-million. This is a key signing this offseason, and one the Oilers need to make happen. He’s in the Cody Ceci range for a new deal.
The big moves came in the free-agent market. Jack Campbell inks for five years at $5-million AAV, while Dylan Strome joins former Erie Otters teammate Connor McDavid on the top line. He got a two-year deal worth $3-million per.
Claude Giroux also joined the Oilers on a three-year deal paying him an AAV of $4.5-million. Giroux leaves some money on the table in exchange for term with the Oilers as he looks to win a cup.

As it stands, I have Strome and Giroux penciled in as linemates for Connor McDavid. On the second line, we’re rolling with Zach Hyman, Leon Draisaitl and Kailer Yamamoto. On the third, Ryan Nugent-Hopkins, Ryan McLeod and Jesse Puljujarvi.
Now, the fourth line could get a little tricky. Dylan Holloway will be with the big club, and a good camp could land Noah Philp NHL minutes. A reminder: Edmonton signed Philp to a one-year entry level deal. It’s hard not to think they’re going to want to see what they’ve got in him. He has a very high hockey IQ and an NHL release on his shot already.
The Oilers would obviously be punting a few things down the road here in terms of contracts with McLeod, Puljujarvi and Yamamoto, but the Oilers need flexibility in their cap now if they want to compete for a cup in that time. All three are going to be key pieces for the Oilers here and Edmonton needs to find a way to keep their salaries low. That’s also why I have Philp on my opening day roster.
The extra forwards can be a toss up. I expect Devin Shore, who had a nice back half of the year under Jay Woodcroft, to be the Oilers 13th forward. Can Tyler Benson stick around as number 14, or does the team need to look for another body to fill in?
One player I’d be interested in there is Johan Larsson. 29-year-old depth center/winger who scored 21 points in 43 games between the Arizona Coyotes and Washington Capitals this year. Strong underlying numbers, too. I believe he was on the Oilers radar at the trade deadline, so it wouldn’t surprise me to see them circle back on it in free agency.
Where could I go wrong? Well, the Dylan Strome deal could be a bit of a crapshoot. It’s hard to get a feel for him but I’m comfortable taking that risk. He scored 17 5×5 goals last year which would’ve been fourth on the Oilers behind Zach Hyman (19), Connor McDavid (22) and Leon Draisaitl (26).
Jesse Puljujarvi could always get traded, too, but the more I think about it, the more I find the Oilers hard pressed to get what they want. They’re not going to give him away, and if they were going to trade him for draft picks it would already have been done.
Could there be somehting out of left field? Of course. This is a wild time of year and the Oilers are showing more and more willingness to get creative. Let’s see what Holland and co. cook up this week.
Zach Laing is the Nation Network’s news director and senior columnist. He can be followed on Twitter at @zjlaing, or reached by email at zach@oilersnation.com.