Questions for Quinn: Hit the road! 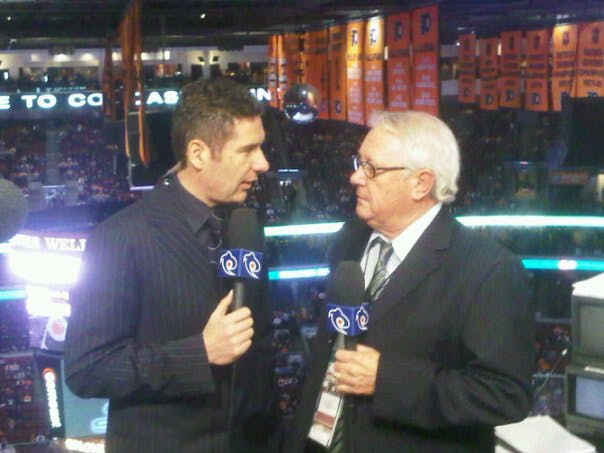 By Quinn Phillips
1 year ago
What is your favourite road arena in the NHL?
Despite being a relatively (very) spoiled child who grew up in the Oilers organization, I haven’t actually been on that many road trips. But with that said, it’s not lost on me the trips I have been on, I was entrenched with the team and that’s incredibly lucky. Let me say, though, one time my brother got to fly to Vancouver with the team and Cujo had him hold his helmet before warm-up to make sure no Canucks fans did anything to it. That’s not something I ever got to do. and when you mix in the fact he got Devan Dubnyk’s jersey after my dad’s last game, I’m starting to build some delayed resentment. Gonna have to work through this with a professional, I think.
There isn’t necessarily a rink that stands out to me aesthetically (except of course Madison Square Garden but I’ve never been to a game there), but I’ve had two really interesting experiences at two rinks that always stand out to me and make it very special.
The first came when I was just 14-years-old, I went to New York City with my mom and then we met up with the Oilers in Boston. It was the first year that the Bruins played in their new building, which was called FleetCenter at the time. So first off, it was pretty funny going to morning skate with them because the players, my dad, and I got lost after the team bus dropped us off. I was walking with Ryan Smyth through the bowels of the building and I remember him being so fun to chat with as we walked around in circles looking for the visitor dressing room. The building was brand new, so I remember it being huge and modern at the time. The seats were so bright. But what stands out was that it was shortly after Bill Ranford was traded to the Bruins for Mariusz Czerkawski and this was the first game the two had played against their old teams. This was a bit of a storybook ending because Czerkawski scored the overtime winner on Ranford… and believe it or not, the Bruins fans cheered for their former player. I just thought it was so impressive and it always stood out to me and is such a fond memory 26 years later.
Boston also has a special place in my heart because it was always one of my dad’s favourite stops and he talked about it a lot. Nashville ended up high on the list later in his career.
The second one that stands out was in Philadelphia. My brother and I flew to Philly to surprise my dad for his last road game in 2011… it was as fun as you can possibly imagine. We stayed at the Four Seasons with the team, took the bus to morning skate with the team (shoutout Ryan Jones for getting on the bus and honking the bus’ horn which made my brother and I laugh so hard), and then got tickets to the game to face the Philly fans. They make it quite the experience because they really are terrifying. It started with a guy trying to get people signed up for a Flyers credit card and I gently said ‘go Oilers’ only to hear back “F$*k off!”… from an employee at the rink. Geez. I should’ve learned my lesson, but my brother and I promised that when the Oilers scored a goal we were going to jump up and cheer (despite the fact my dad told me to behave and respect the fact that Philly fans are MEAN). Well, the Oilers only scored one, down 3-0, but I jumped up and roared with a cheer, only to look to my left and see my brother still sitting. Oh cool, thanks bro, leaving me to hang out to dry. But then I look down a row to my right and there’s another Oilers fan cheering, so I decide I’m going to lean across the angry Philly fans to high five the Oilers fans. That’s when the yells started: “sit the f^*k down!” I didn’t listen. I have an attitude problem when I’m in enemy territory. Good thing I never went to an NFL game in Oakland.
Other places I’ve seen: I was working with Global and covered games five and seven in Anaheim in 2017… the rink is freezing cold and obviously I have sour memories from that one. LET’S NOT GET INTO IT, YOU KNOW WHAT I’M TALKING ABOUT. I’ve been to the Saddledome, it’s terrible and outdated, but we all knew that. Watched the Oilers play at Gila River in Phoenix on a number of occasions and I love the area it’s in! Last but not least, of course, the Hockey Hall of Fame games in Toronto for both my dad’s induction and Jim Matheson, which was obviously a very cool experience and I even met Mike Myers because he came into our suite to meet Grant Fuhr who went in the same year as my dad (2003). Scotiabank Arena is obviously very nice from getting to stay in a suite perspective, I’ve never sat in the seats and never seen Edmonton play there which clearly changes the experience.
That was a fun trip down memory lane. What else do you Oilersnation fans want to know?
Nation Takes
Oilers Talk
Recent articles from Quinn Phillips