Should the Oilers Trade the 19th Overall Pick? 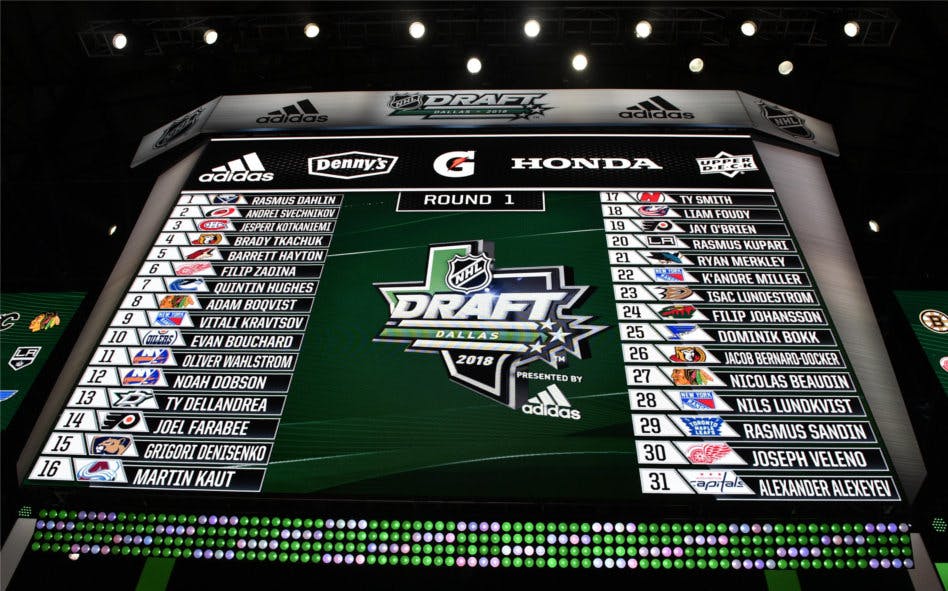 By Tyler Yaremchuk
1 year ago
As things stand right now, the Oilers will only select twice in the first five rounds of the upcoming NHL Draft. Just considering that fact alone, the idea of trading one of those two picks may sound incredibly foolish. But is it really?
The Oilers desperately need to take a step forward next season and prove that they aren’t just a playoff team, but a legitimate Stanley Cup contender. At the very least, they need to show that they’re capable of winning a playoff series. To do that, they’ll need to make some serious additions in the next few weeks.
One of the best times to make a deal is at the Draft and the Oilers hold a fairly valuable trade chip with the 19th overall pick. Yes, that player could one day become a bonafide top-six scoring winger, but if the Oilers could trade that pick for a player who is currently a bonafide top-six scoring winger, then why wouldn’t they?
Before I get into that, here is the last ten years of picks in the 18-20 range.
There are a handful of really good players who have gone in this range, but also a solid amount of misses. Trading a pick in this range is not a terrible idea, it just obviously has to be a good deal that significantly improves the roster for next season.
Considering how difficult scouting in a pandemic year was, I think the Oilers should be even more open to moving the 19th overall selection. Things could be more random than ever this season and in a lot of ways, the prospects being taken in this year’s draft are less of a sure thing than in past years. There just weren’t as many opportunities to see these kids play.
Now, what I will say is that trading down would be the best way to go about this. If the Oilers can move down 10-20 spots, they could get the best of both worlds. They would still add a solid prospect to their system and could potentially add a solid piece that will help them win games next season. In a year where the drafting process is probably more random than ever, there is a good chance that you still add a good prospect later in the draft.
Now, trading down is rare to do because finding a dance partner can be tough. There are some interesting candidates though.
Considering the fact that the Arizona Coyotes had to forfeit their first-round pick, they might be interested in moving up and they have a few players that I would be interested in (Connor Garland, Christian Dvorak, Darcy Kuemper to name a few). They also own the 37th and 43rd selections in the draft. There could be a fit here.
The Columbus Blue Jackets are heading into a bit of a re-tooling process and hold both the 25th and 32nd picks in the Draft. Boone Jenner and Max Domi (if he’s healthy) would interest me if I was the Oilers.
The Red Wings are a rebuilding team that pick after the Oilers at 23rd and 28th overall. They’re worth keeping an eye on. There’s also the Seattle Kraken, who pick at 35th overall and might have some interesting names on the trading block after the expansion draft.
Obviously, I’m not projecting any deals here because they would likely be pretty complicated moves with multiple pieces, but trading down would be a very smart move by Ken Holland and the Oilers.
Just outright trading the pick wouldn’t be the worst decision either. If the Oilers don’t believe that there is a player in their range that can realistically be a contributing top-six or top-nine forward in the next few seasons, then why not call around and see if you can acquire a player who can jump right into the lineup and contribute? Again, they need to make next year’s team as complete and competitive as possible. Adding a legit scoring winger for the top six would go a long way in accomplishing that.
I won’t go too in-depth on potential targets but there a handful of names reportedly on the trading block that would interest me. Pavel Buchnevich, Sam Reinhart, Rickard Rakkell, and Vladamir Tarasenko (money retained) would all be really good fits in the Oilers’ top-six in my opinion and any package might have to involve the 19th overall pick (with other pieces going either way to even out the trade). Jake DeBrusk should also be of interest, but the cost should be less than the players I listed.
Trying to predict and project things like this can often be a crapshoot, but I really do think Ken Holland and the Oilers front office would be wise to explore the idea of trading the 19th overall pick for some immediate help.
Players like Bouchard, Bear, Broberg, and Samorukov have me feeling confident in the future of the blueline and with the likes of Yamamoto, McLeod, and Puljujarvi already on the roster and Holloway, Lavoie and others in the system to help out up front, I think the Oilers can afford to take a chance on moving their first-round pick for someone who can help the team win next season. The fit just has to be right.
Nation Takes
Oilers Talk
Recent articles from Tyler Yaremchuk