One game I would’ve loved to have attended was Sam Gagner’s eight-point night! Unfortunately, I missed parts of this game even on TV as I was just walking out of a movie theater, checking my phone and seeing that Sam Gagner is putting on a clinic against the Chicago Blackhawks. From what I recall this wasn’t a very meaningful game for the Oilers. One of those performances that came out of the blue. As someone who attended Smyth’s final game! I remember the entire crowd cheering for Smytty to score every time he stepped on the ice, playing a total of 23:06 in his final game. And then the waterworks began to flow around Rexall Place as soon as the final whistle blew, an emotional night for Ryan Smyth, his family, and all Oilers fans in attendance.
We have a game from all the way back in 1983! Imagine attending your first-ever Oilers game and the final score was 13-4! Might feel like you just attended a baseball game if anything! To think the Devils were even in that game by putting up two early goals.
March 28th, 2017 will be a day I remember forever. The night the Oilers finally clinched a playoff spot for the first time in a decade. I was fortunate enough to be in attendance for this one as well. Easily my Top 5 Oilers game I’ve seen live. More so for how momentous that occasion was. The worst part?! How the officials kept delaying the final seconds of that game because of a faceoff problem? Nonetheless, I remember the jubilation from Oilers fans, it felt like a massive weight had been lifted off our shoulders. The Decade of Darkness was over.

November 5th, 2021. Not only was it Kevin Lowe’s jersey retirement. Connor McDavid arguably scored the best goal of his career, taking on four Rangers defencemen. We all know the story, the goal! It’s played on repeat in the minds of Oilers fans everywhere. Now to have that happen in the game you first attended?! Please go buy a lottery ticket. Not only was the goal out of this world, but the comeback was also even sweeter against the New York Rangers!

Another blast from the past! Gretzky’s legendary 50-in-39 game against the Flyers. To experience this as a seven-year-old kid? I wonder if that set your expectations of what Oilers hockey should be! That night looked like pure joy. Wayne Gretzky setting a record that will never be broken? It doesn’t get better than that. 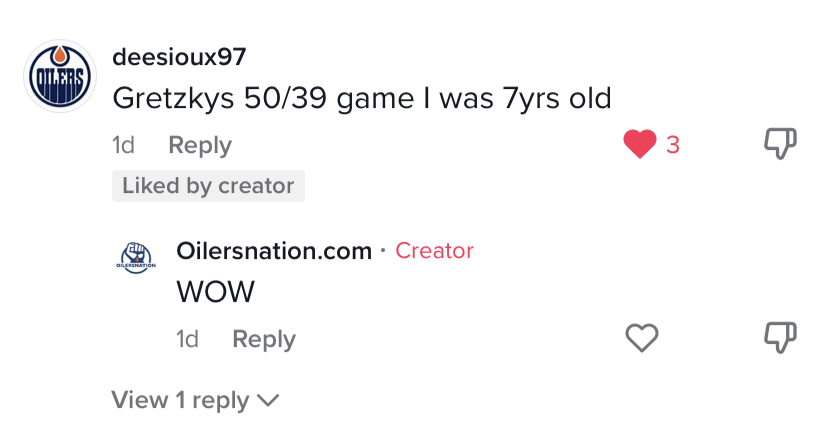 Hard not to mention Eberle’s goal of the year back in 2010. What a party that would’ve been a part of, especially to start off the 2010-2011 campaign. The beginning of HOPE in the early 2010s. Really feels like that season peaked right when it started when you look back at it. Can’t forget about Steve MacIntyre’s fight vs. Raitis Ivanans.

Bringing it back to a game just this past year. Another very enjoyable game. The Oilers were up 3-0 early in this one. Felt like a blowout was on the cards. The Detroit Red Wings had other plans and made it a battle! We’re not going to talk about the goaltending or defense in that game.

Throwback to 2011 when Ryan Jones netted his first hat trick. One of those random games where the player you least expect to score a hatty does it. Big shoutout to Ryan Jones who was a fan favourite during the Decade of Darkness. Even during the dark days, we had some fun ones to attend! As in the soccer world, Ryan Jones is a player the streets won’t forget.

Talking about hat tricks, how about a double hatty?! This was a year where the Oilers, unfortunately, missed the playoffs, but even when they were out, they still had games to remember! Now it’s rare to see one hat trick in a game but two?! Rogers Place was ROCKING! The Oilers seem to have many memorable games against the LA Kings!

Two games that I feel should be honourable mentions. Yakupov’s knee slide and Hemsky’s goal against the Dallas Stars. Yakupov mostly because of how the ending of that game unfolded. The goal was waved off, the fans raged against the officials. I still don’t blame Yakupov for the knee slide, especially with the chaos that happened prior. Hemsky’s blew the roof off of Rexall Place and a goal that’s been replayed for YEARS! Nothing beats a final second goal to tie or win a hockey game!
Oilers Talk
Recent articles from Woz