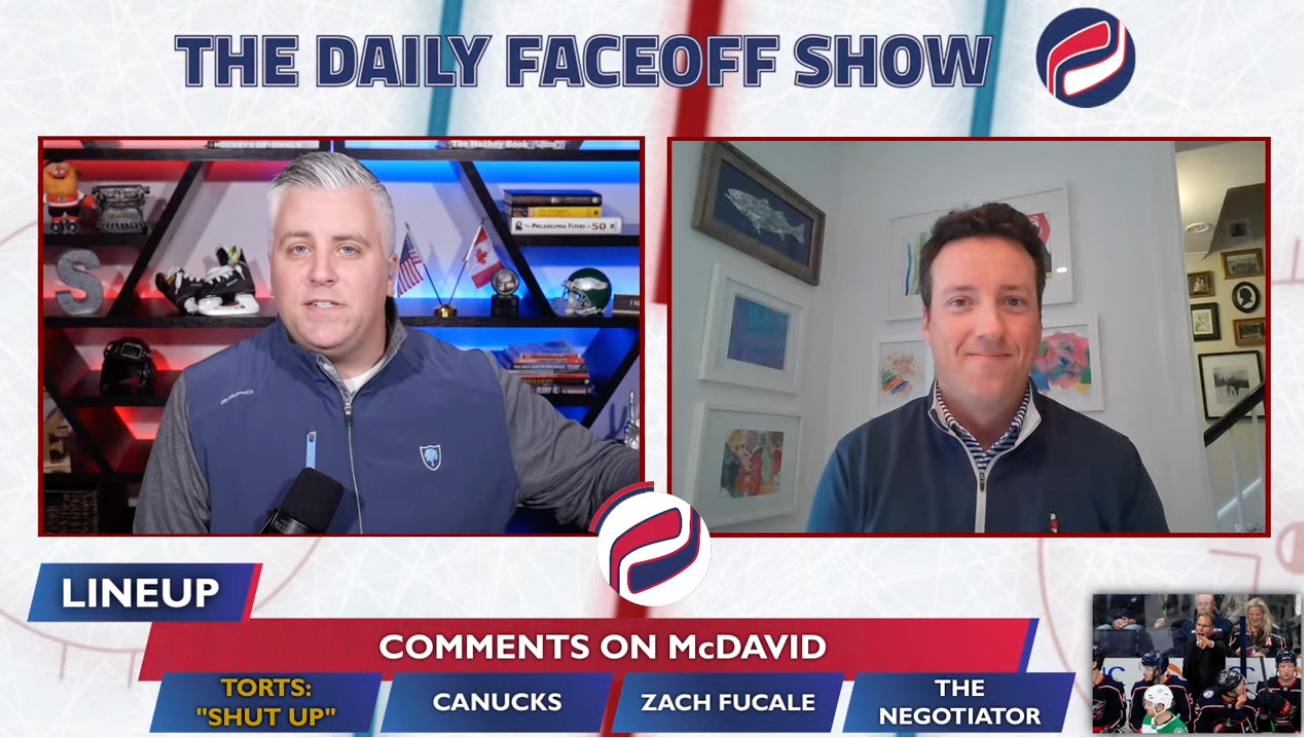 By Cam Lewis
1 year ago
The talk around the league today is focused on Connor McDavid and the penalties that refs refuse to call.
This has been a story for quite some time, but, last night on ESPN, John Tortorella offered a suggestion to McDavid, which is that he needs to shut up and keep playing through it.
On Friday’s edition of The Daily Faceoff Show, Frank Seravalli and former Buffalo Sabres assistant general manager Steve Greeley talked about Tortorella’s comments and the whole McDavid situation. They both agreed that the refs are doing the Oilers and the game a disservice by not properly calling the rules…

Seravalli: “Some high-level analysis from John Tortorella. I can’t believe this is the guy ESPN is putting on the air to break down No. 97. There’s a lot to unpack here.
We had Tim Peel on last week to talk about some of the calls Connor McDavid is already missing this season on the ice. The fact that he’s 209th in penalties drawn per 60 minutes since May 1 boggles the mind yet he continues to produce. What’s going on here?”
Greeley: “I wish you could make my face the mind-blown emoji.
How can we go after McDavid changing his game? To me, we want every player, every prospect to be more like Connor McDavid. We don’t want Connor McDavid to be more like another player. This is the best player in the league. What do we want different? This is a generational player and I get the complaints, I see him getting tripped.
I’d love to see Torts on Edmonton’s bench and watch how quickly his tone changes.”
Seravalli: “I imagine at that point Torts would stop telling McDavid to shut up and he would be the one that voices a lot of those complaints so that Connor McDavid wouldn’t have to take it upon himself.
Greeley: “We know McDavid has the puck more than anyone and he’s going to continue to create scoring chances but it’s on the refs to call these.
Every single night, we’re going to see this player going to the net for opportunities and I compare it sometimes to the NBA. The superstars get the calls because they have the ball. It’s the same with McDavid. Whether he draws five penalties a night or two, you have to call them. Give Edmonton power plays, this is part of the game, and he earns them.
Seravalli: “And not only that, let’s see that historic Oilers power-play at work. We want to see that unit on the ice as much as possible.
I don’t care how big the difference in calls is per game. This shouldn’t be an even-up scenario. If they’re earning the calls, they need to get them. Period. End of story. Simple as that.”

You can watch the full episode here, with the reffing talk starting at 3:20…
Nation Takes
Oilers Talk
Recent articles from Cam Lewis