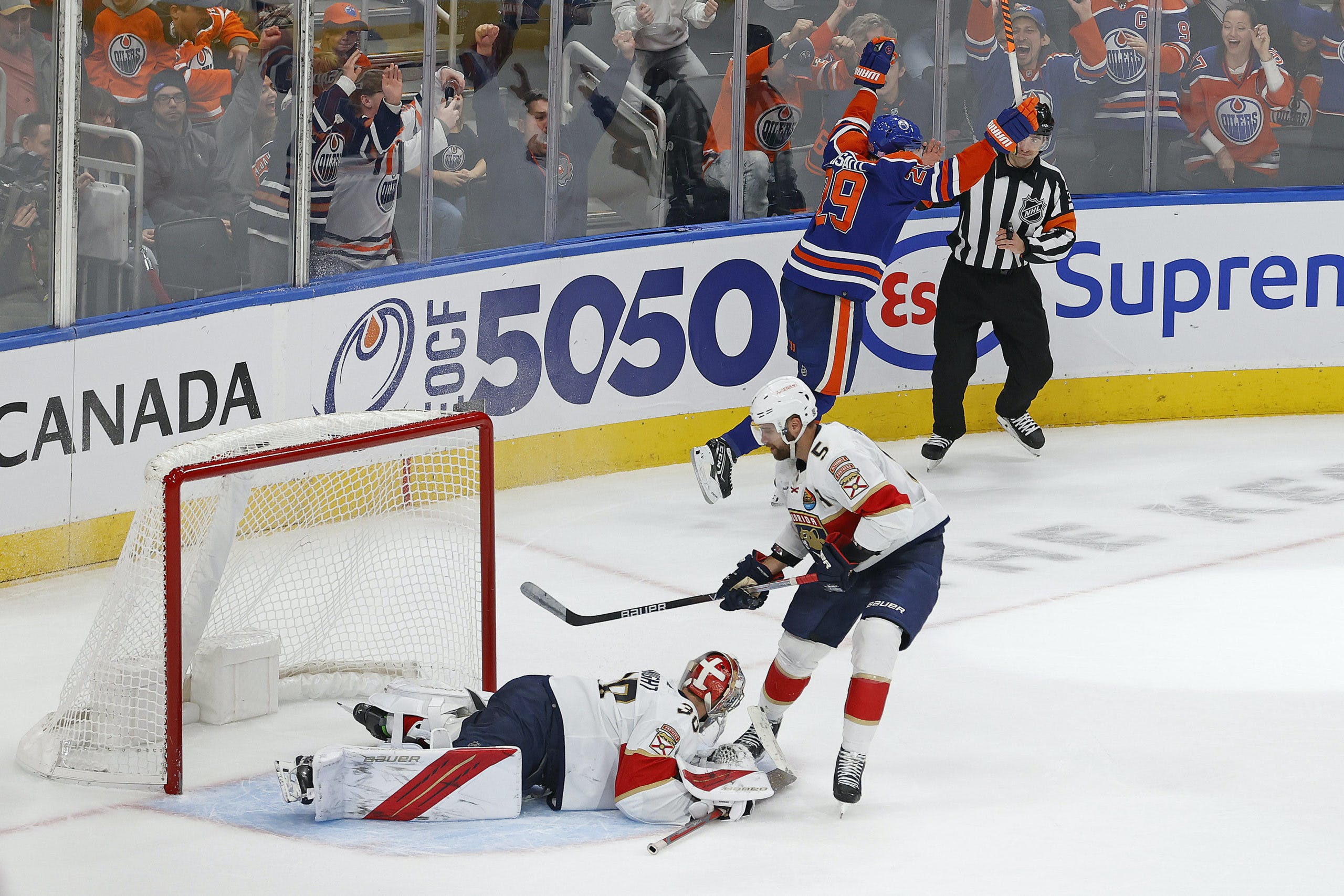 By Zach Laing
1 month ago
The Day After is brought to you by NHL betting site Betway!
The sounds of sweet irony sang true Monday night in Edmonton.
Matthew Tkachuk got the first laugh — a game-opening goal 3:49 into the first frame taunting Edmonton Oilers fans with the Hulk Hogan hand to the year.
But 20 seconds into overtime, Tkachuk blew a tire in the Oilers’ zone allowing Connor McDavid and Leon Draisaitl to head the other way. You can imagine what happened next.
In front of a hometown crowd on a night where local boy James Hamblin made his NHL debut, the Oilers played a tight defensive game — something that has been few and far between 22 games into this young NHL season. The final five minutes of regulation? Well, not as hot.
At the end of the day, the Florida Panthers are one of the NHL’s best teams. One of the highest-volume shooting clubs. And even without captain Sasha Barkov in the lineup, they’re still a tremendous team.
The Panthers came into the matchup as the league’s best shooting team averaging 40 shots on goal per game. Last night? They took just 28 — a 30 percent decrease of their typical volume. It’s a big reason why, The Day After, we’re sitting here talking about back-to-back, come-from-behind victories against two great teams.
The defence, and another stellar performance from Stuart Skinner, kept the Oilers in the game letting them bide their time like a shark in the water.

Halfway through the second, McDavid smelt blood and struck. Catching the Panthers penalty killers on a change, McDavid found a spot and caught a bomb of a pass from Zach Hyman. All alone, a quick move to the forehand beat Spencer Knight upstairs. Edmonton fended off a push by the Panthers heading into the third frame, before they struck again.
This time it was Tyson Barrie. He found the rebound off a Brett Kulak point shot banging it home. 2-1, and the Oilers were feeling good.
While Anton Lundell scored at the 10:58 mark on a defensive miscue by the Oilers and Brandon Montour scored even after a review determined Tkachuk didn’t high-stick a puck, the Oilers stuck with it. Right down to the final seconds.
The Oilers net empty. A draw to the left of Knight. Draisaitl battles off the draw, but the puck stays neutral until it floats out. There’s McDavid, who grabs it and spins and fires a tape-to-tape pass to a lurking Evan Bouchard.
Five seconds left. Back of the net. Pure elation.
While the Oilers almost let it slip away, they clawed back for the second straight game. Turning point? Let’s hope so.
Zach Laing is the Nation Network’s news director and senior columnist. He can be followed on Twitter at @zjlaing, or reached by email at zach@oilersnation.com.
Featured
Nation Takes
Oilers Talk
Recent articles from Zach Laing