The Day After 8.0: Oilers mount multiple comebacks — including one against referees — to down Blackhawks 6-5 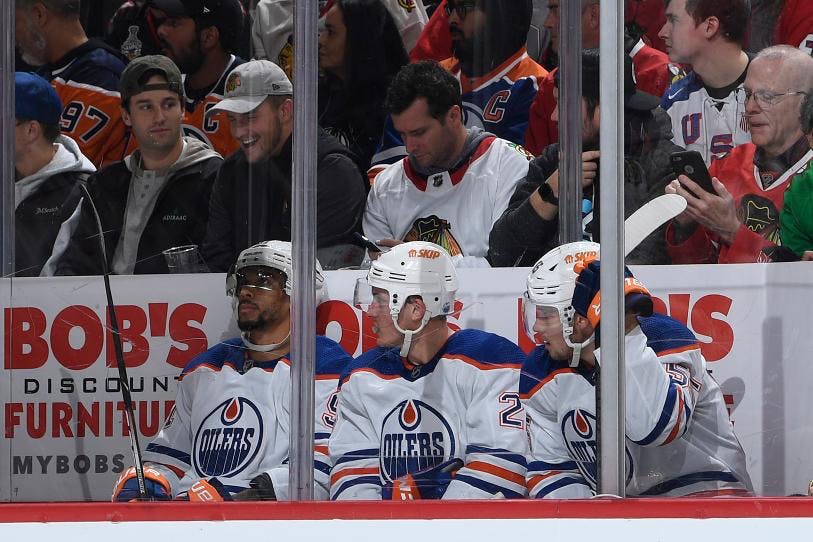 By Zach Laing
2 months ago
The Day After is brought to you by NHL Lines site Betway!
What on earth was that game?
Quite frankly, an absolute embarrassment of a game by the referees. I like to give them the benefit of the doubt as much as I can, but there are some questions that need to be answered after the Edmonton Oilers toppled the Chicago Blackhawks .6-5-
In total, there were 40 penalty minutes called with a staggering 17 (!) powerplays given. At the end of the day, a Connor McDavid hat trick and an unreal game-winner from the birthday boy Leon Draisaitl led them to victory.
While the Oilers still managed to fight the adversity and come out on top, a brutal non-call of an Evander Kane goal late in the second nearly flipped the game on its head. With four minutes left in the second period, Kane was battling in front of the Blackhawks’ net and got knocked into goaltender Alex Stalock.
Kane popped up, getting out of the way of Stalock, only for the netminder to make a save and Kane to bang in a rebound. The referee at the side of the net called it a goal, but the referees huddled and all of a sudden, the call on the ice was no goal?
A subsequent challenge from Oilers head coach Jay Woodcroft was unsuccessful, and the Oilers were sent to the penalty kill. Kane, clearly frustrated, took an unsportsmanlike penalty seconds later, and the Blackhawks scored on the 5-on-3.
While the Oilers could’ve folded, they instead turned on the jets. Ryan Nugent-Hopkins scored 24 seconds into the third to make it 4-4 and then McDavid cashed in his hat trick goal 10 minutes later. Things looked great heading into the final minutes, before Patrick Kane scored off a rebound to tie it up once again.
As the final minute hit, it was Evander Kane who threw a beautiful cross-ice pass to Draisaitl in his office who made no mistake in finding the back of the net.
There were a lot of things to like from that game. The Oilers showed their ability to overcome deficits of 2-1, 3-2 and 4-3 on the road on the second half of a back-to-back. Say what you will about this team, but they’re damn resilient.

No matter how resilient they may be, things clearly need to get cleaned up from the goal line out. Weird game with terrible flow aside, Jack Campbell and the Oilers still allowed five goals. You never want to single out any single player on a night where there were as many penalties as there were — and with only 33:11 played at 5×5 — but you want to see a little bit more.
Campbell’s now had three games above a .914 save percentage (.917 against Vancouver, .952 against St. Louis, .917 against Pittsburgh) and a sub-.900 save percentage in three games (.636 against Calgary, .900 against Carolina, .861 last night). I’m very much willing to write this game off for Campbell because that game was an absolute nightmare front to back, but there’s undoubtedly some work to do here.
The defence — well I don’t know what’s going on back there. There’s a lot that needs to be worked out with that group, and it needs to be figured out sooner rather than later. In the brief time at 5×5 in the game, the Oilers controlled 58 percent of the shot attempts and 56 percent of the scoring chances — both great numbers — but they allowed seven high-danger scoring chances against while getting one, and controlled a meager 38 percent of the expected goal share. That’s far from pretty.
Above it all, the Oilers came out with two points and are now 2-0 heading to Calgary tomorrow to close out a three-game road trip. At worst, the Oilers will finish this trip with four of a possible six points, and you’ll take that any day of the week.
Zach Laing is the Nation Network’s news director and senior columnist. He can be followed on Twitter at @zjlaing, or reached by email at zach@oilersnation.com.