The Day After: Oilers season ends a resounding success 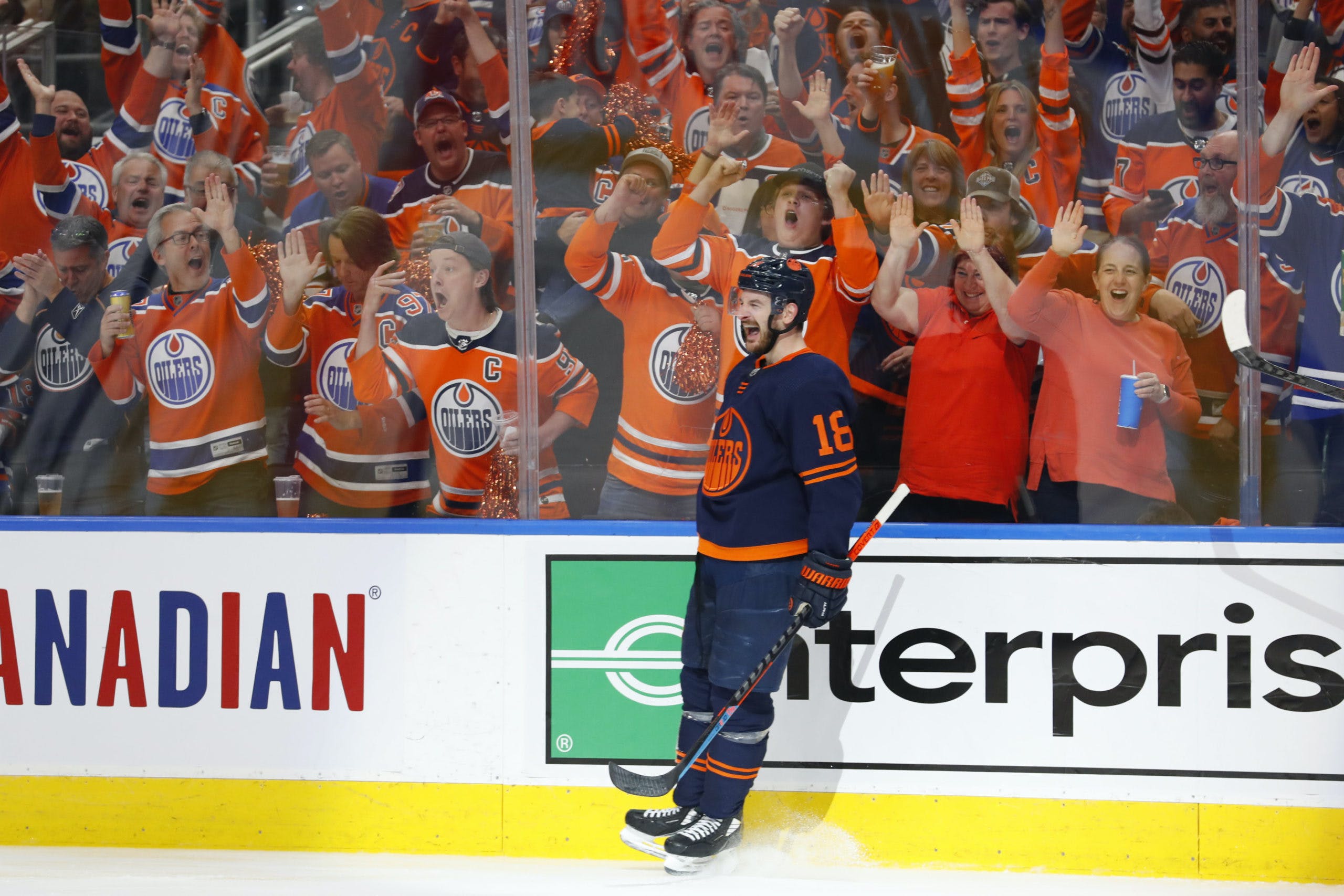 By Zach Laing
7 months ago
How about that ride in?
Who would’ve thought eight months ago we’d be sitting here, on June 7th, talking about the Edmonton Oilers playing in the Western Conference Finals.
While the team would say otherwise, there were few who believed this team would have the ability to be one of the last four teams standing. Through more than a fair share of adversity from the highs of a 16-5 start, to the lows of a 7-13-3 stretch right after, to Jay Woodcroft and Dave Manson coming to town to right the ship and go on a run, this year was nothing short of a success for the franchise.
The Oilers laid it all out on the line, figuratively and literally, and gave a superteam in the Colorado Avalanche the best they had.
“There was no give up, or people not fighting to the bitter end.,” said Woodcroft after the game. “Our group pushed as hard as we could, we emptied the tank with everything we had.”
“We’re playing hockey on June 6th. In order to accomplish that and be one of the final four teams, you’ve done some good things,” added Woodcroft. I don’t think we can lose sight of that. There’s a lot more required in order to find a way to get to the Stanley Cup final, and there’s more required to win the trophy.
“But, I go back to that date on February 11th, a healthy margin outside of the playoffs. We asked that group of players to play hard for each other. To sacrifice. To commit. And we’re not here today if that group didn’t do that. I’m proud of our people.”
No matter how you cut it, no matter how the season ended, this year had so many positives to take from it. They made it to the Western Conference Finals. Dispatched in four by the Stanely Cup favourites all year long or not, these Oilers deserved to be here.
“I think it showed our younger players that you mentioned like, Bouch and Clouder, they took big, big steps this season,” said Leon Draisaitl after the game. “It’s great to have young guys like that go on a deep run like we did and learn how hard it is and understand how hard it is.
“Both of them, all of them, they’re going to come back next season a little older, a little more experienced, they’ll be better. That’s going to push our team big time.”
It’s the experience of being down 3-2 to the LA Kings and having to win two straight to close the series, one of which being on the road. It’s the experience of dropping an embarrassing 9-6 loss to your division rivals, only to dominate in four straight to close out those same foes in five games. It’s the experience of losing four straight to the Avalanche.
It’s these moments that have seen the Oilers get over the hump. Be ready for that next step. They learned from their faults against Anaheim, and Chicago, and Winnipeg. They’ll learn from this one too, and come next year, they’ll be that much more ready for the next experience.
All the while, they’ll be led by the most potent offensive duo the NHL has seen in 30 years — Connor McDavid and Leon Draisaitl. The pair had another tremendous night Monday with 97 scoring a goal and two assists, while 29 casually put up four assists, each of them primary.
With the 16 playoff games all but wrapped up for the Oilers, McDavid finishes with 10 goals and 33 points, while Draisaitl finishes with seven goals and 32 points. 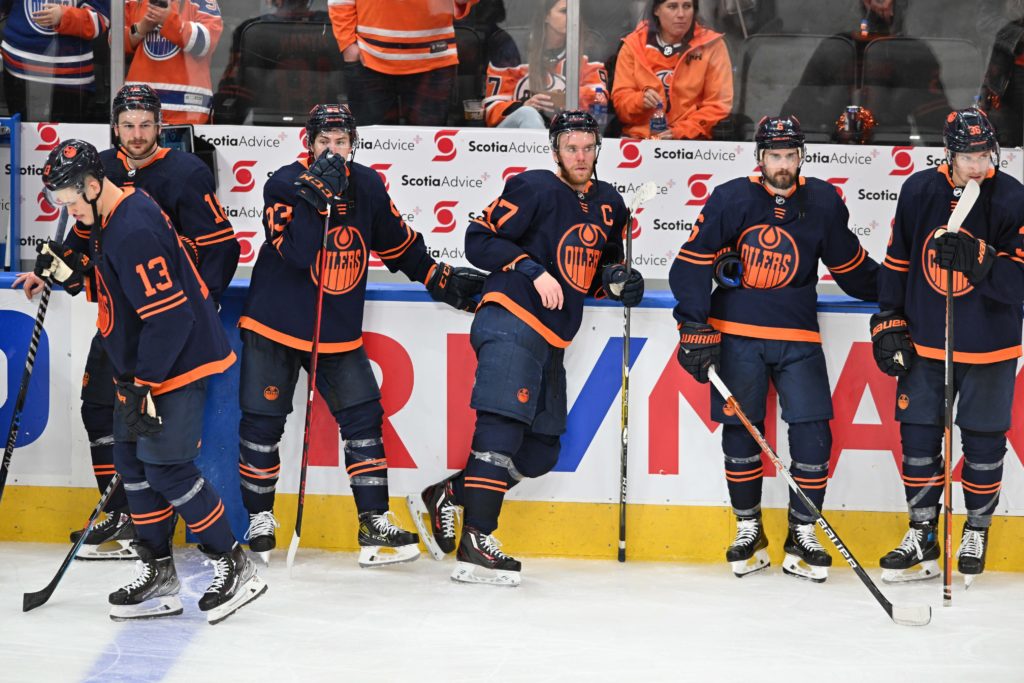 Jun 6, 2022; Edmonton, Alberta, CAN; Edmonton Oilers take on the Colorado Avalanche in game four of the Western Conference Final of the 2022 Stanley Cup Playoffs at Rogers Place. Mandatory Credit: Walter Tychnowicz-USA TODAY Sports
While Edmonton had a tepid start to the game spotting Cale Makar and the Colorado Avalanche a 1-0 lead 3:46 in, they fought back mightily.
Zach Hyman scored twice. Ryan Nugent-Hopkins and Connor McDavid found the net. Zack Kassian sent the game to overtime. This all the while Colorado fought back from 3-1 and 4-2 deficits.
Edmonton fought threw it all — abysmal reffing included — to even stretch it to overtime. Credit where it’s due.
With the third line up for their first shift of overtime, the Oilers lost a draw in the defensive zone with the puck returning to the Avs’ point. As Darren Helm moved the puck to Makar, Duncan Keith lost a battle for positioning to Arturri Lehkonen. The latter got a clear lane towards the net, where he tipped Makar’s point shot down to the ice, picked up a rebound and tucked it home.
“It was a 50/50 faceoff. We got beat to the net. The puck got tipped and they found a way. We’re not here without the people you are referencing,” said Woodcroft of the goal, referencing the questionee’s ask of the Oilers’ personnel on the ice.
At the end of the day, the game-losing goal was almost a microcosm of the issues that plagued the Oilers in this round. They just couldn’t win the battle when it mattered the most.
Brad Malone lost the draw. Colorado got possession.
Keith got out manned. Lehkonen had the lane to the net.
Nobody could get in the shooting lane. Makar’s shot was able to be on net.
Smith couldn’t make the save. The rebound was there.
C’est la vie.
“We’re hungry. We’re a hungry group,” said Darnell Nurse after the game. “There’s a long, long road to get back into the playoffs next year, then the grind begins. There’s a grind to get through 82. There’s another grind to get through one series, another grind to get through the next one.
“Our group is just hungry to… you know, it sucks. It stings. We didn’t get the job done we wanted to get done. We got a hungry group that knows you can take steps, but you got to follow it up.”
Now, the work starts for the 2022-23 season.
Zach Laing is the Nation Network’s news director and senior columnist. He can be followed on Twitter at @zjlaing, or reached by email at zach@oilersnation.com.
Nation Takes
News
Oilers Talk
Recent articles from Zach Laing