The Day After: Whoaaaaaaaa we’re halfway there! 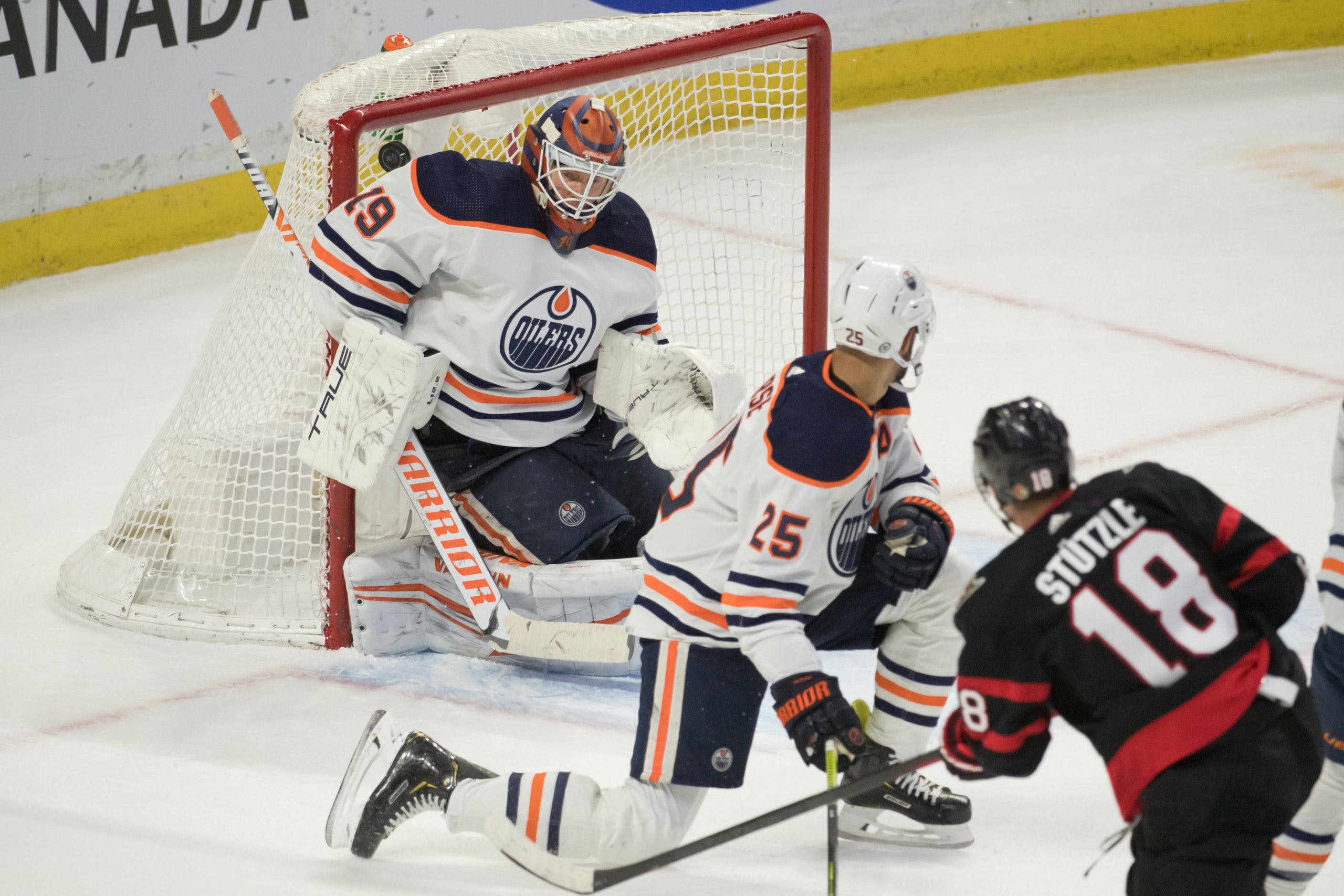 By Zach Laing
9 months ago
Point! Final score: Sens 3-2.
Hard to believe we’re already at the halfway mark of the season.
And it’s hard to believe the Oilers didn’t walk away with two points last night.
They played a strong game controlling the pace of play almost all night, but they just couldn’t capitalize on their chances. It’s a tale of the first half of the year, in a sense.
The early going saw the Oilers doing a lot of it. The powerplay had been red hot and it seemed like every shot was going in. Then, things cooled off. The Oilers had all the looks, but they just couldn’t buy a goal if their lives depended on it.
Last night, it was a bit of both. They scored twice making the most of some beautiful plays. Evan Bouchard stretched the ice to Connor McDavid whose Gretzy-eque half-slapper beat Matt Murray five-hole. Then, in the third, it was Darnell Nurse capping off some beautiful passing that kept the game close.
But there were a handful of other great chances, too. Zach Hyman had a breakaway that he couldn’t capitalize on, Evander Kane drove hard to the net but nobody could bang in the puck, as well as other moments where the players just gripped their sticks a little too tight.
“You gotta keep at it, keep pounding away at it,” said head coach Dave Tippett after the game. “There’s always little parts of the game you want to be better. There’s players who can play a little better, there’s things you can work on, your special teams. we were minus one on the special teams.
“There’s always things to work on. We like our team. I think we’ve got a good team. We have to keep pushing ahead and I think it was a winnable game. We could’ve capitalized on some chances, we didn’t, so we move on.”
No matter how you cut it, the Oilers ran into another hot goaltender. Murray stood on his head when he needed to save nearly a whole goal above expected — the difference-maker in the 3-2 loss.
It’s one the Oilers can hang their hats on, however. They beat up on these Senators last year winning all nine matchups. As Nurse noted after the game, that’s something teams don’t forget.
“They’re going to be hungry right?” said Nurse after the loss. “Last year we came out and won every game. In this league, you don’t forget those kinds of things.
“They came out and played their structure really well. For us, we want to get both those points.”
Nonetheless, the page turns to what will be tough game against the Washinton Capitals. Then, a wee break.

Stuetzle puts finishing touches on Senators’ overtime win
If Tim Stuetzle could do it all over again, he probably wouldn’t have dropped the gloves for his first NHL fight midway through the third period of a tie game.
That performance, though, coupled with his shortside overtime game winner a few minutes later, has added another piece to the growing fan appreciation for the Senators 20-year-old sophomore star.
“Maybe it was a little stupid to get in that fight (against William Lagesson), especially that late in the game, but I kind of got aggressive there, trying to stand up for myself,” said Stuetzle, laughing at himself while sporting an ugly red gash over his left eye that took four or five stitches to close. “It got the team going there.”
Once he returned, Stuetzle ended the night by scoring with 37 seconds remaining in extra time. It was a highly entertaining overtime following a highly entertaining third periods of regulation. Oilers stars Connor McDavid and Leon Draisaitl barely left the ice in overtime and had had their share of chances throughout.
Senators goaltender Matt Murray once again delivered to run his current hot stretch to 4-0-2. Murray faced 39 shots, including three in overtime. – Ken Warren, Ottawa Sun