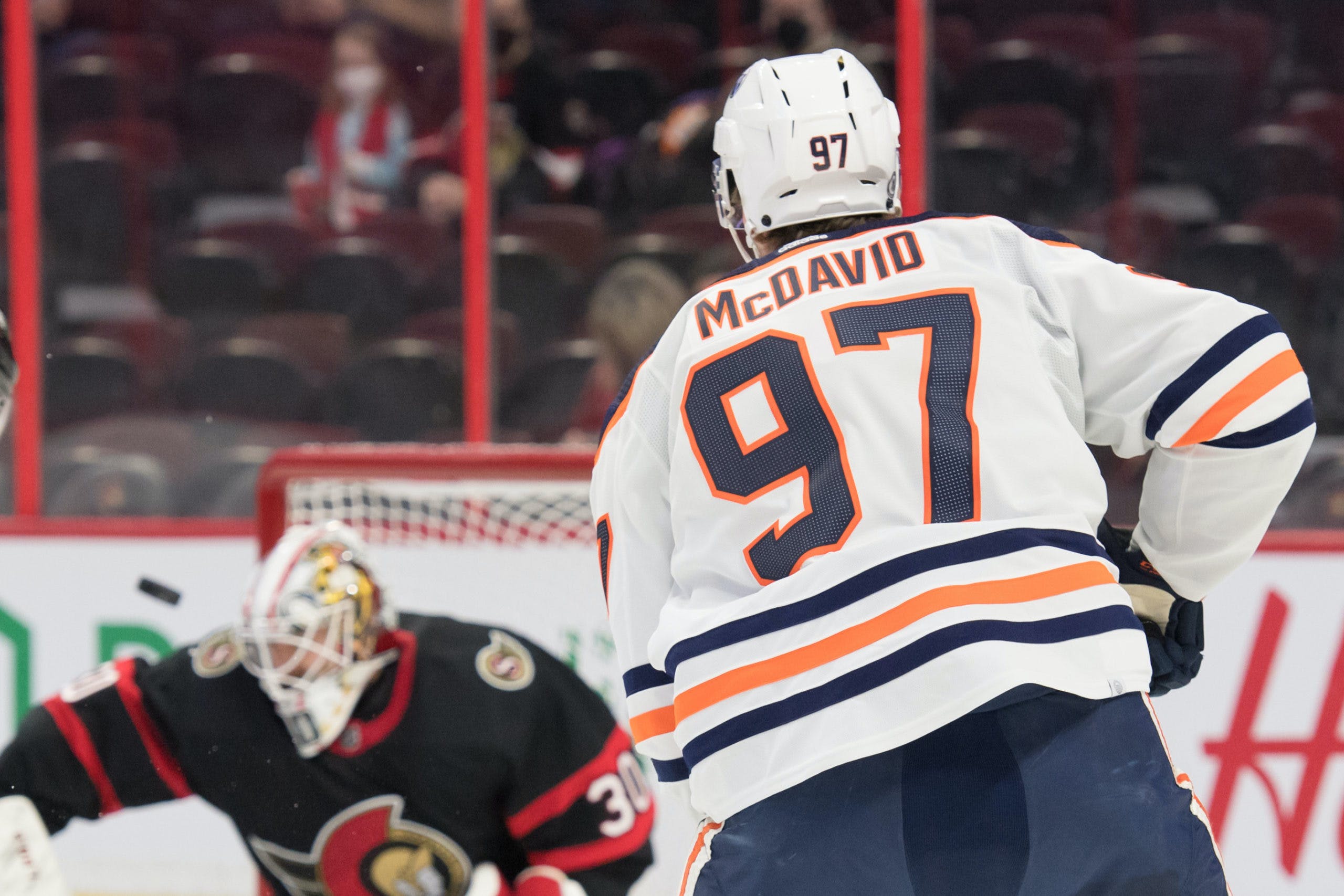 Photo credit: Marc DesRosiers-USA TODAY Sports
By Zach Laing
10 months ago
Comments
A new OilersNation gameday post has emerged!
What better way to wrap up a night’s game by looking at all the goals scored, and what the players and coaches had to say.
Tonight, the Oilers fell to the Ottawa Senators 3-2 in overtime. BaggedMilk has the wrap-up here.

the sens jump out to a 1-0 lead with a weird one, but connor mcdavid's half-slapper ties it up at 1 shortly thereafter. pic.twitter.com/T3jfytCBZe

nick paul on the powerplay and the sens regain their lead. pic.twitter.com/aJYasDZPMg

tic-tac-toe! nice passing between zach hyman, derek ryan and darnell nurse, the latter who finishes off the play. 2-2. pic.twitter.com/aQfrFzecJN

tim stutzle with a snipe in overtime and the sens win 3-2. pic.twitter.com/i417vpAKAw

“It’s disappointing we didn’t get the other point there. I don’t know if we played well enough through 60 minutes to deserve a win in my opinion, but good on us to battle through, stick with it.”
Advertisement
Ad
Advertisement
Ad
“It was a game of momentum for sure. I thought we gave them a little too much momentum at times, then we took over at times. I think it’s a matter of putting together a full 60 minutes. I think we were a little inconsistent in our game.”
On maybe overlooking an injured team: “I think it’s a possibility, I don’t really think that was the case tonight. We knew they were going to come hard, we knew what kind of game they were going to bring. I don’t know if we matched their intensity for 60 minutes.”

“I thought we put ourselves in a pretty good position to win. They played well though through the neutral zone, trapped it up. It forced us into some mistakes in the neutral zone. I think we did have enough chances, but they had a good game.”
Advertisement
Ad
Advertisement
Ad
“I think we probably could’ve had another step up in our effort. especially in the middle of that game. With that said, we found a way to get a point and we haven’t done that much lately. We go onto Washington, a really good formidable opponent.”
“Matt (Murray) made some great saves on the other end. In times where we probably could’ve went up one, or found a way to get a little momentum, he made some big saves.”
On sweeping Ottawa last year: “They’re going to be hungry right? Last year we came out and won every game. In this league, you don’t forget those kinds of things. They came out and played their structure really well. For us, we want to get both those points.”
“Our next game is against a team that’s not only good this year, but good every year and have a lot of really good players. For us, it’s a good test. It’s a test against a really, really good team that we have to be up for. We have to be ready for the hardest game we’ve played in a while.”
Advertisement
Ad
Advertisement
Ad
On reaching the halfway mark of the year: “We had a good start, faced some adversity. Found a way to come out and string some games together, some wins together. We’re in a position where we’re playing really meaningful hockey in February and that’s all you can really ask for. We’ve been in positions here before where we were on the outside, the way outside looking in and the season was seemingly over. Now, this is the third year in a row where we’re playing really meaningful hockey halfway through the season. That just gets the guys going more and more. we got to make the most of the opportunity we have ahead of us. A lot of hockey to be played.”

“We didn’t finish. had some opportunities. In this league, first one to three usually can win. We didn’t get to three, they did.”
Advertisement
Ad
Advertisement
Ad
On breakaway chances not going in: “You gotta keep at it, keep pounding away at it. There’s always little parts of the game you want to be better. There’s players who can play a little better, there’s things you can work on, your special teams. we were minus one on the special teams. There’s always things to work on. We like our team. I think we’ve got a good team. We have to keep pushing ahead and I think it was a winnable game. We could’ve capitalized on some chances, we didn’t, so we move on.”
On the powerplay: “It doesn’t look like we shoot enough, for starters. When we do shoot we miss the net a lot.”
On tinkering with lineups mid-game: “You get in a game like that you’re trying to find something that might work. You like what some players are doing, maybe some guys aren’t having as good of a game as you think, you’re just changing the chemistry a little bit. We needed some players to make some plays. Derek Ryan jumped up there and made a great play to get us back in the game. Every game is different.”
Advertisement
Ad
Advertisement
Ad
On reaching the halfway mark of the year: “It’s the halfway mark in the tale of two halves. That’s what it is.”
On the schedule tightening up: “We’ve talked about it already. We know what’s coming. We’ll be prepared for it. There’s a lot of teams with games in a short amount of time, the teams that missed games. We’re one of them so we’re going to have to make them up. We get a little break over the weekend, then come back and get ready to go. I think there’s eight games in 13 days coming out of it, so it will be a challenge.”
Zach Laing is the Nation Network’s news director and senior columnist. He can be followed on Twitter at @zjlaing, or reached by email at [email protected]
Advertisement
Ad
Advertisement
Ad