The Day After: Skinner shines as Oilers down Jets 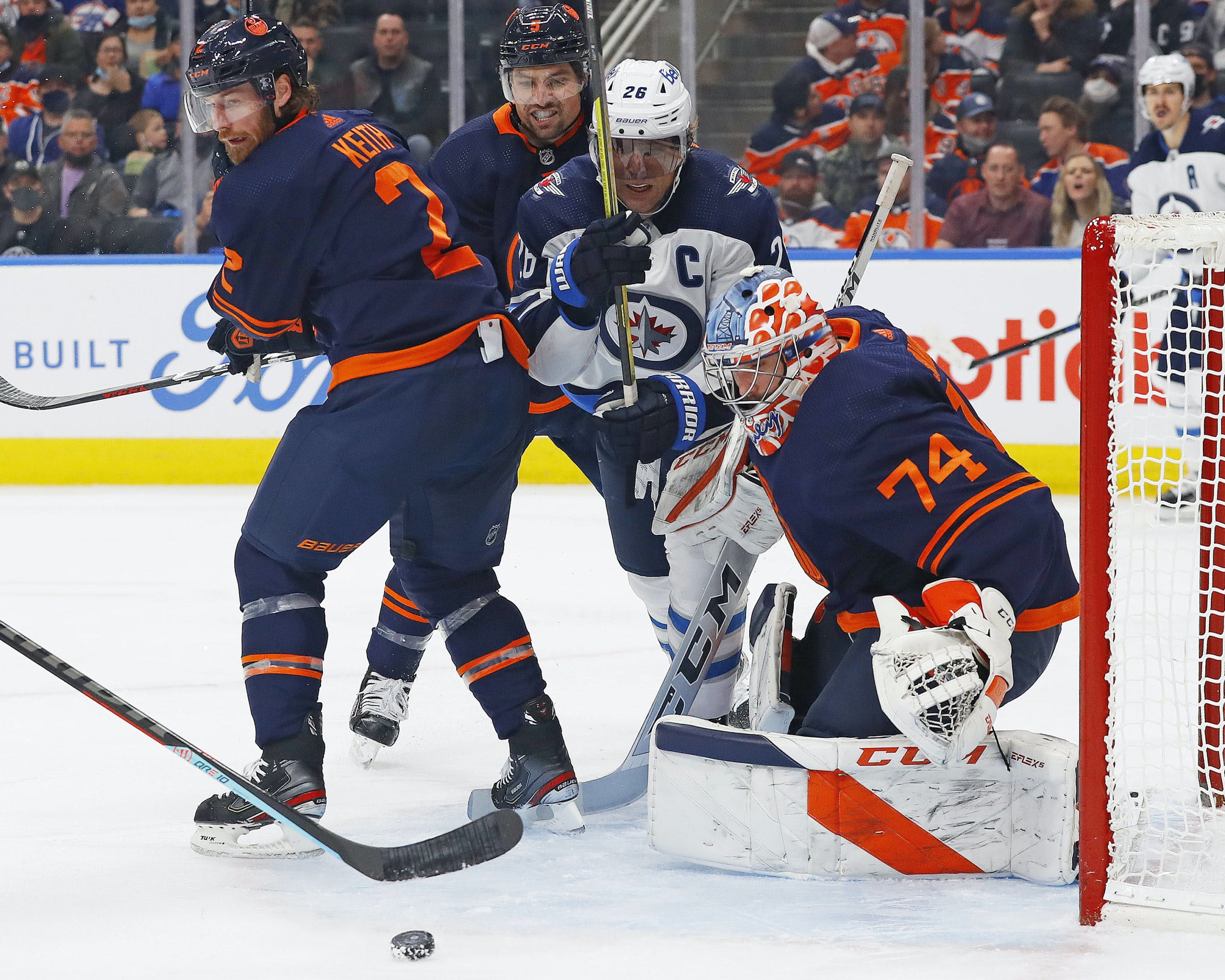 By Zach Laing
1 year ago
When the going gets tough, the tough get going.
And boy, was Stuart Skinner going.
The Oilers rookie netminder turned aside an impressive 46 shots Thursday night as the Edmonton Oilers exacted revenge beating the Jets 2-1 in a shootout.
For the Oilers, there was no bigger star than Skinner.
“He looks like an NHL goaltender and plays like an NHL goaltender,” said Oilers head coach Dave Tippett after the win. “Tonight was a really good challenge for him coming off a tough game in Winnipeg (Tuesday).
“We needed a good performance from our goaltender and he stepped up. He was not just good, he was really good. Right through to the shootout. Good for him, he’s worked hard and he has waited for his break to get in there. Tonight he did a heckuva job.”
It’s been a long road for Skinner. Drafted in the 3rd round in 2017, the Edmonton native has played 80 American Hockey League games and 44 ECHL games, he’s waited for a long-time for this day.
And when it came, he was more than ready.
“It was an exciting game. It was a hard-fought battle all night between both teams,” said Skinner. “I think it was huge to get that goal to tie it up then the kill in overtime really got us momentum going into the shootout and we were able to capitalize. It was huge we got the win.”
Edmonton didn’t want another start like they had over the last two weeks. Far too often the Oilers allowed early goals and opponents to get into games. Last night? No so much.
The Oilers controlled 58.5 percent of the expected goal share in the first frame and while that number dipped by the end of the night, it helped start the game off on the right foot. While the Oilers did give up an overwhelming amount of shots — 46 by the league’s count — Edmonton did a tremendous job of limiting them.
In total, just 11 Jets shots on net came from high-danger areas.
Skinner’s tremendous play gave the Oilers a chance to stay in the game all night but three quarters of the way through the third, Nik Ehlers blasted a long shot home that Edmonton’s goaltender likely didn’t see.
But just 34 seconds later, Connor McDavid did Connor McDavid things dancing through a number of Jets and roofing a shot to get the Oilers back in the game. With 45 seconds left in the third, however, McDavid was off to the box for a four-minute high-sticking call.
Queue Skinner. He helped weather the storm while Leon Draisaitl, Ryan Nugent-Hopkins and the Oilers defenceman worked to take the pressure off. Edmonton killed the penalty and forced a shootout. There, McDavid and shootout specialist Kyle Turris found the back of the net while Skinner turned away Kyle Connor and Mark Scheifele.
The 2-1 win was just what the Oilers needed. Skinner looks every part of a goaltender who can play in the NHL. Now through four games played this season, he’s posted a 1-2 record, a .939 save percentage and saved 2.46 goals above average — tidy work.
His performance Thursday may earn him some more starts, too.
“When he plays that well, he’s earning more starts,” said Tippett. “He’s a young player trying to establish himself in the league. Schmiddy is going to be out for a while, this is a great opportunity for him.”
With Edmonton’s next game Saturday night, I wonder if the Oilers look to give Skinner another start.

BILLECK: Connor McDavid spectacular again as Oilers beat Jets in shootout
No one expects two of the NHL’s offensive juggernauts to play to a low-scoring tie through 65 minutes, needing the shootout lottery to solve it.
But that’s what happens when the men manning the crease for the Winnipeg Jets and Edmonton Oilers put forth a goaltending masterclass on Thursday night at Rogers Place.
Connor Hellebuyck and Stuart Skinner produced a sensational show in a 2-1 win for the Oilers, a result that would have been unfair no matter how lost after each put on respective clinics at each end of the ice.
“You know, I thought both teams were really good,” Hellebuyck said. “I don’t think it was just a goaltender battle and I think every person on both teams was playing well. It almost had that playoff feel to it and it was a grinder. Two good teams going at it.”
Connor McDavid and Kyle Turris scored for the Oilers in the lottery, while Kyle Connor and Mark Scheifele both missed on their attempts
“Oh, it was a good game. It was a hell of a game,” Jets head coach Paul Maurice said. “It had all the right elements for hockey, right? It had a little bit of physicality and it had lots of skill and lots of smart, hard play. It was a heck of a game. I really enjoyed that one.”
Skinner, Edmonton’s third-stringer working as the backup with Mike Smith on the shelf injured, finished with an incredible 45 saves to end Winnipeg’s three-game winning streak.
“And I don’t think he was lucky,” Maurice said. “I thought he made saves. He was good. We got traffic there, too, and we had people at the net and we had some fine shooters coming down on him and he made some good saves, just like our guy did, yeah.”
Hellebuyck made 31 saves for the loss. He’s 6-0-4 in his past 10 starts. – Scott Billeck, Winnipeg Sun