The Day After: Hyman robbed of hatty as Oilers topple Penguins 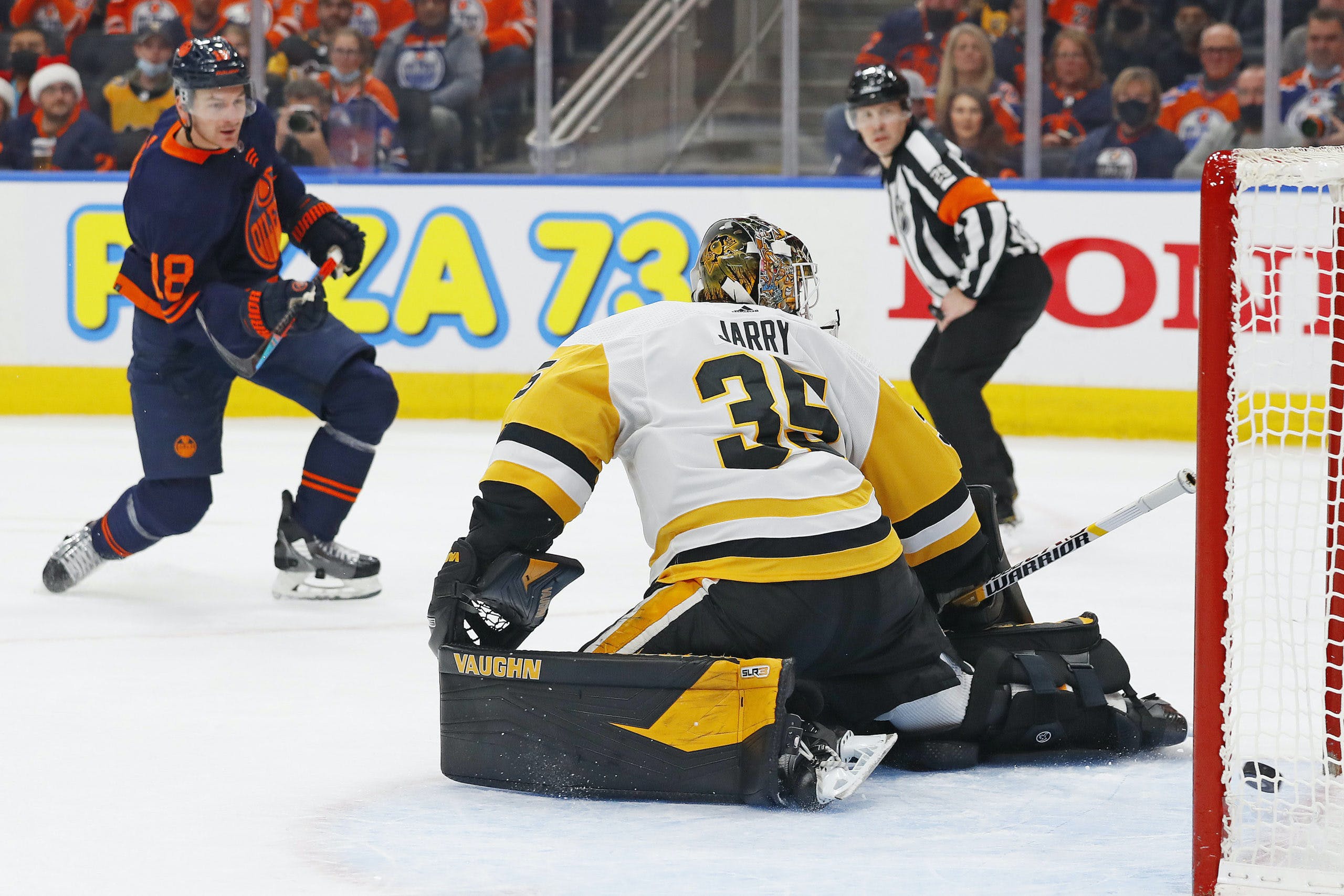 By Zach Laing
1 year ago
If you ask anyone in Edmonton, Zach Hyman scored his first-ever NHL hat trick last night.
The NHL, however, felt that Kailer Yamamoto jumped a hair offside negating the goal. But the two Hyman did get played a big part in the Edmonton Oilers 5-2 win over the visiting Pittsburgh Penguins.
It was far from pretty with a depleted blueline that had four players with a combined 75 NHL games, but the Oilers got it done.
“He had no chance to get it to me, I told him to put it in, finish the game, and we’ll get another one another time,” said Zach Hyman after the game, referencing Connor McDavid trying to find him for an empty net goal at the end of the game.
“I don’t think about it too much, I think it will eventually happen. I’m happy to score when I can and help the team win. it was fun almost getting the hat trick there.”
Hyman got the party started with two tallies in the first yet the Oilers somehow managed to fall asleep through 40 minutes with the game tied at 2.
Head coach Dave Tippett, meanwhile, loved what he saw from the first-year Oilers forward.
“We should have a few of our players stop looking at the iPad and start looking at Hyman out there,” he said. “He plays the game honest, he plays the game hard. We talk about getting our nose over the puck and competing for loose pucks, he’s the epitome of it.”
Edmonton remembered what was on the line, however, taking control of the game in the third period and securing the win. With the win, the Oilers hold the NHL’s best points percentage at .762. They also moved one goal back of the highest-scoring team in the league with 82 tallies on the season.
The truth of the matter is that the Oilers really had no business in winning that game. Goaltender Mikko Koskinen shut things down in the second for the most part in a game that could’ve easily slipped out of the grasps of the Oilers.
Mistakes were made all around, and part of that, at least, was due to the Oilers fielding a young defensive corp.
“We were better in the third. We turned the puck over far too much in the first couple,” said Oilers head coach Dave Tippett after the game. “We had no rhythm to our game — we were batting it around like a tennis ball.
“I think (the young defencemen) did their part of it, there was a lot of batting going around. They weren’t all of it, but were part of it. We had some veteran defenceman bat it around pretty good too.”
All in all, it was about as big of a win as the Oilers could ask for and things aren’t going to get any easier. Edmonton heads to Seattle for a Friday night game against the Kraken — one that won’t see any defensive reinforcements arrive — before a six-game homestand that sees some highly competitive teams roll through the 780.

Penguins drop latest showdown between superstars Crosby and McDavid, 5-2
There’s just a different kind of energy in the air on the rare occasions when Sidney Crosby and Connor McDavid share a sheet of ice.
Rogers Place was buzzing Wednesday when Crosby and McDavid, arguably the two greatest players of this century, went rush for rush late in the first period.
The crowd rose to its feet when McDavid cruised down the ice but couldn’t blow by Brian Dumoulin. Crosby, sensing an opportunity to one-up the kid who came for his throne, tried to dance through a pair of defenders at the other end.
“Loving to compete, the part that you enjoy about the game is the challenges every night. Obviously, he’s one of the biggest,” Crosby said of McDavid on Tuesday. “You play against guys like that, I think it brings out the best in everybody.”
The marquee matchup certainly brought the best out of McDavid. The reigning MVP had four points as his Edmonton Oilers scored three goals in the third period to beat the Penguins, 5-2. It was the third straight loss for Pittsburgh.
Entering Wednesday, Crosby and the Penguins were 6-0-1 against McDavid and the Oilers in seven showdowns between the two superstars. Three years ago, Crosby stole the show in this building when he scored a sensational overtime winner.
“I think Sid has changed his game since he’s been in the league,” McDavid said after Edmonton’s morning skate. “He came in as a pass-first guy. Then he wanted to get better at faceoffs. Now look at him, he’s a great faceoff guy. He wanted to score more goals. He’s a 50-goal scorer and a Rocket Richard winner.” – Matt Vensel, Pittsburgh Post-Gazette